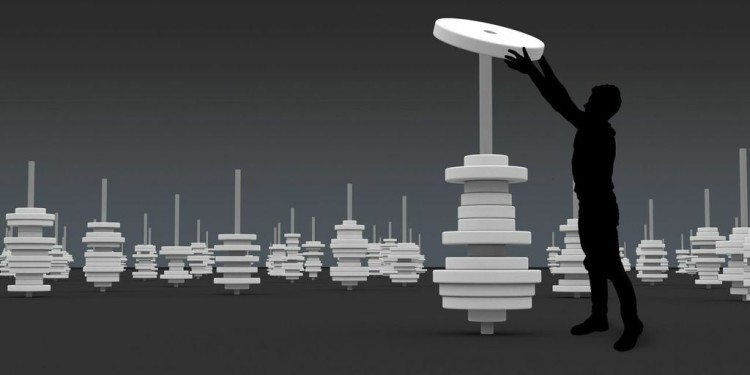 Whoa. Perhaps it was at Coachella when twelve hundred of the seven-foot PizMob Zygote balls flew down from the skies and onto the audience during the Arcade Fire encore. As you stared and screamed and leapt, the magical balls lit up and changed colours to the Wake Up beat.

It might have been at the Vancouver House during the 2010 Winter Olympics, when you typed your comments about our city into the glass-topped keyboard. Your words were transformed into a digital ribbon that made its way down the long, long table before lighting a LED chandelier bedecked with 101 globes created by origami master, Joseph Wu.

Or it might have been last night at FUSE, when you wiggled your head up into the Experience Sphere. To passers-by, you looked like The Mekon. Inside, you were engulfed in a multi-sensorial world.

Whoa. It is a word that is used both to stop people in their tracks and to express wonder. Fitting that it is also a word that Alex Beim likes to hear people blurt when they interact with the installations from his Tangible Interaction team. “People are so distracted all the time. You’re here, but you’re thinking about what you have to do, what you already did. The goal across all the work we do is to bring the person to the moment, to inspire them to be completely present and to have them say: ‘Whoa. What is this?”

The whoa and wonder starts at 1000 Parker Street. If you wind your way through this artist’s enclave and up three flights of stairs, there you will find the unassuming Tangible Interaction door. Creak it open and you’ll discover a space that stretches back, Perkin’s tent style, to house works in progress, muraled walls, bibs and bobs from projects past and engrossed staff – software engineers, architects, designers – cooking up their digital magic. There are more Tangible wizards in Uruguay, Sudbury and France. “We all work together. There is no ego. Each one has a specialty, but we work side by side.”

Beim started doing interactive installation work in 2006, formally creating Tangible Interaction in 2008. But, his interest in making cool things dates back to his childhood in Uruguay. “When I was young, I would make airplanes. I liked the experience of making something that worked, that I could play with.”

He started delivering mail for his Dad’s event planning business – “my Dad was a very creative man” – when he was 12. But, it was the work of the graphic designers that interested him, so he asked his Dad if he could design a poster for his next event. “Sure, give it a go,” his Dad said. Alex enjoyed it so much, he decided to start his own graphic design studio when he was 19.

Beim and a friend also started a magazine – Diseñador – focused on graphic design in Montevideo, a rather rare craft at the time. “It was a business challenge. We were two guys in our early twenties with no money. We made it happen all out of donations – the paper mill donated the paper, the printing company donated the printing.”

But, Diseñador and the booming graphic design business were tossed aside for love. Alex first met his wife Natacha – now a Top 40 under 40 entrepreneur who started the innovative cefa schools – when they were both 15. “I fell in love with her. I told her we were going to get married one day.”

Natacha came to realize that Alex’s teen prediction was right, but they hadn’t spoken for years and she was living in Canada. She called, they spoke and Alex moved to Canada three weeks later. They were married within six months. By the time he got his working papers, Natacha was pregnant. “The day I got my papers, I sent out four hundred emails with my portfolio.” By the next morning, he had six scheduled interviews and was soon designing websites at ACT 360.

Beim worked his way through a couple of gigs and up into the role of Associate Creative Director at Tribal DDB. “I was doing design and creative for advertising online. Websites, banner ads, video scripts, working with animators.” He enjoyed the creative work, but noticed that he wasn’t as passionate about advertising as some of his colleagues. “I felt I wasn’t contributing by doing that – pushing stuff. I also didn’t like that I was designing stuff for people, but I wasn’t seeing it. I wanted to do something that would bring a smile to people, to truly connect to them in some way.”

He pitched some of his interactive installation ideas at work, “but it was too early, too weird.” Beim started to dream up magical projects in his spare time and, in 2006, finally got his break when his Zygote Ball prototype submission was accepted to the Arrezo Wave festival in Italy. “Zygote balls are large, inflatable balls. We throw them at the audience and they light up when people play with them”

After months of planning, prototyping tips from Physics Engineering whiz Jon Nakane and a near-catastrophic loss of his project luggage in transit, Beim finally introduced his zygote balls in Florence. People were filming, word got around and suddenly he got a call that The Chemical Brothers wanted to do a zygote ball drop at a concert in Bucharest. 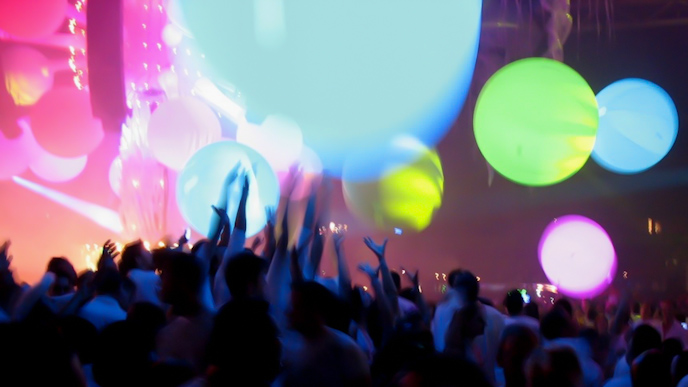 Off to Romania he went, and the demand for his projects and artwork flourished. “It took awhile to make the leap. I didn’t know if it had a future, if I could make the money that we needed to maintain a family.” But, in 2008, Beim finally quit his job and dove full time into Tangible. Soon after, the Blue Man Group contacted Beim and came to town to check out these Zygote Balls. They incorporated the glowing orbs into their finale “and now we are in seven shows around the world.”

Tangible Interaction was involved in sixteen projects during the Vancouver Olympics. Seed of Truce was commissioned by the Governor General of Canada and installed at the Vancouver Public Library. Visitors jotted down their ideas about peace on white pieces of paper, which they folded into origami shapes and clipped onto little LED lights that were “beating like a heartbeat.” They brought their peaceful musings to a forty meter vacuum tube that jetted their white ‘seeds’ up to the library rafters. The origami shapes would “twirl like maple seeds” as they floated down into a large net. Over time, the library atrium was filled with thousands of peace-related thoughts.

Other work has been featured at Science World, SXSW 2014, The World Ski & Snowboard Festival, Swatch, the Richmond Olympic Oval, Chanel NYC… How does Beim come up with his ideas? “I don’t know. I’m hit with a feeling: wouldn’t it be cool to do this? I’ll sketch it out and run it by people right away. I get really excited about stuff like that and it gets a little contagious. I want to see it live immediately, so we’ll start building prototypes.” 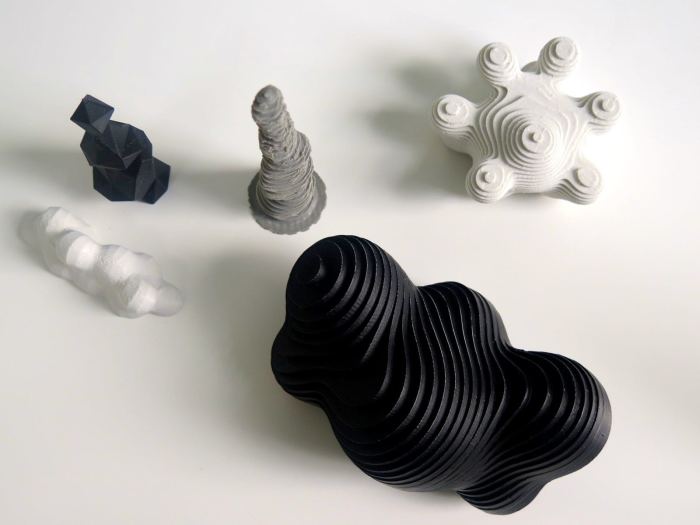 “I’m better at the ideas than the execution,” says Beim, but he knows that the Tangible team will run with it beautifully. Clients, in turn, have come to trust the group, even as the idea morphs into something different than they originally discussed. “I’ll explain the changes to them and they’ll say: ‘Alex, you don’t need to tell us.’ They have complete trust in what we do. It’s amazing.” 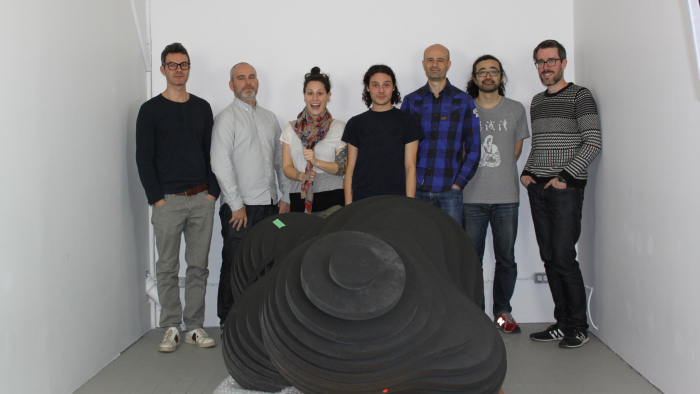 The work in progress above is called Visitor, soon to be featured in a secret location. “The original idea was very different than this, but they are completely fine with the changes. It is a piece for kids, so we crafted a bit of a story about a visiting alien. Nobody understands what it is, then you have to see how to interact with it.” Visitor is made from ultracore and will be adorned with sensors and custom LEDs.

The Tangible team is also busy at work on a huge light sculpture they are making for the new Tractor restaurant, soon to open in the Marine Building. They produced its 700 copper-plated dowel connectors on 3D printers. Next to be added are 50 LED tubes. The sculpture is entitled Mikado, after the European pick-up sticks game. As Tractor is a family-owned business, the Tangible Interaction team gave the owners a handful of pick-up sticks to customize as they wish. Their family stick creations will be incorporated into the final piece.

As someone who so firmly believes in the importance of the here and the now, Beim is not one to obsess about what is around the corner. “I’m just so happy doing what I do. Today, tomorrow, next week…I don’t have a big master plan.” What we do know is that Beim and his Tangible team will continue creating the whoa reactions that give us pause. “We are so busy. Right now, we are doing four pieces that are all due at the same time. It’s kind of crazy.”

Most photos courtesy of Tangible Interaction