Not to worry; the neighbourhood is safe. Van Wormer is an in-demand make-up artist with credits ranging from Twilight to Star Trek Beyond. “Films like Star Trek are like Christmas for make-up artists.”

On Star Trek, Wormer was working under the leadership of the Oscar-winning Joel Harlow. “There were around 53 different species of aliens on that one. I got to help work on a five-piece silicon alien. There would be a neckpiece, a face-piece, a couple more face-pieces and a top of the head. Our job was to puzzle them onto the actor and fill in all the edges.”

“My best day was when I got to do a Spock stunt double. I was gluing ears on the stunt double while Zachary Quinto was at the other end of the room getting his ears glued on. Yup. I can die now!” 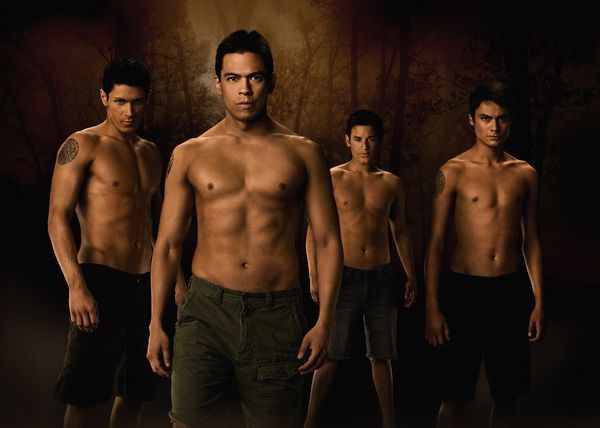 Another highlight was working on The Twilight Saga: Eclipse. “That was a huge deal for me at the time, partly because I was a big fan of the books. It was also the first time I was getting to work on a really big team on a big feature film. I took care of all the Wolf Pack, other than Taylor Lautner. I did their body make-up – airbrushing their abs on. I became very popular with the wolf boys!”

To put on the wolf abs, Van Wormer used a product called Skin Illustrator. “It’s a matter of having a light hand with the airbrush and creating a shadow. You don’t want it to look like hard lines that have been drawn on. You also have to find just the right shade for each person’s skin.”

“Could you make me a woman?” It was Mrs. Doubtfire that convinced a young Van Wormer that she had to become a make-up artist when she grew up. “A lot of make-up artists say that. Watching all those different makeovers on Robin Williams. I remember watching that scene and saying I have to do that.”

During high school, Van Wormer practiced her make-up skills on friends going to parties. “Everyone would have to lay down on the bed with their head on my pillow. I was surprised when I got to school and saw people getting their make-up done in an upright chair!”

‘School’ was Blanche Macdonald, where Van Wormer completed her make-up studies. “My first job after was working at a local theatre in Chilliwack. It was a really neat experience. A lot of these actors had been performing for 20 or 30 years. I had two hours to get 15 people ready, every day for two weeks.”

To get experience in the film industry, Van Wormer worked her first job for free. “I ran into an old friend who knew someone who was a make-up artist and needed an assistant. It was a really low budget film. I didn’t get paid for weeks; I was starving to work on the film. I was excited when I finally got a paid job.”

Since then, Van Wormer has enjoyed the creativity and teamwork that comes with working on set. “Sometimes, you go into a make-up blind. You’re given a lot of products, shown the end-goal and told: ‘Here! Make this work!’ Those are opportunities to do some of your best work. On the Spock day, I wasn’t given a lot of instructions. Just, make it look like Zachary Quinto.”

Van Wormer’s work offers her a broad range of make-up briefs: from beauty through horror. Below is her beauty work in a Cate Cameron photo of actress Peyton List in The Tomorrow People. 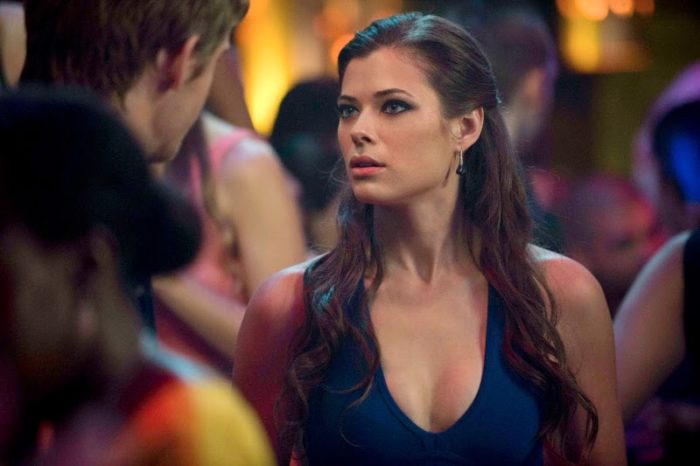 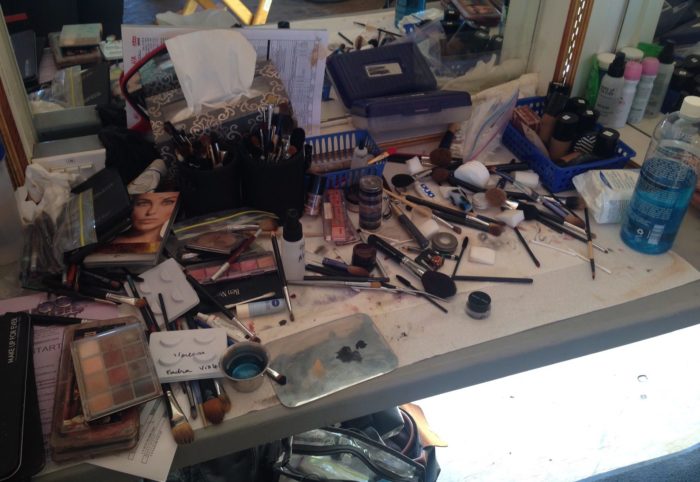 In her work, Van Wormer is working closely with the actors. “One of the films that always stayed in my mind was Personal Effects – an independent feature with Michelle Pfeiffer, Ashton Kutcher and Kathy Bates. I got to do Kathy Bates’ make-up. It was cool working with someone of that caliber. She was so professional. I was only 25 or so, running a make-up department. A lot of the time, actors wouldn’t trust me because I was so young. So, to have someone of her talent come in and trust me was such a big thing for me.”

Complicated special-effects can mean hours in the make-up chair for the actor. “There was one character we did on Star Trek. His whole head was covered in silicone appliances. Some days were six hours. It was summer and we were out in Pitt Meadows in a gravel pit, ten feet below sea level. It was so hot for us in our shorts and t-shirts. Imagine how it was for people with silicone all over their heads. You have to be so patient, keep the actors calm and comfortable.”

Sometimes, despite all the best efforts, actors can get overwhelmed mid-application. “It can screw with their brains a bit. I’ve seen people flip out. Years ago, I was working on a film called Percy Jackson where there were zombies in full silicone masks. We had a guy get claustrophobic and start to rip the mask off his face. He would have damaged his skin and a mask worth thousands of dollars. Several make-up artists came over and tried to help him. You have to be compassionate.”

Here is Wormer applying make-up to one of the more relaxed zombies from Percy Jackson: Sea of Monsters. 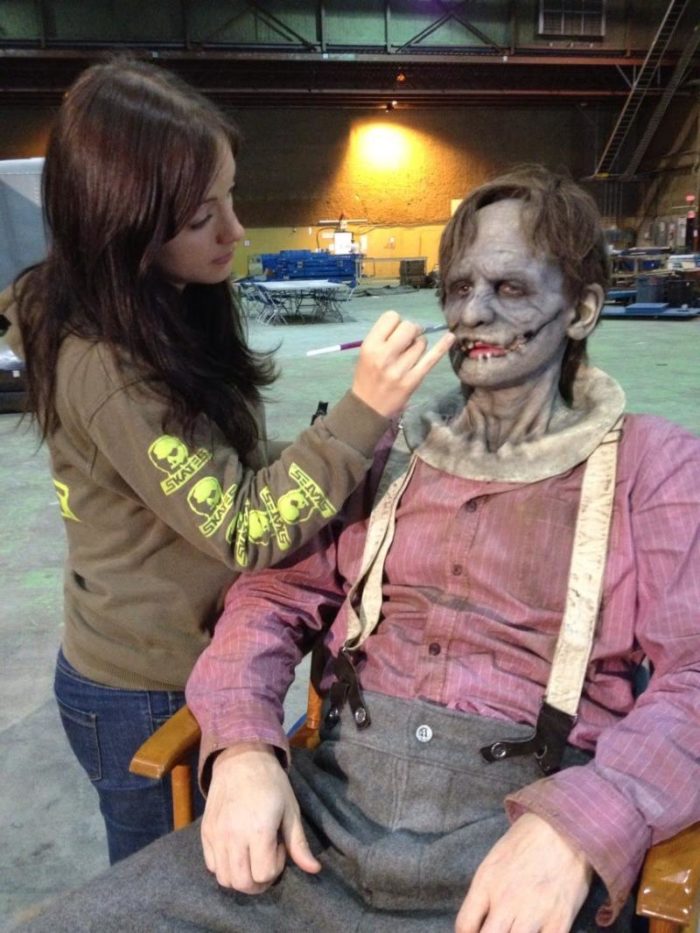 As a make-up artist, Van Wormer must also be painstaking and patient in her work. Certain body parts, like the ever-moving neck, can be particularly challenging. “I’ve applied vampire bites, tattoos, even a large appliance on the back of someone’s neck because it’s supposed to look like you could plug this person in. The prosthetics have to move with the neck and the glue at the edges can start to move. If you had to glue that onto a forearm, you’d be having a much easier day!”

It can be stressful for Van Wormer to watch her work onscreen. “I’m so critical of my work. It’s really hard to make blood, bruises and cuts look organic, scary and realistic. In this light, it may look good, but they shoot it from different angles. All you can do is pray that they used the take you wanted.”

It is helpful for Van Wormer to study blood in real life, but it is not something she enjoys. “A couple of years ago, someone got hurt. They were ok. I wanted to see how the blood runs, but I could feel myself getting dizzy and having to look away. When I’m doing really intense blood, if I start to gross myself out, I know I’ve done a good job.”

As a teacher at Vancouver Film School, Van Wormer enjoys passing on the film industry techniques she has learned over the years. “I find it incredibly rewarding, helping these passionate people learn and apply these skills.” 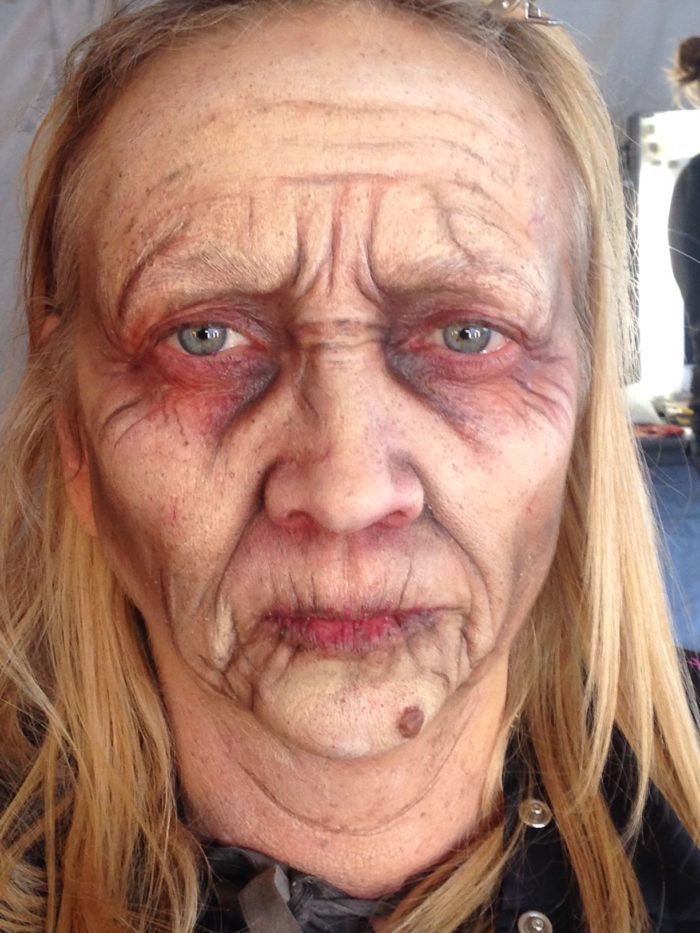 Leave the ego @ home.
“You need to be open and willing to learn. If I’m running a make-up department and someone comes in with a lot of ego, I can’t work with them. You need the ability to bend and sway in lots of different situations.

Be willing to work for free @ the start.
You’ll make connections with people. Once you do, maintain them. The big make-up artist you meet is going to forget about you; she meets lots of people. Keep in touch.

Fine-tune your skills.
Pour yourself into every art form and develop every skill you can. Take art classes. Learn about colour; learn about photography. Fill yourself with as much knowledge as you can – there is so much available. That’s how you edge out the competition.

Develop your people skills.
Makeup artists are a dime a dozen now. Personality sets them apart.

Be bold.
Cold-email people. Connect with them through social media. They might be happy to talk to you, but you won’t know unless you go after it. 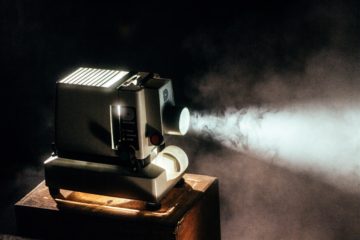