When the rain is unforgiving and the wind raging sideways, the goal is to get to Destination A and back to the car before umbrella and spirit go to pieces. Yet, on this torrential afternoon, we did stop, turn and go back to stare at a painting in the window of the Bau-xi Gallery.

Featured was a clunky black typewriter, much like the Underwoods that clacked into the night in Dad’s den. A muddle of thought blew up from the ribbon while hard-working ink leaked down from the cage.

We brought our sog into the gallery to learn more about the artist: Andre Petterson. Petterson, we came to discover, takes photos of classic iconography – typewriters, dolls, pianos, horses – then feeds them through his painterly imagination. “I pick an item that speaks to me on some level.”

The typewriter takes him back to his Grade 9 typing lessons. It was either typing or gym class. “I’m not a sports person. I’m a drummer, so I thought that would be helpful. I got to about 40 words a minute.” This particular old typewriter he found on a trip to Cypress. It was just sitting outside on the ground, next to a nondescript building. “I picked it up, put it in the middle of the road and started taking pictures.” 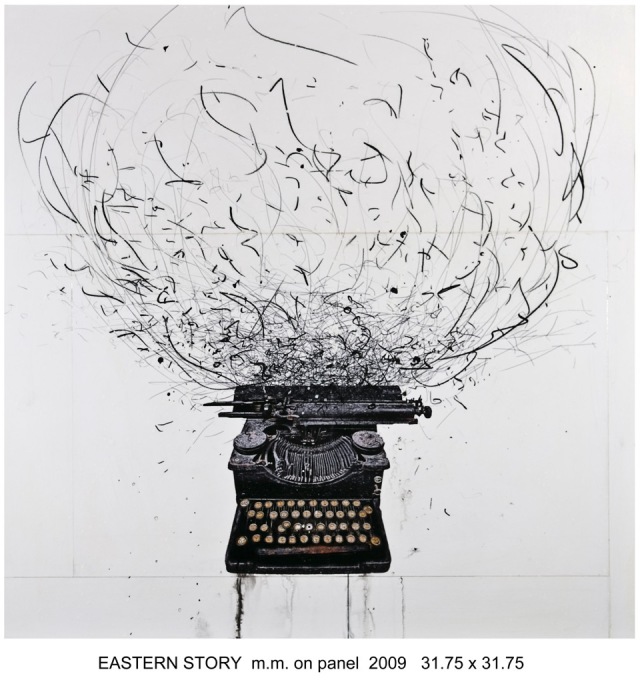 His foray into horses started with a plastic piece of junk he picked up at a toy store. He would drip paint onto the horse toy – paint animate, horse inanimate – and take photos. At the suggestion of friends, Petterson went down to Southlands and out to Langley to start taking photos of real horses, paint drips to be added later on canvas.

Once the horse owners got to know this guy with the camera, they invited him into the stables for a closer view. Horses are still one of his most successful series. 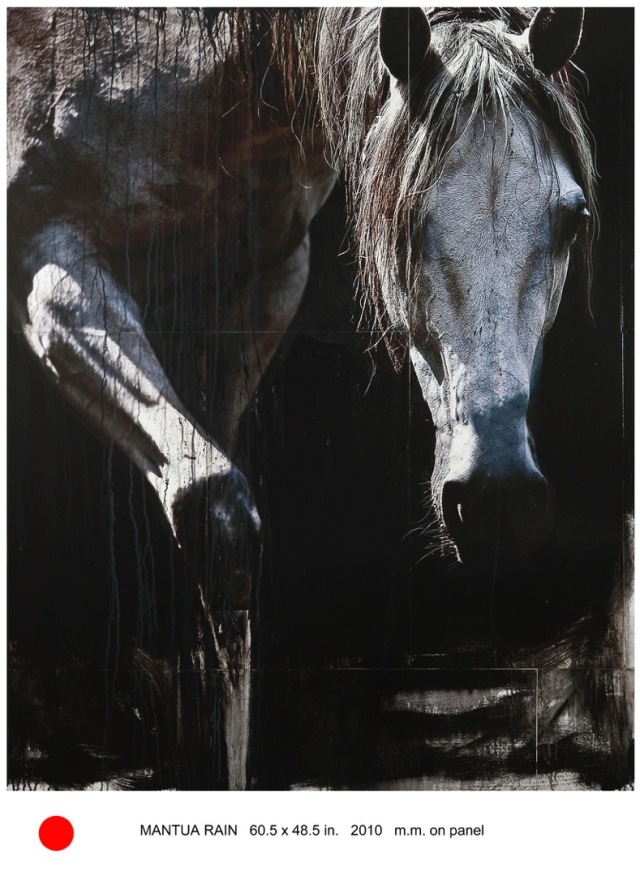 As a child, Petterson’s main creative outlet was in music – piano at age 3, drums at age 10. He joined his first travelling band at age 14. “My Dad freaked out. My Mum said: ‘he’ll be fine. Leave him alone.’ I didn’t drink. I didn’t do drugs. I have this need to be sober.”

His rock band, The Great Flood, gained a healthy following in Saskatchewan and did a lot of touring. Petterson moved to Vancouver with a nine piece jazz band, then gradually found his way into sculpture by the age of 19. “I did sculpture almost exclusively for ten years. I like to build.” Much like his machinist father.

Petterson was thrilled when Leila Getz featured one of his sculptures – a shirted figure playing the violin – on her first poster for the Vancouver Recital Society. He started getting into “dark and moody’ painting in the early 80’s: “I did a lot of nighttime, three in the morning, out the back door paintings. I would incorporate photos.”

Over the years, Petterson has had a number of creative role models. He was encouraged early on by the respected Canadian painter Otto Roger, whom Petterson met at age nineteen through his girlfriend at the time. Though an educator himself, Roger told Petterson to avoid art school. “He said: ‘you have something. You go there and that will kill it.’ I suppose he was right in that way. I don’t follow rules.” 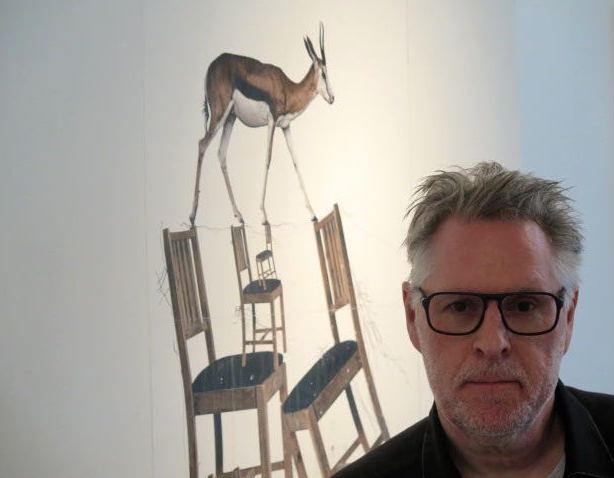 Petterson’s other artistic influences include Ed Kienholz: “an assemblage artist who built his story putting junk together. The first piece I saw of his was The Beanery in Amsterdam. He built this long skinny bar with all of these disheveled people with clocks for faces. It was quite powerful.” He also admires Anselm Kiefer, Robert Gober and Ai Weiwei. From the old world – his world as someone who was born in Holland – Petterson admires Rembrandt. “His use of light. The fact that half of the painting isn’t there.”

Petterson is inspired by his travels, particularly to China, Japan, Vietnam and Thailand. He has found great success with a series kindled by his time in South Africa. Throughout, he uses black and white as he grapples with the country’s racial tensions. 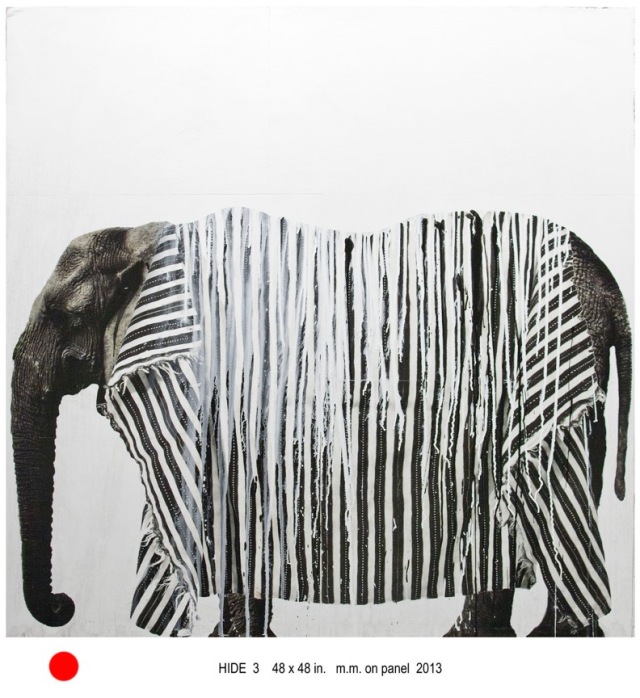 When he used to live and work in a tiny basement, Petterson listened to music – Miles Davis, Bill Evans… – while he painted. Now, in his echo-filled studio, he is fine with quiet or neighbourhood hubbub. He does have one strict requirement when he is painting: solitude. He likes knowing his wife Florence, a sculptor, is upstairs, but he needs to work alone.

Once he is done, he invites Florence down to take a look at his work. “She has a great eye. I beg my wife to give me constructive feedback, then I get mad at her for giving it!” Thankfully, Florence is a great supporter.

Yet, Petterson thrives on the exploration and the unpredictability. “I’m thrilled anytime someone wants my work. That never goes away. People say: ‘you must be jaded.’ Not for a second.” 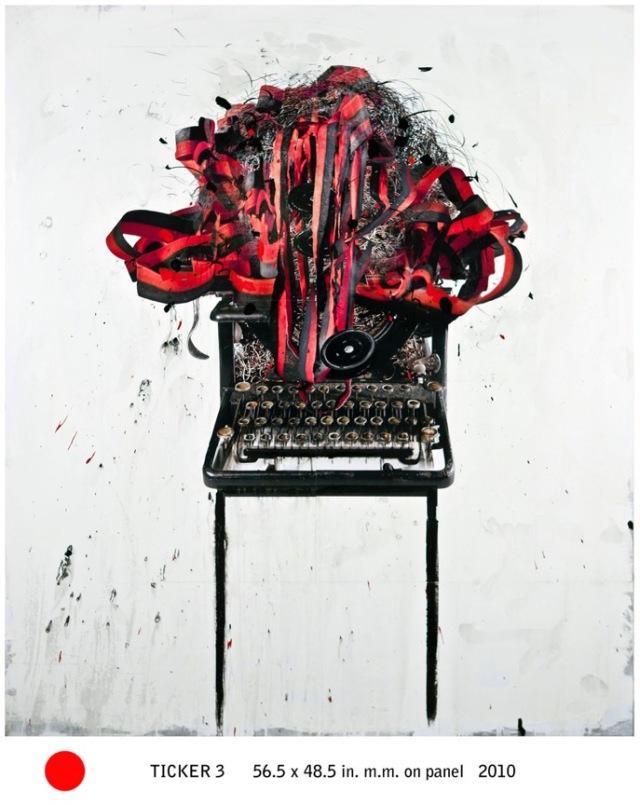 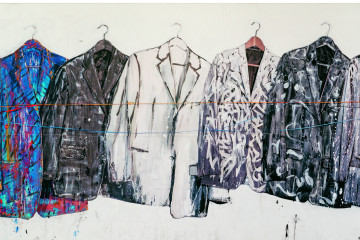 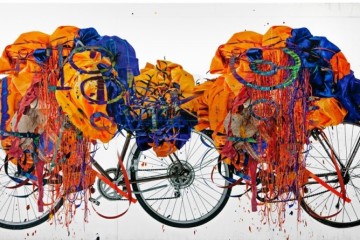