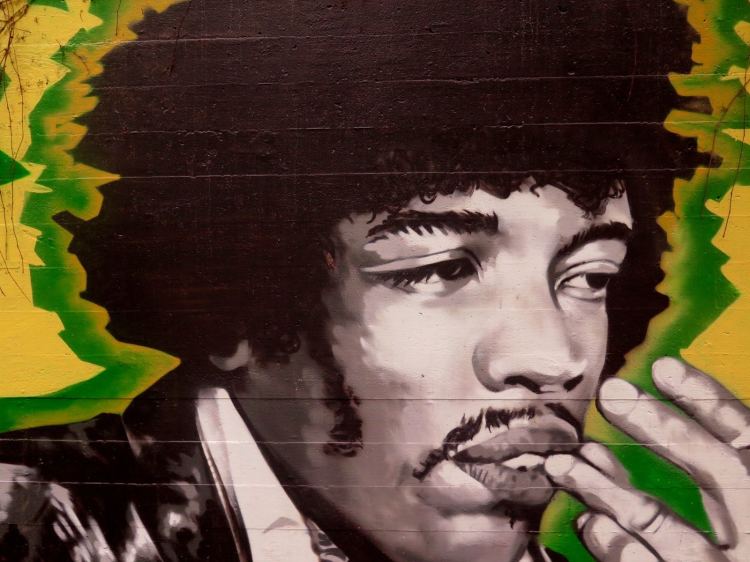 It has been a controversial site. The original block-long mural, in the Queen Elizabeth Theatre area, was painted over blue, prior to the 2010 Olympics. Many, including Vancouver artist Vincent Dumoulin, were less than pleased with the erasure.

The public reacted and a new team of artists – headed by Dumoulin, along with Milan Basic and Manuel “Peeta” Di Ritawas – were brought on to create a new mural. The current blue to green Beatty Street Mural features local landmarks and people who have had an impact on our city. You’ll see Captain Vancouver, Chief Joe Capilano, Chuck Davis, Rosemary Brown, David Suzuki, Joe Fortes…

And why is Jimi Hendrix included? His grandmother, Nora, lived in Vancouver’s Hogan Alley Neighbourhood and worked as a cook at Vie’s Chicken and Steal House. His parents often left Jimi with Grandma; he even went to school here for a while. When Hendrix lived here as an adult – from 1962 to 63, after his army discharge – he used to practice his guitar so much that current residents believe that they can still hear his ghost at the strings, late at night.

Streetbox Labs captured the mural creation in a series of videos: