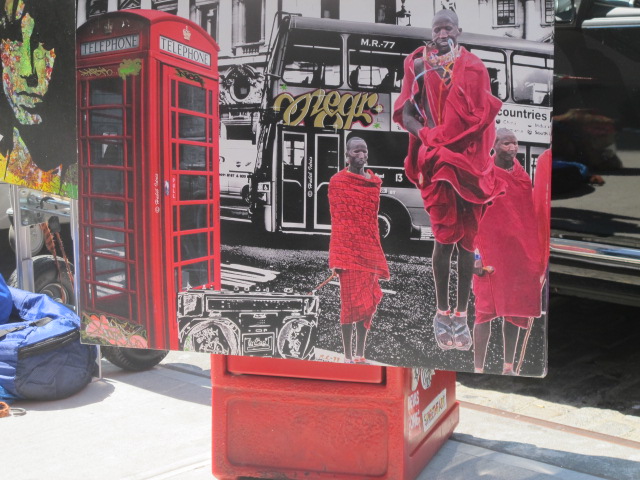 I think I glimpsed him in New York. A few years ago, way off in the distance, an older man in blue, beetling down the street on his bike. Well, the evidence couldn’t be flimsier, but I like to think it was Bill Cunningham. Like so many others, I admired his street fashion photography, purity of focus and singular personality. How nice to imagine that we saw him in his element.

Cunningham died on June 25th. This one-time hat designer and draftee was, at 87, still the On The Street and Evening Hours columnist for the New York Times. His NYT videos would start with the signature theme music – Swingin’ Out from Paul Reeves’ Quirky Vintage album – then Bill would show up to greet us. “Hello, this is Bill Cunningham.”

These On the Street videos showcased Cunningham’s remarkable eye, his generosity of spirit, his curiosity about ordinary people and his perfectionism.

Like so many deeply creative people, Bill Cunningham fascinated the world with his contradictions.

Here was this enormously influential fashion leader – “We all dress for Bill,” said Anna Wintour – who spent every working hour in simple khaki trousers, black runners and a Parisian street sweeper’s coat. “I mean I just like fashion as an art form of dressing the body. If we all went looking like a slob like me, it would be a pretty dreary world.”

Bill had an encyclopedic knowledge of haute couture, yet held the highest respect for wild, self-styled street ensembles. His fashion heroes were not run of the mill celebrities. They were the fashion outliers – Patrick McDonald, Iris Apfel, long before the rest of us discovered her.

As Cunningham said of fashion writer, Anna Piaggi: “This is the greatest subject in all of Europe, Madame Piaggi. I photographed her outside St Laurent’s Couture show, mixed in with all the other women that were trying to be so chic with their pantsuits. It was a revelation. I never saw anyone like her. I think she’s a poet with clothes, but a very fine poet.” 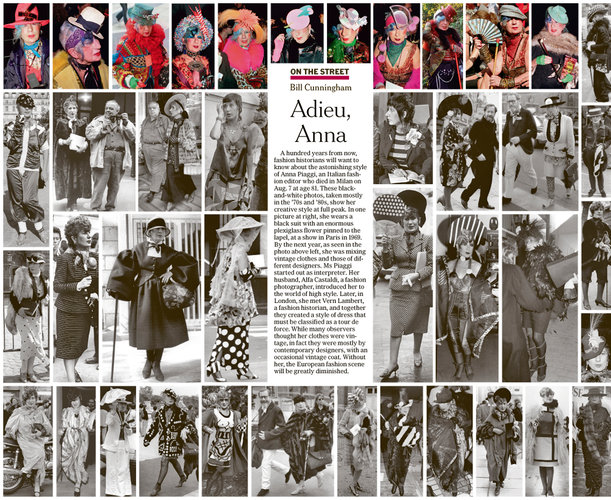 Cunningham was willfully determined to get his work done just right, yet he was genuinely humble. He was embarrassed by kudos, yet appreciative of the acknowledgment. He had patrician manners and exquisite taste, yet lived happily for decades in a tiny Carnegie Hall studio space, his prison-sized bed shunted between two long rows of filing cabinets.

Bill would be enthusiastically chatting – it might be about the influence of technology on young fashion, the search for beauty, his upbringing, Steven Burrow’s powerful, all black-model fashion show in 1973 Versailles – when, abruptly, he would avert his eyes to fight back tears.

Given his own rich complexity, how fitting that Cunningham’s last posted video was entitled Duality.

On Work
• “A young fella came here from Women’s Wear, and he said: what would your legacy be? A legacy?! Is he crazy? Who thinks about a legacy? I’m a worker in the factory. All we’re concerned about is what we’re doing today, never mind a legacy. That’s baloney.”

• “Money is the cheapest thing, Liberty, freedom is the most expensive.”

• “It’s why we do all this documenting, Josef. Very often it’s only the photographs that remain”

• “I’m going on 86. That’s not important! The important thing is I’m still enjoying what I do.”

On Photographing Fashion
• “I write with pictures. Do you think I know what I’m photographing when I’m out there? No. The street speaks to you. It tells you what’s happening. If you’re not on the street, you don’t know anything.”

• “You have to do three things. You don’t get the most information from any one:

• “I think it has to be done just discreetly and quietly. Invisible.”

• “I’m not interested in the celebrities with their free dresses, that’s not important. Look at the clothes: the cut, the new cut, the lines, the colours, that’s everything. It’s the clothes, not the celebrity and not the spectacle.”

Fashion Forward
• “If you ever were despondent about the big business and branding of art and fashion, forget it! A new generation just opened the door to fresh air… It’s all in America. You just have to get out from under all the pre-packaged, branded nonsense.”

• “When people say there’s nothing happening in fashion, oh, they missed the boat. They better get away from the Geritol set and get with the kids, because with the kids, it’s happening.”

• “A lot of people have taste, but they don’t have the daring to be creative. Here we are in an age of cookie-cutter sameness. There are few that are rarities. Someone that doesn’t look like they were stamped out of ten million other people looking all the same.”

To use one of his favourite words: you are marvelous, Bill. Thank you for so many years of inspiration and beauty. We’ll leave the last word to you:

“So enjoy and have hope that there are people thinking well outside the block in both the art world and the fashion world.”

Art For The Dead