Bob Mankoff was telling us about his visit to the cardiologist. He was “strapped to the machines” – lines in, lights flashing.

“What do you do?” asked the fancy doctor.

“I’m the Cartoon Editor for The New Yorker.”

Off went the lights, out came the lines.

So goes a day in the life of the 72 year old Mankoff. All sorts of people dream of seeing their cartoons in the pages of The New Yorker and Mankoff is the way in. Today, he is chatting to a small group of 99u conference attendees in New York.

Every Wednesday, Mankoff tells us, anxious cartoonists come to present him new work, fingers crossed that this will be the week he buys. As he speed-flips through their preliminary drawings, Mankoff is amiable, but blunt. After all these years, it takes him little time to decide whether a cartoon will work in the magazine.

The New Yorker also offers readers a chance at cartoon glory, with a weekly caption contest. Mankoff reveals that the New Yorker has received:

Film critic Roger Ebert eventually won a caption contest after 107 tries. ‘It’s not that I think my cartoon captions are better than anyone else’s,’ Ebert wrote on his Chicago Sun Times blog, ‘although some weeks, understandably, I do. It’s that just once I want to see one of my damn captions in the magazine that publishes the best cartoons in the world. Is that too much to ask?’

These days, Mankoff crowdsources the first stage of the caption judging. Readers can go onto the New Yorker site and rate captions: unfunny, somewhat funny or funny. Mankoff and his staff will choose the winner from the highest rated captions.

“And who judges your cartoons?” one of our group asks Mankoff. 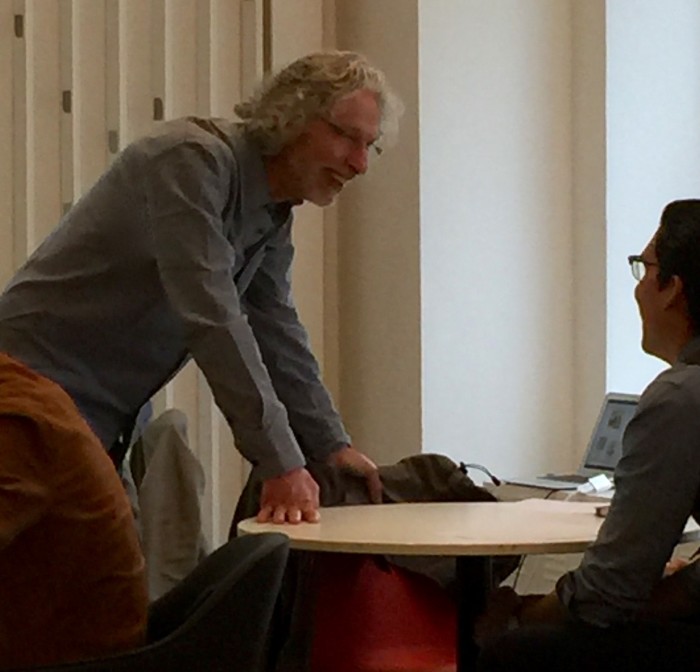 Mankoff became Cartoon Editor of The New Yorker in 1997. He grew up in Queens, inspired by comedians like Jerry Lewis and Woody Allen. Mankoff started graduate work in experimental psychology, but left to become a cartoonist. He might have become a stand-up comedian, if there were more clubs at the time.

After hundreds of failed submissions, Mankoff finally had one of his cartoons accepted by the New Yorker. These days, he is more likely to be mentoring young cartoonists than submitting his own cartoons. “Eventually, you start to repeat yourself.”

From his years of generating and judging cartoons, Mankoff has learned a great deal about creativity and humour.

1. Some of the best cartoons bring two unexpected elements together. This is Bisociation, defined by Merriam Webster as ‘the simultaneous mental association of an idea or object with two fields ordinarily not regarded as related.’ Humour arises from incongruity, be it mild or extreme.

Recently, Mankoff has been seeing more self-enhancing and affiliative submissions.

4. It is important to let your personality as a cartoonist come through. Mankoff offers Roz Chast as an example.

5. Jokes, like most creative ideas, come in clusters. People from different parts of the world will come up with similar cartoons at similar times.

6. The policeman of embarrassment is laughter.

7. Finally, Mankoff warns us, perfection is the last thing you should seek in your cartoon. “Wrong is the start to being funny.”

For more Mankoff, you can check out his latest book: How About Never – Is Never Good for you? My Life in Cartoons.