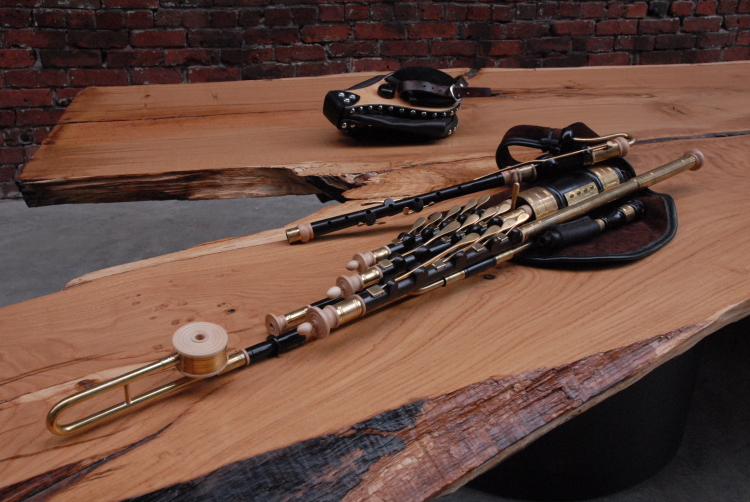 How is it that a Canadian born in France becomes an acclaimed builder of Swedish bagpipes?

It’s a story that starts with an adventurous childhood fit for a storybook. Little Boris Favre was born in Lyon. His parents split early on, so Boris moved to Montreal then Vancouver with his Mum, a flight attendant. “Mum spoke French, German and English, so she kept getting the overseas flights. I spent a lot of time with babysitters.”

Some of the flight calls came last minute. “She’d get a call at 4 a.m. If she couldn’t find a babysitter, she would pull me out of school and take me with her. She would stick me in a chair in First Class with Lego and a pencil and paper for drawing.” At night, they would explore their landing city, before heading back home again.

Every February, Boris’ Mum would take him on an educational trip, courtesy of her flight privileges as an attendant. “India to see traditional temples, Mexico, the Gauguin Museum in French Polynesia, the Berlin Wall, Barbados, Trinidad and Tobago. Then I’d have to come back and do a presentation for my class.”

Wherever they went, Boris’ Mum would introduce him to the local music, food and art. “I got to see Kabuki theatre in Tokyo, Mariachi in Mexico, Polynesian dancing in Tahiti.” Then, four times a year, Boris would fly to France to spend time with his father, Favrene, an oil painter.

Through this culture-rich childhood, Boris was also studying music seriously. He worked up through his ARCT in piano. He also took on the electric bass. “I had a pact with my Mum that I’d stick with Royal Conservatory piano, if I could get a bass.” Soon enough, his musical interests reflected his constant journeys between Europe and Canada. “My interests musically are rooted in those two places.”

After completing a Bachelor’s of Music at UBC and a three year Jazz Diploma from VCC, Favre started into a ten year life of touring with Mad Pudding, a Celtic funk band. Once again, he was traversing Canada, Europe – particularly the UK– and, for a new twist, the northeastern United States. 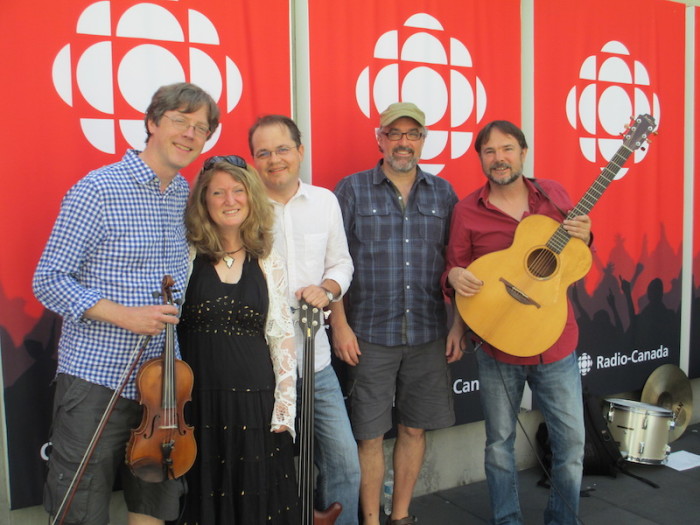 Boris, in the white shirt, with Mad Pudding.

For many, the touring life is a hardship; for Boris, it was life as usual. “I’m a single child. My Dad’s a bohemian artist and my Mum is a rogue flight attendant. I have never been tied down to material things at home. I’ve never really had stuff around.”

It was in his touring that Favre became entranced with bagpipes, initially the Irish uilleann pipes. “Everyone knows the Scottish bagpipes, which can be very loud, screechy and obnoxious. The belief is that they were used by the Scots to hide the sound of the screaming, dying people on the front lines, so that the second row would not be afraid to move forward.”

The Irish pipes, Boris explains, were created for the purpose of making folk music. “They have a gentler tone. The Scottish pipes are diatonic, up to one octave. The Irish pipes go up two octaves, are fully chromatic and are softer so they can be played indoors. They are meant to play reels and jigs with other musicians, more what you would hear in pub culture.”

Favre was also fascinated with the inner-workings of these dry Irish pipes that rely on bellows rather than the wet Scottish pipes, which are blown. He decided that he would get himself a set of uilleann pipes and learn how to play. But, when he started to look for sources, he was disappointed to learn that you can’t just march out and buy yourself Irish pipes. The few artisans who made them had waiting lists of years. Some had closed their books when their waiting lists had reached the twenty year mark. They figured they would be retired or dead by then.

Boris still wanted the pipes, though, and he had been looking for an additional creative pursuit that wasn’t as ephemeral as musical performance.  Why not make some?

Through the BC Uilleann Pipe Society, he found a man in Duncan who makes starter sets. “I spent a few days there. He showed me how to use the big machines, how to drill tone holes, how to make reeds. I also learned a lot online, visited different suppliers. When you saddle stitch the bags, for instance, they have to be airtight. You need a certain type of hide that’s not porous, so I talked to leather suppliers.” 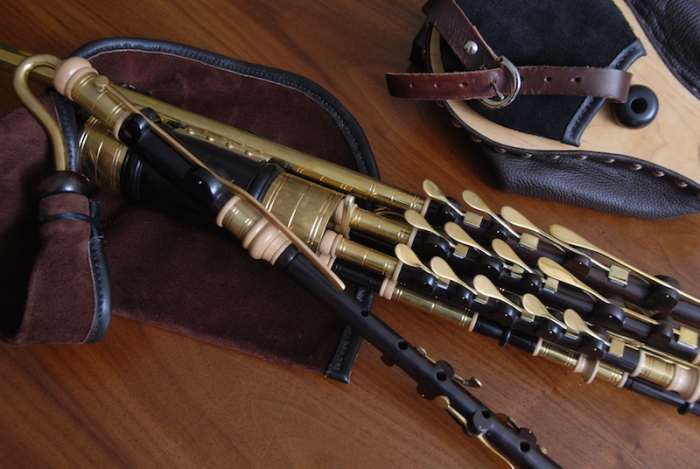 Favre also went back to Ireland to take a two-week pipe-making course from some of the top uilleann pipe-makers in the world. “It took three years before I made anything functional.” Finally, though, he created the set for himself pictured above and in our feature image.

As Favre started experimenting with different types of pipes, a Texan pipe-maker posted one of Favre’s sets on a Swedish website. Suddenly, he started getting orders for Swedish pipes, or sackpipa, from all over the world – Quebec, Japan, the U.S., Australia. “I started becoming known as a Swedish pipe maker and Swedish pipes are the easiest to make. I can make a set in around twenty-five hours. Irish uilleann pipes take at least one hundred and fifty hours.” 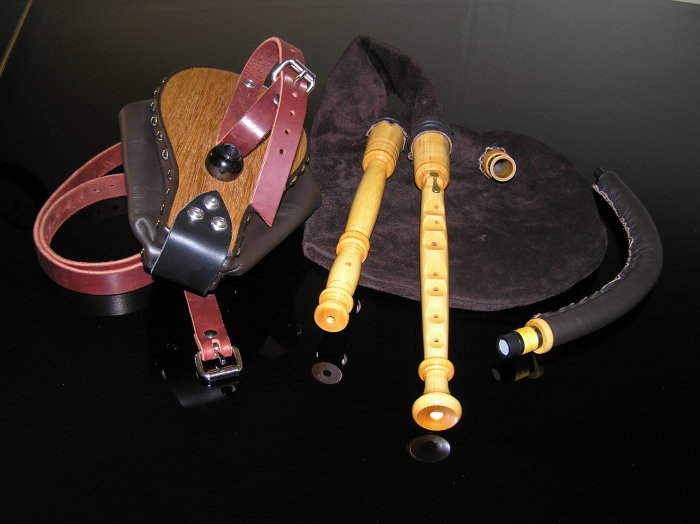 Swedish pipes are still Favre’s top-seller, but he has also been commissioned to make pipes from other parts of Europe. “I met and visited with a pipe maker in the Beaujolais region and now I make French pipes too.”

To round out the map, Boris has invented his own Canadian bagpipes, suitable for even quiet practice in a small room. “The Favre pipes is a prototype that I designed with ease of use in mind combined with the flexibility of a fully chromatic chanter. The single-reed is also easy to make and adjust, sparing the user from having to depend on a professional reed-maker when the reed goes.”

Meanwhile, Favre continues performing with Mad Pudding and several other groups. “Between them, there are enough gigs peppered around the year.” He is just back from a Prince Rupert concert with Pastiche, a Folk Nouveau band that performs original material and traditional folk tunes from Quebec and France. “I’m the only Francophone, so I sing lead.”

Boris also does vocals and keyboards with kid’s band Music with Marnie and the Deborah Ledon Cuban Jazz band. He adds bass and foot percussion in his work with The Shona LeMottée Celtic-Funk Band.

All of this musical experience comes together in a job that Favre particularly treasures: teaching piano, theory and ensemble at the Sarah McLachlan School of Music, which provides music education to underserved and at-risk youth at no cost. Boris enjoys working with a diverse range of motivated kids in a top-notch facility.

“With a lot of teaching positions, you are put in a very small room with your instrument, your desk and your students. At Sarah’s school, it’s a classroom. There is a whiteboard, baby grand piano, bass, vibraphone, hand percussion… It allows us to make more interesting musical projects. We can combine lessons; students can form little trios. It’s an interesting way to introduce pop music, world music.”

Through SoM, Favre notes, the students also get to be involved in some incredible, life-changing performance opportunities. Sarah herself is a regular presence. Each year,  she and the kids record a holiday song, most recently Prayer of St. Francis.

“One time, we took at dozen kids over to Edmonton for a fund-raiser for the school. They got to do an evening show and KD Lang was there, The Barenaked Ladies, Chris Hatfield, Colin James. At our last Voices in the Park fundraiser at Stanley Park, there was Bill Clinton, Stevie Nicks, Bryan Adams. Doing those kinds of shows in these big venues is super exciting for the kids. Who gets to do that at that age?”

All in all, Boris is thriving in his colourful world of many countries, many bands, dedicated students and hand-crafted pipes. “Having a mix is the reality of the business and it keeps things fresh. I’m loving the whole ride.”