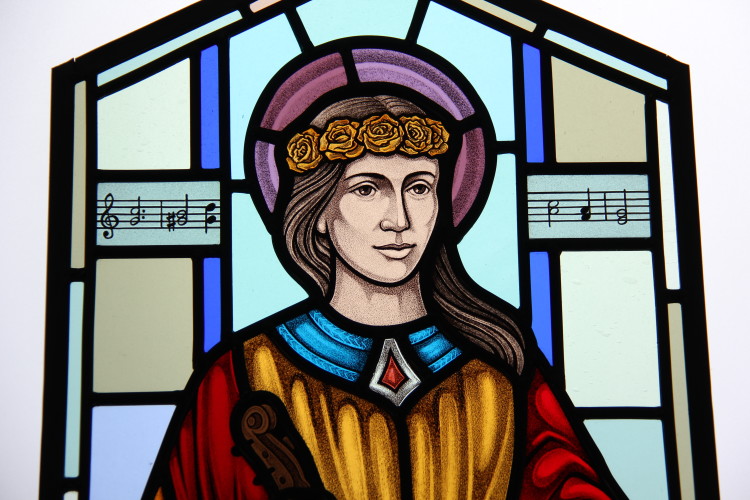 Mum and Dad grew up more than 5,300 kilometres apart. Mum and her six siblings spent their childhoods in the green countryside of  Jamaica. Meanwhile, young Dad and his brother Richard could ride their bikes down to the beach from their home on 3331 Point Grey Road, right here in Vancouver.

The settings may have been different, but if you peeked into their houses, you would have spied similar goings-on: music, laughter, books, adventurousness, ambition and grace.

Dad’s Mum died when he was a toddler, but he treasured her memory – as a mother, as a piano teacher – and greatly respected his British father who worked as a Police and Court Clerk. Mum had a similar respect for her parents who hired many in Clarendon for their sugar cane mill and a large farm with goats, pigs, chickens and food crops.

At age 19, Dad took a job as a mess-boy on a freighter to Ireland, so he could pursue his dreams as a writer. Mum, meanwhile, left Jamaica to study nursing in England then take her first job in Fort Smith. Dad’s radio production work at CBC and another nursing job for Mum led them both to Prince Rupert where they met, fell in love and got married. 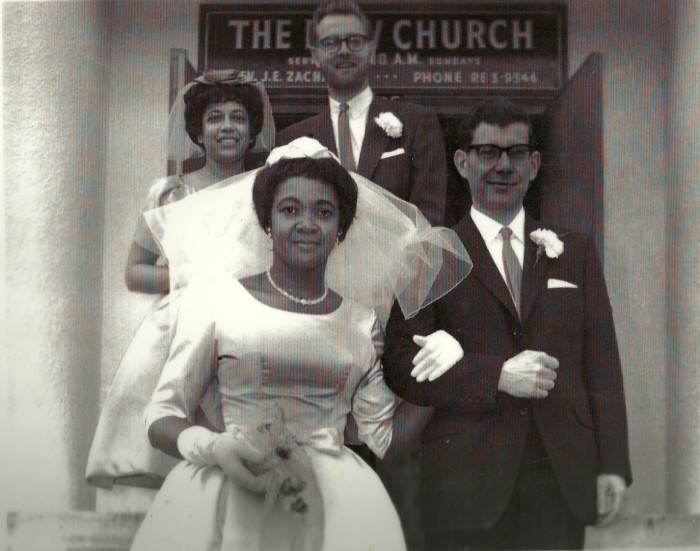 Mum and Dad were building their lives, fulfilling their parents’ dreams for them, yet neither got to see their parents as much as they would have liked. But, the lessons their parents instilled ran deep. If you peeked into the loving home they built for me, you would have seen familiar goings-on: music, laughter, books, adventurousness, ambition and grace.

As Mum and Dad got older, they talked more about their parents: remembering their lessons and wishing they had had more time with them. In 2010, they decided to have a stained glass window created for St. Mary’s Kerrisdale in honour of their parents.

Here in Vancouver we are lucky to have Gilroy Glass – a world-class stained glass art studio. The British-trained Laura and John Gilroy created a beautiful window that meant so much to Mum and Dad. In the middle of a service, I’d catch them looking up to the right at St. Simeon, lost for a moment, perhaps, in memories of childhood. 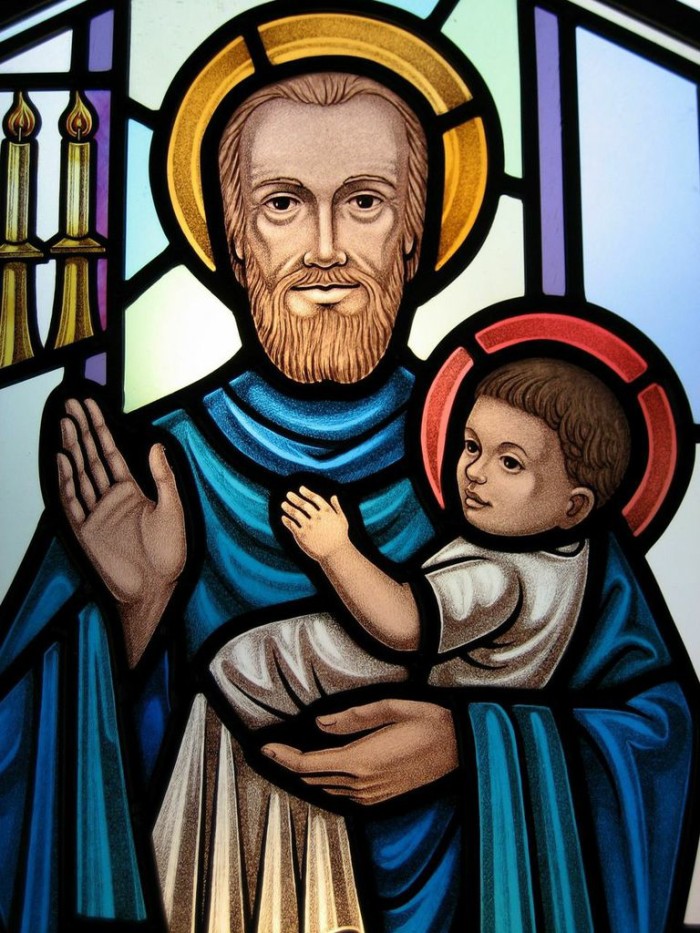 If you are lucky enough to be raised by great parents, you have one unthinkable childhood fear: losing them. On December 27th, 2011, Dad passed away. On March 22nd, 2015, Mum joined him. It is still unthinkable, but thank goodness for family and friends – particularly my husband and daughter – who dragged me through.

Like they had done for their parents, we wanted to find a way to honour Mum and Dad and all they mean to us. We followed their lead and commissioned the Gilroys to create another stained glass window for St. Mary’s. To celebrate the love of music Mum and Dad fostered, as parents and grandparents, we chose Saint Cecilia, patroness of musicians.

Once again, we were in the Gilroy Glass studio. Laura Gilroy was collecting past references to Saint Cecilia and asking us for any special details we would like to work into her initial cartoon. 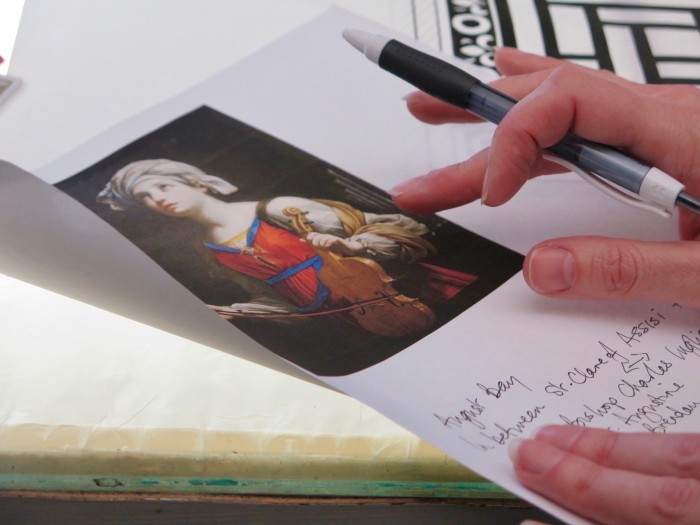 Like Mum and Dad, we did not want to interfere too much in the Gilroy’s artistry. When Laura suggested we incorporate a musical segment for the top of the window, we chose a pivotal measure from Let there be Peace on Earth, a family favourite. 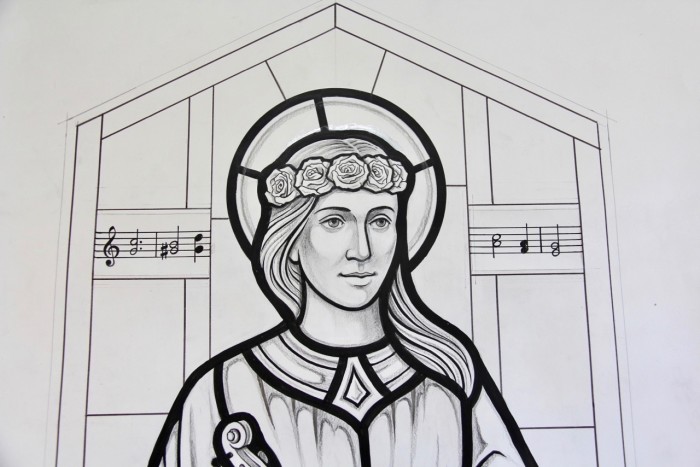 Next, it was time for John and Laura to translate Laura’s lovely cartoon into colour. The face starts to take on features of its own, the Gilroys agree, when paint meets glass. 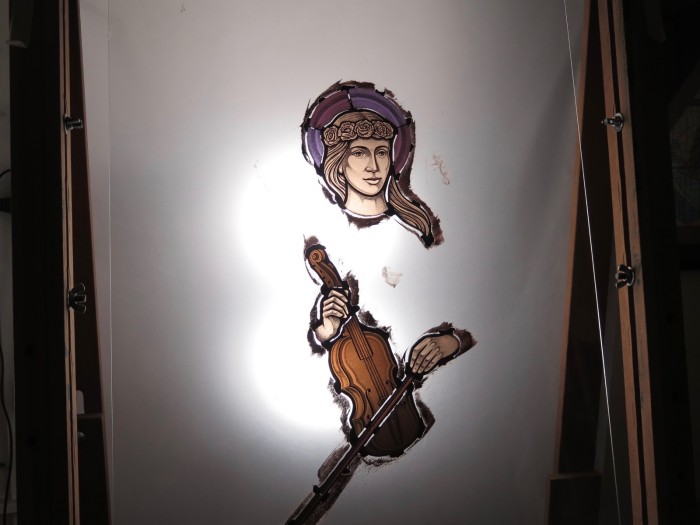 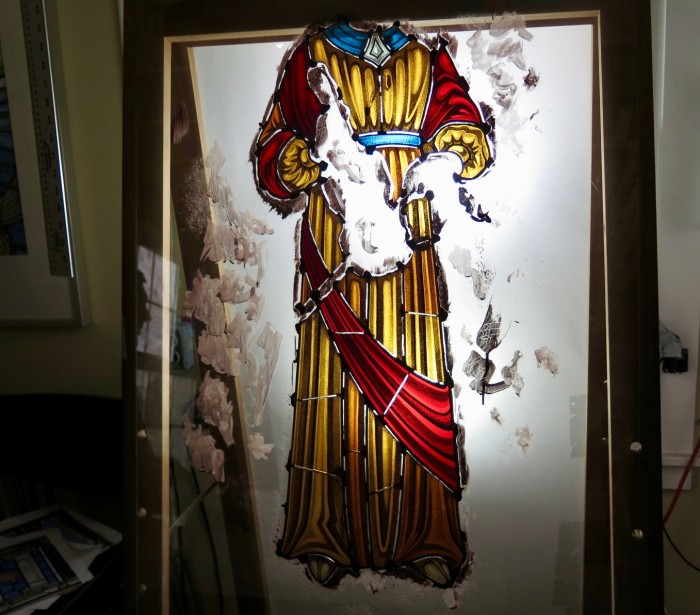 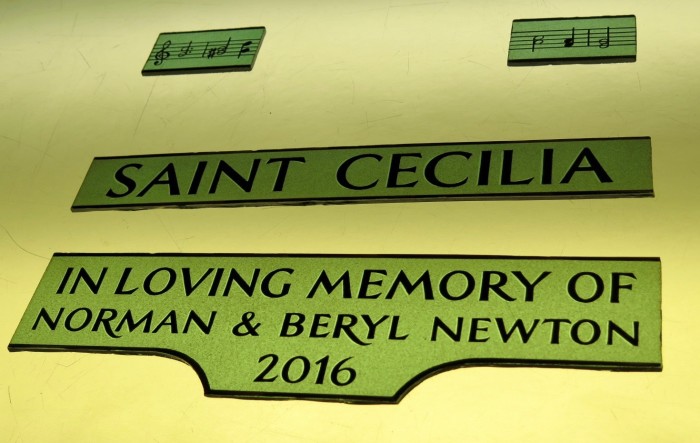 The Gilroys invited us back to the studio to see how the pieces come together so gorgeously before installation. 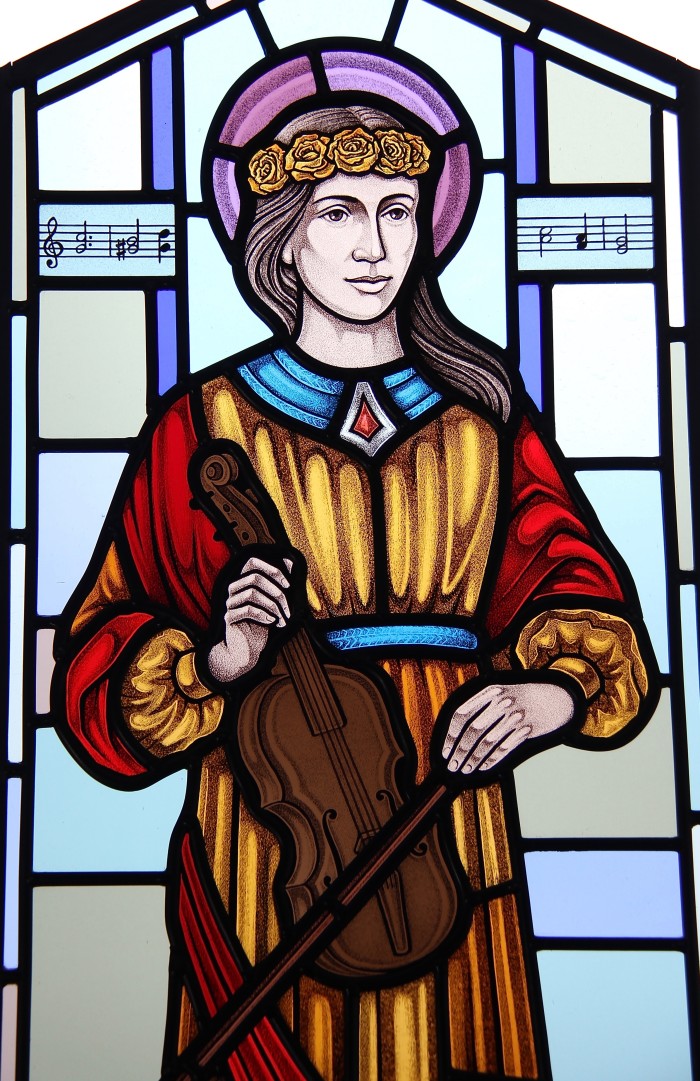 The trick is finding an installation day when the rain is not too ominous and the church roof bare of ice. On November 29th, the weather was as good as it was going to get, so Laura and John headed over to St. Mary’s.

As a first step, John must climb on the roof and remove the unadorned window in the allotted space. This particular glass had been puttied in, so John had to work carefully to remove it without damaging the surrounding wood. 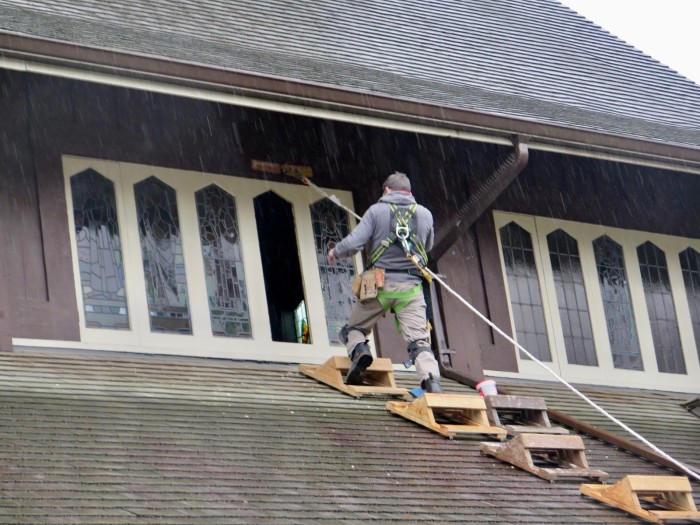 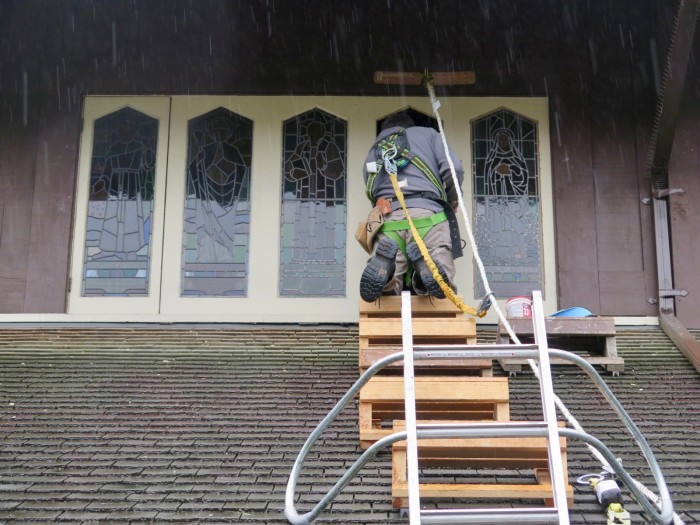 In the past, The Gilroys used to gingerly pass their unprotected stained glass creation up the ladder. Now, they have devised a special carrying crate to ferry the window to its destination. 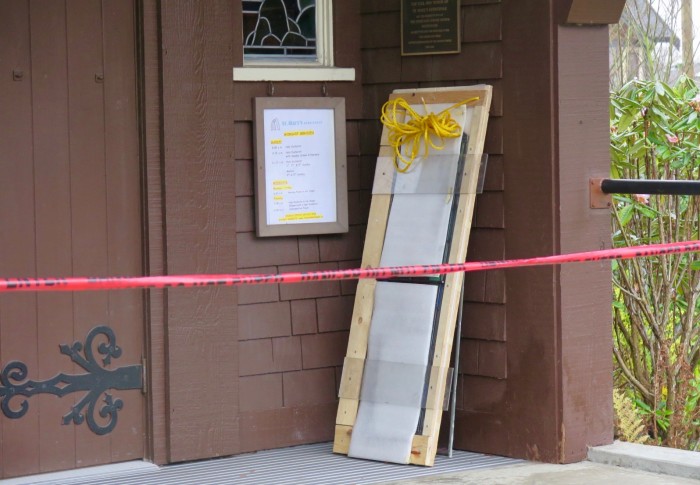 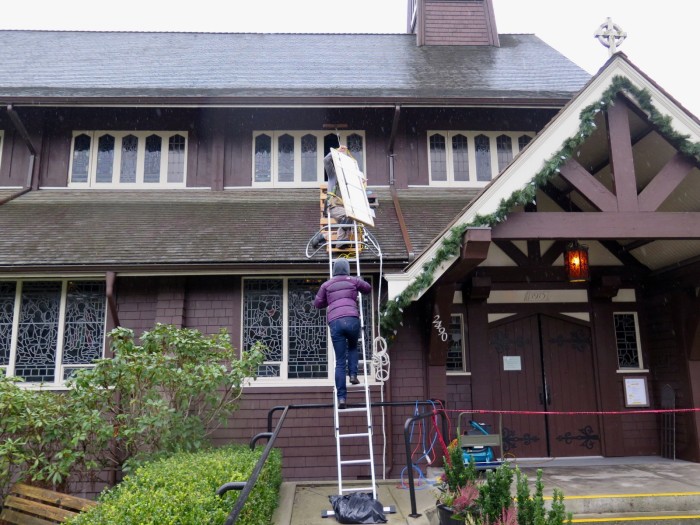 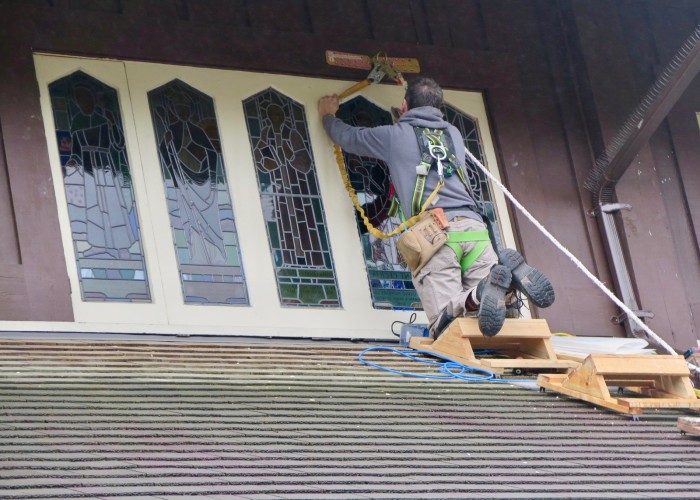 The rain waxed and waned over the afternoon, but the Gilroys successfully installed Saint Cecilia in her new home.

Now, we can sit up in the balcony, look left and, for a moment, get lost in our own thoughts about Mum, Dad and the wonderful life they built.

With love, now and for always,