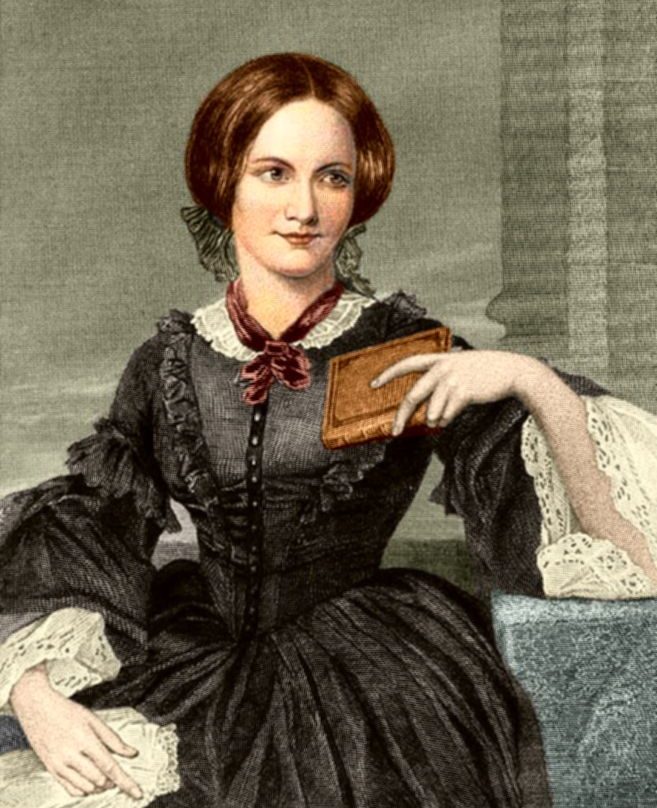 ‘Are there any tea-cakes?’ asked the young mistress.

I was excited to unearth a 115 year-old cookbook, pre-Covid, in a second-hand Vancouver bookstore. Books And My Food was written by Elizabeth Luther Cary and Annie M. Jones. It features both literary quotes – Dickens, Austen, Thackeray, Bronte – and original recipes for every day in the year.

‘Butter ill melted – that commonest of kitchen failures,’ the book quotes English author Charles Lamb, ‘puts me beside my tenor.’

Lamb’s quote is assigned to January 13th and precedes a recipe for melted butter sauce for fish. ‘Season with a saltspoonful of salt, a dash of pepper, a few drops of onion-juice, a pinch of made English mustard, a teaspoonful each of capers and minced cucumber pickle…’

July 2nd brings Robert Browning. ‘That last cherry soothes a roughness of my palate.’ ‘Stone three pounds of cherries,’ Cary and Jones offer in the day’s recipe. ‘Simmer till they begin to shrivel ..’ 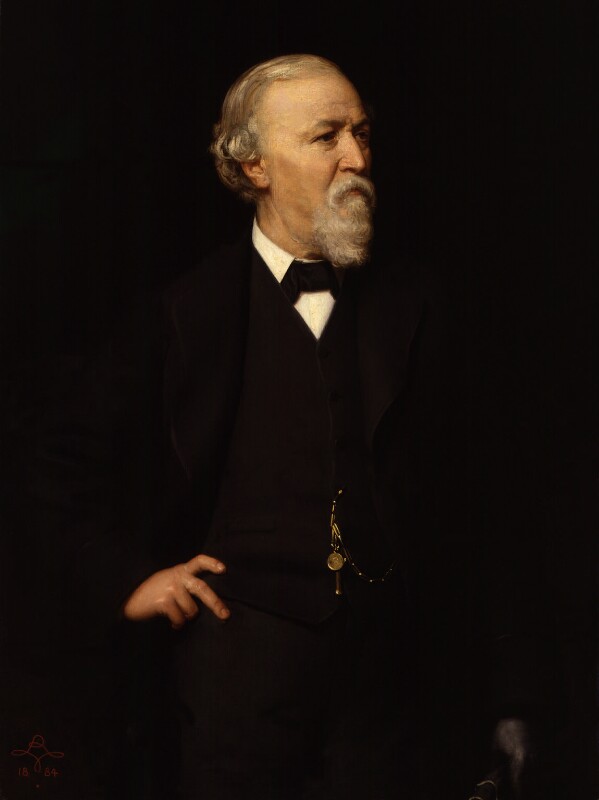 Best dig into the pantry as Charlotte Bronte commands that we make beans tomorrow. 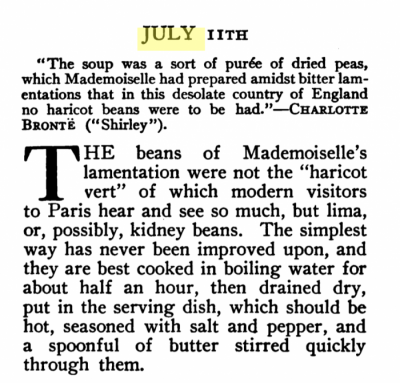 Locked in our 2020 houses, we aren’t the only ones who look to food (and books) for comfort. A number of authors in the Books and Food quotes reference the physical and psychological benefits of certain foods. April 15th instructions for beheading a lettuce follow Francis Bacon’s Sylva Sylvarum. ‘These procure quiet sleep, violets, lettuce, especially boiled; syrup of dried roses; saffron; balm: apples, at our going to bed.’

“I’ll make her a pudding and a pudding she’ll like too,’ says the Mrs. Gaskell quote for December 4th’s bread crumb pudding. ‘Many a one has been comforted in their sorrow by seeing a good dish come upon the table.’

December 4th’s pudding includes ‘half a pound of currants, an ounce of powdered almonds, half an ounce of shredded citron, the same of lemon peel, and a quarter of a teacupful of French brandy.’

December 25th brings a multi-citrus, 8-egged, nut, suet, sherry, nutmeg pudding that must sit for a month and be steamed for two hours before serving. And who better to set off the day than Charles Dickens: ‘In half a minute, Mrs. Cratchit entered – flushed but smiling proudly – with the pudding, like a speckled cannon-ball, so hard and firm, blazing in half of half-a-quartern of ignited brandy, and bedight with Christmas holly stuck into the top.’

Inside Cary and Jones’ Books And My Food, we also find all sorts of clues into eating and living habits from 1904. We see:

Writerly Descriptions
We are not mired in the land of chop, mix and cool. To make puff-paste, the ‘bugbear’ of lesser cooks, you need to ‘dredge’ with flour and ‘dot’ with lard. Apples and peaches are left with their ‘blushing cheeks unadorned’. You might be inspired by Dickens as you set out to make the ‘peculiarly luscious’ dessert known as nesselrode pudding. Later on, you might find yourself getting ready to ‘stone’ three pounds of cherries and simmer them until they begin to ‘shrivel’. 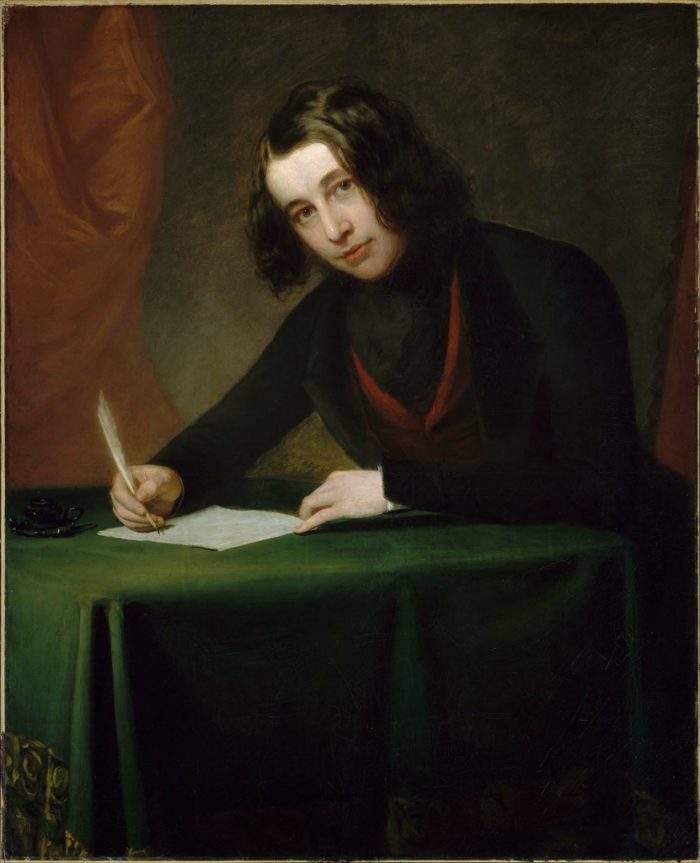 International  Jibes
Great care must be taken in making an oyster bisque that would content ‘even a Parisian’. A Caledonian trifle ‘may sound foolish’, but it tastes good. Americans prefer onions but garlic is ‘slowly’ gaining favuor.

Patience and Toil
Oh, the things we bemoan in our modern kitchens. The carrots aren’t pre-cut. The lettuce is not yet ripped into bite-sized pieces. In 1904, there is all manner of straining through cloths, mushing by hand and dissolving of solids. Cary and Jones marvel at the new, portable churns that allow you to make fresh, sweet butter ‘while you wait.’ Not to worry if you don’t have a churn: big-egg beaters, a kitchen bowl and heavy cream will get you to butter too.

Serious Food, Serious Time
A ‘simple consommé’ is proposed as a stand-by soup for January 7th. After cutting up various meats, spices and herbs, you are to stand by the fire and cook them ‘slowly all day’. Delicate chocolate is ‘perfection’ for breakfast (you had me at chocolate for breakfast), if you dissolve the chocolate in water, boil it for fifteen minutes, leave it on the side of the range overnight then reheat it again in the morning.

The fig pudding involves soaking pulled figs overnight in claret, simmering them in the morning then setting the whole thing away for cooling before the introduction of the sherry whip cream and the candied cherries. Interested in making Ratafia? Well, you’ll need to blanch two ounces of peach and apricot kernels and bruise them before tucking them into a bottle with a pint of brandy. Then you put the whole mixture aside. For a month.

Frugality
The treasuring of ingredients, the pinching of pennies – this is evident throughout. A rich lemon-pie is ‘sadly unfitted for a cottage income’. At the price of one shilling each, the authors suggest that readers use eggs singly, not in ‘battalions’. Best, really, to celebrate the ovoids in eggnog.

Battling Indigestion
There is no mention of the pink goo that makes the people  dance. Hard biscuits, however, are said to be the joy of dyspeptics. Pulled bread is similarly ‘a gastronomic blessing’ to a dyspeptic.

‘And as for the turkey and celery sauce, you should have seen how our host dispensed it.’ December 27th’s quote comes courtesy of author William Makepeace Thackeray’s Memorials of Gormandising. 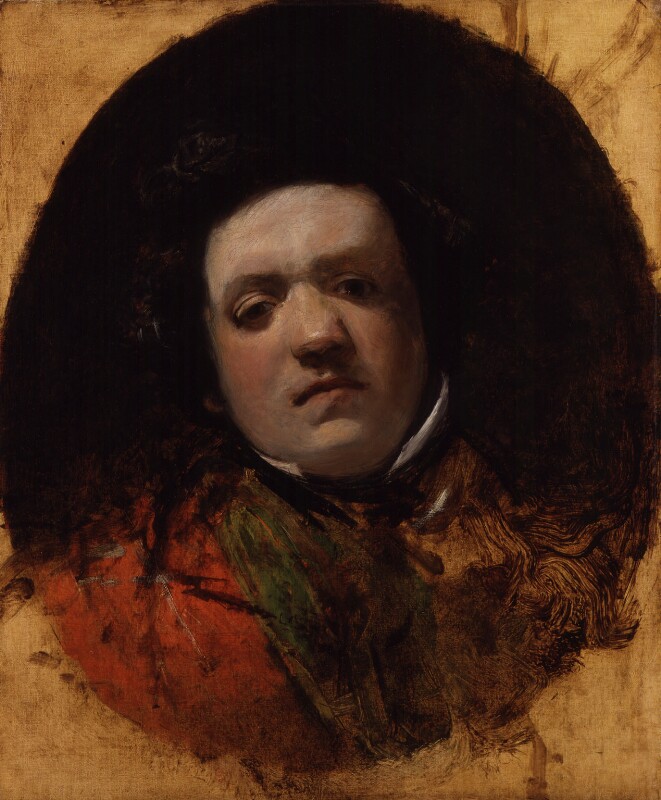 Who knew? In Cary and Jones’ world: ‘Nothing is better’ than a fine white celery salad. In 1904, this revered vegetable – now known best for reputedly taking more calories to eat than digest – is hurled and curled in ice water, mixed with mayonnaise and capers, garnished with stoned olives and pimolas, et voila. Bread and cheese is said to be improved with boiled celery. Hmm. And it’s not just the celery stalk that is exemplary. ‘Few people realize the excellent flavor of celery root’. You are to cut it thinly, boil it for two hours and add cream sauce. Delicious, apparently, and a most excellent ‘calmer of nerves’.

.
Why is The Rum Always Gone?
It’s not all virtuous celery. Butter is everywhere and July 26th  – mark the calendar – brings a Dickensian rum omelette . 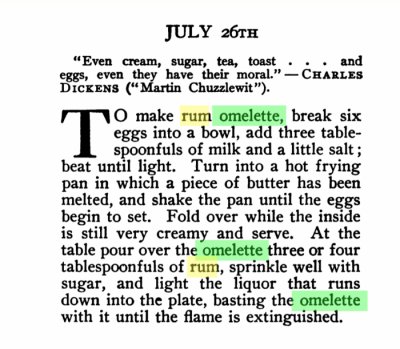 Bring On The Ice
Ice is also key. Young, sweet turnips should be pared, cut in quarters then buried in ice-water for thirty minutes. Puff-paste requires a cup of freezing ice water. Like its sister celery, bacon is also dipped in ice before meeting the shock of the frying pan and the sting of the onions. If you torture the bacon a little more – ice, fire, ice, shake, broil – then it will be palatable for even an ‘invalid’, particularly when it’s served with cresses fresh from the brook.

The More Things Change
With all of these differences in taste, toil and root vegetable adulation, some things do remain blessedly the same. ‘No better way for using strawberries has been invented then serving the perfect fruit with sugar and rich cream, being careful that you have sweet berries.’

Header: Posthumous portrait by Duyckinick based on a drawing by George Richmond. 1873