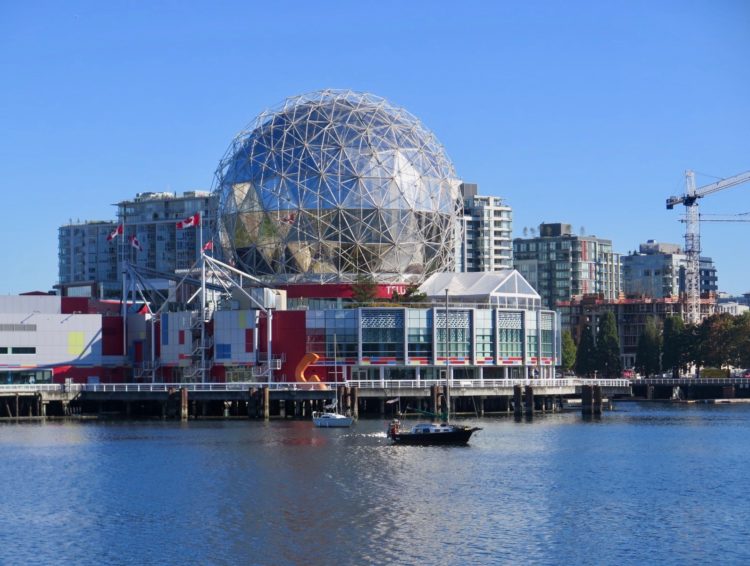 If you’re strolling the seawall on the night of February 8th, take a look over at the Science World dome. You’ll see its 391 lights and 766 triangles rippling with colour – the Fireworks display – in honour of the Science of Cocktails charity event happening inside.

This Sunday, the dome will flash purple and blue for World Cancer Day. On February 11th, it will be purple for the International Day of Women and Girls in Science. Valentine’s Day will be red, of course, and on February 16th, the Science World dome will shine red and yellow for Chinese New Year.

Science World’s geodisic dome is based on the patented design of R. Buckmister Fuller, an American inventor who lived from 1895 to 1983. Architect Bruno Freschi created our dome for Expo 86, while architect Boak Alexander later built it out into Science World.

Last summer, passersby had the opportunity to control the Science World dome lights, thanks to Tangible Interaction’s OH! display. Their mini-controller 1:60 model was covered with 240 LEDs and movement sensors.

Tangible’s Creative Director, Alex Beim, passes the dome everyday on his way to work. He had long thought about how fun it would be to animate the Science World dome and to bring the idea of hands-on science outside the museum.

If the February 18th dome fireworks show has you curious about the  quick-to-sell-out Science of Cocktails event, sign up now for 2019. Amidst pyrotechnics and hands-on displays, top bartenders and chefs from around the city serve up their creations and demonstrate the ‘chemistry and physics behind preparing modern cocktails and cuisine.’ The money raised goes to support Science World class field trips for underserved schools.

For more on Tangible Interaction, here’s a 2015 profile we did on founder, Alex Beim.