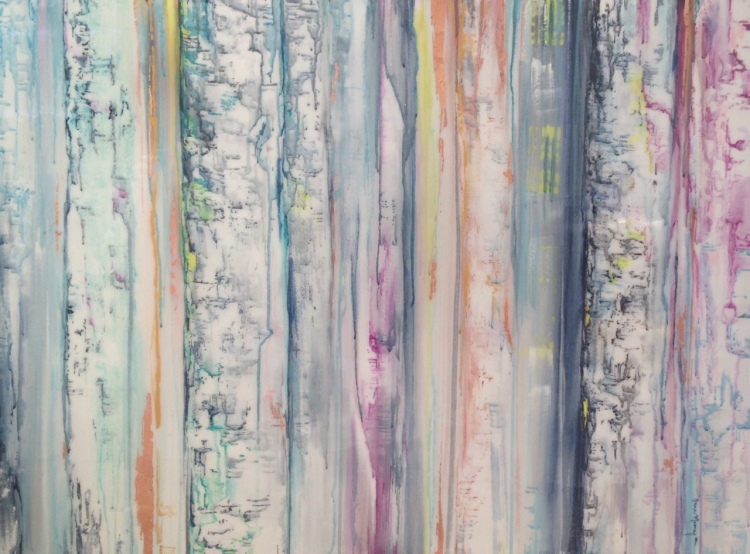 She had been dreaming about it for a while. Finally, one year ago, she did it. One year ago, Dana Mooney left her day job and started working full-time as a painter. “It was the scariest moment of my life. It’s still scary.”

Mooney had been painting since she was a child. “I was the art girl. I wasn’t into sports or anything back then.” Her career path to that point had been creative. She had studied make-up artistry and worked in print and advertising. She had moved onto the Interior Design program at BCIT and worked at Peridot in South Granville. “I was painting and selling art on the side.”

Dana was offered the opportunity to hang some of her artwork at Peridot and was delighted when it sold well. “That’s when I learned that there was a market for my work.”

When she decided to commit to the artist’s life, the single Mooney knew that she had to get selling. “I just started contacting every person I could find online that might be interested in my work. I googled interior designers and thought back to people I had met. It was scary financially. I worked really hard, night and day.”

She was enormously relieved that her efforts paid off quite quickly. “I did every show that I could. IDS West – the Interior Design Show – was a good one. The exposure was amazing. People were seeing my work and remembering my name.”

In Spring 2014, Mooney was thrilled when The Cross Decor and Design approached her. “I had an interview with Stephanie, the owner. She liked my work; it was a good match. That was a really big launching point.” She can easily take herself back to the excitement she felt when she first saw her paintings hanging in the store.

Right now, her latest collection – the Ikat series, inspired by the fabric – is hanging at The Cross. Through her own website, she is also selling throw pillows with her artwork printed on the case.

In all of her work, Mooney is inspired by the West Coast. Living in a fourth floor walk-up in the West End, she enjoys a beautiful gleam through her skylight and the lure of the beach nearby. “It’s such a beautiful city. It’s also not too huge; you can establish yourself.” She is also attracted to San Francisco. “The design scene is so cool there.”

Mooney gets her daily fix of artistry from magazines like Rue and Lonny and Instagram creators like Caroline Prudence, Megan Weston and the walnut-wielding Donald Robertson with his Fashion Is Nuts.

Dana is delighted with what the year in art has brought her and she is looking forward to expanding into the future. She has some design collaborations in the works and would eventually like to get into more textile and wallpaper design. “I’m open to seeing what opportunities come my way. I won’t let myself get lazy or slow.”

A short video on Dana from Greg Bartels of Gab Films