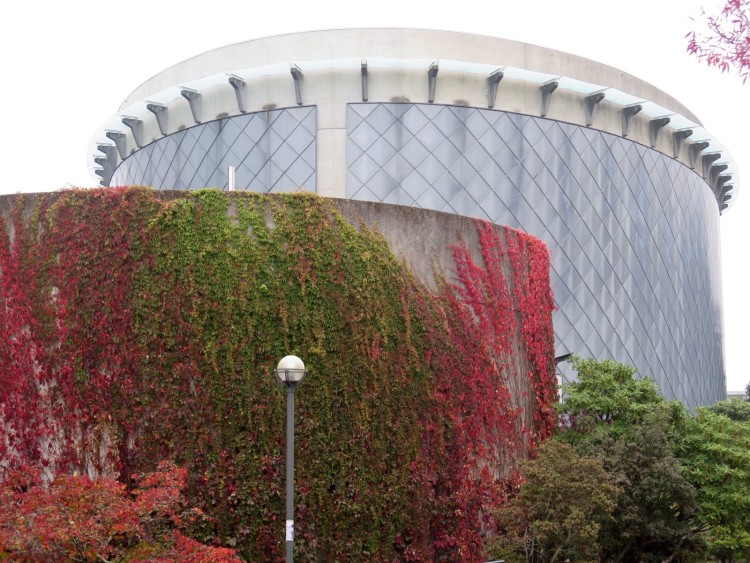 Like a true artist, Jeremy Denk was playing with the repertoire right up to the last minute. Instead of Haydn, Beethoven and Schubert, it would be Haydn and Schumann’s Carnaval. Done.

Well. With the revised program insert in place, the ragtime line-up might just need some shifting of its own. “It’s a giant IPod shuffle,” said Denk. “A play on rhythm.” The Scotts Hayden and Joplin would now come before Stravinsky’s “cubist painting” ragtime and Hindemith’s enormously difficult Ragtime from Suite 1922.

For architect Bing Thom, the building of the acoustically-celebrated Chan Centre would be similarly driven by a strong artistic vision, tweaked on the go. How could this building respect the forest that surrounded it and the music that was soon to come?

Now, Denk and Thom would come together for a beautifully original October concert for the Vancouver Recital Society.

From our above-stage perch, we peered inside the gorgeous piano that was soon to host Denk. The gentle curve of the case was echoed by the gentle curve of the stage floor. In fact, the entire Chan Centre looks like the inside of a piano. Strings and braces on the ceiling. Wooden panels lined up like keys.

“Inside the hall is designed like the inside of a musical instrument,” says Thom. “Concert halls are basically reverberation chambers. What better analogy than to feel like you’re inside a great piano, if you like, with all these stainless steel cables, with all this magical lighting.”

When Denk entered, he commanded the space with his poise. This was, after all, the winner of a 2013 MacArthur Genius Fellowship: for his sensitive, intelligent pianistry and for his eloquent writing in the New Yorker and the New York Times.

From the first bars of Bach’s English Suite in G Minor, Denk and Thom made a pact. Thom’s wood, cork and steel would clear the air for Denk’s light touch runs while gripping tight to Bach’s bass-clef bellows.

‘The microphone and the piano face each other like enemies,’ Denk wrote in The New Yorker. ‘The piano is a very finicky instrument to record, with an existential problem: attack followed by decay, every note a death. You want to capture the ping, the clarity of the beginning of each note, but you also want to get the ephemeral singing tone that remains. It’s a complicated balance: the souls of the piano and the pianist hang in it.’

Denk and the Chan Centre heed each other like friends. And they would end as they began: with Bach. It was a beautifully reflective encore, with the 13th variation from Bach’s Goldberg Variations.

When the ovation was done and Denk well out of sight, the crowd emptied into the lobby. All was pin quiet. It was back to piano inside piano, waiting for the next artist to bring Thom’s space to life.