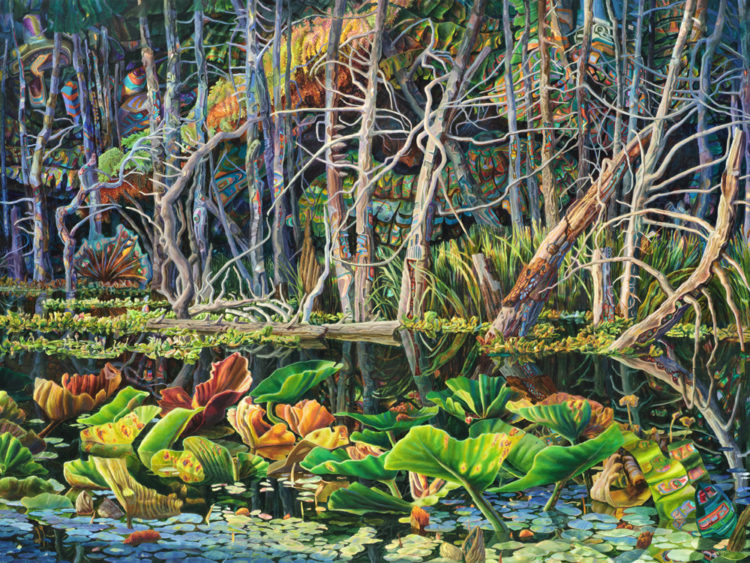 Eight minutes. That’s how long it took for all of Drew Burnham’s paintings to sell at his April 19th show in Toronto. “I’m shocked,” says Burnham. “It’s utterly thrilling.”

When the Bau-Xi Gallery called Burnham’s North Van home with the news, he was genuinely taken aback. “It’s such a big, big deal, not because of the money, but because I get to do it.” Burnham’s shows have been selling out for more than a decade. “My first sold-out show was in ‘04. All but one sold and it sold one month later. I actually feel the same for every show. I do this stuff, but I don’t know what people will think of it.”

This latest show was entitled Nature’s Conduit. It included the painting featured above: Beaver’s Orchard, Thormanby. “That’s an interesting tale behind that one,” says Burnham. A client for whom Burnham had done years of architectural rendering work called him out of the blue. He asked Burnham if he would like to stay in a cabin he owned, just off the Sunshine Coast. “I think you might get something out of it,’ he said. No charge, no nothing. It’s a beautiful island. It’s been very intriguing, source wise.”

“There is a beaver pond on that island, a huge pond.” Burnham explains. “I’d get up early and go down there to see the sun rising. It does that flickering through the trees that can be so interesting. That pond used to be a farm in earlier days. The fellow used to supply the people who had places there with eggs and meats.”

When Burnham finds a location that intrigues him, he will take “a whole lot of photos. I don’t hang from trees, but I’ll squat around, walk through weeds, look through. I’m not a fancy photographer by any means.”

Beach Party, Thormanby is another painting inspired by this same island. “That shot is from the beach, looking up towards the camp site. For whatever reason, someone has stuck these poles in the sand, among all the other logs. I just love how that looks. I don’t know if I changed anything in that painting or added anything – might have added some logs – but the vertical ones are how we found them.” 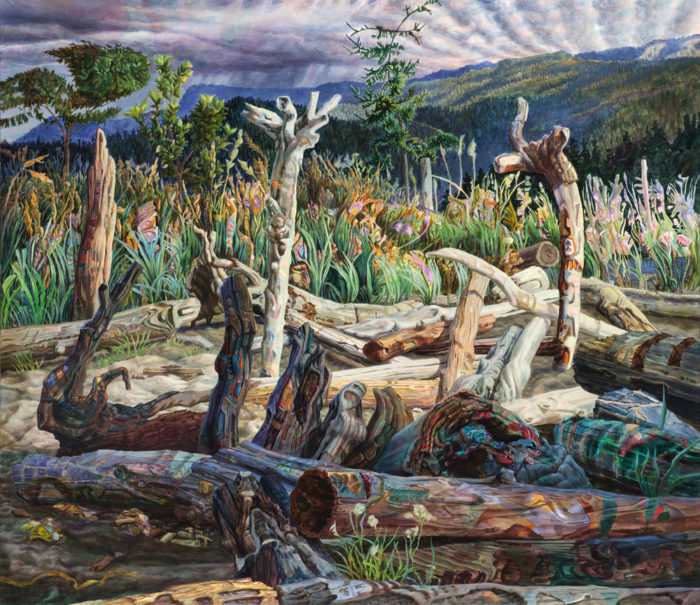 Growing On The Boardwalk, Sullivan Bay grew out of a trip Burnham and his wife, Deb, took on The M.V. Aurora Explorer – a working Campbell River barge with a few staterooms for curious passengers. “They barge huge construction diggers, pickup trucks, gasoline cans, mattresses, anything else that you might need for your property in the islands.” “It’s a nice experience: great food, camaraderie, the people who run it are a really fun bunch.” Burnham spent his time out on the barge deck, shooting pictures.

“This particular place is Sullivan Bay – a little floating village. Our barge tied up to the boardwalk. There are lots of brand new homes, but no one was in them when we were there. It fills up in the summertime.” 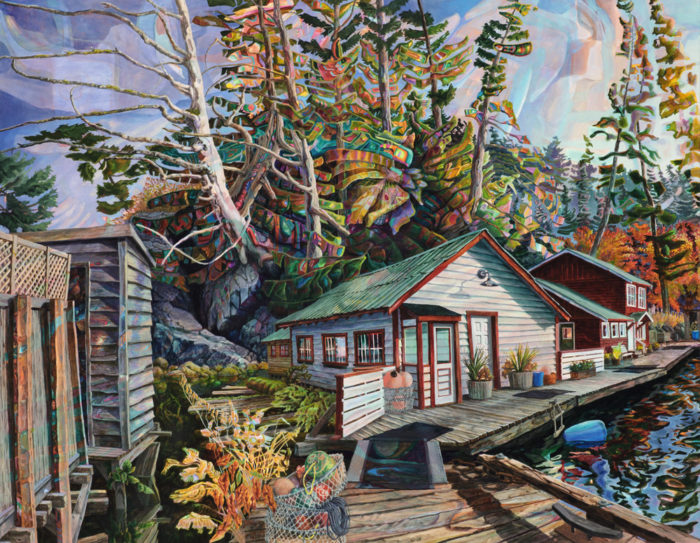 Growing On The Boardwalk, Sullivan Bay
•••

Burnham has been outside painting since he was a child. “When I was in Grade 5 or so, my parents sent me to summer camp. I hated it.” What he did enjoy was painting field trips. “We’d go down to a boathouse along the lake and do images.” As a teen and young adult, Burnham drew horses. “I have a relative who ran race horses. He asked me if I’d be interested in doing a painting of a horse that had done well.”

Through his time at the Vancouver School of Art and at the University of Victoria, Burnham studied with noted Canadian painters Toni Onley and Don Jarvis. “Most of the time in school, I didn’t do anything.” Though he knew he wanted to paint, Burnham had not yet found his artistic calling. “Why do I even feel like I should do this?” he wondered.

One day, a fleeting image – “it was a thing I’d seen days earlier when I was taking a shortcut to a friend’s house. Kids running through the grass” – inspired Burnham to dip into his watercolours. “The tiny point of your brush is what matters, not your head.” Once he had found his focus, Burnham tapped into the lessons on visual basics that he had learned from mentors like Onley. “You should be able to flip a painting over and it looks just as good upside down and sideways as it does right side up.” 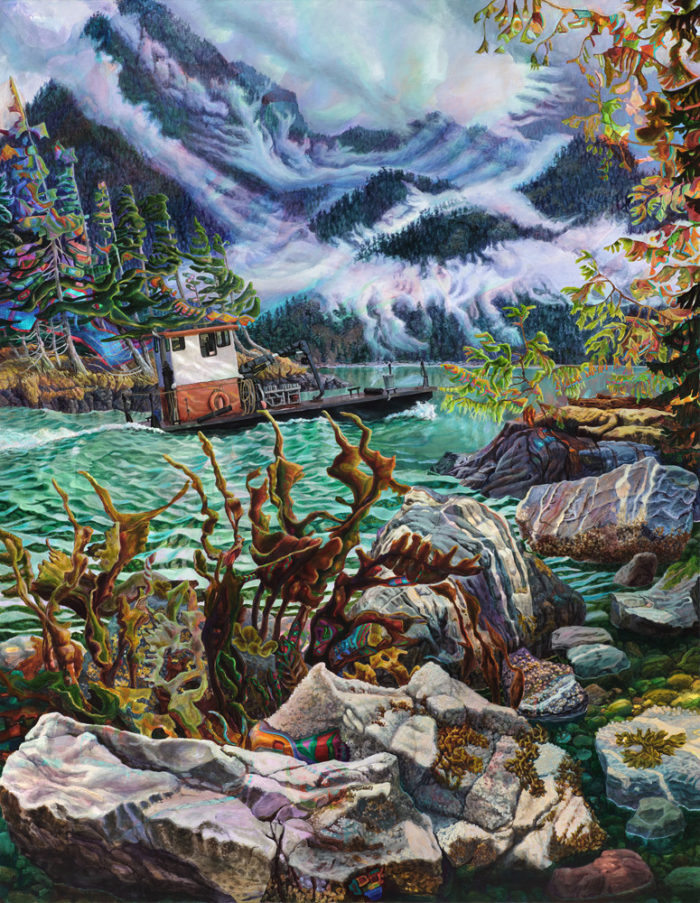 After school, there were bills to be paid and Burnham took on architectural illustration work. “It gave me a funny way of seeing things. It’s like this pile of information will crawl across the canvas. It will stop somewhere and beckon you over. The rendering gave me that discovery.”

By the early 2000s, Burnham’s art sales gained steam and he was able to go into painting full-time. In those early days, he was doing one gallery show a year. Now, his shows happen every 18 months or so. “Each one has been taking a rather long time because of the glazing techniques I use now. And the complexity of the images is outrageous.

“I start out with acrylic. In some cases, it’s a whole abstract painting that goes on in acrylic. And then I do oil– glazes and layers, building and growing the thing. I know what the image will be in reality, but I don’t know how it gets there.

Burnham needs to be able to lose himself in his work. “The world has to go away. Including me. I have to go away too. It’s about not being there, a nothingness. Then the image will show itself in whatever teeny way it’s going to show itself. That’s your door. It takes the brush there and your hand with it and it makes what it’s going to make.”

Burnham credits his wife, Deb, for supporting him so deeply in his work. “Thirty years together. We went out when we were kids, then re-met in the late 80s. She makes it possible for me to do this. She is there for me not just emotionally, but in reality. There is a thing we say among my family and friends, it has to do with lunch. She makes my lunch. She makes me feel complete. So, the world can go away for me. My life is full.” 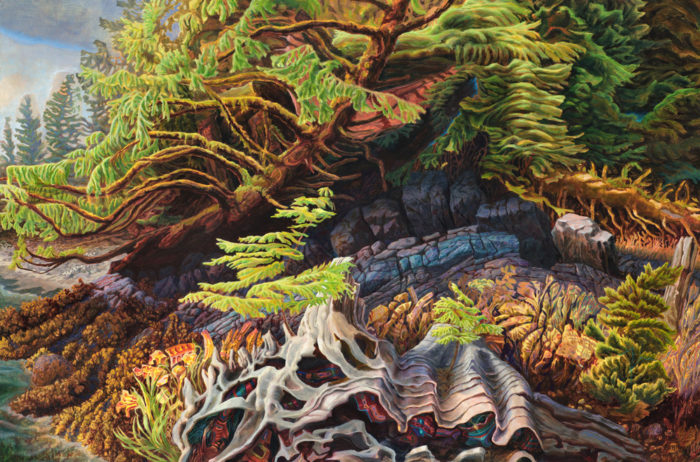 What advice does Burnham offer to people yearning to live as professional artists?

i. Live your life ethically
“To find your calling, it requires that you live an honest, respectful life.

ii. Put in the time
You have to dedicate a certain, huge part of your world to the activity. There are no shortcuts. Keep at it. It’s not a Sunday thing.

iii.Find your focus
The hardest thing is to find out why you? What special thing do you have to offer?

iv. Master the mechanics
If you find yourself doing commercial work, take the opportunity to learn more about technique, how things work.

v. Don’t quit
You don’t let anybody take that away from you. You have a right to it.”

And what does Burnham treasure most about being a professional painter? “In the end of my days, I will know that I did what I had to do.”