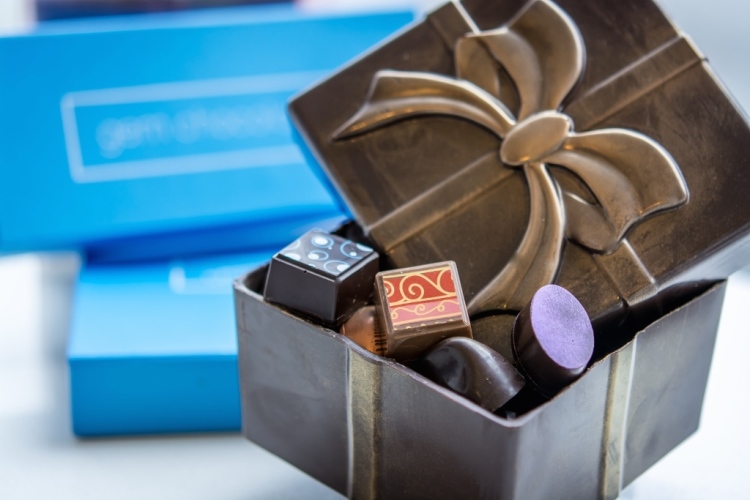 The magic is in the details. Look closely and you’ll find Geoseph Domenichiello shaping owlet eyes, dusting gold dust onto chocolate nuggets and calculating the most delicious balance of raspberry and Grand Marnier.

Chocolatier Geoseph builds his creations in the Gem Chocolates kitchen. He and owner/fellow chocolatier Glenn Knowles have great fun dreaming up new flavours to compliment their intricate chocolate shells. How about Mandula – built around the South African marula fruit, Speculaas – with a creamy spice that invokes German Christmas biscuits or Mintation – coronation grape and mint?

“The reason I did the Mintation is that I like to bring red grapes and mint on hikes. Eating that combination when you’re on a hike, it lifts the mood. The sweetness, the tartness – I thought: why don’t I create this taste in chocolate?”

These aren’t Lucille and Ethel factory chocolates. These are hand-crafted chocolates with painterly lines, curated sea salt and delicate infusions. 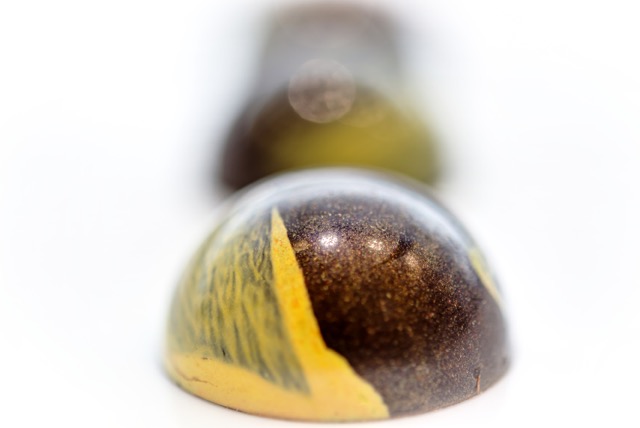 Domenichiello has been piecing together tiny treasures since he was a young child in Toronto. He graduated from Lamb Chop and Mr. Dressup crafts to clay figurines and wax figures. “Eventually it evolved into polymer. I would do miniatures like you see in doll houses. I love anything small and tiny.” His tiny artworks were in demand for friends’ birthdays. Little wee cakes, special hobby-themed requests.

Young Geoseph always had one pet or another – snakes, lizards, fish, field mice. Ever creative, he translated his animal caring into Amigurimi. “It’s a Japanese thing, where you create crochet animals – squirrels, turtles, cats, rabbits…I have another boss who wants me to make a terrier.”

And in his big Italian family, people loved to cook. “I always did a lot of baking. I’d go through phases, like my coconut phase. Until my family said: can you stop with the coconut?”

When it came time to go to university, Domenichiello went for a joint major – zoology and art history. On graduating, he knew that he wanted to veer into the world of food. “So, I went to pastry school at George Brown. I love the excitement that people get from dessert. It’s more like crafting…creating cute cakes.”

At school, he was happily learning about breads, pastries and petit fours. Outside, Geoseph worked as a baker. That is, until he was distracted by a job posting for a chocolate sommelier at A Taste For Chocolate. Though he had never been a chocolate fan – “it was one flavour that never really thrilled me” – he was intrigued. “How could you talk so much about chocolate? I went for it and got the job.”

Domenichiello steeped himself in the history of chocolate, learning 5,000 years of history and going house to house to run tastings. With chocolate now firmly on the brain and in the palate, he took his new diploma and moved to Vancouver. “I was thinking about work as a chocolatier in Toronto, but there are actually more chocolate shops in Vancouver.” 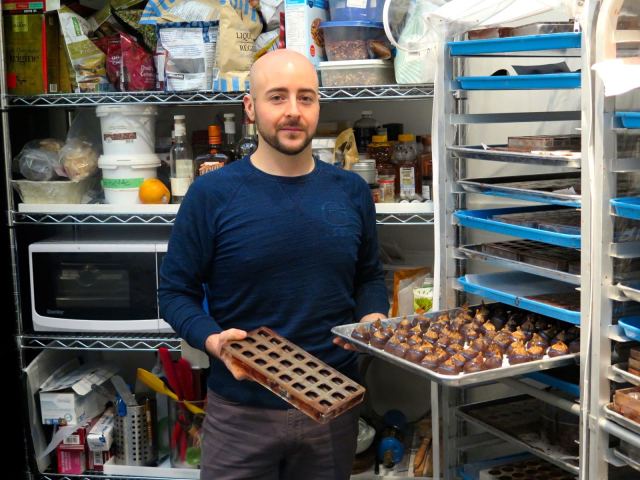 The chocolate scene in Vancouver is one of friendly competition, says Geoseph. He has certainly learned from the city’s best. His first job was at Chocolate Arts, working alongside one of Vancouver’s first gourmet chocolatiers, Greg Hook.

It was at Chocolate Arts that Geoseph learned to cast and make ganache. He also learned enrobing, the process by which pieces of ganache travel through a conveyer belt as a waterfall of chocolate rains down upon them before hardening. “The benefit of doing that is you have a thinner chocolate, so you enjoy the ganache.”

Domenichiello learned a great deal from Hook. “Greg takes his chocolate very seriously. He taught me how to be a perfectionist. He would harvest a lot of his own fruits for the puree.”

As the next step in his Vancouver chocolate education, Domenichiello went to work for another renowned Vancouver chocolatier: Thomas Haas. “There, I focused more on casting. I made all the Christmas, Easter and Valentine show pieces. There was an Easter piece I did – a big hen inside a big egg and all these chicks with Easter bunny ears. All made from chocolate. It really gave me a chance to exercise my creativity.” The pace was fast there, so Geoseph also learned how to be efficient.

As someone who has always enjoyed teaching and helping people, Geoseph volunteers at the Vancouver Crisis Centre and is studying to be an ESL teacher. He can’t stay away from chocolate for long, though, and this September he moved to his current work at Gem Chocolates.

Owner Glenn Knowles offers Domenichiello creative freedom. “He knows I have a lot of experience in chocolate.”  With each new season, comes a new Geoseph chocolate showpiece. 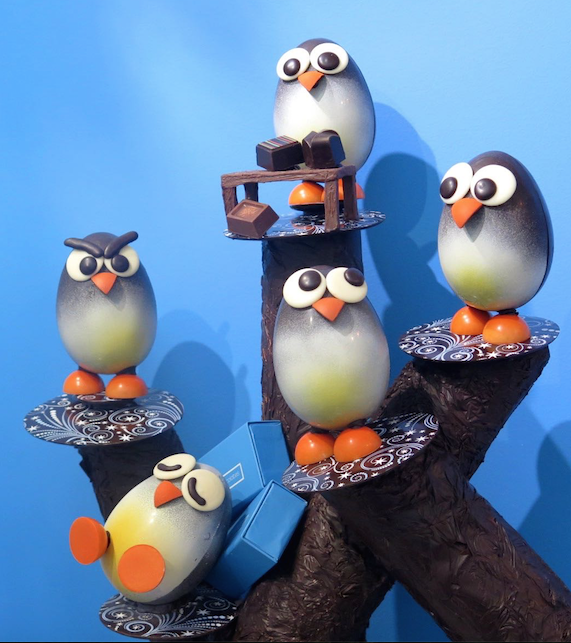 With their dual chocolatier expertise, Knowles and Domenichiello work together in building new flavours. “Glenn really likes the Gold Rush we created, which is lemon infused ginger and dried cherry. My idea was to put the cocoa nibs on the shell before you cast it, so it has a rustic look. It was his idea to luster in gold, so it looks like gold nuggets. It ties in with our gem theme.” 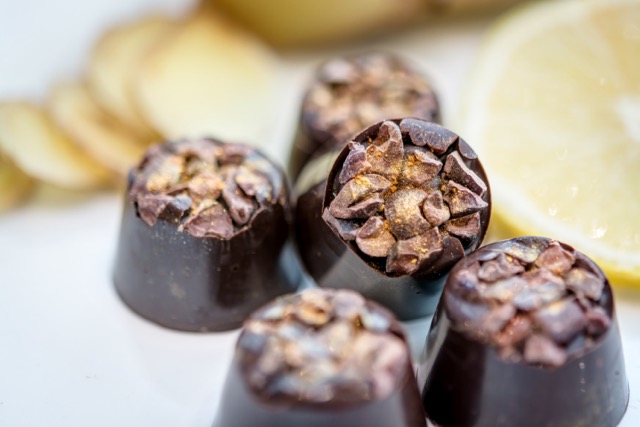 Geoseph is also proud of the froot-bar they created, with its minced fig, candied orange, walnut and cinnamon. “I got the idea from an Italian cookie called a cucidati. It has dried figs, walnuts, orange zest, cinnamon and honey. My Nonna makes them.” 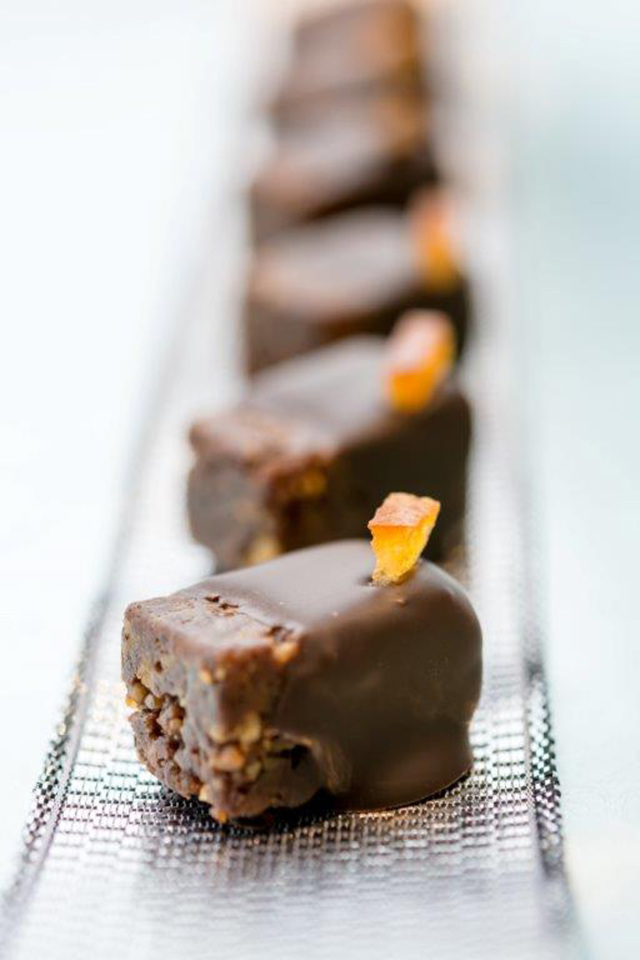 Domenichiello savors his work at Gem Chocolates. He also runs his own Chocolate With Geoseph tastings and could imagine opening a chocolate drinking shop one day. “Chocolate has been around for 5,000 years, and only 150 to 170 years of that has been eating. Before that people drank it. I like to make it without milk.”

No matter what the future brings, says Domenichiello: “I have to keep chocolate in my life.” 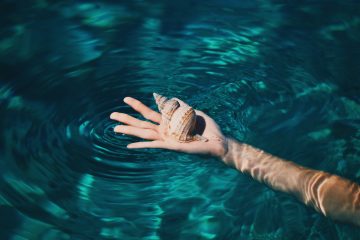