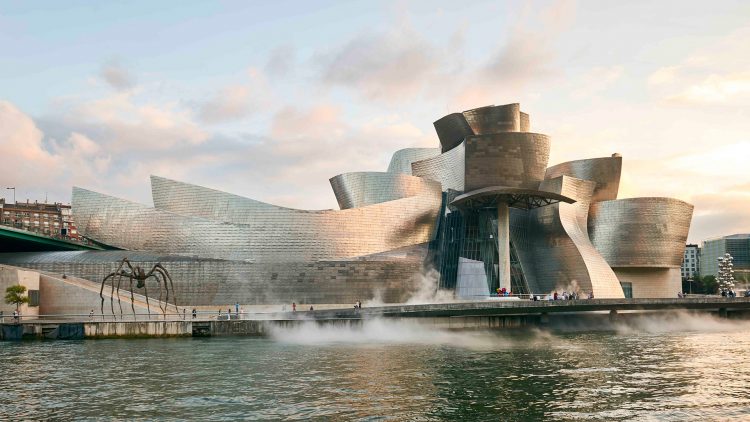 Perhaps you’ve been lucky enough to visit Spain’s Guggenheim Bilbao. Perhaps it’s on your hole in the bucket list for a travel-friendly future. In the meantime, there is much to see of the museum online.

The Bilbao had an instant, enormous impact when it was officially opened by King Juan Carlos I of Spain on October 18, 1997. Now, more than 20 years later, the titanium-clad Guggenheim Bilbao still looks brilliantly innovative. The museum was designed by renowned, you-name-the-award-winning architect, Frank Gehry, who was born 1929 in Toronto and now lives in Los Angeles. Construction took place between October of 1993 to the opening in 1997.

33,000 wafer-thin titanium sheets skin this 24,000 square metre museum which boasts 9,000 square metres of exhibition space. “The impulse,” says Gehry, “was to make a building out of all one material, so it was a three dimensional piece.”

Gehry and his team started with stainless steel museum mock-ups but, no matter how they tried to manipulate it, the steel ‘went dead’, emotionless, on cloudy, rainy days. Gehry just happened to find a piece of titanium in his workshop. “I pinned it on a telephone pole outside of my office. It rained that day and I looked at the titanium and it turned golden, like it does here. I thought: ‘My God. That’s so beautiful.”

El Museo Guggenheim Bilbao – with its undersea curves, distant ceilings, glass curtains, and streaks of sunlight – features a spectacular Atrium that fans out into twenty galleries.

Google Arts + Culture has done an extensive exploration of Guggenheim Bilbao which includes an up-close analysis of some of the works inside. You can also watch ‘Bending Gravity at the Guggenheim Museum’, a short film in which photographer Trashhand follows free-runner Johan Tonnoir through unlikely flips and long-distance leaps in and on the museum.