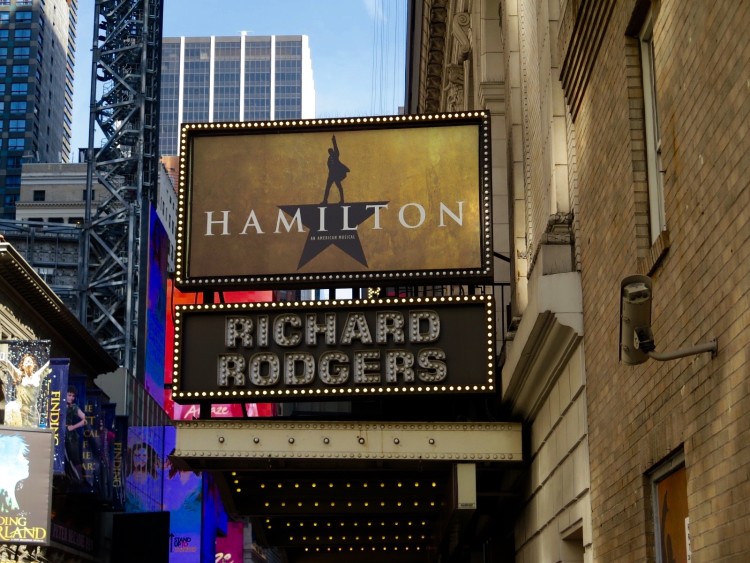 Alas, no ticket genies. A kindly, if misinformed, gentleman suggested we try the Cancellation line. “Go at 5. You’ll be first in line. Any one show might have 1 to 10 cancellations and they’ll sell the tickets by order in the line.”

Well…Here is what we learned, in case you are so tempted.

We arrived at 4:30, prior to an 8 pm show. The Cancellation line was located down the street, in front of the Les Mis theatre. We would be moved closer after the Hamilton matinee mobs had exited. There were 8 people ahead of us, most of whom wanted two tickets, the maximum.

Shoot! Did the people at the front of the cancellation line beat us by half an hour, an hour? Not quite. Their foldout chairs and to-go pizza boxes were the first clues. The first people in line had been waiting for 36 hours. In fact, up the street, people were arriving to wait overnight for the next day’s show.

A friendly guy, dressed in yellow hat/yellow shirt, explained that a few hours ago, someone from the theatre had come out to offer two premium tickets that had become available – $450 each. Two of the long-line waiters had stepped out to grab those. Others were hoping for regular tickets at $170 or so.

I assumed that the man in the yellow hat was an official from Hamilton. He was not. He was a professional line-sitter. He and his co-workers had been hired to wait overnight in the Hamilton Cancellation line – $25 for the first hour, $10 for every half an hour after that. They are hired in other parts of the city to wait for cronuts, rainbow bagels and Black Tap milkshakes.

As if all of this was not lesson enough, a London tourist wandered by and stopped near where we were standing. “Don’t even bother! Yesterday, I was here for 12 hours and didn’t get one ticket.”

Well, good on you Lin-Manuel Miranda and goodbye Hamilton line. 2017 it is. In the meantime…

Update on the Update
The rules have apparently changed again! Hamilton Twitter just announced that the Cancellation Line rules are now as follows.. 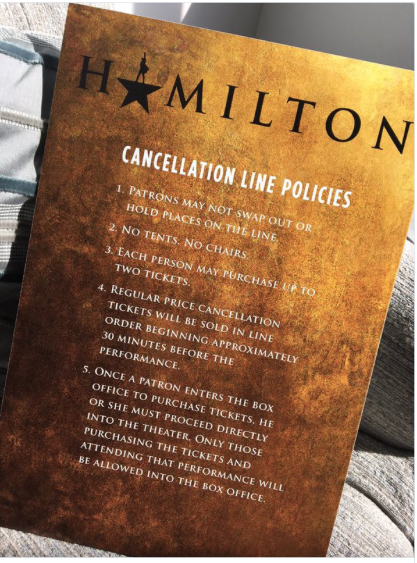