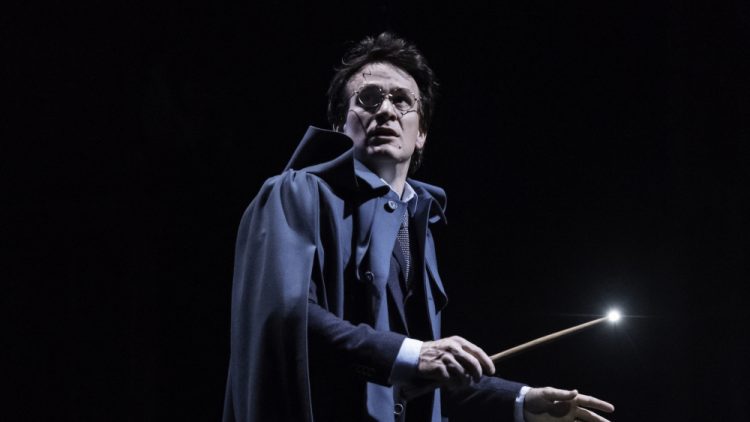 The Magic of JK Rowling
The first spell is cast by the magic of JK Rowling. New York’s Lyric Theatre lobby is abuzz with aspiring wizards: Gryffindor-robed twenty somethings who grew up with Harry, Hermione and Ron, a father and his seven year old in Hufflepuff ties and matching yellow pants, newly married Ravenclaws treating two friends who know nothing of the boy wizard. Most intriguing are the seniors inching through the crowd with their canes and Slytherin scarves.

In this wizarding world, people are eager to share their HP secrets and guess at the show to come. Director John Tiffany, Playwright John Thorne, Composer Imogen Heap and the rest of the talented creative team clearly benefit from Rowling’s rich world. Her remarkable attention to character-fitting detail translates into layers of intrigue onstage: bewitched libraries, almost-wise portraits, fierce displays of mother love. 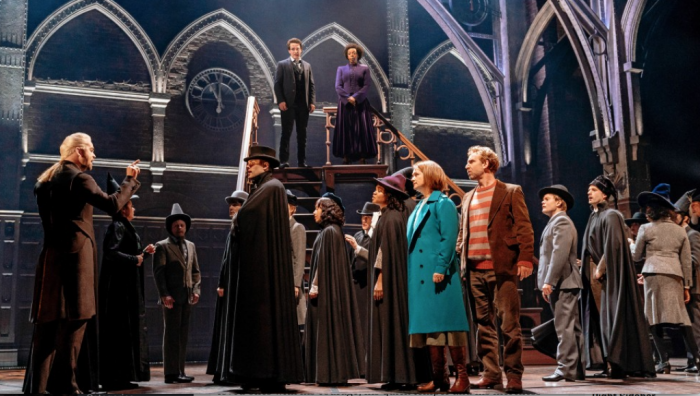 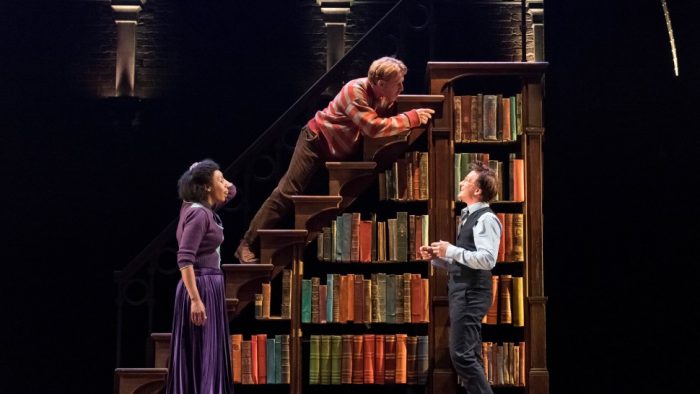 Rowling’s fascination with memory – its power, its many truths – gains momentum as it passes through our memory of reading her books. “We’ve been so busy trying to rewrite our own pasts, we’ve blighted their present.”

How have our familiar protagonists – the Hogwarts students, their teachers, their parents – grown up? How do their best and worst qualities serve them nineteen years later? How, for instance, does the adult Harry Potter – played by the brilliant Jamie Parker, Tony nominated for Lead Actor – shape his own fate and that of his loved ones with his courage, his quick temper and his merciless loyalty?

How are the personalities of Harry, Ginny, Hermione, Ron and Draco reflected and distorted in their childen: James Sirius, Albus Severus, Rose and Scorpius Hyperion? And how are these children bolstered and burdened by their parents’ legacy? 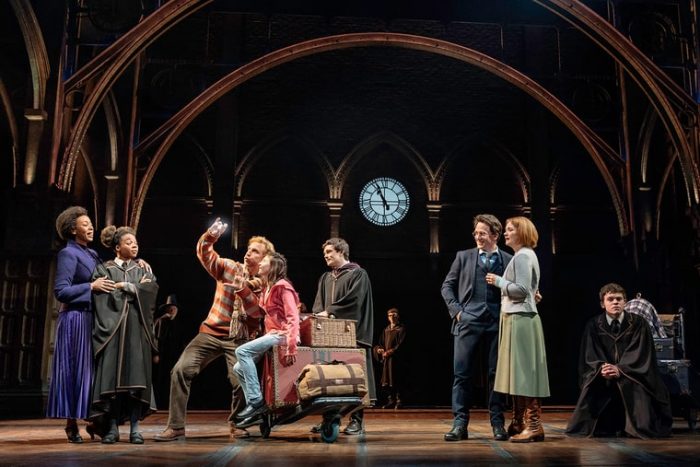 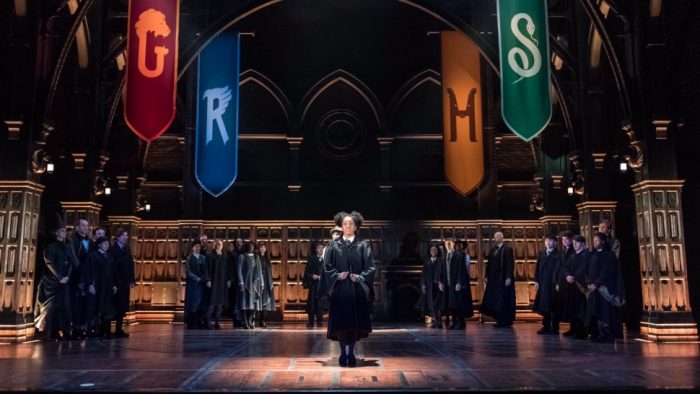 The Magic Of The Theatre
The second Cursed Child spell comes with its life onstage. Sitting in the gorgeous Lyric Theatre – HP renovated over more than a year – we are right there with the actors on a visceral tour through Rowling’s study of envy, expectation, duty, rebellion, hate, love.

We hear and feel the transformation of Scorpius Malfoy –  Anthony Boyle, deeply deserving of his Tony nomination – and his best friend, Albus Severus, as they tackle new Rowling dangers. The Stephen Hoggett-choreographed movement onstage – the stunning backdrops, furniture, stairways, the actors themselves – moves us through the arc of the story.

Rowling’s humour translates brilliantly into stage details. Imagine all that could and does go cattywumpus in a wizard nursing home. The theatre also allows for actor spontaneity – “You’re smiling!” –  when the unexpected happens, such as when Harry tosses a key prop a little too assertively and Draco has to run after it and hope it isn’t smashed.
~ 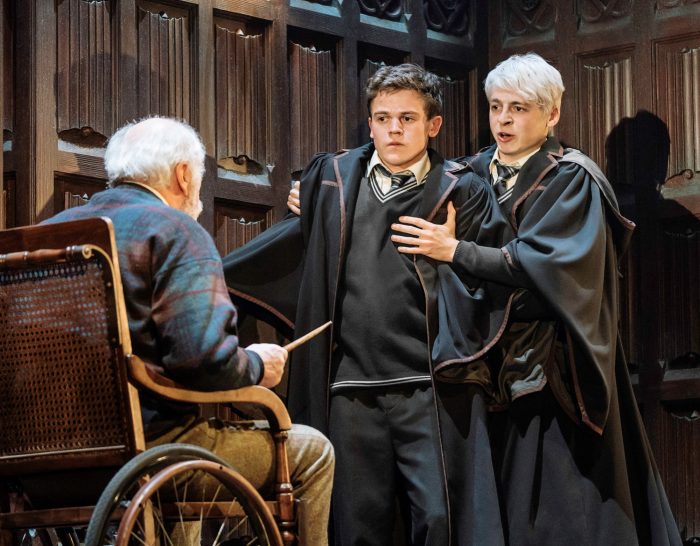 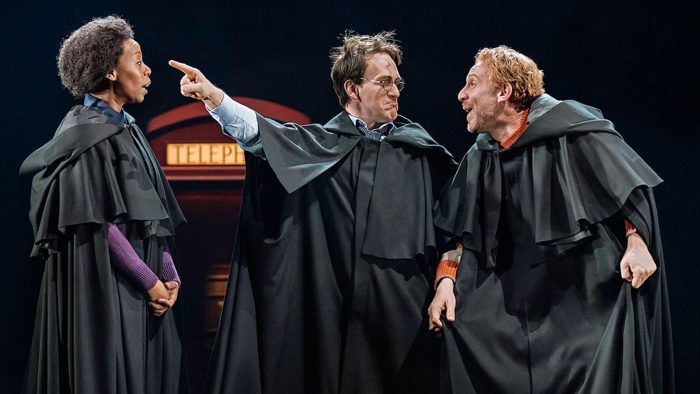 iii. The Magic In The Theatre
The stagecraft. Here is where Rowling’s most gossip-worthy secrets lie. The stagecraft in this show is like nothing we have seen before. Our mouths literally drop open; the crowd gasps. Christine Jones has been nominated for Scenic Design, Neil Austin for Lighting Design, Gareth Fry for Sound Design.

Here on Broadway, Jamie Harrison is in charge of Illusion and Magic. Given the onstage influence Harry Potter and the Cursed Child will have, it might just be time for a special Tony award for Illusion and Magic. “For this production,” Harrison says, “the magic already had specific rules and expectations, so sometimes the spells have to work as described in the books…Putting magic on stage is complicated. People can spend a lifetime dedicated to mastering the sleights of hand. It’s been no small undertaking for the actors, as some of the effects in the show involve a huge amount of practice and skill.” 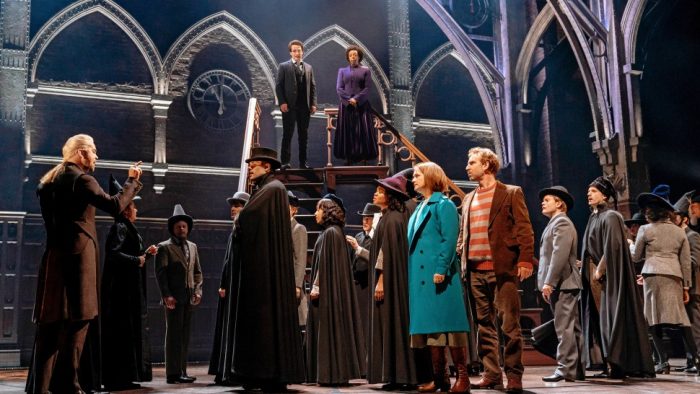 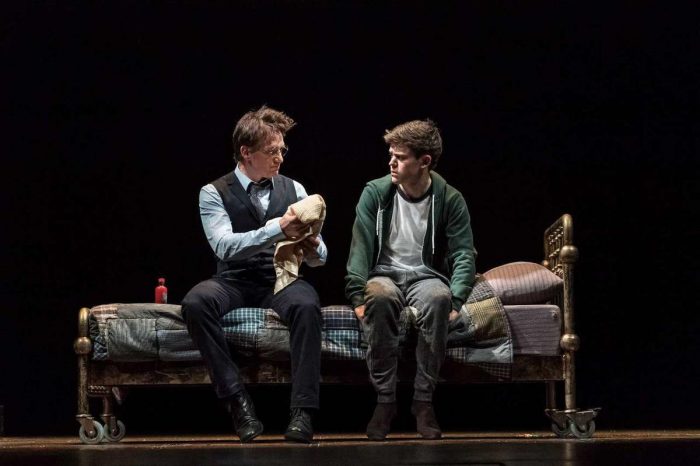 Notions we recognize from Rowling’s books – magical train travel, spooky dementors, painful polyjuice potion, dangerous time travel – are astonishing to watch onstage. Sitting in the Lyric, we the audience are sometimes included in the magic. As a number of people remark: “it’s like we’re sitting in the middle of a movie.”

There is a fight for tickets and – unless you win one of the Friday Fortys, with each Part priced at $20 – your wallet won’t thank you. But, Harry Potter and the Cursed Child is a truly magical production.