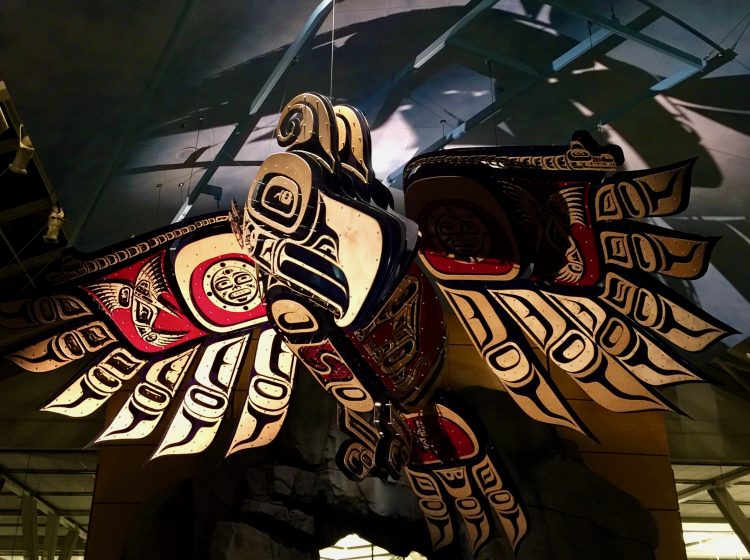 ‘The Thunderbird is the keeper of the sky. When she opens her eyes, the sun shines. When she ruffles her feathers, the wind blows. When she waves her great wings, lightning flashes; and when her wings slap together, thunder sounds. This Thunderbird, together with all the other creatures, is my grandmother: Hetux.’

Hetux greets you in the Vancouver Airport as you arrive from the US. The great bird was created by Connie Watts, a mixed media artist who shows internationally and who is of Nuu-chah-nulth, Gitxsan and Kwakwaka’wakw ancestry.

Watts’ grandmother, Louise Watts, is the inspiration behind this 21’x17’x15′ art piece that has weary travellers craning their plane-beaten necks for pictures. Crafted of stained baltic birch and blue-powdered aluminum, Hetux was installed in 2000.

“For me, my premise is that artwork is alive,” Watts told the Richmond News. “It often develops as the process goes along. It’s more organic, rather than so structured and business-like. And maybe it’s my upbringing, but we often don’t say things, we just do it.” Here is artist Connie Watts in a film by Marc Johnson. She is at the Museum of Anthropology, talking about her work and life experiences.