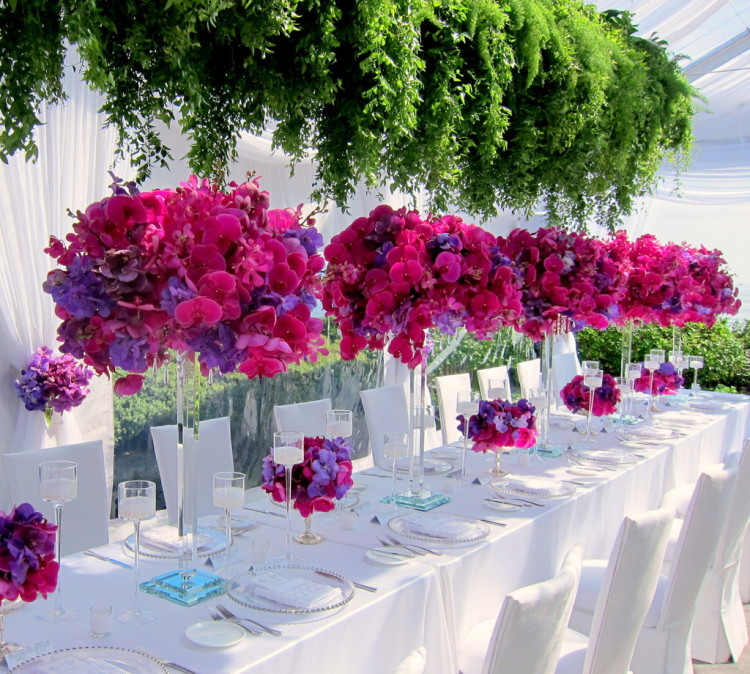 Marion Crane: “Do you have any vacancies?”

Hilary Miles has long been a fan of Psycho, Alfred Hitchcock’s 1960 thriller. “I love that movie.” She was thrilled when she was asked to bring her floral wizardry to the set of Bates Motel. “ It’s the story of Norman Bates as a teenager. It’s on A&E and it’s one of my favourite shows.”

For this contemporary prequel to Psycho, Miles – who has long created flowers for Hollywood North sets– gets to create a blend of old-fashioned and modern arrangements. Mother Norma Louise Bates, played by Vera Farmiga, lives in “an odd home. It’s the house from Psycho, so she might have simple daisies on the counter. But then she went to a gala that was extremely modern, so I got to do high-end flowers for that.” 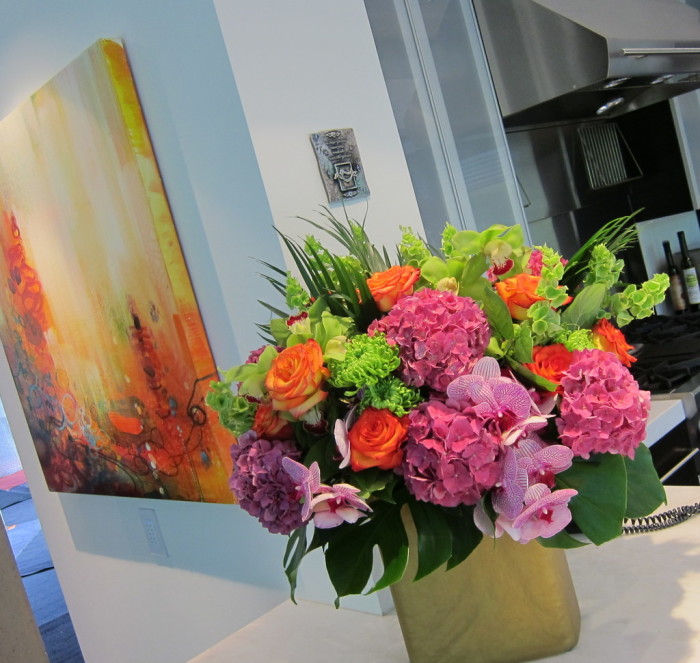 Miles started working for the film industry from the moment she opened her first flower design studio at 6th and Granville more than twenty years ago. She had grown up in the flower business, first as a helper in her uncle’s Seattle flower store from the age of 8. Miles took a job at West Van Flowers when she was 13, ran a flower shop in the Middle East in her twenties and, at the outset of the Gulf War, came back to Vancouver.

She soon developed a reputation for her artful, modern flowers and Hollywood came calling. It helped that she had a highly visible space across from the old Vancouver Sun Newspaper Building. “Back then, Movies of the Week were being filmed constantly. I’ve got a good relationship with the film industry. They have very specific demands.”

Her list of imdb credits is impressive. Once Upon a Time, 50 Shades of Grey, Twilight New Moon, World of Warcraft, Twilight Eclipse, Sister of the Traveling Pants, L Word, Fantastic Four – for the smallest of samplings.. 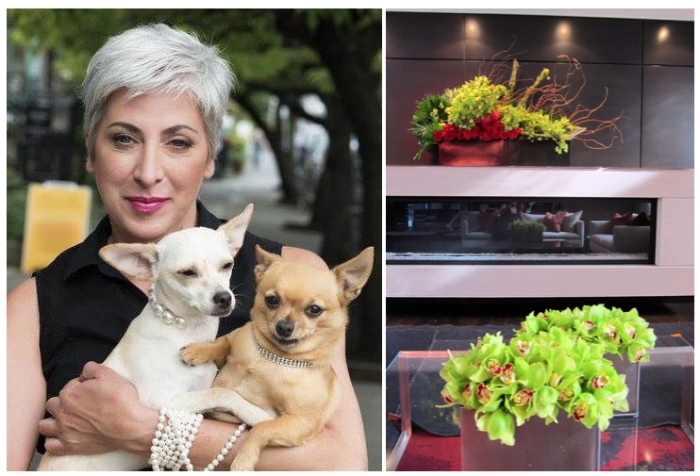 Recently, Miles has enjoyed working on Steven Spielberg’s adaptation of Roald Dahl’s BFG. That is, the Big Friendly Giant who eats snozzcumber, bottles dreams and rescues orphan Sophie from the horrid Mrs. Clonkers. “It’s set in the 1970’s in Buckingham Palace. The 70’s unfortunately means things like carnations and daisies, but we make it very pretty.”

As Hilary Miles established itself early as a film industry destination – rather than a site reliant on walk-by traffic – Miles could move her business to a not-yet-thriving 1st avenue location, after the South Granville building she leased was sold in 1994. “The 1st Avenue building had the right feeling I wanted. It’s a basically a concrete shell, a raw space which is a great setting for flowers.”

Of course, with the local film industry prone to sporadic lows that rival the highs, Miles could not afford to rely solely on Hollywood to drive her business. Luckily, she has also developed a clientele in weddings and corporate.

“Last year, we did a fantastic wedding for Carlos Ancelotti, then coach of Real Madrid. It was just a spectacular event that ended up being covered in Spanish Vanity Fair. It was stunning. There were only 60 guests – a perfect guest count, I think – sitting at two long tables. It was the best food, the best flowers, the best tables. The flowers were magenta and purple varieties of orchids.” 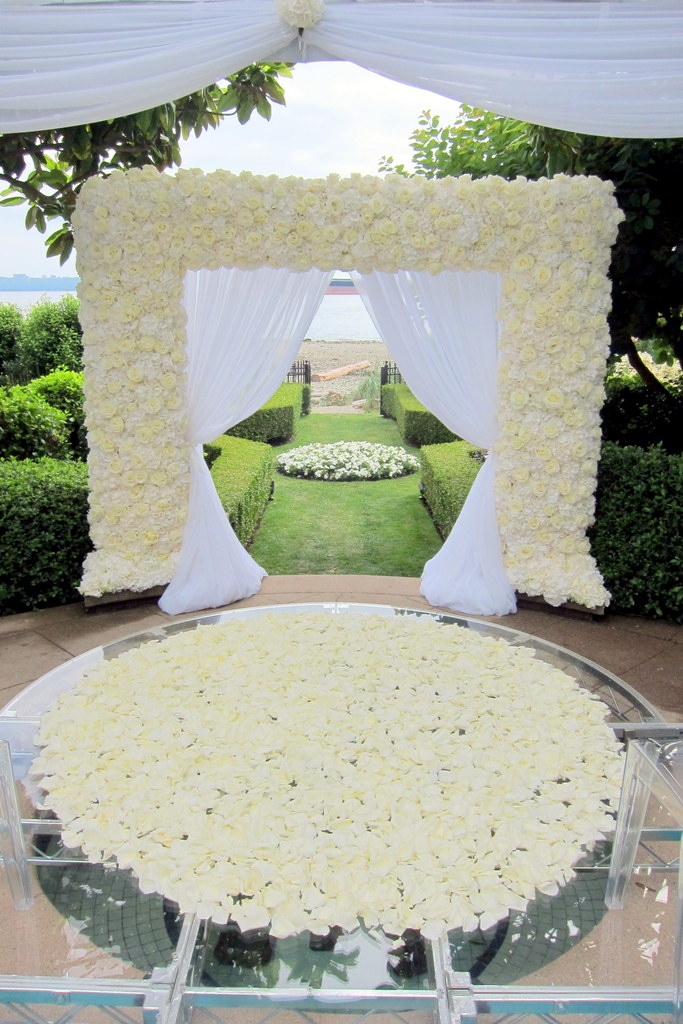 Wedding pictured here and in our header photo

Miles also feels blessed to have wonderful clients who drop by to pick up fresh offerings. “I’ve been here so long, a lot of my clients have become friends. You are with them when they get married, when their kids graduate, when their parents die. Flowers are an emotional thing. When someone dies, the flowers are your last gift to them.”

Most visitors to the studio will zoom over to visit the three wee dogs who sit in their own baskets atop the front counter: Lola and Eloise – Miles’ dogs and Poppy, who belongs to Lydia. “Lydia and Jehna run my store and are both amazing designers. Lydia has been with me for almost 11 years, and Jehna for over 7 years! They are like family.” If you work for Miles, you can bring your dog with you. “I have 2 dogs. I wish I had 102.” 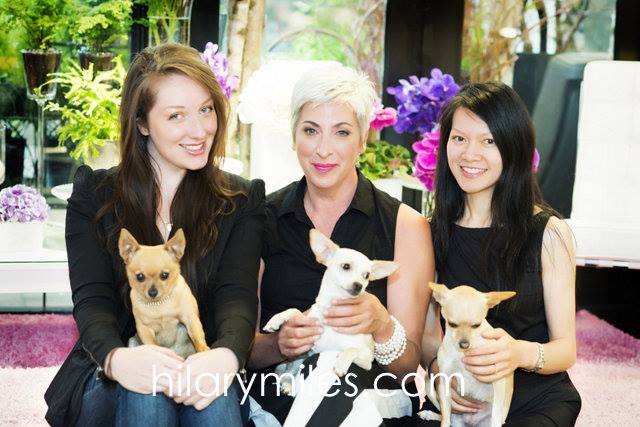 Miles has rescued dogs herself and has worked tirelessly to help dogs in shelters find new homes. “It’s so hard for rescue organizations to raise money and there are so many costs involved.”

Miles is delighted to be involved in the Four Legged Flower Power Photo Shoot, designed to raise money for Big and Small Rescue. The idea is for dog owners to bring their own dogs to Maple Ridge on July 4th or Industrial Avenue in Vancouver on the 5th. The Hilary Miles team will create custom floral doggie crowns and each pup will then be photographed by the “freaking spectacular” photographer Tanya King. The cost is $50 and all proceeds will go to support Big and Small Rescue dogs. 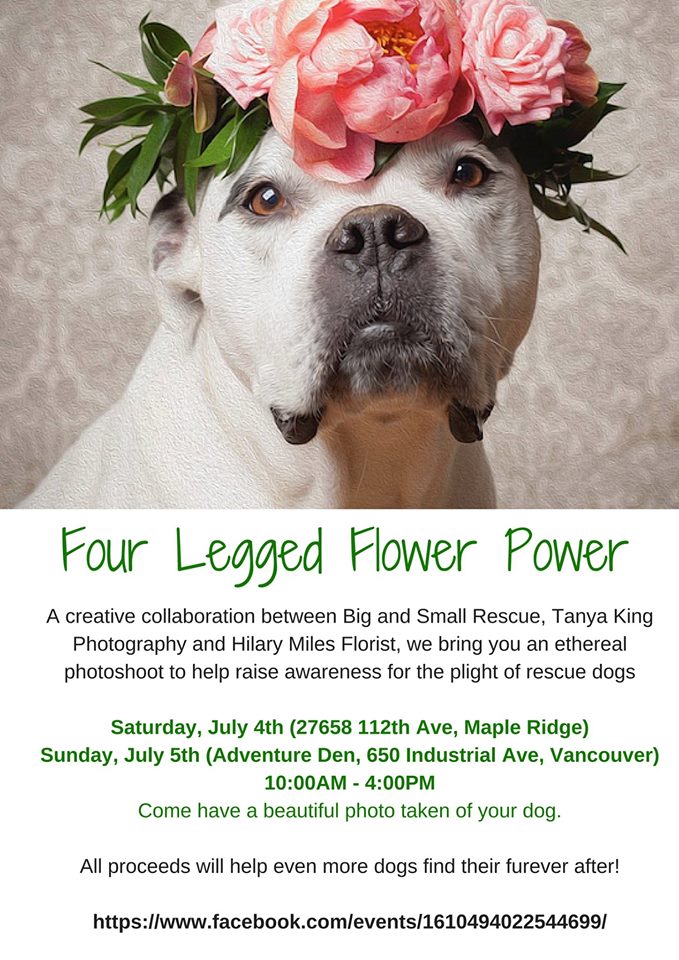 “We are going to pre-make a bunch of girl and boy crowns. It’s fun for me and my staff. We all love dogs. It’s a real honour to be able to donate our time and product.” In fact, if and when Miles retires, she would like to open an older dog sanctuary in the Interior.

What advice would Miles offer to a new generation of floral designers looking to get into the industry?

“I would say if you want to get into flower design, don’t bother taking any design courses. Go work in a store; start from the bottom up. Work for someone you admire. It’s brutal from the beginning, all you are doing is cleaning flowers. But you should know the industry inside out, before you start on your own. It’s a perishable good. You’ll lose money if you don’t know what you’re doing. How do you condition flowers? What mixes with what? How long do they last? It’s a complicated business.”

It’s a complicated business that Miles loves. “I’m living this incredibly creative life. I feel so fortunate. I knew what I wanted to do when I was 5 or 6 and somehow I’ve made it work. I’m not rich; I’ll never be rich. I’ve just been lucky.” 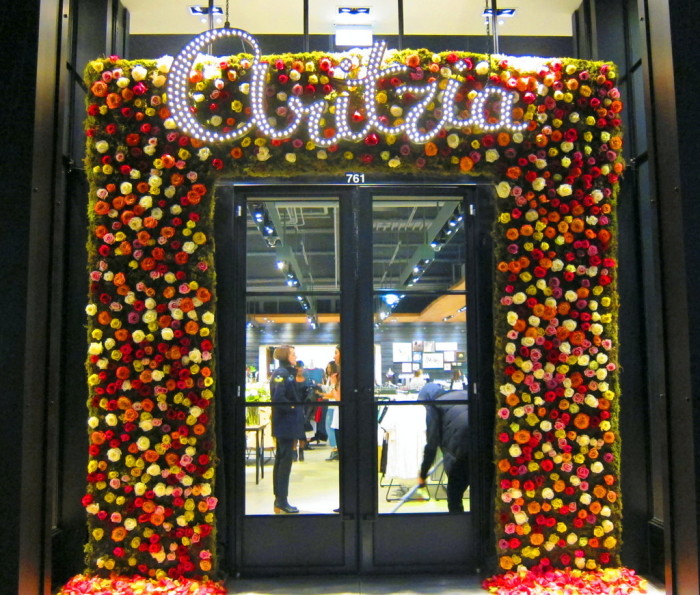 The Bard And Our Beach 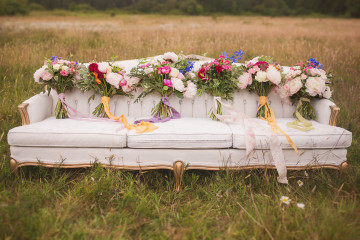 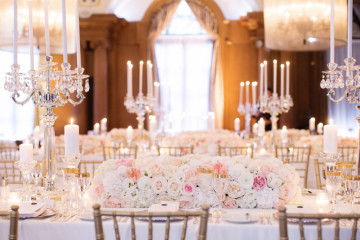 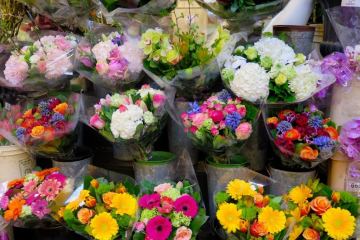