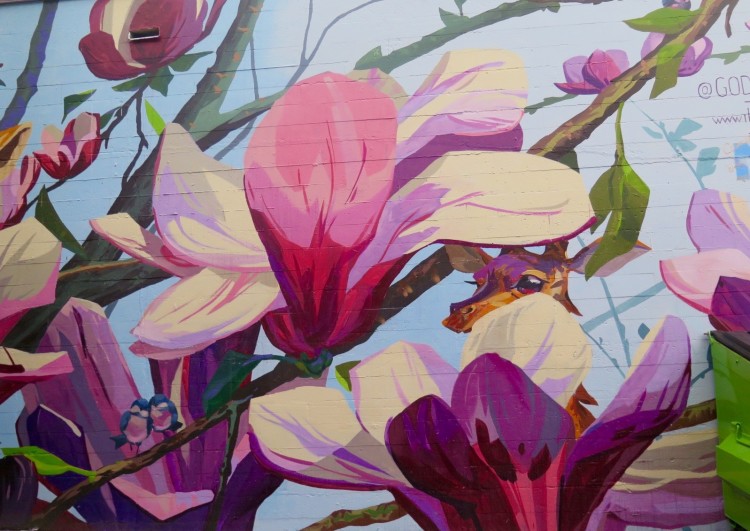 He started last November. If your daily travels take you to the west side of 8th and Main, you might have seen Ilya Viryachev. He was in the alleyway, evenings and weekends, rain or shine, painting a giant mural.

“It is always daunting to be looking at the blank wall,” says Viryachev, “and realizing what a process it is going to be. But that is the great part of it. It is like climbing a mountain, one step at a time. I love the feeling of painting with a large brush. It forces you to be brave and make decisions. I also like the fact that there’s an end and a final result that everyone can see.”

In this case, the end came in February and the result is In Bloom, a gorgeous mural that is livening the walk for residents and attracting new visitors. The project was supported by the City of Vancouver and the Mount Pleasant BIA. 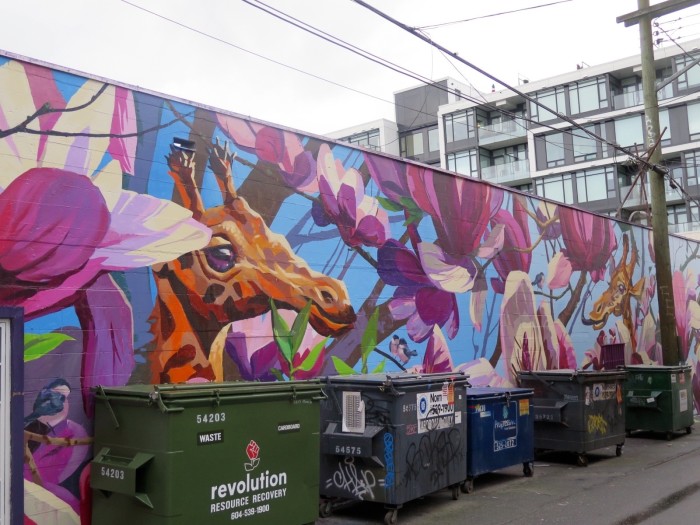 “I started thinking of the design last spring after having taken photos of the blooming magnolia trees that were on my way home,” explains Viryachev. “I love how beautiful Vancouver gets, and I wanted to create a painting dedicated to it, especially seeing how many complaints about Vancouver are out there. I think that’s what got me thinking about the positive message.”

“I love painting animals and studying their structure and anatomy,” Viryachev adds.” Coming from an animation background, I really enjoy exaggerating their shapes. It feels more forgiving when you paint animals and push their design. I knew I wanted some sort of characters in the image, and playing with scale made sense to me so I painted the giraffes. They would have to lift their heads up high into the blooming flowers to get their food.” 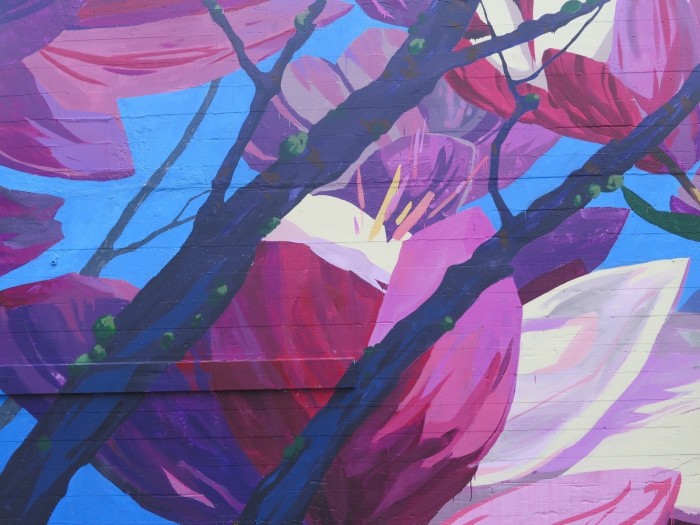 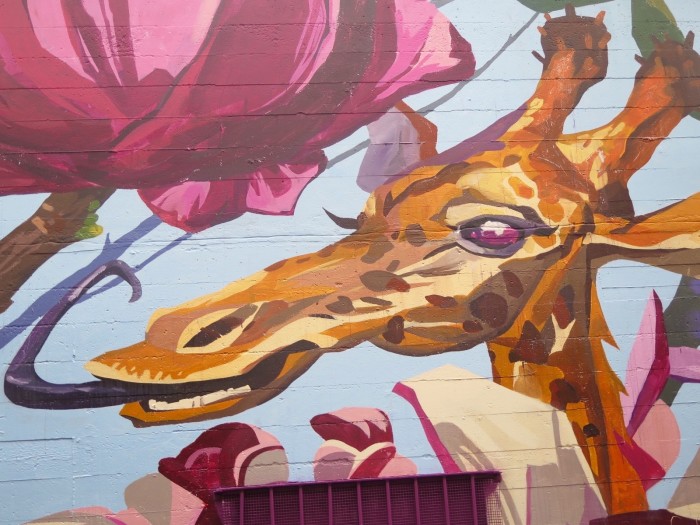 For the In Bloom project, Viryachev worked alongside young people from the neighbouring Mount Pleasant Community Centre. It was the youth who inspired the chickadee birds that Ilya painted throughout the mural. He laid out solid shapes on the wall, so that when the young team came, they could get right to it. “I just had to make sure that everyone had the right hues and tones,” Viryachev explains. “It was really fun to paint the wall with the youth. They came out about four times, and I could barely keep up with them. I hope I will be able to paint with them again. They were really excited about creating art.”

As you’ll see in the lane, each of the young artists signed the mural. “They played a part in making our community more beautiful and I think that is something worth remembering.”

In his day job, Viryachev works as an animator and concept artist, now at Roadhouse Interactive.  “I am really excited about the game I am currently working on – Iron Maiden: Legacy of the Beast. It is such a huge project, and a lot of responsibility knowing how much Iron Maiden art means to their fans. I got to create a large variety of concepts for it and I look forward to how everyone is going to react.”

Ilya also creates indoor artwork, such as When Left Alone, part of an Artists series for Ted X. “The body of work I was able to produce was more mature in comparison to my previous exhibitions.”

Viryachev got his start in murals after securing a spot in a studio with some talented, local artists who invited him to participate on a mural project. He was delighted to be involved with Many Hands Make Light Work, a lovely piece led by Andrew Young.

“He wanted to create it over the weekend, so people from our studio got together to collaborate on it,
says Ilya of Young. “I remember being scared of how much effort it was going to be. It was that lazy part in my brain speaking. I may have thought of dropping out actually, but I am really happy that I showed up to paint. After we finished it, I got hooked.  Many hands made light work indeed.”

Time after time, Viryachev has been reminded that murals are not easy. The biggest challenges? Weather and time. “The most recent piece I finished, I worked on it during winter, which meant it got dark around 5pm, and it would rain a lot. Since I work full time, I could only paint on weekends and evenings. And in order to paint in the evenings, I bought myself a flood light, but it was still challenging as the colours would appear really distorted in the dark.  A couple of times it rained after I had painted during the day, and half the paint would wash off.”

It’s not easy, but Ilya is all in. His mural works include Through The Cracks, a Spider-Man-inspired, 49 foot wide mural, painted between 3rd and 4th Avenue on Columbia Street.

Next up? Viryachev is not sure, but he is on a hunt for the next wall. “My goal for this year is to work on as many murals as I can.”