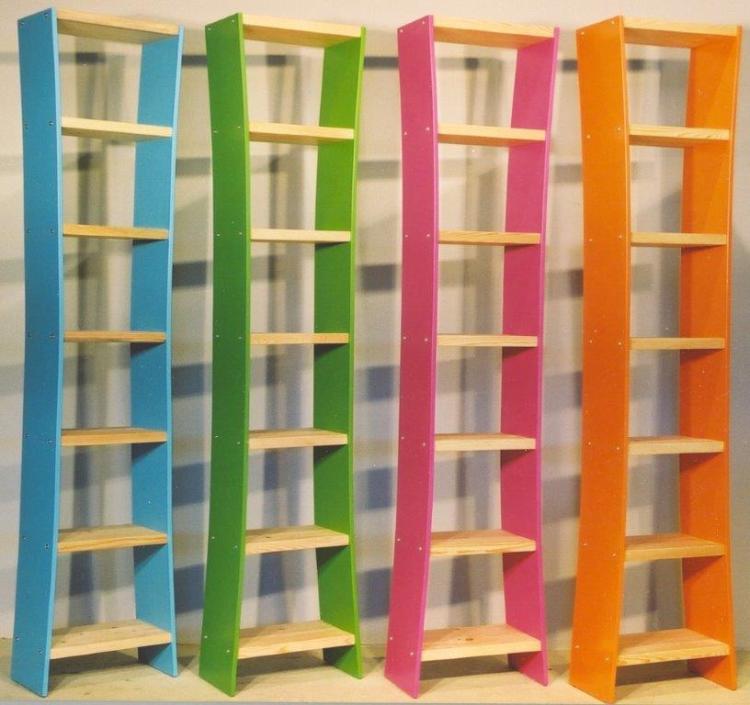 This is the home of an artist, blood to bones. When Izabela Gereb opens the door, she is in a floor-length dress of many colours. A knitted dress of her creation. A chorus of faces is there to greet me – the ever-warm Gereb herself and a wall of her character-rich portraits.

From room to room, there is the artwork of friends, beaded travel treasures and more evidence of Gereb’s eclectic artistic abilities – dancers in motion, reclining nudes, one-of-a-kind chairs, tables, medicine cabinets. A headless mannequin wears a cozy grey and white dress/coat that Gereb knit when she was living in Paris so many years ago. “People were wanting to buy it, but it kept me warm.” 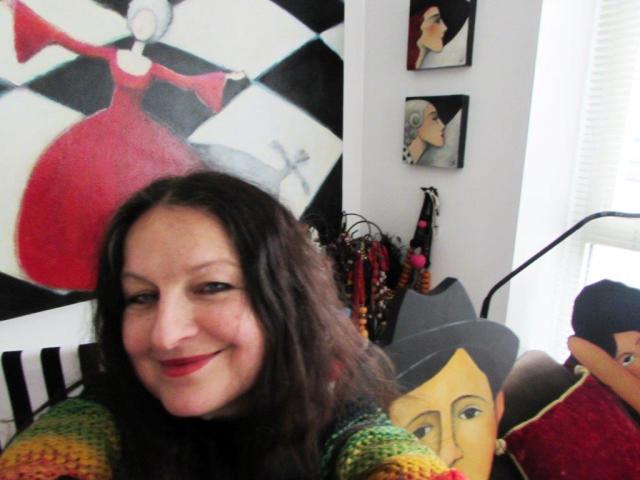 Perched up on display is one of Gereb’s first and favourite pieces – the Red Apple Chair. “This one I made out of brooms in my Montreal bathroom.” 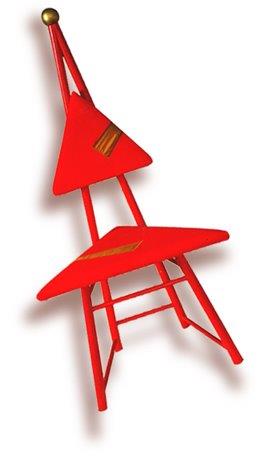 It is no surprise that Izabela comes from a colourful family. She grew up in Poland with a “very talented” mother, a brother – “a musician who played 24 hours a day on the piano and other instruments,” and a sister – “now a doctor in Boston. She was also very talented as an artist.”

Gereb’s father worked as a bank director, “but he had a life like James Bond. He was fighting against Communism and had multiple identities.” Imprisoned more than once during Stalin’s time, he was able to slowly ease out from the underground after Stalin’s death. Like his daughter, Izabela’s father liked to try his hand in multiple arenas – writing, bee-keeping, inventing medicines to save bees.

Izabela started knitting clothes with her Grandmother at age six. “Before each summer, I would have a little show, sell everything and use the money for our travels.” After high school, she went to a Romanian university in Brasov – now the University of Transilvania – to study furniture design. The school was rooted in Bauhaus and “far better than I thought it would be.”

Gereb ended up getting her Masters with a specialty in Art Nouveau. Her final project involved the design of a restaurant, but she also wrote a book with 400 hand drawings showing differences in furniture ornamentation across the world. She planned to make copies, but the book mysteriously disappeared during an exhibit in Bucharest. “So strange…”

She went back to Poland to work in a design office before heading to Paris to immerse herself in French and art. “I was standing in front of Monet’s La Cathédrale de Rouen and it was so beautiful, I kept crying, People walked by and wanted to help me. It was one of these incredible moments, because the painting had almost an inch of paint. It was three dimensional, like a sculpture.” It was in Paris that Gereb was inspired to start painting more. 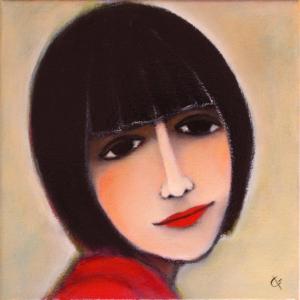 From Paris, it was onto Montreal to open a gallery with friends and then to Vancouver with her ex-husband. Here, she found herself in high demand for interior design. “Kitchens, restaurants. Sometimes 14 jobs at the same time. It was quite chaotic.”

The work came through word-of-mouth. There was the much-celebrated interior of the Amadeo Coffee shop in West Vancouver, a chateau in Holland and the British doctor who wanted a change from the typical sterile medical office. Gereb brought him a colourful space inspired by his love of Rothko and Brazil.

Izabela even moved for a time to Lytton to design an extension for a sawmill. While there, she dug up some tools and started making products out of the abundant waste wood. Her garden chairs – crafted from the too-short-to-sell 2 by 2’s –  were particularly popular. 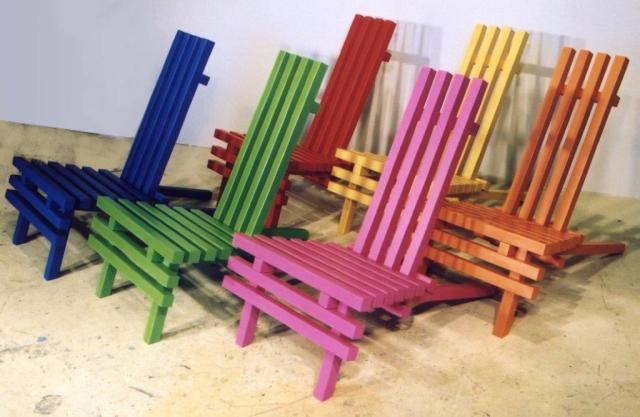 Gereb had always understood the need to balance art and commerce – to savor the ‘steak’ and the ‘art’ – but her schedule started to feel unbalanced. “I had no life. I was overworked and running between jobs. Designing was about 10%; the rest was listening to contractors.”

She decided to devote more time to furniture design and painting. Izabela found studio space, first in The Ironworks then at 1000 Parker. She appreciated the artistic community and the ability to repurpose materials. “I have recycling in my blood. People would just leave wood and mdf and canvases close to the garbage bin.”

Some of her work paid tribute to Modigliani. “I really liked his spirit. He was a loving man. For example, he would sell a painting and then use some of the money to give flowers to women. It didn’t matter if they were old, ugly or pretty. Unfortunately, his end was tragic. He died from tuberculosis. His pregnant wife committed suicide the day after he died.”

Over the years, Gereb has sold over 1000 pieces of furniture and 300 paintings. She was delighted when Michael Jackson (not that one) bought the table below. A small group from Connecticut bought another of her tables and gave it to Obama (yes, that one) on his inauguration day. 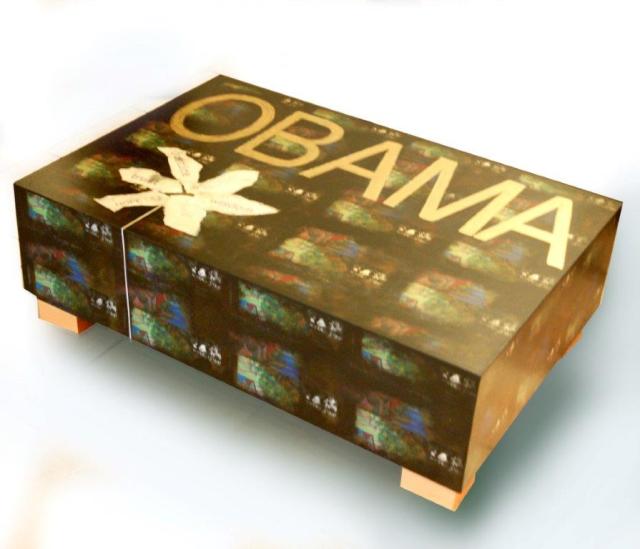 She surrounds herself with a vibrant community of artists, including three “who were all born on February 27th, the same date as me. I think we are all fragile, creative, not business minded, yet hardworking.” 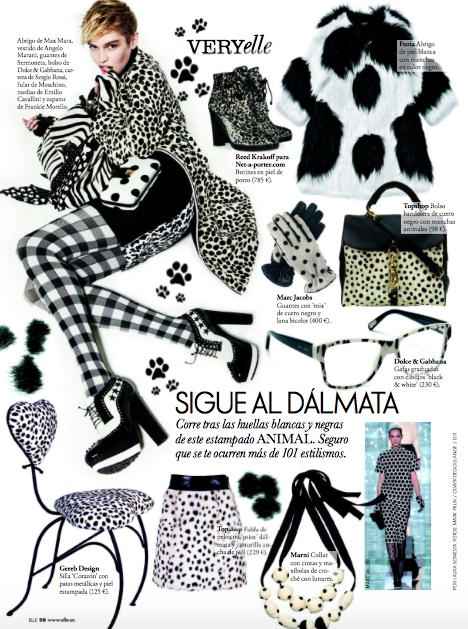 One of Gereb’s chairs in Spanish Elle Magazine

Gereb enjoys her artistic freedom. “I cannot imagine being told what to paint by a gallery. Do 15 paintings in the same style…” While she is painting, she enjoys listening to music from Cesaria Evoria to Jean Leloup. It is also important for her to give back. “I found myself spontaneously volunteering to teach kids to swim on the beach in Senegal.”

Recently, she has been running a program on upcycling old clothing into fashionable outfits at the Roundhouse, Britannia and Coal Harbour Community Centres. 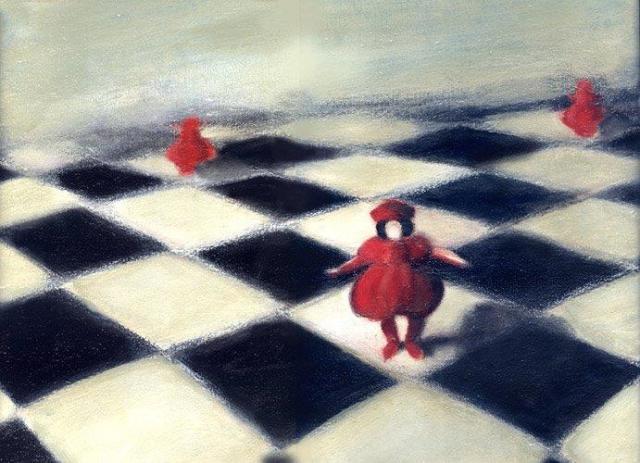 Where does someone with such an adventurous background see herself in the future? “I am considering living part time in Ecuador – I have friends there – or Mexico. Somewhere warmer. I feel at home in Mexico, in the colonial cities. I would love to have a gallery and do furniture and paint and fashion and involve some local people.”

“Because life,” as Gereb says, “always bring new avenues for expression. My main mission is to bring joy.”