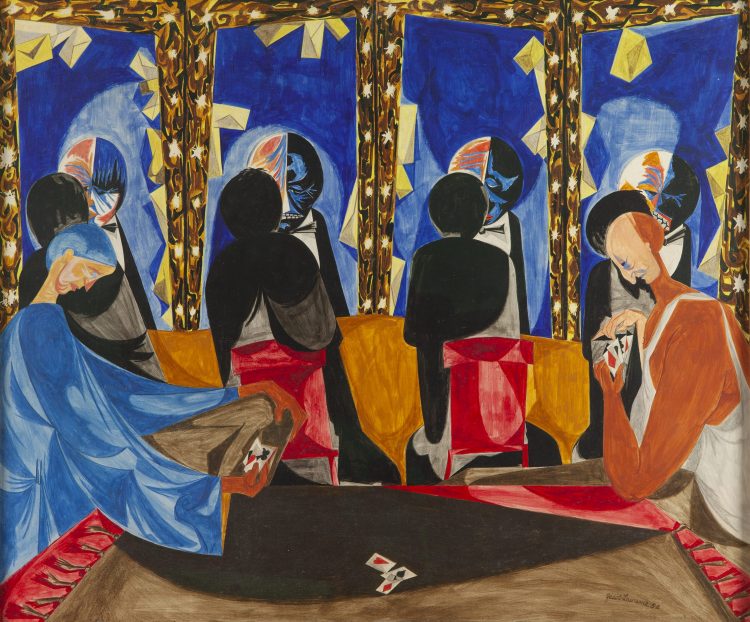 In 1949, American painting prodigy Jacob Lawrence checked himself into Hillside Hospital’s psychiatric ward in Queens. Exhausted, depressed, he remained there for a year, getting treatment and painting his Hospital series.

After checking himself out in 1950, Lawrence sought new inspiration in Harlem nightclubs and theatres like the Apollo. As Lawrence said in a 1992 interview: “One of the most vivid forms of recreation that I had, as many in the community had, was visiting the Apollo Theater, and the Apollo became an institution in the community. There were the comedians, there were the chorus girls, and there were the big bands. And I would go once, they would change the show every two weeks I think, and I would go, and you would hear the comedians.”

It was these visits that spawned Lawrence’s 1953 series: Performance: A New Series of Paintings in Tempera by Jacob Lawrence. Our header picture, Makeup (Dressing Room), is a 1952 painting from this series which both depicts life backstage and incorporates Mbunda masks.

Though Lawrence passed on June 9th, 2000, his Makeup (Dressing Room) is being presented by Jonathan Boos at The 2021 Winter Show. For over 60 years, The Winter Show has exhibited art, antiques and design at New York’s Park Avenue Armory. The event benefits East Side House, which this year is helping families in need get food during the pandemic. In 2021, of course, the show is running online.