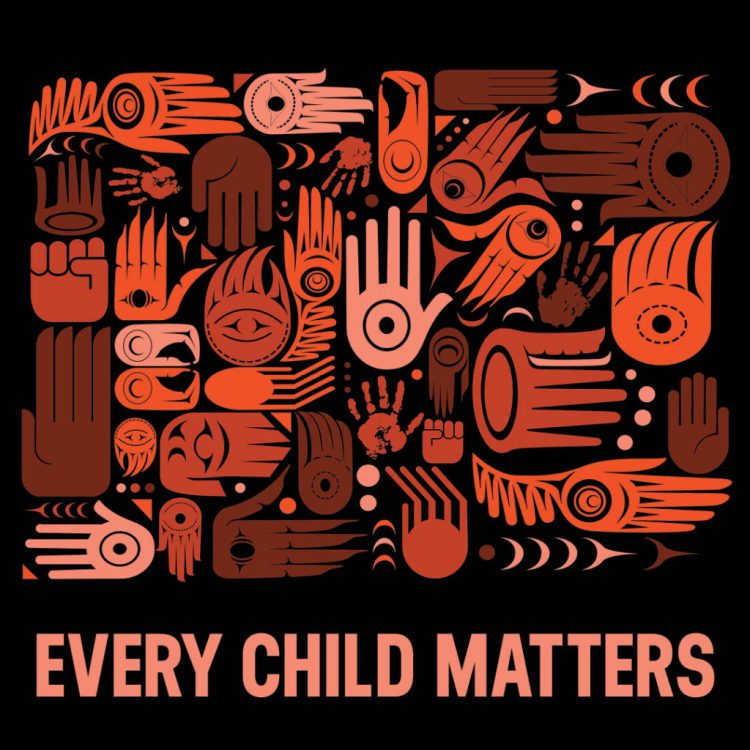 Today, on the National Day For Truth And Reconciliation, we are humbled to be wearing a beautifully moving orange t-shirt created by artist James (Nexw’Kalus-Xwalacktun) Harry.

Harry’s work – captured above – was designed for Arts Umbrella, with all proceeds going to UNYA, the Urban Native Youth Association, to benefit their work with local Indigenous youth.

As Harry said in a recent CBC interview: “We’re at a really imperative time right now where the Indigenous people, Salish people, can start to voice who they are, so we don’t feel invisible on our land anymore.”

Harry was born into an artistic family, with his father – Xwalacktun (Rick Harry) – a master carver of the Squamish Nation, and his mother – Jennifer Kleinsteuber – a mixed-media artist and painter.  After graduating with a B.A. from Emily Carr University of Arts and Design, Harry has gone on to create public artworks across the Province, and to win multiple awards.

In the 2022 CBC interview linked below, Harry says: “I’ve always been curious about how our art forms came to be…I always felt this inner sense to explore these abstract forms that are rooted in Salish art, that mimic the landscape itself. When I was studying water or how fire moves, I noticed a lot of similar shapes that would have been seen in Salish art, so I started to delve more into that”.

“As Indigenous people,” Harry says later, “we were observers of nature, we were part of nature, we never thought of ourselves as separate from nature. We were just interconnected.”

We see this powerful notion of interconnectedness in Harry’s 2022 Every Child Matters shirt, where all manner of hands – eagle talons, bear paws, human palms – come together in equal power.

As Harry writes on his website: ‘There is honour and responsibility in carrying on the teachings of my people.. As a young First Nations person, I would like to honour and respect my traditional heritage. As a contemporary artist, I feel the urge and the need to create something new and different.’