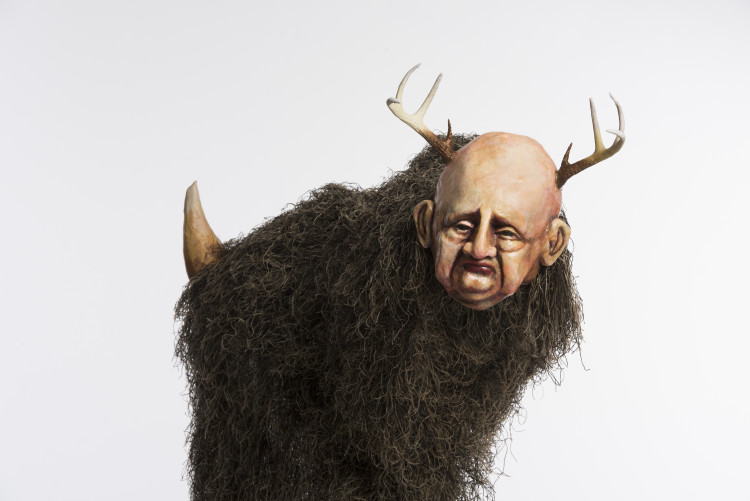 Look into the faces of the creatures who find life in the hands of Peter Balkwill, Steve Pityu Kenderes and Judd Palmer. Piercing puppet eyes rest on weary wooden faces. There will be an adventure, but the worst is yet to come.

Balkwill, Kenderes and Palmer are the masterly artists behind The Old Trout Puppet Workshop. They have mounted stage-shows, toured internationally, created short films and carved lead characters for music videos like Feist’s Honey Honey. How do they create such alluring puppet protagonists?

“What makes for a particularly compelling character,” says Judd Palmer, “is the sense that the character has some kind of secret. It’s tough to define how you find that in the carving or the sculpting, but you know when you’ve found it. A certain kind of sorrow seems to come out of everything I make. Not sure why.”

Has Palmer ever created any puppets that look like him?

“We Trouts made a show awhile ago called The Last Supper of Antonin Carême, about the first celebrity chef. We followed his whole life, from when he was dropped off at the gates of Paris by his impoverished Dad, to becoming a street kid, taken in by a baker, on up to becoming the greatest chef in Europe. Such a good story for crying out loud.”

“So we made versions of Carême as an urchin, a teenager, an adult, an old man, and folks thought I’d inadvertently carved him with my own face. Could be true. Didn’t mean to. Maybe that means it’s authentic and true, or maybe it means I’m a blazing narcissist who forces his own features onto an audience. Not sure. Maybe most art straddles that line.”

The Old Trouts made their puppet pact at a ranch in Southern Alberta. It was 1999, Y2K was looming and Palmer and his friends were looking for an independent, creative way to make a living. 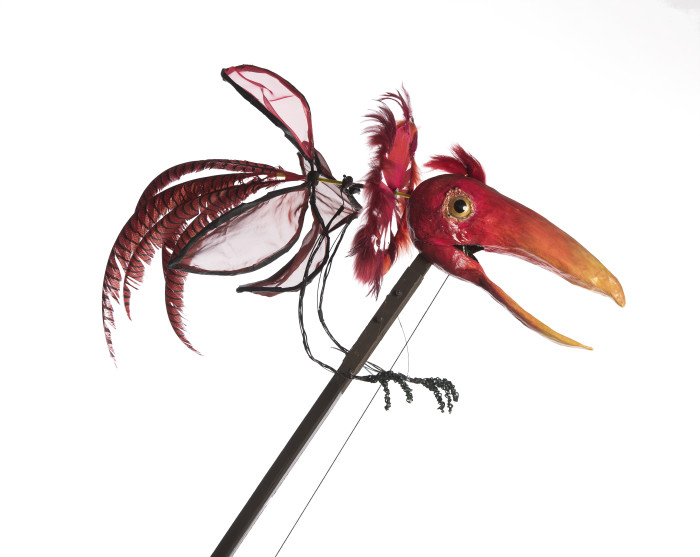 This is a polymath group. Palmer, for instance, is a sculptor, actor and a musician who played the slide banjo in the Agnostic Mountain Gospel Choir: “a stomp-and-holler old punk blues band.” He is an illustrator and writer whose Preposterous Fables for Unusual Children have twice been nominated for the Governor-General’s Award for Children’s Literature. So, how did they settle on puppets?

“Surviving in the arts is all about finding your niche,” says Palmer, “some peculiar little corner of the zeitgeist that you can call your own. In this way, you can avoid actual competition, which is a super bonus for odd folks like us who wouldn’t last long in the general fray. Back in the day, puppets for adults seemed like an area that wasn’t as crowded as ‘theatre’ or ‘sculpture’ or ‘writing books about child-wizards who go to magic school,’ and so, like fierce and clever birds of prey, we saw a growth market and swooped down upon it.”

The swooping was successful. The Old Trout Puppet Workshop has won multiple awards. You might have heard that they are behind the Vancouver Opera’s upcoming version of Hansel and Gretel. We will get to that, of course, but first some of their other creations…

One of the Old Trouts’ best-known shows – Famous Puppet Death Scenes – premiered almost a decade ago at Vancouver’s Push Festival. It was a hit and continues to tour. 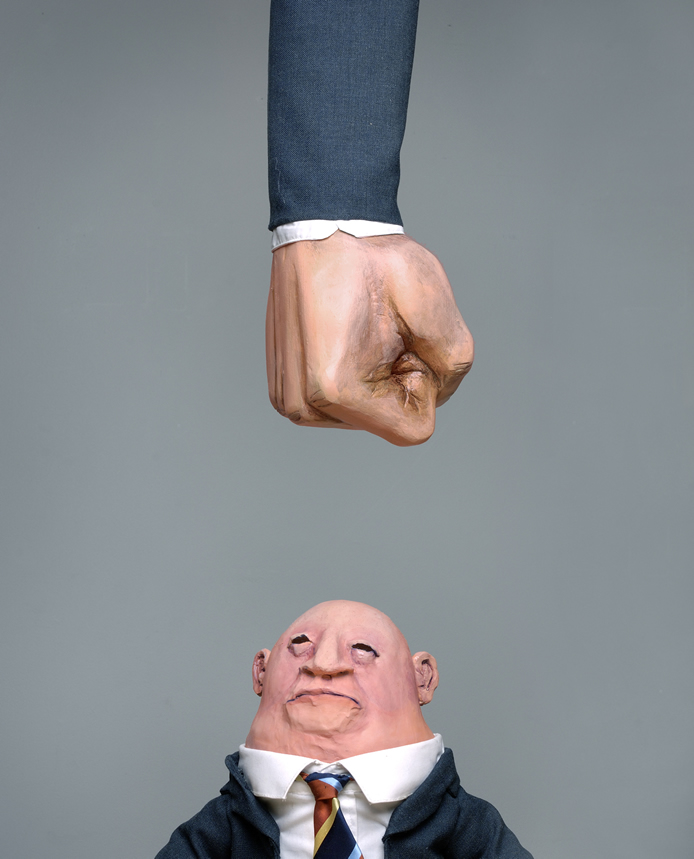 “The concept came from a moment in our version of Pinocchio,” says Palmer. “In the actual book, Pinocchio kills the cricket. Beats him to death with a hammer. It’s horrible. But we put it into our version too, and in some ways it was the best part of the whole show, because it was the bit that startled and confused and interested people. The first hammer blow they were shocked. The second they started to laugh. The third suddenly they realized how sad it was. The fourth they were outraged. The fifth they were facing their own mortalities – it was an existential roller coaster.”

“And so we thought to ourselves: what if we did a show that was all as good as that? Do we really need to bore everybody with the plot stuff that we all already know inside and out from ten zillion stories told since time immemorial? So we decided to make a show that was entirely made up of the climactic moments, where a puppet dies in a particular show. And then we pretended that the shows were famous, so in theory the audience would be already familiar with them. So it’s like going to see all the deaths from Shakespeare, condensed into one evening.”

Two years ago, the Trouts made their first Christmas special, From Naughty to Nice, with the National Film Board. “It’s about Santa, back when he was a greedy, nasty little kid, with an army of elves who made toys just for him. You’ll never guess what happens. But it was a ridiculous amount of fun to do. It’s so rewarding, as a guy making puppets, to be able to put the audience’s eye – the camera – right up next to your work. Finally, they can see all the little intricacies you’ve carved into it, which are invisible from any distance. It allows a new kind of expressiveness in the sculpting, which I really loved.

And this month we are lucky to see the work of Judd Palmer and the Trouts in the Vancouver Opera’s production of Hansel and Gretel. The VO has commissioned Russian composer, Anatoly Korolyov, to re-orchestrate Englebert Humperdinck’s score for the Vancouver Playhouse setting. The 24 year old conducting prodigy from Scotland, Alexander Prior, will be at the baton.

Hansel and Gretel will introduce an exciting cast of Old Trout Workshop puppets. The BogDeer is hunched in our feature photo and the Cuckoo Bird is squawking above. Both were photographed for the Vancouver Opera by Emily Cooper.

“Vancouver Opera called us up,” explains Palmer, “because they were doing Hansel & Gretel, and the intrepid director, Brenna Corner, wanted to do it with puppets. We got brought in to design the set, props, costumes, and puppets.” 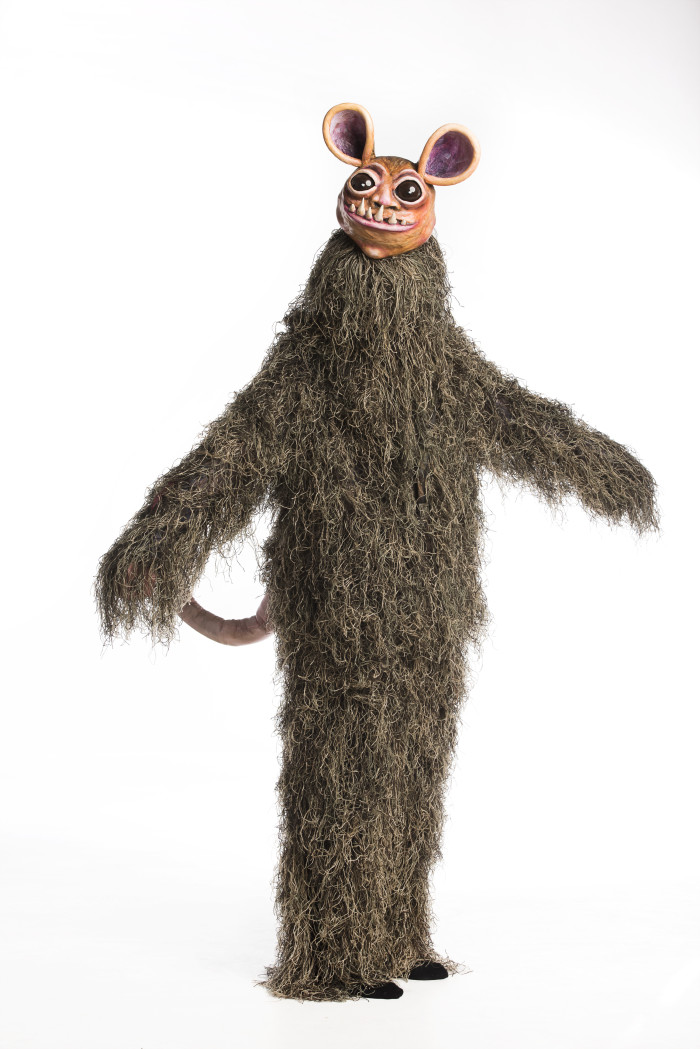 The experience has stimulated a deeper appreciation of opera in Palmer. “It’s a newfound love for me. I like to go to the opera, but I must say it’s pretty wonderful to sit in the rehearsal hall and hear all those voices right there in front of you. Now I want to be an opera singer. I mean, it would be pretty great at a cocktail party, when somebody asks what you do, to be able to say: “Me? Oh, I’m just an opera singer.”

It has been a fun challenge for The Old Trouts, especially trying to connect the singers’ voices to the puppets.

“Normally, of course, the puppeteer makes the voice, but you can’t expect an opera singer to suddenly learn how to be a puppeteer, and even if you could, they’re already doing a kind of superhuman thing and it just might be a bit too much to expect to make them do this other thing too. So the puppet concepts had to be pretty clever.”

When designing puppets, The Old Trouts will sometimes start right into the wood or clay, waiting for the face to reveal itself.  “Wood is stubborn. There are knots and grains that push back against the execution of your idea – real gravity, physics – which actually pushes you to discover solutions that shift the image, which means the process leads to surprises even for the creator. Which is great. And frustrating. At the same time. “

For this complex Hansel and Gretel production, Palmer, Balkwill and Kenderes started with drawings. “A pencil on paper encounters little resistance. It’s pretty possible to directly translate an image in your head to something on the page.”

The Old Trouts worked closely with the Vancouver Opera team to create a delightful cast of characters who include: 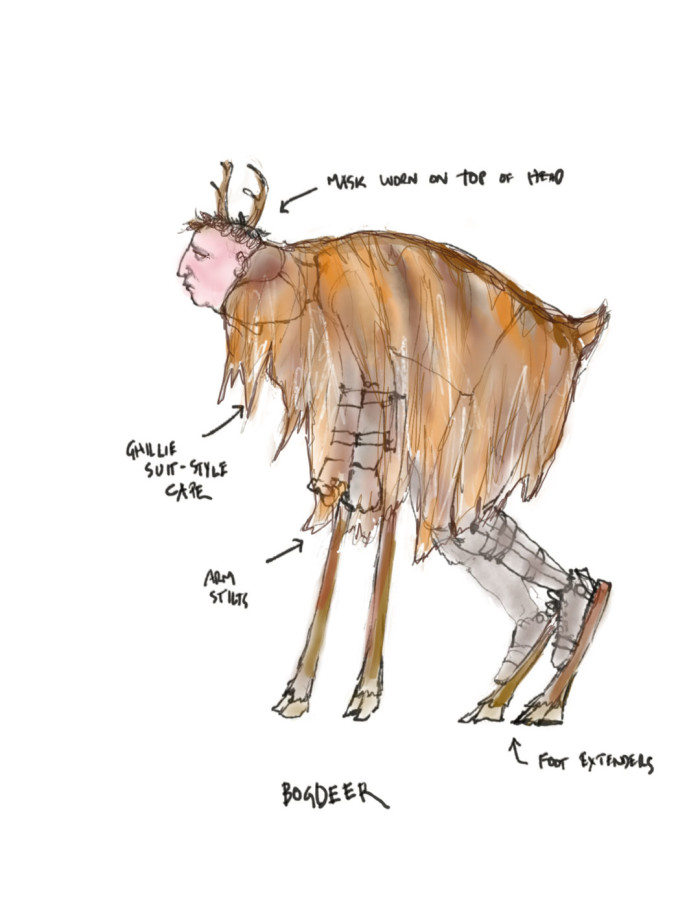 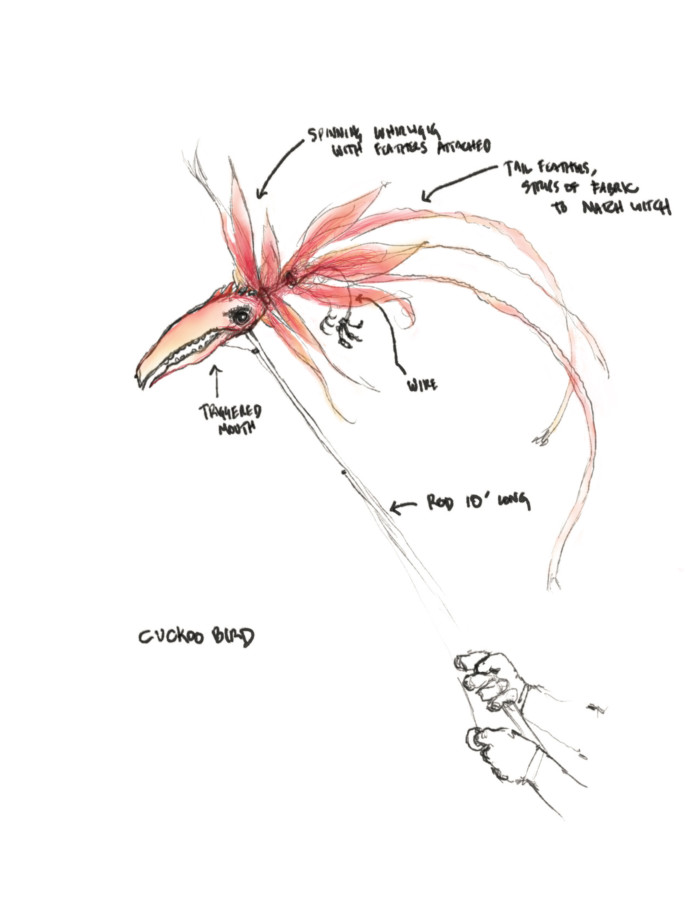 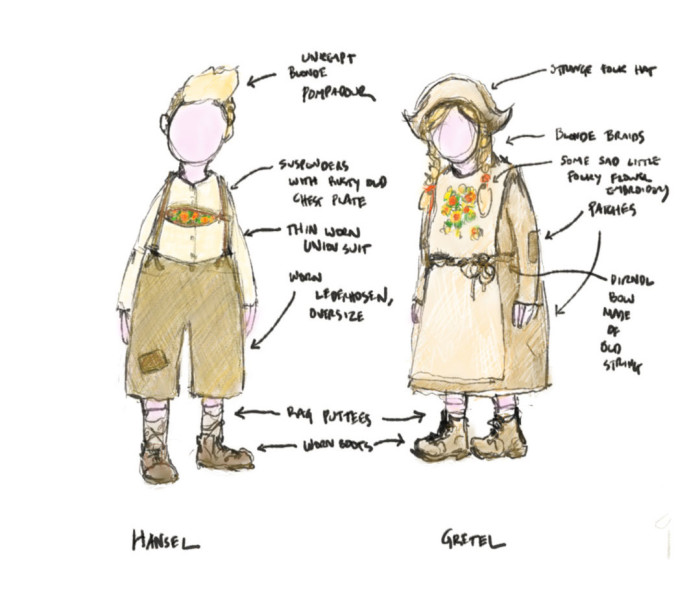 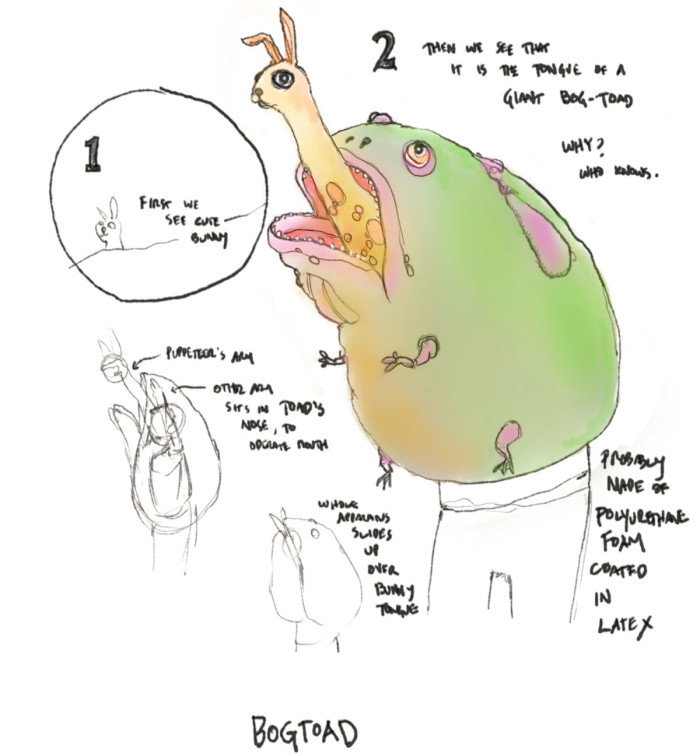 Working with the Vancouver Opera on Hansel and Gretel has been remarkably fulfilling for the Old Trouts. “The delights have been many,” says Palmer, ”and just being around this music is pretty overwhelmingly delightful.”

“The final scene when the children’s chorus has been freed from the witch’s spell – okay, so that happens – with all the little people singing their hearts out about how everything is going to be okay now, my God it makes you weep.”

Hansel and Gretel runs on various days and times between November 24th and December 11th.