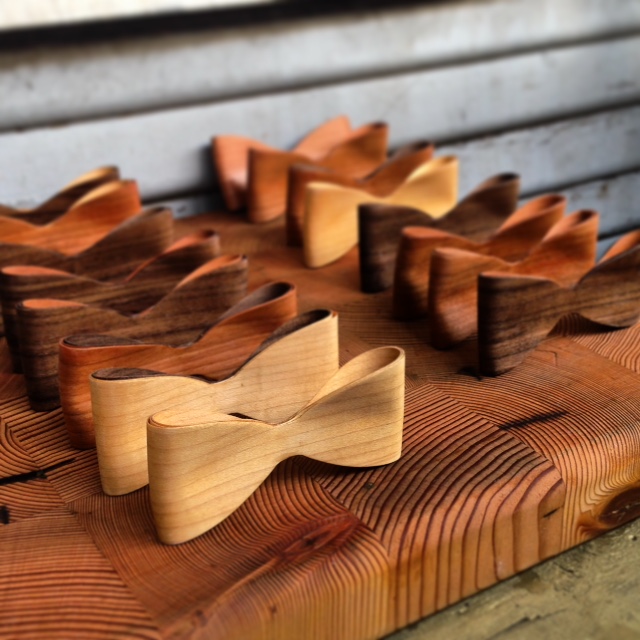 “I know what I want to wear, but I can’t find any in the stores.”

It is a feeling that many of us have had at one time or another. And it was this feeling that led Neal Colgan and Alanna Jakubauskas into creating their business: Kerf Accessories.

A year and a half ago, woodworker Neal and his partner Alanna were headed to a wedding. “Neal wanted to wear a bowtie,” says Alanna. “Something cool and unique. We were looking at shops, but just couldn’t find anything. He finally said: ‘I’ll just make one.”

“Of course,” sighs Alanna. “He can make everything and anything.” But a bowtie?

Neal got to work tinkering with prototypes. “I had experimented with necklace pendants before,” says Neal, “but nothing as intricate as a bow tie.” Some woods crack easily and Neal wanted the grain to look just right. And then there was the strapping. “Neal doesn’t sew at all,” says Alanna, “and I haven’t sewn since Home-Ec.”

They finally ended up with a walnut bowtie they liked and Neal wore it to the wedding.

“People could not stop touching and asking about it.” says Alanna. “From far away, you can’t tell it’s wood.” “It felt great and the response was immediate,” adds Neal. “We knew we were on to something good.”

Alanna and Neal went home and started plotting. Woods, oils, sprays, leathers. How could they create a line of distinctive wood accessories while minimizing waste and avoiding toxic sprays. “We wanted to be as local and ethical as possible.”

They would start with bowties. All of their products would be made by hand in their home studio and all of their finishes would be water-based.

Many people told them they were mad, especially those who hadn’t been there for the Great Wedding Reveal. Wooden bowties? Sure they were cool, but could one make a viable living off of such a niche product?

But, close friends and family were supportive and Alanna and Neal remained optimistic. “We went to the wedding in May of 2014 and by October we had set up our Etsy shop.” The name ‘Kerf’ was “the coolest sounding woodworking term we came up with! It is basically defined as the cut of wood by a saw.”

Word spread and soon people were coming to them with custom requests. The duo were thrilled when they landed their first store. “Our very first one was Bird on a Wire on Main. Kate there is great when it comes to local artists. She really gets it. They sent us pictures when our first display window was up. We were losing our minds to see how cool it was!”

Alanna and Neal particularly enjoy meeting customers face to face at markets. “Car Free Days – we did the West end and Main Street – was incredible. It was great to talk to people one on one and to get their feedback. We are in Portobello and Make it for this holiday season.”

On whom would they be most thrilled to see their bowties? “Jessie Ferguson. He and his partner have a bowtie company. That would be amazing,” says Alanna. “I also have my heart set on Bill Nye.”

What advice do the duo have for others looking to start artisanal businesses that are a little out of the ordinary?

1. Stay Positive
“It can be discouraging at times, but there is always that silver lining. Don’t be too discouraged about the moments where your product isn’t received the way you intended it to be.”

2. Be Resilient
“We have a lot of faith in our products. There are always going to be some people who get it and some people who don’t. But that’s ok. You just have to keep going.”

3. Have fun
“We could have these Monday to Friday cubicle jobs that we don’t like. We are very fortunate that we can be creative and do work that we love.”

Another bonus? Neal no longer has to comb through stores, looking for a suitable neckpiece. “When we have a formal event, I wear my darker favourites – usually the walnut – with a dress shirt and blazer. When we are going to a more casual and fun event, like a birthday party, I’ll usually wear a more bold tie to contrast the colour of any collared shirt.”