Love In The Rain 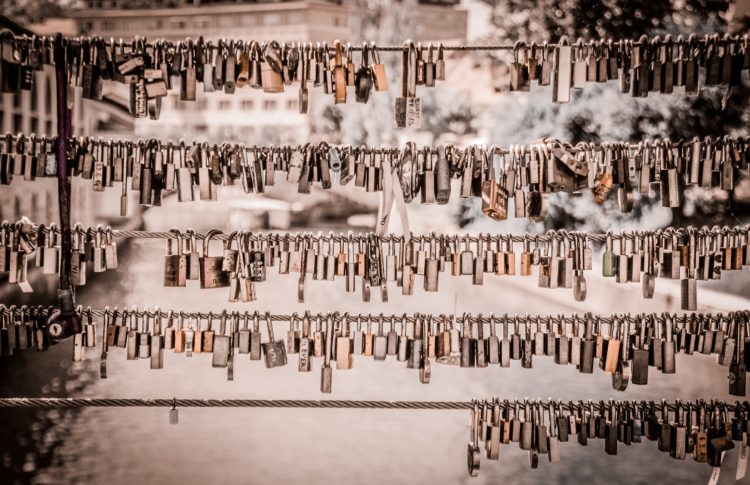 “The romantic gestures cause long-term heritage degradation and danger to visitors.”

What could inspire Health and Safety officials from Paris – City of Light and Love, no less – to say such a thing?

It was the engraved love locks that couples were latching onto the city’s Pont des Arts Bridge before hurling the keys into La Seine.  Near one million keyless locks, weighing 45 tons, were left to ‘bind couples together for eternity’. But some Parisians did not appreciate the look of the lock-encrusted rails and, more critically, the bridge was weakening under their weight.

Love locks have been clamped onto bridges across the world. The ‘Butcher’s Bridge in Ljublijana, Slovenia is pictured in our header. The lovestruck have also made their way to Salzburg’s Makartsteg Bridge, the Ponte Vecchio in Florence, the Brooklyn Bridge, the Ha’penny Bridge in Dublin, the Marienbrücke bridge near Neuschwanstein castle, and Serbia’s Bridge of Love in Vrnjačka Banja, where some think love-locking began. 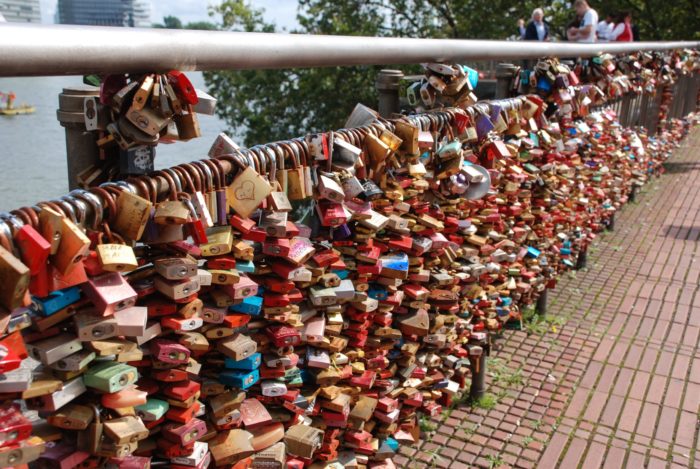 Over the years, people have attached a few locks here and there on Vancouver bridges, but most were removed. Finally, in September of 2016, an official Love Locks sculpture was installed in Queen Elizabeth Park. This ‘Love in the Rain’ was created by Vancouver artist, Bruce Voyce. There isn’t the rebel with a bridge element, but couples can be more confident that their locks will be there when they revisit.

Voyce – who studied art in Pietrasanta, Florence and here at Capilano University – has multiple public art works around the Lower Mainland, including ‘Tidal Train’ in Port Moody, ‘Floraforms’ in Surrey and ‘The Free Rider’ at Burnaby Mountain.

Queen Elizabeth Park, with its incredible city views and wedding photo backdroppery, was a fitting setting for a love locks sculpture. ‘Love in the Rain’ stands at 14 feel tall and is welded from 5,000 pieces of handcrafted stainless steel. Voyce’s Queen E. sculpture features four couples, each of whom can bear thousands of locks. Also on site is a drop-box, where couples can leave their keys. The metal from each of these keys is to be melted down to create future works of art. 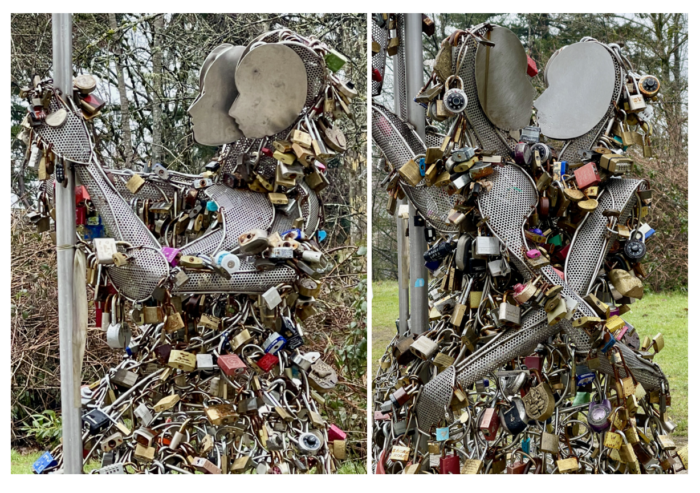 “I feel very fortunate,” ‘Love in the Rain’ creator Voyce said, “to be involved with a project that will be completed by the people and stories of love connected to the artwork.”

Love In The Rain