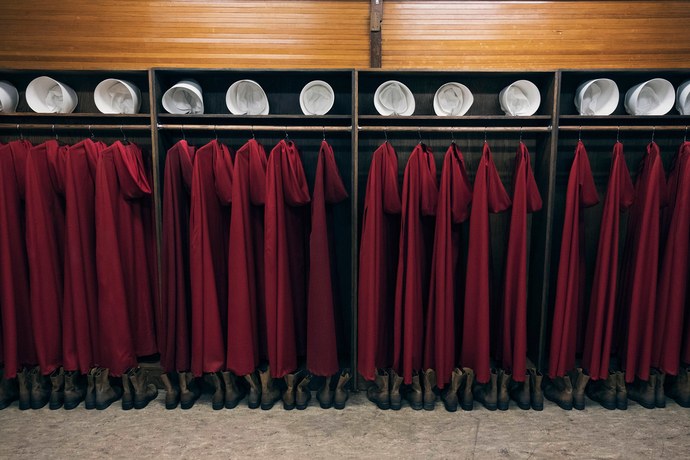 It may be 2017, but Margaret Atwood‘s 1985 The Handmaid’s Tale is 17 weeks at the top of The New York Times Best Sellers list and the source for Bruce Miller’s award winning Hulu series, starring Elisabeth Moss.

A few quotes from this chilling novel make it clear why Atwood’s work is so relevant today.

‘Ignoring isn’t the same as ignorance, you have to work at it.’

‘Truly amazing, what people can get used to, as long as there are a few compensations.’

‘But who can remember pain, once it’s over? All that remains of it is a shadow, not in the mind even, in the flesh. Pain marks you, but too deep to see. Out of sight, out of mind.’

It is any wonder that this prolific Canadian writer so inspired the sold-out crowds at the 2017 Vancouver Writers Festival?

From Cat’s Eye: ‘Love blurs your vision; but after it recedes, you can see more clearly than ever. It’s like the tide going out, revealing whatever’s been thrown away and sunk: broken bottles, old gloves, rusting pop cans, nibbled fishbodies, bones. This is the kind of thing you see if you sit in the darkness with open eyes, not knowing the future.’

Now, Atwood’s Alias Grace has found another life in a CBC/Netflix series produced by Sarah Polley and directed by Mary Harron. It’s a story inspired by the real case of 16 year old Grace Marks, an Irish servant working in Upper Canada who, along with stable hand James McDermott, was charged for the 1843 murder of Thomas Kinnear, their wealthy employer, and Nancy Montgomery, Kinnear’s personal housekeeper and mistress. McDermott was hanged; Grace Marks was sentenced to life in prison.

Jenny Erpenbeck was a Writers Fest revelation. She came out no-nonsense: blazer on, book in hand, straight to business, no extra inflections. But, when she started reading, we took a breath to admire the spare musicality of the language in her latest novel, Go, Went, Gone.

People were wiping their eyes as they listened to this East German-born author read about Richard, a widower who is questioning his own relevance as he retires from a life in academia.

‘Richard makes coffee.
•• Cup in hand, he goes out to the backyard to check for new molehills.
•• The lake lies placid before him, as it has all summer long.
•• Richard is waiting but he doesn’t know for what.’

Richard soon finds himself caught up in the lives of hunger-striking African refugees in Alexanderplatz. He considers his own life history as he gets to know men like Awad, Osarobo, Rashid, some of whom are doomed to be deported.

•••
‘I miss my places.
•• I only have myself to rely on.
••Only God can judge me.
Richard knows that the men who have smart phones use a free app to send each other texts, photos, and voice messages. They upload profile pictures and write so-called status updates about how they’re feeling. Some of them update their status daily, while others let it stand for weeks or months at a time.
••I miss my best friend Bassa.
••Don’t worry what other people think about you.
••Im at school.
A little while ago, Richard started copying down these messages. Sometimes, when one of the men falls in love with a young Berliner and she doesn’t want to marry him, he’ll write:
••I just want to be with you.
But sometimes there are messages like this:
••Remain true to yourself.
Or:
The mistake is in the selection.’
•••
Erpenbeck’s book The End of Days – also translated by Susan Bernofsky – won the Independent Foreign Fiction and Hans Fallada Prizes. 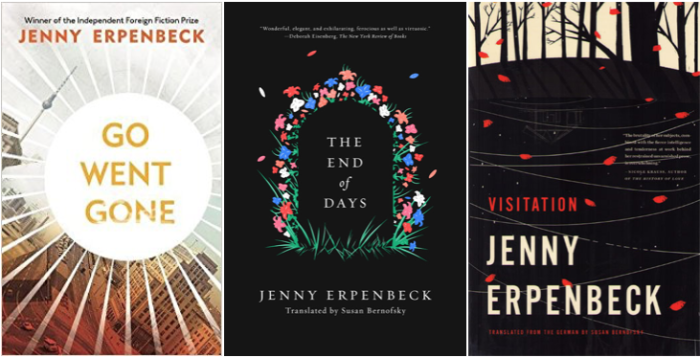 “She’s so young,” the person behind me whispered as Ruth Ware walked onstage. With the assertive step she has taken into the world of psychological crime thrillers – three books out in three years, NYT and Amazon bestseller lists, a Reese Witherspoon movie deal – it’s no wonder that people assume that the British Ware has been around longer than she has.

The film rights to all three of Ware’s books have been picked up by the Gotham Group. Oft compared to Agatha Christie, Ware told an NPR interviewer how much she admires classic crime books. ‘I read a huge amount of it as a kid, you know, Agatha Christie, Josephine Tey, Dorothy L. Sayers, Sherlock Holmes. And I didn’t consciously channel that when I was writing. But when I finished and reread the book (In a Dark, Dark Wood), I did suddenly realize how much this kind of structure owed to, particularly, Agatha Christie. It wasn’t consciously done, but I think the setting, you know, the way it’s a closed cast of characters — I would say I definitely owe a debt to Christie.’

Ware’s next book is set to be published in 2018. In introducing the Lying Game author to the Vancouver crowd, host and writer Caroline Adderson noted that Ware – who had previously worked as a bookseller, a waitress, a press officer, an english teacher – has shown ‘the work ethic of the odd job scramble.’ 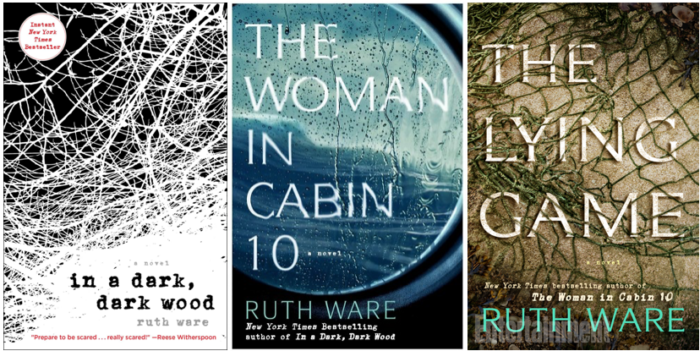 To set off her reading, Ware introduced us to Kate, Fatima, Thea and Isa – old school chums forced into each other’s lives again after human bones wash up on the north bank of the Reach at Salten.

••“You stay,” Kate says, and her voice has that quality that I remember so well—an absolute finality that was impossible to argue with. “You stay, because as far as everyone’s concerned, you came down for the dinner tomorrow night.”
••“What?” Thea frowns, and I remember for the first time that the others don’t know about this. “What dinner?”
•• “The alumnae dinner.”
•• “But we’re not invited,” Fatima says. “Surely they wouldn’t let us back? Not after what happened?”
•• Kate shrugs, and for an answer she goes to the corkboard beside the sink and pulls out a pin securing four stiff white invitations, returning with the cards in her hand.
••“Apparently they would,” she says, holding them out.

••In the space on each card is scrawled our names, handwritten in navy-blue fountain pen.

••Kate holds them, fanned like playing cards, as though inviting us to take one, make a bet.
•• But I am not looking at the names, or the embossed gilt lettering of the text itself. I am looking at the hole, stabbed through each card by the pin holding them to the corkboard. And I am thinking about how, however much we struggled to be free, this is how it always ends, the four of us, skewered together by the past.’

•••
The rain was relentless for this year’s Writers Festival, but the talent was inspiring.
•••
www.creatorsvancouver.com