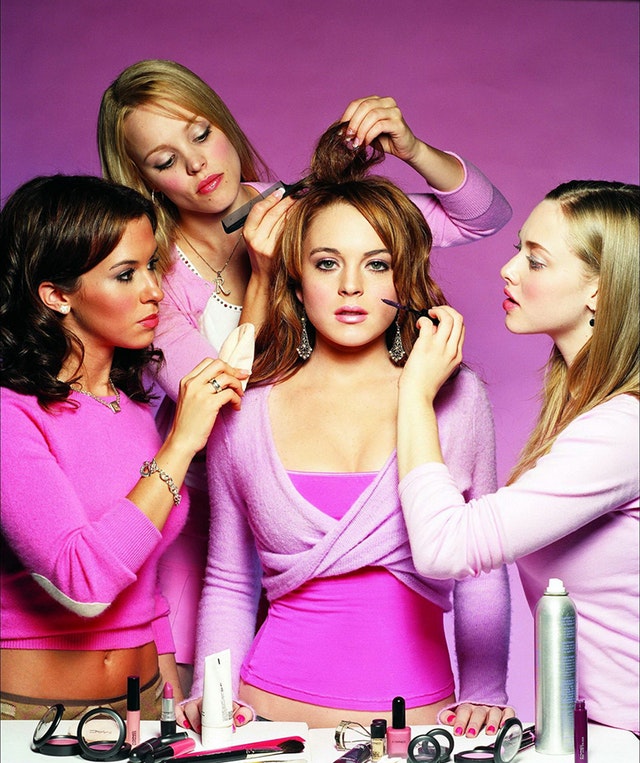 Though Mean Girls came out in 2004, you don’t have to wait long to find Cady Heron tangling with Regina George and the Plastics somewhere on TV. And now the Tina Fey-written screenplay has spawned a  2018 Mean Girls musical. When said musical didn’t win on any of its twelve Tony nominations, fans took to Twitter with tongue-in-cheek Gretchen Weiner tributes: ‘bye #tonyawards.’

Back in the early 2000’s, Fey was determined that her script do justice to its source inspiration: Rosalind Wiseman’s Queen Bees and Wannabes. She popped down to Fire Island beaches to interview teens about their school experiences and went through ten drafts over eighteen months.

Finally, it was time to leap – a lesson Fey had learned over her years working with Lorne Michaels at Saturday Day Night Live. As she wrote in her 2012 book Bossy Pants:

‘The show doesn’t go on because it’s ready; it goes on because it’s 11:30.  This is something Lorne has said often about Saturday Night Live, but I think it’s a great lesson about not being too precious about your writing. You have to try your hardest to be at the top of your game and improve every joke you can until the last possible second, and then you have to let it go. You can’t be that kid standing at the top of the waterslide, overthinking it. You have to go down the chute. (And I’m from a generation where a lot of people died on waterslides, so this was an important lesson for me to learn.) You have to let people see what you wrote. It will never be perfect, but perfect is overrated.’
~

The Stanley Park series – now in its tenth year – will also include Stand By Me, The Lion King, Spice World, Ferris Bueller’s Day Off, Grease and Titanic. All of the showings begin after sunset. Local artisans have also been selected to sell their wares in the Summer Cinema Marketplace.