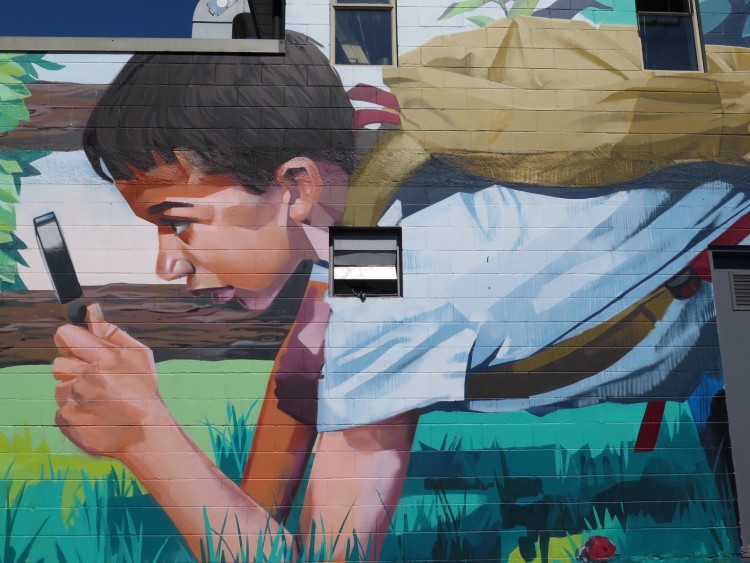 Who are the artists behind all of these new murals? Why and how did they paint what they did?

To learn more about the magic behind the murals, we signed up for a walking tour of the Vancouver Mural Festival. For a tour guide, we were lucky to get Pennylane Shen – curator, instructor and artist manager. Shen serves on the Art Collections Board of the VGH and UBC Hospital Foundations. She is also the Founder of Dazed and Confucius Consulting, where she works with emerging and established artists.

Not surprisingly, Shen knows many of the artists whose murals she will show us today. The Festival has also organized for two of the artists to meet us, give us some insight into their new murals and answer any questions that the group might have. 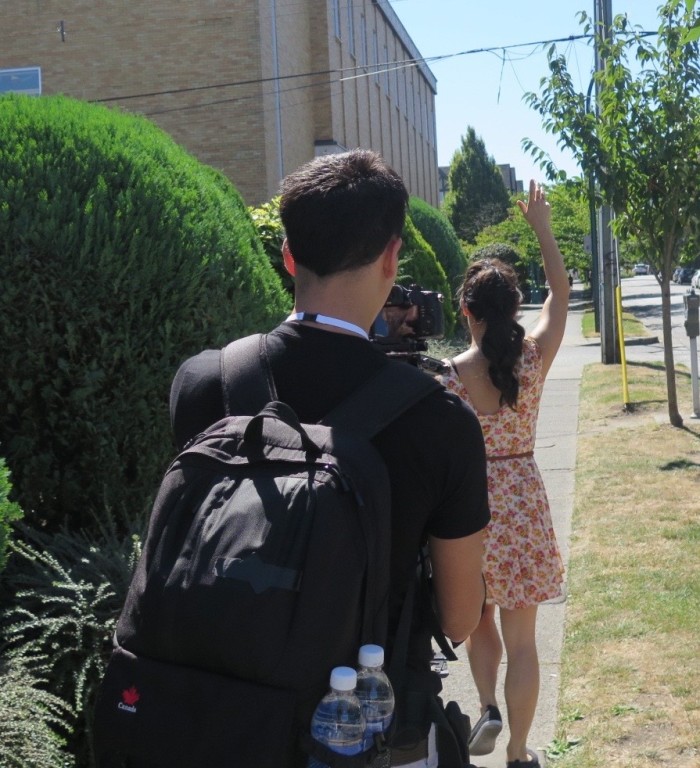 The first mural we visit is the work of artist Shallom Johnson, also known as Indigo. It is a work inspired by the recent shootings in the States, Pennylane tells us. It speaks to the “politics of race, gender inequality.” Both sides are unidentified, faceless. 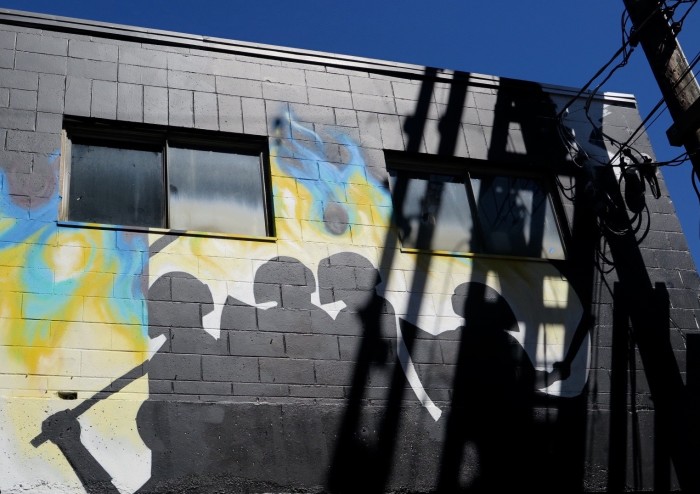 When Indigo arrives, someone from the group asks her if she got to choose the wall she would paint. “No!” she laughs. It was challenging – though ultimately gratifying – to wrap the artwork around such an angled wall. With this piece, Indigo says, she wanted to “start a conversation. It’s the first time I felt compelled to paint politically.” 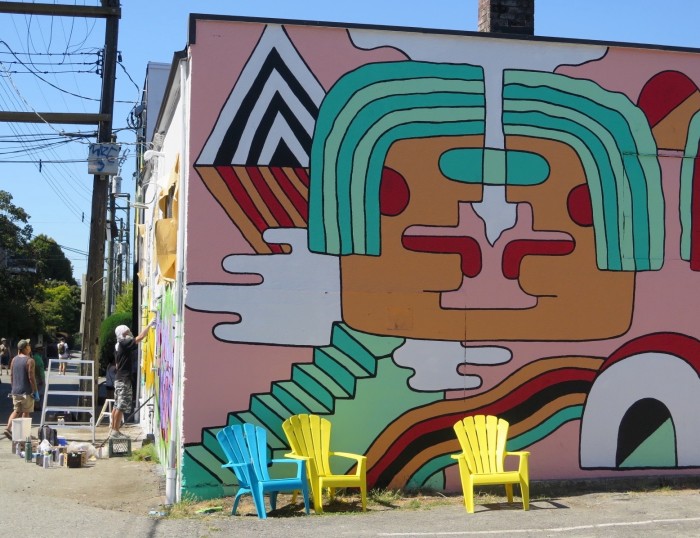 As we continue on to the next mural, we happen upon a Vancouver gallery owner and her family clutching a giant stream of balloons and posing for a picture in front of this Ali Bruce work. It is great to see the community out. Ali Bruce, Pennylane explains, is also a tattoo artist. This work evokes “weird dreams in the hot summer.” 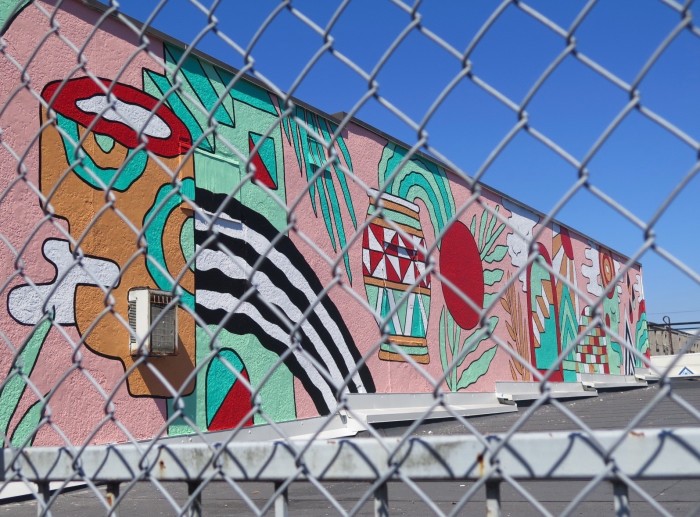 Bruce was one of many artists who had to go through special training in order to work on the precarious hoists necessary to get at awkwardly placed walls. 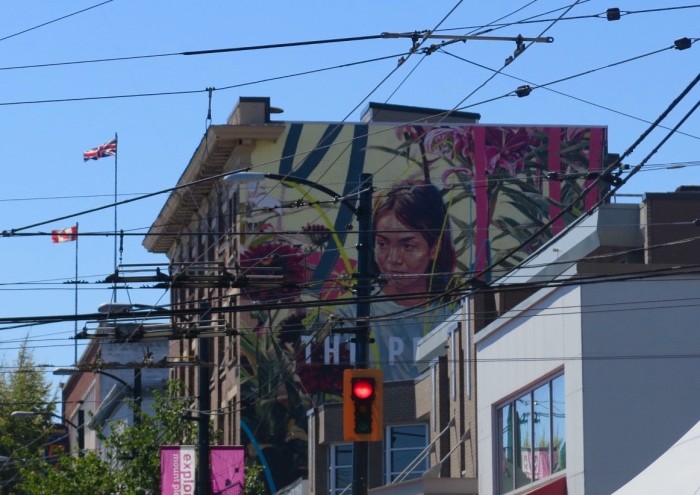 At our next stop, we meet Drew Young, who is the artist behind a striking mural and the Art Director for the Mural Festival as a whole. Young’s mural is on the heritage brick Belvedere Court building and paired with the mural of Jay Senetchko. ‘The Present,’ says Young’s mural, ‘Is A Gift,’ continues Senetchko’s.

Given the heritage pedigree of these walls, Young and Senetchko had to get serious city approval for their murals. Young’s wall features a woman named Paisley. “She was born and raised in Mount Pleasant,” Young tells us. Senetchko’s mural stars “Bob, the optometrist. He has been working in the community for six plus decades.” 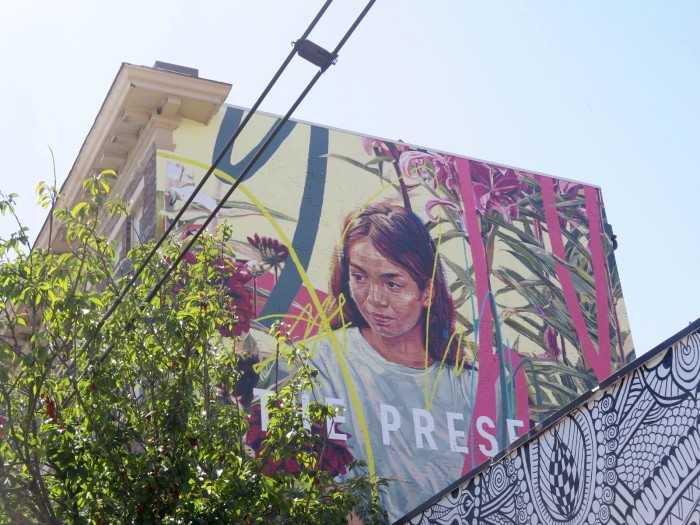 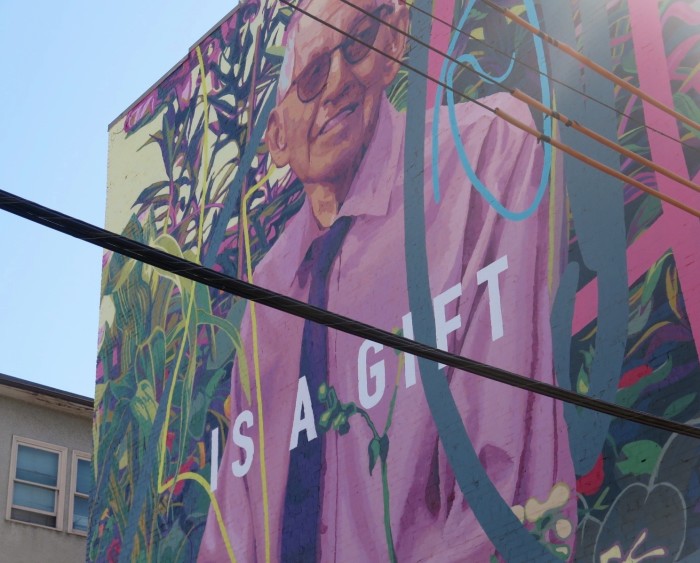 Paisley and Bob had their pre-mural photographs taken in Dude Chilling Park. Particularly challenging here, Young says, was painting on the brick. Given how busy he has been curating the Festival, Young finished his intricate mural in one week and a half. 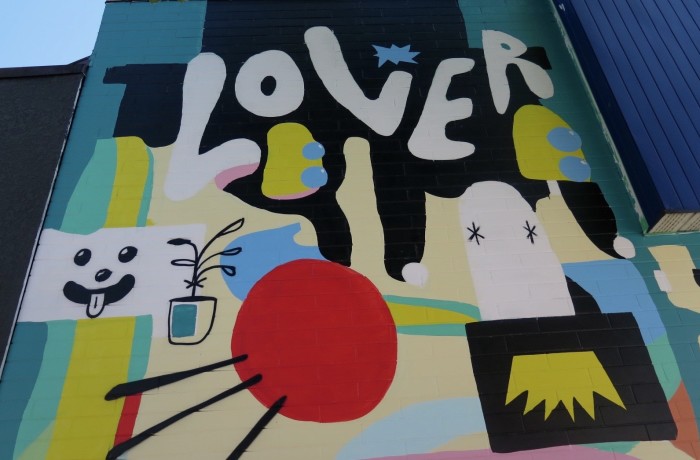 The next mural is by Justin Broadbent who hails from Toronto. Broadbent, like many of these artists, works across a range of mediums. Pennylane tells us that Broadbent likes to incorporate cats into his work. He admires their playful subversiveness and, we learn on his website, is partial to white cats. 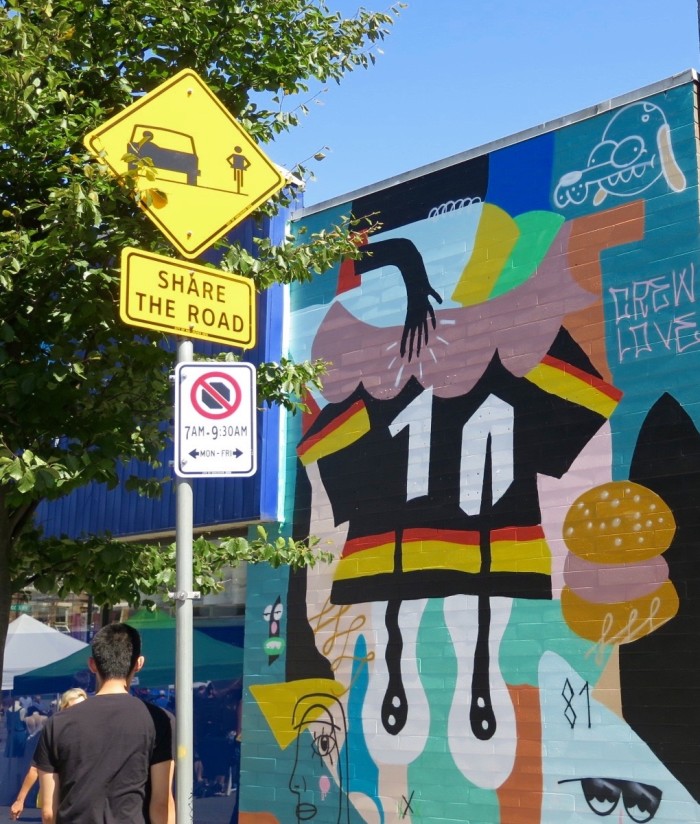 Broadbent had limited time and was able to paint his murals in a day and a half. 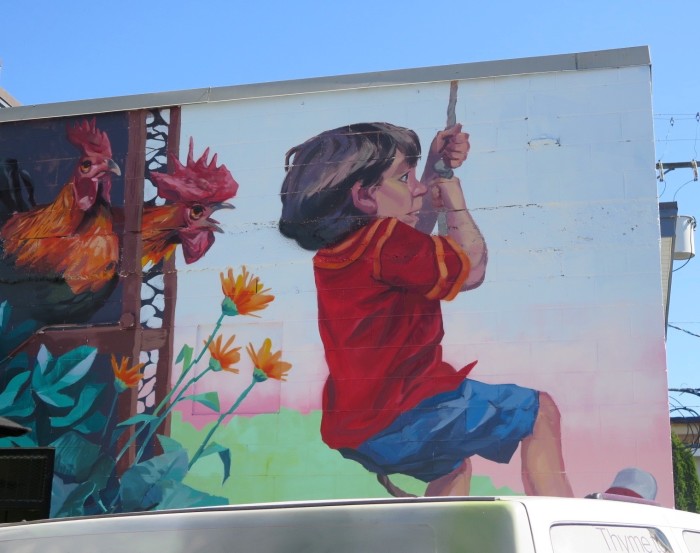 Ilya and James are both figurative artists, Pennylane tells the group. The two boys depicted here are sons of another mural artist in the Festival. The perspective in this mural is cattywampus: ladybugs are giant, tree trunks are easily conquered. This is “the world seen through the eyes of a child.” 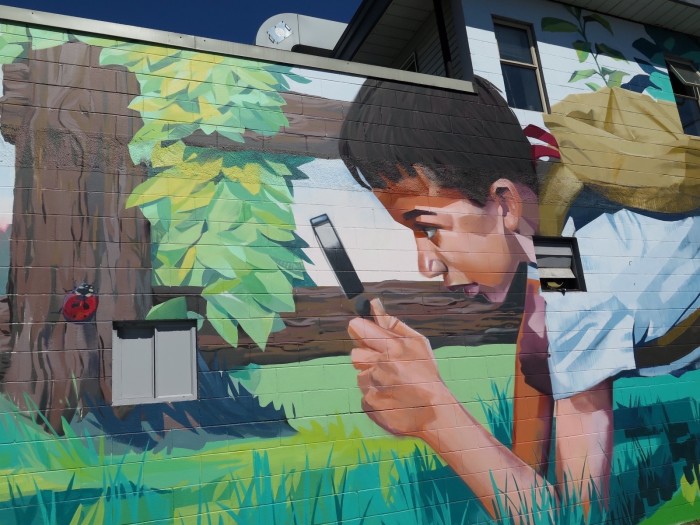 Ilya has a number of murals around the city. Here is a profile Creators Vancouver did on him a few months ago: 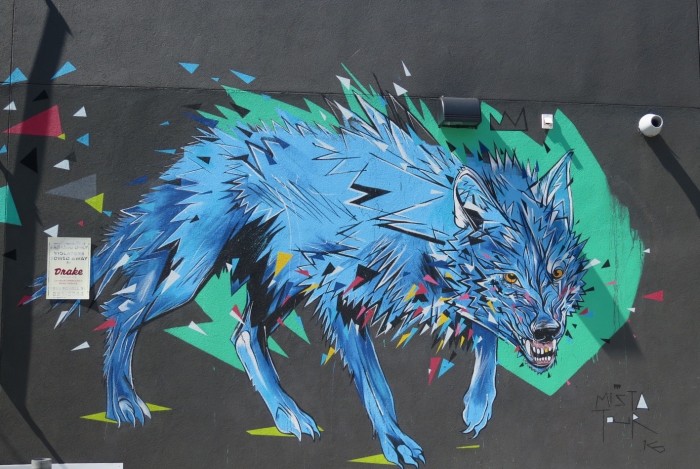 Tour, like many of the artists represented at the Festival, has a distinctive tag. His you’ll see at the bottom right hand side of the mural. 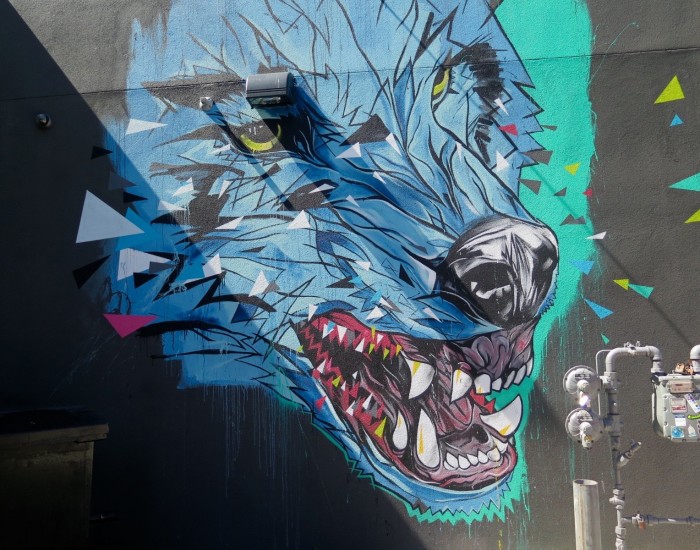 Ben Tour lives in Gibson and feels a particular affinity with wolves. As he said in an interview with Festival partner, the Burrard Arts Foundation: ‘I love their dynamism and strength of character. To me, they’re the quiet kings of the Pacific North West’s animal family. I want people to feel uplifted and energized by my mural and hopefully take some of the powerful Wolf spirit with them throughout their day.’ 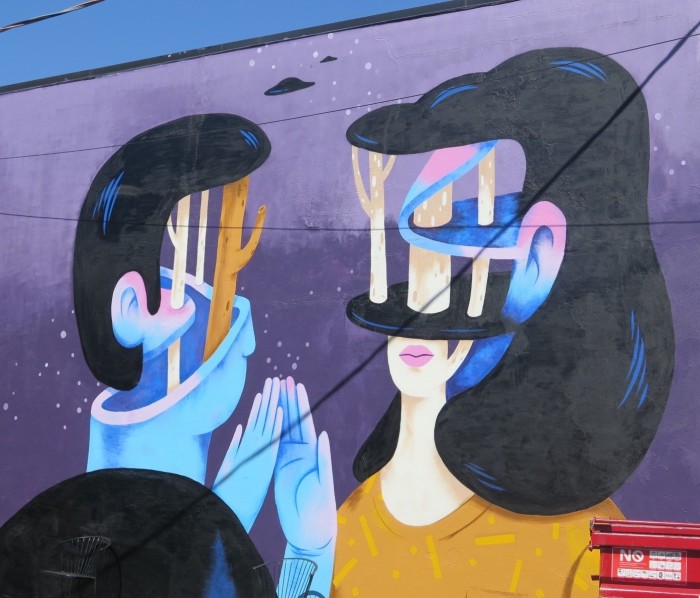 Pennylane has already taken us to see one more mural than scheduled, so she must get back for the next round. She does encourage us to head further south, up Main, to another “wonderful” mural, this one by Andrea Wan. 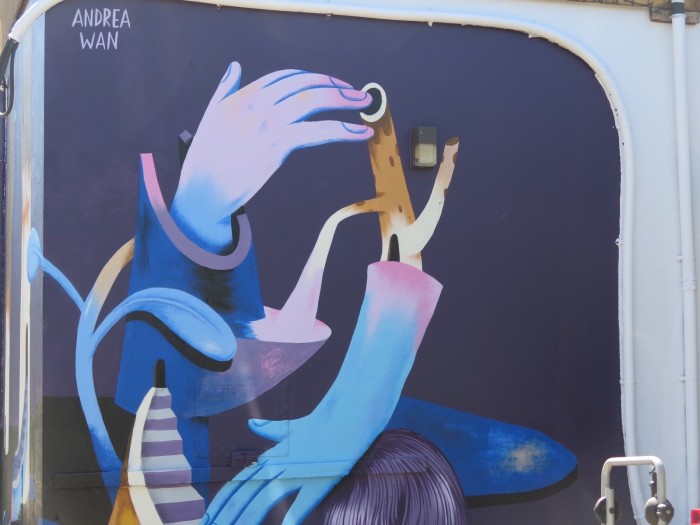 Wan was born in Hong Kong, raised in Vancouver and is now living in Berlin.

These are just some of the many artists represented in the Festival and now on our city walls. To check them all out see the Festival site for artist sites and a map of the murals.

Congratulations to all involved. We’ll look forward to Year Two.