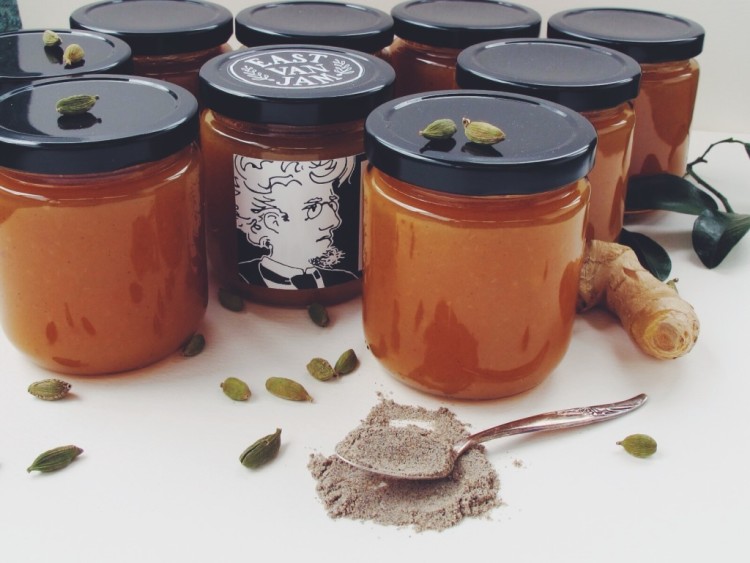 They are an interesting group. Madame Cherry is terribly grand, secretive and proud of her French heritage. Saint Claire was a devout Catholic nun – pure in her spirit, intense in her approach and a little tart. Blackberry Jack is adventurous, swarthy and ready for any dares you throw his way. Keep your eye on that Baron von Blueberry. He doesn’t like to talk about his low-rank nobiliary title or his past. The Baron would rather live alone in the mountains and tend the fire.

These vivid characters come to Ferrari-Morton as she is creating new flavours for her East Van Jam business. “Most of my flavours and labels are inspired by fictional characters. I look to the character of the fruit to see what kind of person would go well with it.”

So, the rich and tragically intriguing Madame Cherry is a fitting representative for East Van Jam’s cherry offering. “Jam made with cherry is pretty unusual,” explains Ferrari-Morton. “It’s a lot of labour, a lot of pitting. I took that rich, French flavour and paired it with sparkling rose and vanilla – two other French influences. Madame Cherry grew out of that.”

St. Claire was one of Ferrari-Morton’s first East Van Jam flavours. When she and her family went seeking a place in Vancouver, they were swayed by a house with fruit trees in the backyard. “We discovered that the plum trees in our backyard aren’t the standard Italian prune plum. They are a yellowish orange St. Claire plum.” This plum has a complex and intense flavour. It lends itself to a pure jam, says Ferrari-Morton. “It doesn’t need anything with it, so that led us to Saint Claire – a Catholic nun holding the East Van cross.” 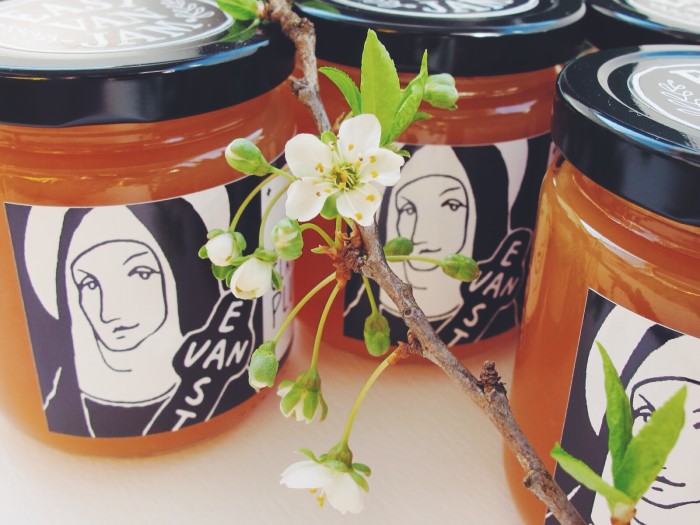 Wild Blackberry Jack jam is made from wild blackberries that Ferrari-Morton forages from just outside of Vancouver proper. “I pair that with lime juice and orange blossom water. It has a bold flavour and Wild Blackberry Jack is a dynamic, adventurous man.”

The taciturn Baron von Blueberry can enjoy his holiday spicing as he sits alone by the fire. “Cinnamon, nutmeg, allspice – Christmas spices.” Baron von Blueberry, we learn on the East Van Jam website, is: ‘always a little bit sentimental about his childhood, he enjoys the comforts of a sturdy blend of aromatic spices while gazing into a warm and crackling fire.’

East Van Jam is clear with its characters and in its tagline: ‘More love, less sugar.’ “I make small batch artisan jam,” says Ferrari-Morton. “What’s different about it is that it’s very low in sugar. It’s one quarter of the sugar of conventional jam. That’s what sets it apart in the jam industry.” With this low sugar content, Ferrari-Morton can create jams that are sweet or savory. As it is so fresh, it’s best to eat it within two weeks. Not a problem.

Ninety five percent of the fruit that Ferrari-Morton uses comes from BC, much of it from East Vancouver yards. “I’m very inspired by where I live and the food that is growing there various times of the year.” East Van Jam is also made with fruit from the Okanagan. “I made a random connection with a cherry farmer in Oliver. They set aside a whole bunch of cherries and pitted and froze them for me. We also ended up coming home with a stray cat who had been living out on their farm for awhile. We call him Scammer.” 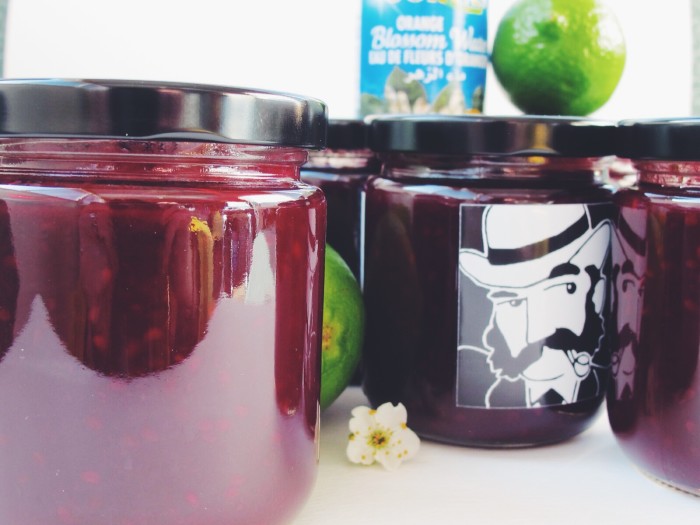 As a child, Ferrari-Morton used to watch her grandparents making jam. ”It was in a little town called Goodwood. I would be picking for my Grandma’s raspberry jam. She did a lot of freezer jam too.” Ferrari-Morton started making her own jam and preserving food in her early twenties.

“After I had my kids, I was talking to a friend of mine and we wanted to do something together. As were brainstorming, I kept going back to the same idea: teaching people the art of canning. It’s accessible and real. You can take the knowledge and apply it at home.”

She and her friend, Anna Hunter, started Homesteading Mamas. They taught canning classes for three years, many at the Kiwassa Neighbourhood House. Ferrari-Morton was particularly enthused when she got to teach people about making low-sugar jam and, eventually, her company was born.

Her first East Van Jam flavour creation was the Duchess of Strawberry: ‘The Duchess is a little bit lonely in her expansive estate.  Yearning for adventure, she imagines a bustling open market place where the scent of rose lifts spirits and wins the day.’

Ferrari-Morton asked Scott Bilstad – an artist and longtime family friend- if he could draw a portrait of the Duchess as described. He sketched the Duchess and continues to bring Ferrari-Morton’s East Van Jam muses to life. “A lot of the characters have a Victorian feel to them,” says Natalie. ” I’m a little bit obsessed with Victorian novels and classics. “

The pioneering Duchess of Strawberry got her first adventure at the Eastside Flea Market, and the public welcomed her warmly. “It was awesome. There was a really good reception to my product and my brand.” Much jam was sold and Ferrari-Morton returned home to research and experiment with more fiction and flavour. Raspberry Dandy, for instance, is a star in the making. She is cunning, warm and dogged in her pursuit of fame. Her rich raspberry charms are complimented by vanilla and, yes, the fame-enhancing star anise. 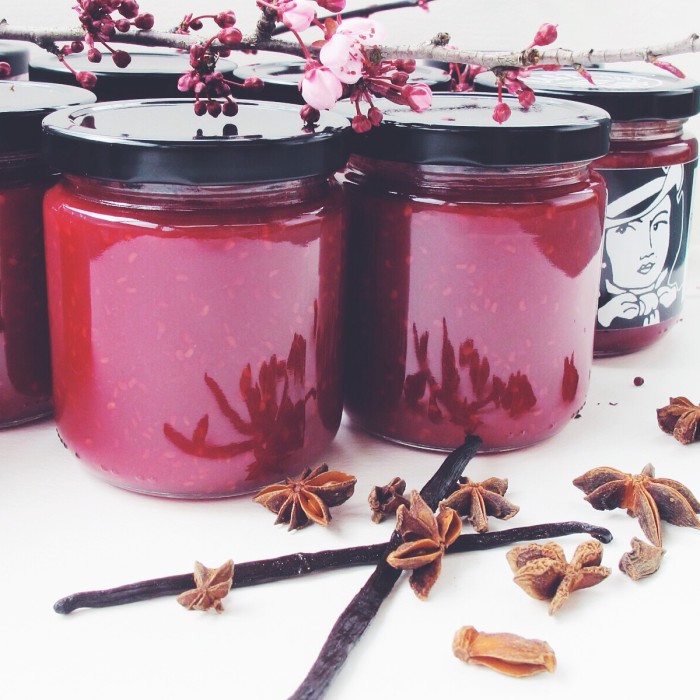 East Van Jam has grown and is now in about twelve retail spots. “Every jar is still capped by hand, by me. I’m trying to grow in a sustainable manner. ” Ferrari-Morton has enjoyed collaborating with other local businesses, such as Odd Society Spirits. “I’d use their vodka in my onion jam and they used the onion jam on their charcuterie plate. It’s a really proud affiliation.”

Ferrari-Morton has also collaborated recently with Claire Livia Lassam from Livia Sweets. “We did a macaron collaboration. She used my jam for the inside of the macaron. One that worked out nicely was my black current and juniper jam. I don’t have a character for that one yet. It’s a very sharp flavor.”

East Van Jam’s Head Proprietress will continue to dream up new characters and unique flavours. “I do a lot of test batches. It always begins with the fruit.”

“One of my favourites is time-consuming, so I don’t make it very much. It is Sir Pear of Islay with single malt scotch and lime. One time I was doing a demo at Vancouver Farmer’s Market and chatting with someone who was interested in what I was doing. He mentioned doing something with whisky. I started thinking about how much I like scotch and how it would go well with lime.”

Between the recipe-building and the character creation, Ferrari-Morton is ever inspired. “It’s a wonderful creative process. To go from a dream that I lose sleep and obsess over and to see it come to reality is the most exciting thing. To have others agree that it was wise to work towards this and to buy my jam, that makes it so worthwhile.”

The Bull On Georgia