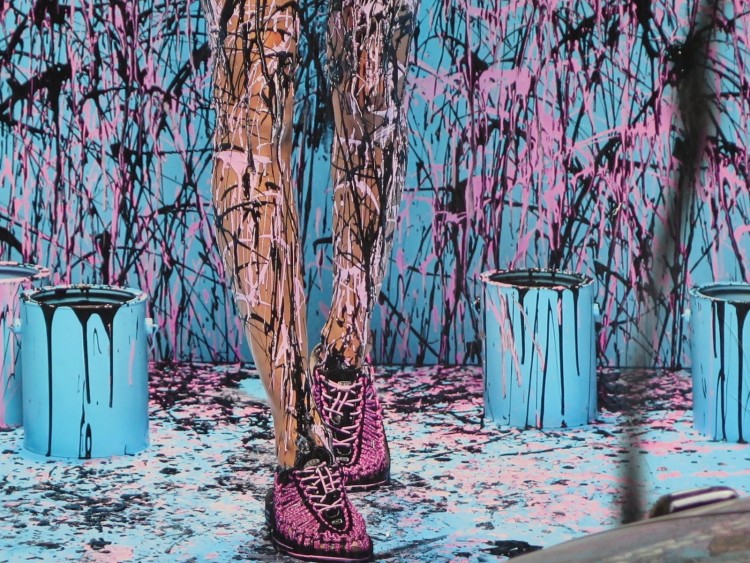 It is our last round of shows in New York, before we head back to a city that sometimes sleeps.

She Loves Me is known as a perfectly structured musical. The mysteries and intrigue of Act I resolve beautifully in Act II. With a book by Joe Masteroff, music by Jerry Bock and lyrics by Sheldon Harnick, She Loves Me opened in 1963. It was quickly lauded as an intimate show that focused more on richly developed characters than glitzy production numbers.

In Act I, we become invested in the charming employees of Maraczek’s Perfumerie whose lives overlap in unexpected ways. There is Amalia Balash, the love-lonely new perfume clerk played by the talented Laura Benanti, a Tony winner for her work in Gypsy. She is nominated again this year for Lead Actress in this show. Benanti is known to a broader TV audience as the Baroness who made everyone root for her in Sound of Music Live.

She Loves Me rounds out a phenomenal cast with: Jane Krakowski as the blousy Ilona, Zachary Levi as the lovestruck pen-pal and Gavin Creel – Bill from the Eloise movies – as the skeezy Kodaly. The show takes place courtesy of Roundabout Theatre, a non-profit theatre dedicated to excellence and a focus on classic plays and revivals that might not otherwise find a place on Broadway.

In evidence of this excellence, the Music Director for She Loves Me is Paul Gemignani, who has worked on Broadway and London’s West End for more than 40 years. He is particularly known for his work alongside composer Stephen Sondheim. In She Loves Me, the orchestra is beautifully positioned above our heads, on either side of the theatre. It is strings and Gemignani to the left, brass to the right.

The Phantom Of the Opera

The Phantom has been haunting Broadway so long, I must admit I wasn’t jumping up and down about going. More than 140 million people have watched the show worldwide; who hasn’t heard the songs? Given my ho-hum, shoulder-shrug approach, Phantom of the Opera was probably my biggest show surprise. There is a reason that it has been running over 25 years on Broadway and won so many awards.

In 1988, Phantom won 7 Tonys, including Best Musical. Most striking are the still incredible sets and costume designs, for which Maria Björnson won multiple awards. There is the deadly, descending chandelier, the movable gargoyles and the gorgeous red-hued ballroom staircase. Most jaw-dropping is the smoky river, beneath the bridge, that leads to the hidden lair of the Phantom. Watching the Phantom paddling Christine through the smoky water is just stunning. 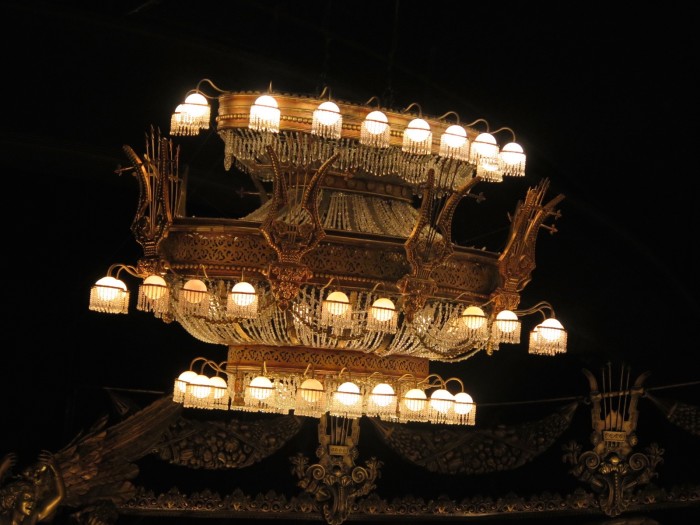 The operatic chops of the cast is noteworthy. Starring as the Phantom is James Barbour, whose resume on Broadway and TV is scroll-like. He is playing against a lovely Christine Daaé who, on the other end of the experience scale, is making her debut on Broadway.

It is fun watching the delight of audience members who are seeing their favourite musical live for the first time. I don’t know if Phantom is particularly big in Italy, or if our section was uniquely Italian, but there was much excited conversation about the production. Couples were policing each other when the urge to sing along became too great.

Robin Williams was a singular performer. The role of the Genie in Aladdin was written for him by writers Ron Clemens and John Musker. Williams was initially uninterested, but Clemens and Musker asked Head Animator Eric Goldberg to draw a genie over Williams’ comedic routine on split personality. When the Genie’s head split in two to argue with itself, Williams laughed hysterically and agreed to sign on as Disney’s Genie.

With the voice of Williams riffing so clearly in Aladdin-loving heads, casting Genie in Aladdin the Musical would be an onerous task. Thankfully, Disney found James Monroe Iglehart – 6 feet tall, 295 pounds, incredibly talented and hilarious.

When Iglehart starts the show with his commanding baritone, expert moves and powerful charisma, we know that this lamp delivers. It is no wonder that Iglehart won the Tony in 2014 for this role. Through the show, the fast-talking Iglehart takes on personas from a sassy teen girl who is over it to the great all-knowing magician. It is his own take on the Genie with a respectful nod to the brilliance of Williams. Iglehart’s Friend Like Me sequence is 7 minutes, 36 seconds of the most high energy character changes, wild Disney setting magic and sparkling ensemble costumes. Phew!

Also impressive is the clear- voiced Adam Jacobs as Aladdin. Jacobs sounds exactly as he does on the cast album, as does Jonathan Freeman who plays the dripping evil Jafar, both here and in the original film.

Chad Beguelin is responsible for the book for Aladdin and collaborated with the power team of Howard Ashman, Alan Menken and Tim Rice for the  melodies and lyrics.

Defying Gravity. It is the Big Vocal Pyrotechnics Song, be it in TV talent shows, school auditions or a brave night at karaoke. Imagine the pressure on Broadway Elphaba as she grabs her broom and builds into the song. Something has changed within me. Something is not the same. People know the big notes are coming. Will she be amazing? Will we be wowed?

In all the times we have seen Wicked on Broadway – yes, all the times. A family tradition. Total ticket price best not calculated – the Elphabas have delivered. The set is impressive, Elphaba is on her broom and defying gravity, Glinda is begging her to apologize to the Wizard and the singing is powerful. This Elphaba – Rachel Tucker – was no exception.

For those who don’t know, Wicked is based on the novel by Gregory Maguire, with a book by Winnie Holzman and lyrics and music by Stephen Schwartz. It is the story behind the story of the Wizard of Oz. We learn how Glinda the ostensibly Good Witch became ‘good,’ how Elphaba the ostensibly Wicked Witch became ‘wicked,’ and how Dorothy, the Lion, Scarecrow and Tin Man came to find themselves on the Yellow Brick Road. We also uncover the truth behind the man who calls himself The Wizard of Oz, here played by Peter Scolari –  Broadway and TV star known for his work on Newhart, Gotham, Girls and as Tom Hanks BFF on Bosom Buddies.

In the first week of May, Wicked surpassed $4 billion worldwide. Audiences are excited by the many layers of story centered on Elphaba and Glinda, here played by a funny Carrie St. Louis. This Glinda is a little more ballsy and a little less bubbly than the ones we have seen in the past. The production value is high – flying monkeys, booming, mechanical dragons, a green-mad Emerald City and elaborately theatrical costumes. 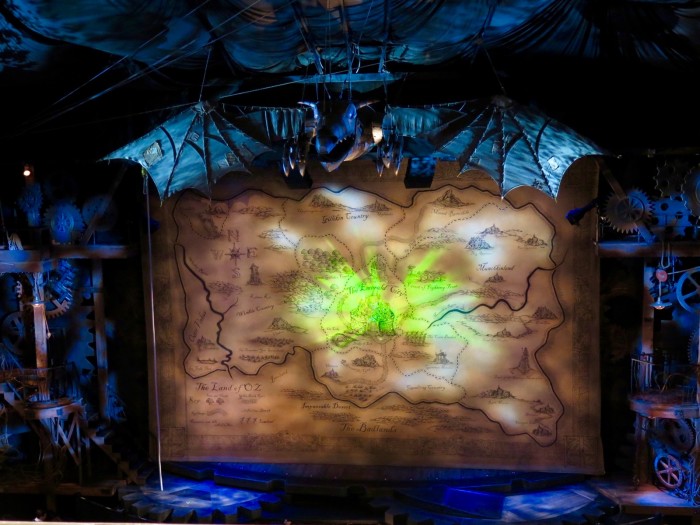 I’ve always wondered what would happen if someone had a medical emergency in a Broadway show. Today, unfortunately, we found out. As Fiero was running off with the lion cub, we heard a growing crescendo of chatter that sounded like it was coming from backstage. “Is there a doctor in the house?!”

It seemed to be some strange new staging related to Fiero’s lion scratch, until the lights came up a bit and Elphaba peered forward and asked: “Is there a doctor in the house?” A small crowd was leaping up around a man mid-Orchestra section as a doctor made his way in. Thankfully, the man was able to walk out with help. I hope he is ok.

“The show will recommence in one minute.” It did and Elphaba/Rachel Tucker started into her song once again. There is no hesitancy around a standing ovation at the end of Wicked. It is a marvelous spectacle and many will come again (and again.)