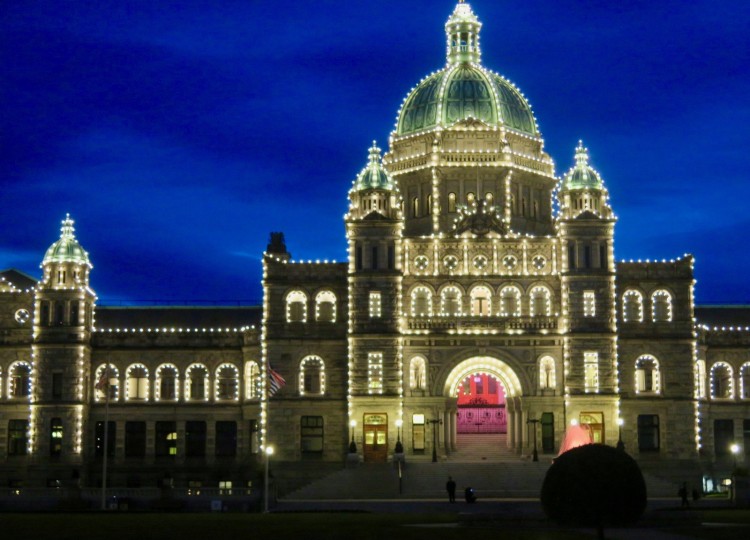 Victoria has been named #7 in Condé Naste’s 40 Best Cities in the World, right after Vancouver at #6. ‘As a former British colony,’ the editors write, ‘Victoria retains stately mansions and picturesque gardens perfect for walking and gazing.’

Come by ferry or seaplane and head to The Inner Harbour –  a wonderfully beautiful place to wander around and admire public art.

After some on-the-water whale watching, you can visit Victoria’s Orcas in the City. Meet VictoriOrca by Peter Karas & Corinne Garlick. 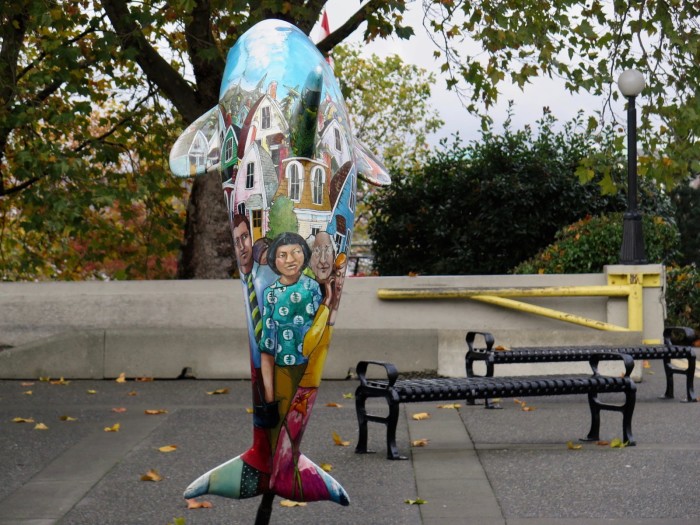 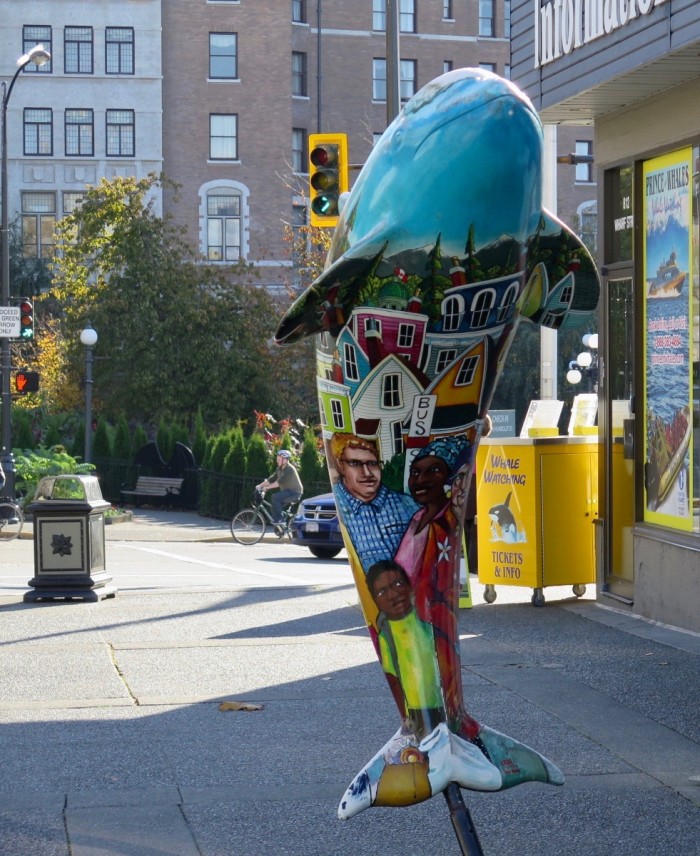 And here is Maximilian by Sara Gifford, Jane Van Sickle and Michael Hofmann. 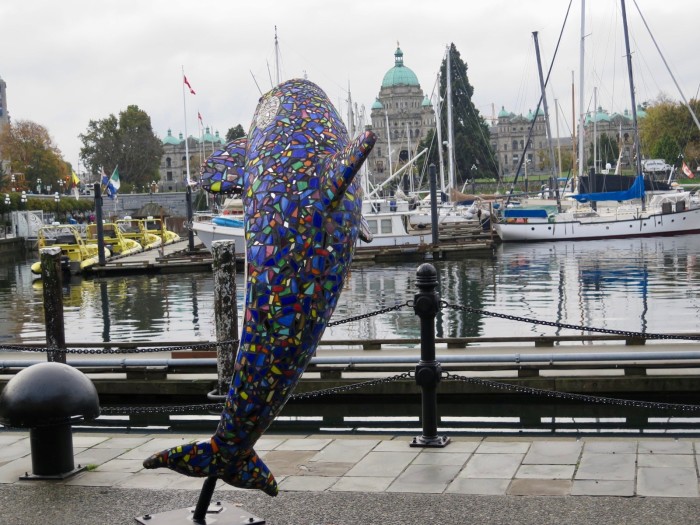 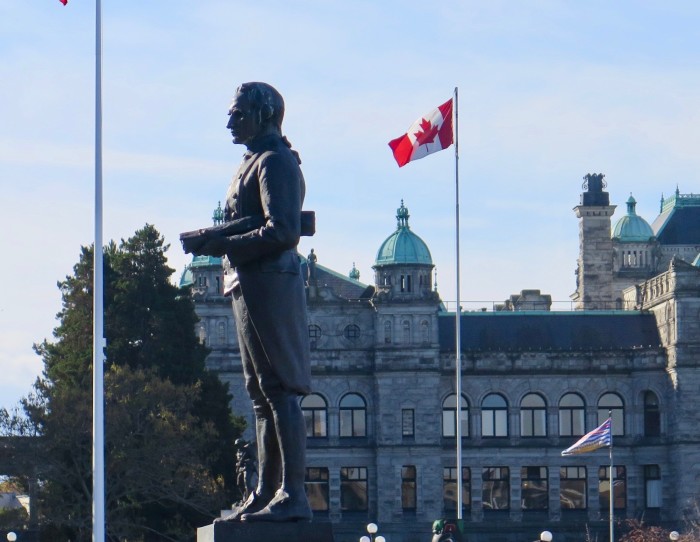 Queen Victoria, after whom the city was named, had her statue finished in 1914 by British sculptor, Allen Bruce-Joy. 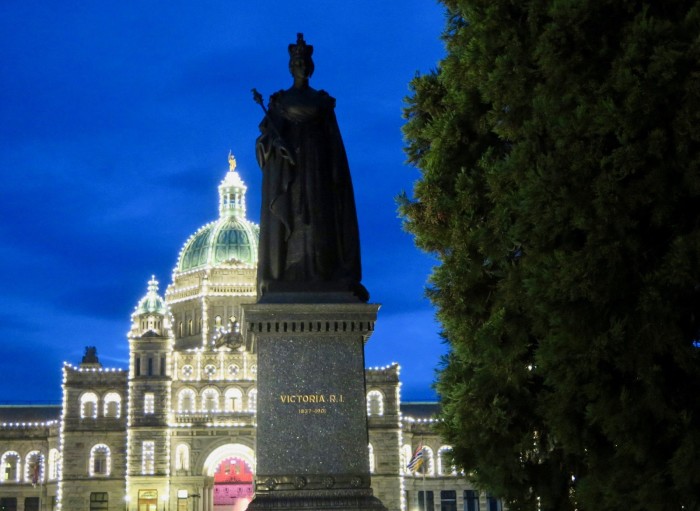 The Cenotaph is a bronze War Memorial dedicated to the Unknown Soldier. It was presented in 1924 and designed by English sculptors Sidney and Vernon March. 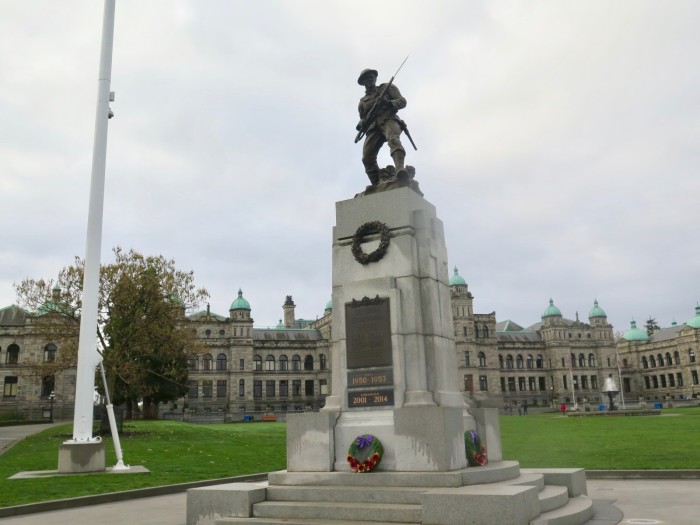 The Homecoming was created by sculptor Nathan Scott for the 100th Anniversary of the Canadian Navy. 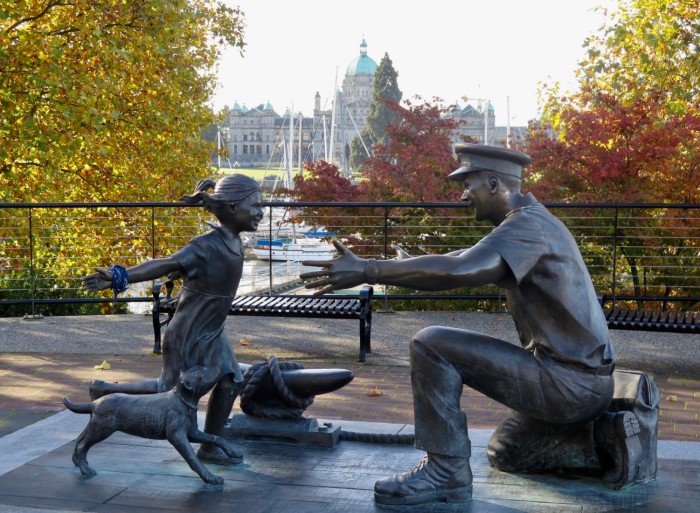 Victoria is also home to a beautiful collection of First Nations art. The Knowledge Totem was created by Master Carver Cicero August with his sons Darrel and Doug of The Cowichan Tribes. The totem marked Victoria’s hosting of the XV Commonwealth Games in August of 1994. 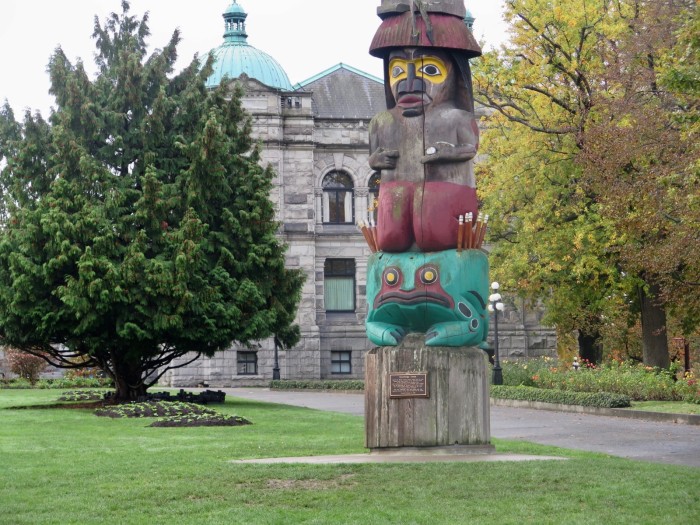 Kwakiutl Bear Pole has been gracing the harbour since 1966. The pole was carved by Henry Hunt and restored by his son Tony Hunt, a hereditary Kwakwaka’wakw chief. 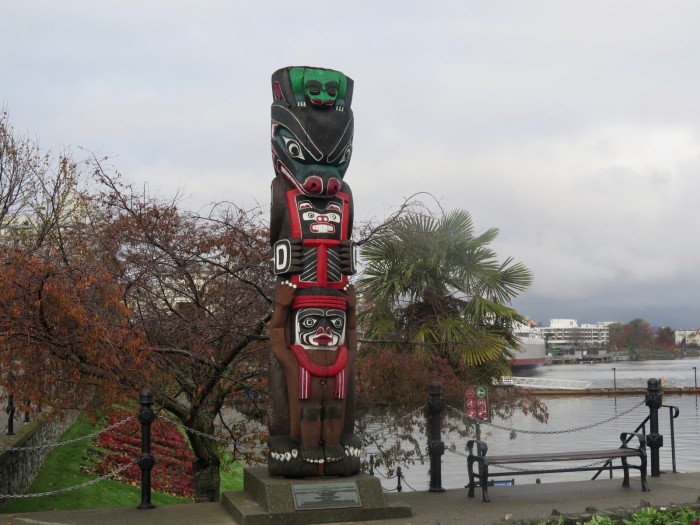 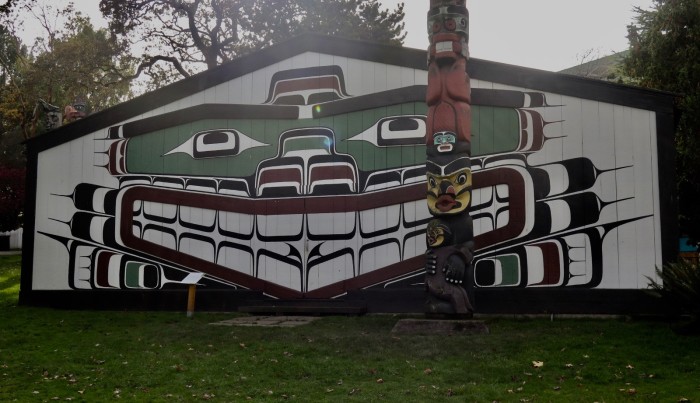 The Hunts were busy in Thunderbird Park as well. This Kwakwaka’wakw Totem Pole was carved in 1979 by Richard Hunt, the first he created independently of his father and mentor, Henry. 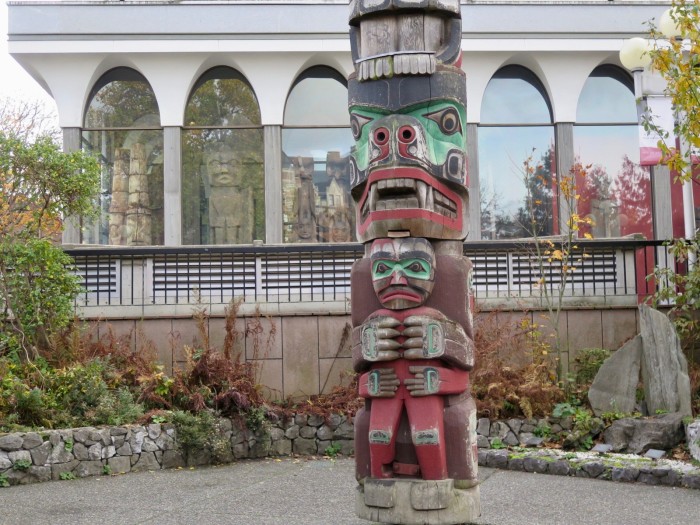 Grounding all of this open-air art are wonderful, historic buildings. The Canadian Pacific Railway Steamship Terminal Building is the work of architects P.L. James and Francis M. Rattenbury. It is meant to be a wink at the temple of Poseidon, God of the Sea. 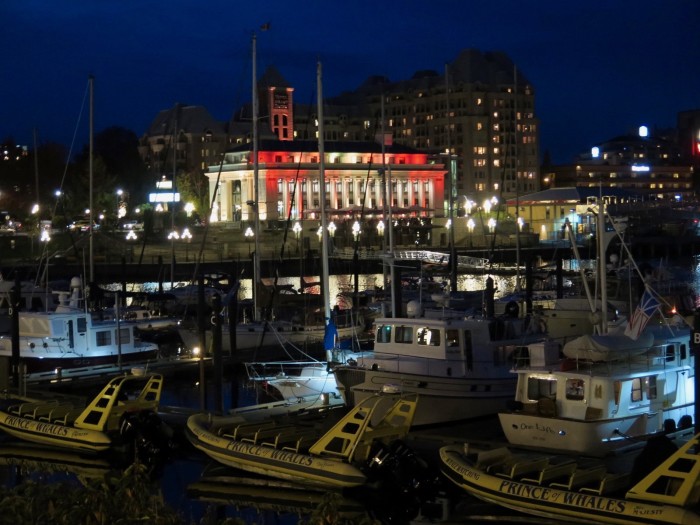 The world-famous Empress was designed as a Canadian Pacific Hotel by Francis Rattenbury. 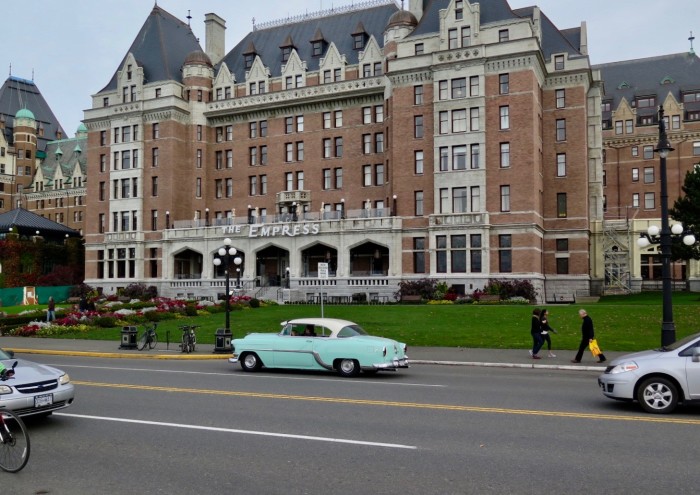 Sitting most obviously in the midst of it all are the Parliament Buildings, finished in 1898 under, yes, lead architect Francis Rattenbury. In constructing the BC Parliament buildings, Rattenbury and his team aimed to use as many local workers and materials as possible. 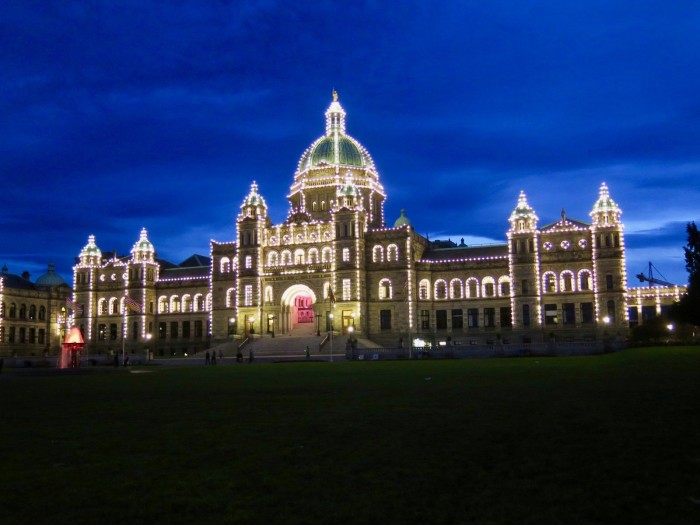