It’s not all about Flashy Cousin Apple. The low key Pear has also had its time at the top of the fruit stand.

A prescription dated back to 2750 BC had but three ingredients: pears, thyme and figs. The doctor was to mash the pears, figs and thyme together until smooth. Next step? ‘Pour ale over it, rub with oil and fasten as a poultice.’

Said Pliny the Elder (He lived from 23 to 79 AD. Don’t try this in 2017): ‘The wild pear ripens but very slowly. Cut in slices and hung in the air to dry, it arrests looseness of the bowels, an effect which is equally produced by a decoction of it taken in drink; in which case the leaves are also boiled together with the fruit. The ashes of pear-tree wood are even more efficacious as an antidote to the poison of fungi.’

In the 1597 Herball, Gerard wrote: ‘The harsh and austere pears may with good success be laid upon hot swellings in the beginning, as may be the leaves or the tree, which do both bind and cool. Wine made of the juice of pears called in English Perry, is soluble, purgeth those that are not accustomed to drinke thereof; notwithstanding it is as wholesome a drink being taken in small quantity as wine; it comforteth and warmeth the stomach, and causeth good digestion.’

Across many cultures, the curvaceous pear was considered an aphrodisiac. Italian poet Tommaso Campanella (1568-1639) wrote a sonnet ‘on the occasion of a gift of pears sent to the author by his lady, which were nibbled by her teeth…a cherished gift between lovers.’ 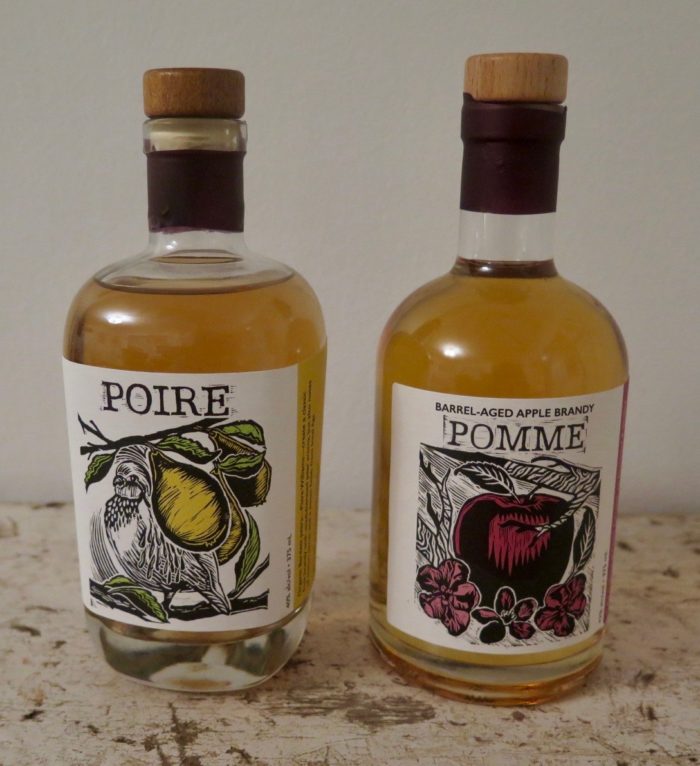 In 21st Century British Columbia, Master Distiller Ken Winchester – who apprenticed at Bruichladdich Distillery in Scotland – has used the mighty pear to create Poire, a pear brandy, for the de Vine Vineyards in Saanichton. Winchester made his concoction from Organic Barlett Pears with notes of melon, citrus and – harkening back to our 2750 BC prescription – figs. His powerful potion is aged in whisky casks.

“What I love about distilling spirits,” Winchester told Boulevard Magazine, “is the creativity – the ability to experiment. There are no recipes. Every batch is a new experience. It’s an art, not science.”

Here’s Winchester talking about his work at de Vine, where they also tap their maple trees for whisky sap and gather honey for their rum-style Honey Shine.

And yes, Flashy Apple, we all see you there. Winchester does make a Pomme brandy, but note the inclusion of pears. ‘In the tradition of a fine French Calvados, we fermented & distilled organic BC apples and pears, then aged the spirit in once-used whiskey casks. Rich, lingering flavours of baked apple, bourbon, and spice. A limited first release.’

Poire, Pomme and the other de Vine potions come in gorgeously simple bottles with striking labels created by artist Margaret Hanson. ‘The loveliest winter spirit label that I designed, illustrated and carved the linoblock for this summer,’ she wrote of her Poire design. ’A partridge in a pear tree! How perfect.’

Take a look at the de Vine Instagram to see other Winchester creations and how bartenders are incorporating them into their fancy drinks.