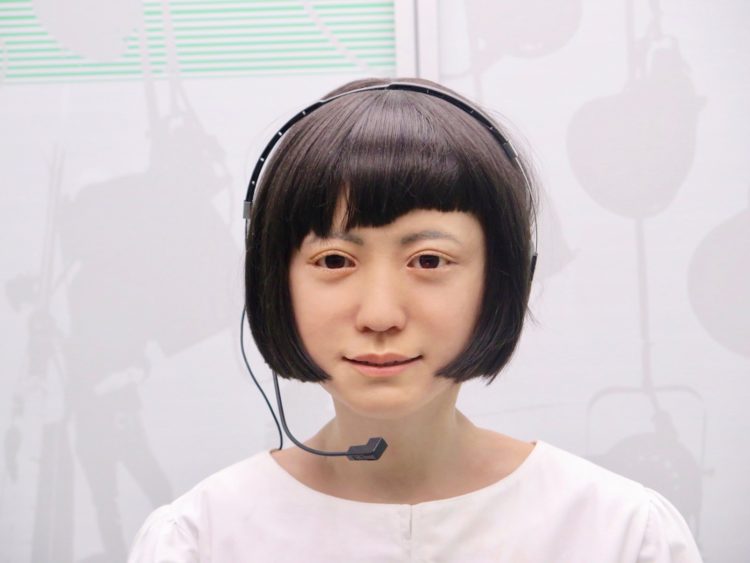 How do you feel about a world with more robots? If you were lonely or sick, would you be ok – or even excited? – if your main caretaker was a humanoid?

Some of the world’s great creators are devoting their talents to robotics. At UBC, you’ll find undergrads building and racing robots in the Phys Eng Lab.  Vancouver has internationally renowned robotics research firms, robot-building meetups and a robotics club for kids at Science World. The International Conference on Intelligent Robots and Systems takes place in Vancouver on September 24th to 28th.

This summer, London’s Science Museum has brought together a fascinating exhibit of  robots dating back to the 15th Century.

‘Robots tells the story of 500 years of mechanical humans,’ we’re told. ‘Set in five different times and places, it traces our human obsession with re-creating ourselves as machines. Seeing robots through the eyes of those who commissioned them, made them or gazed at them open-mouthed reveals much about ourselves, and what we think is important.’

The five different times captured by the exhibit are:

We learn about the connection between religious faith and robots in the 16th century. If the movement of the heavens could be tracked with clockwork, did the human body work with a similarly mechanical precision? This notion, combined with an increasing understanding of human anatomy, led to the creation of clever, early robots.

The Automaton Monk below was created in Spain or Southern Germany in ~ 1560. King Philip II of Spain commissioned it as an offering of thanks after his son recovered from a traumatic head injury. This remarkable Monk could pray, raise the rosary and crucifix, pound his breast and move his lips whilst walking from one edge of the table to another.

The body was a marvelous machine – so said anatomists working from 1500-1700. This wax anatomical model of a woman with removable organs was made by Clementine Susini between 1770 and 1800 in Florence, Italy. 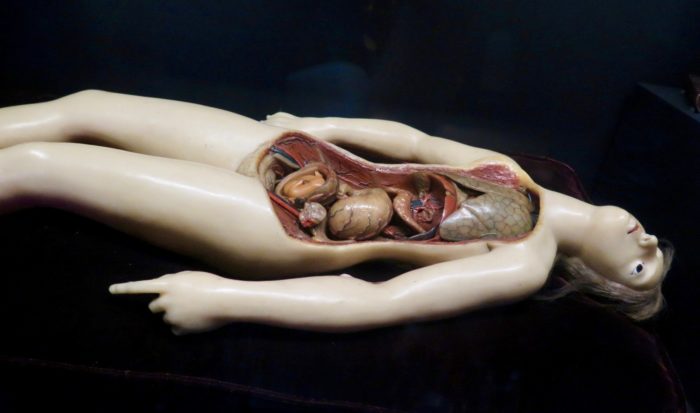 This 19th century, neogothic Artificial Arm was created from steel,  brass and leather. The articulated fingers are controlled using a brass button embedded in the wrist. 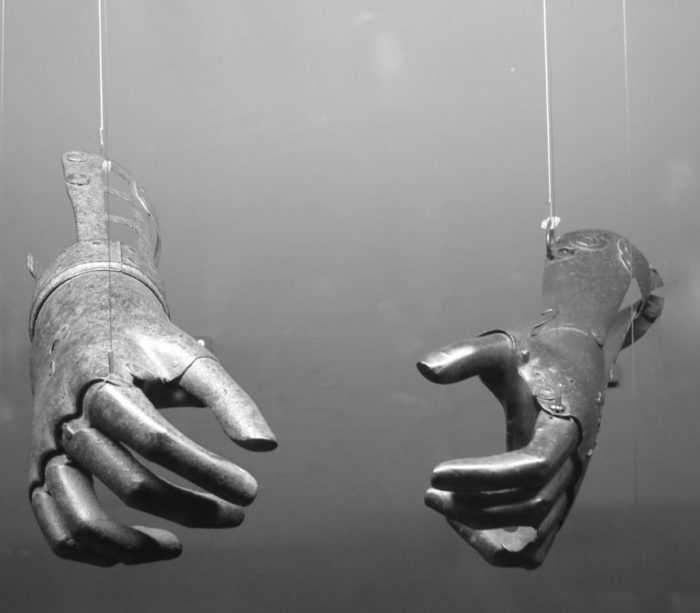 Other early automaton marvels include a Swiss Draughtmans-Writer that can recreate four drawings and a poem and a German Automaton Spider from 1604 that can creep across the table. This elaborate golden Rose Engine Lathe –  from 1750 and likely commissioned by Frederick the Great of Prussia – can carve an intricate geometrical pattern into a small piece of wood. 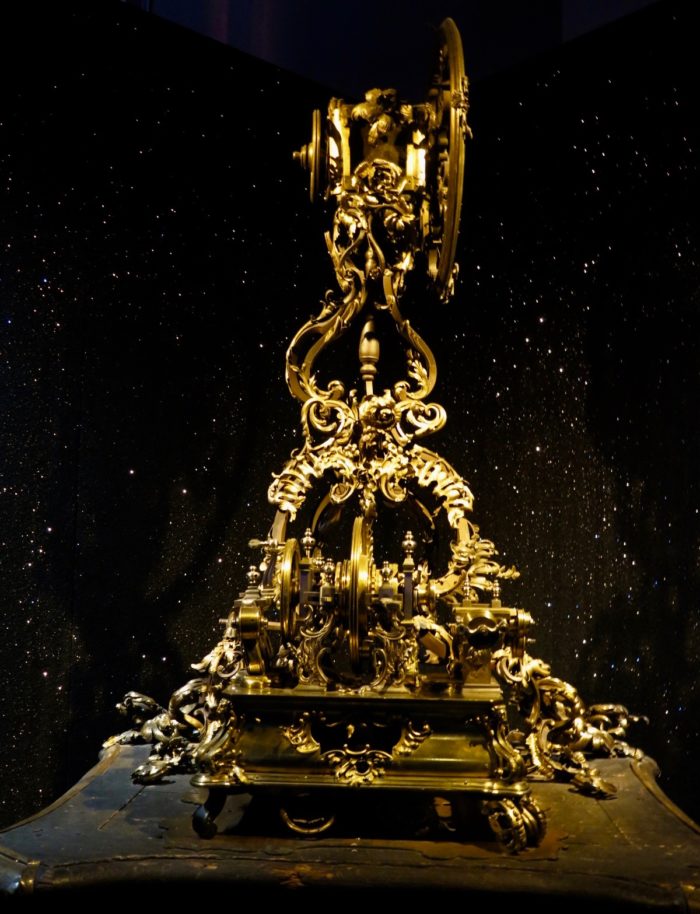 The word robot is derived from a Czech word for ‘forced labour’: robota. Robots found their way into films, such as Fritz Lang’s 1927 Metropolis.  Here’s a replica of Lang’s Maria, who was called a Maschinenmensch, or a Machine Man. 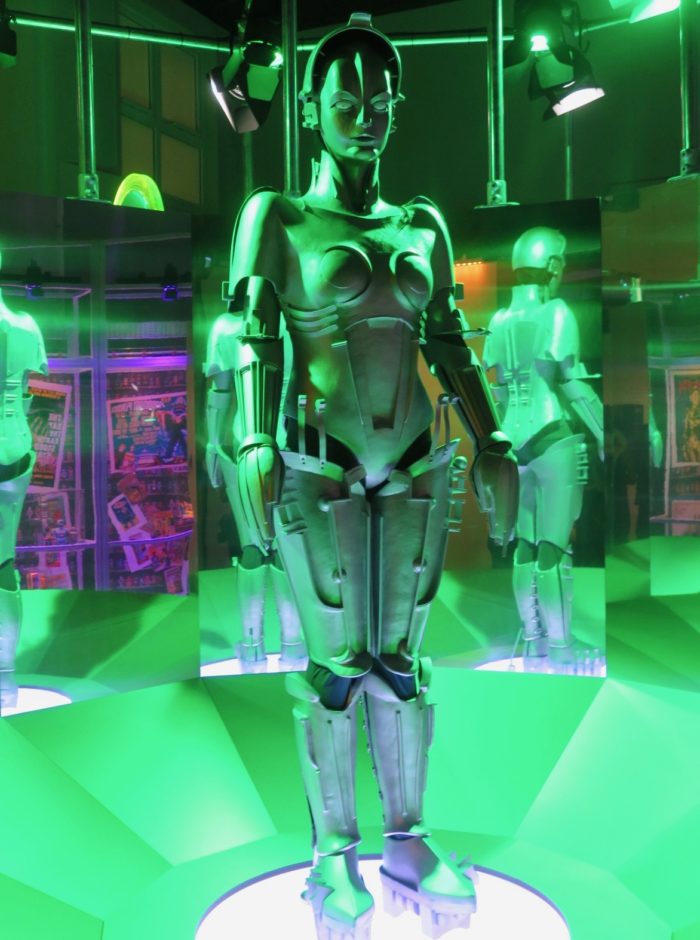 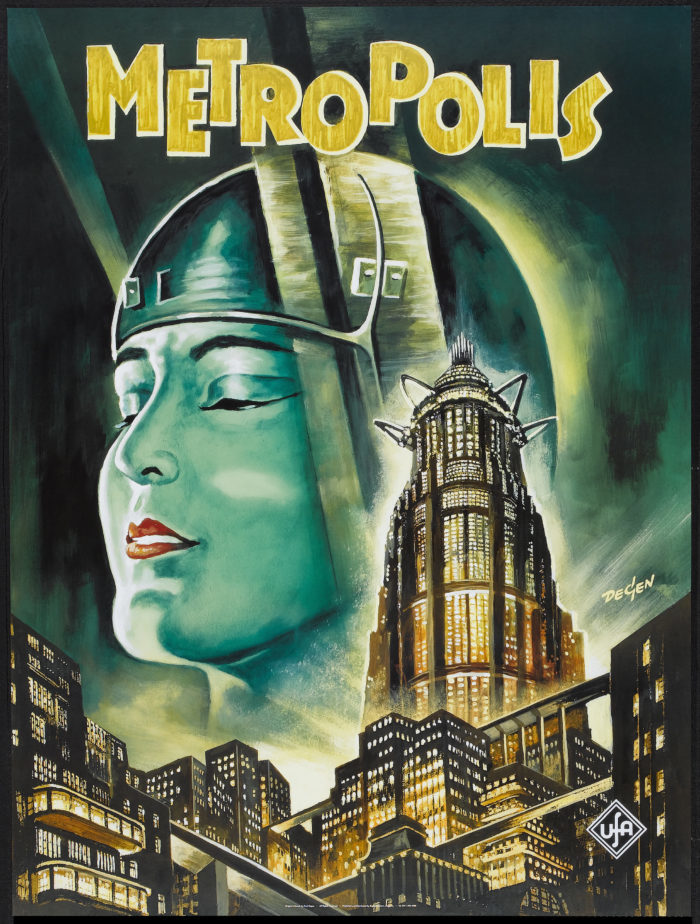 And the cinematic robots, many of them terrifying, continued to march their way across the screen: Forbidden Planet, Tobor Il Re de Robot. 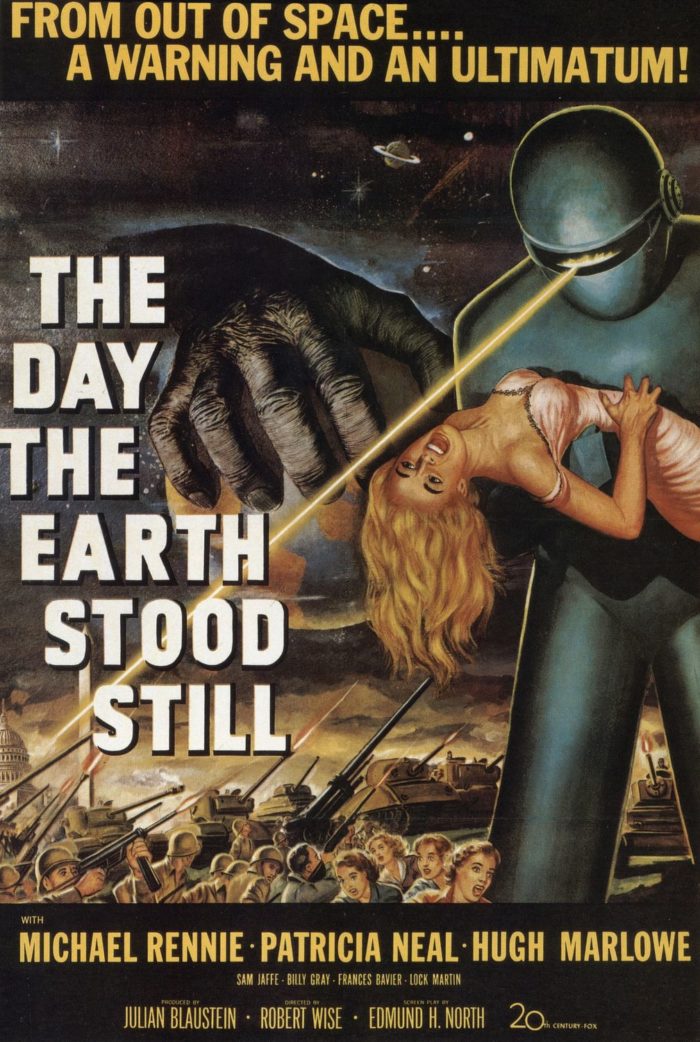 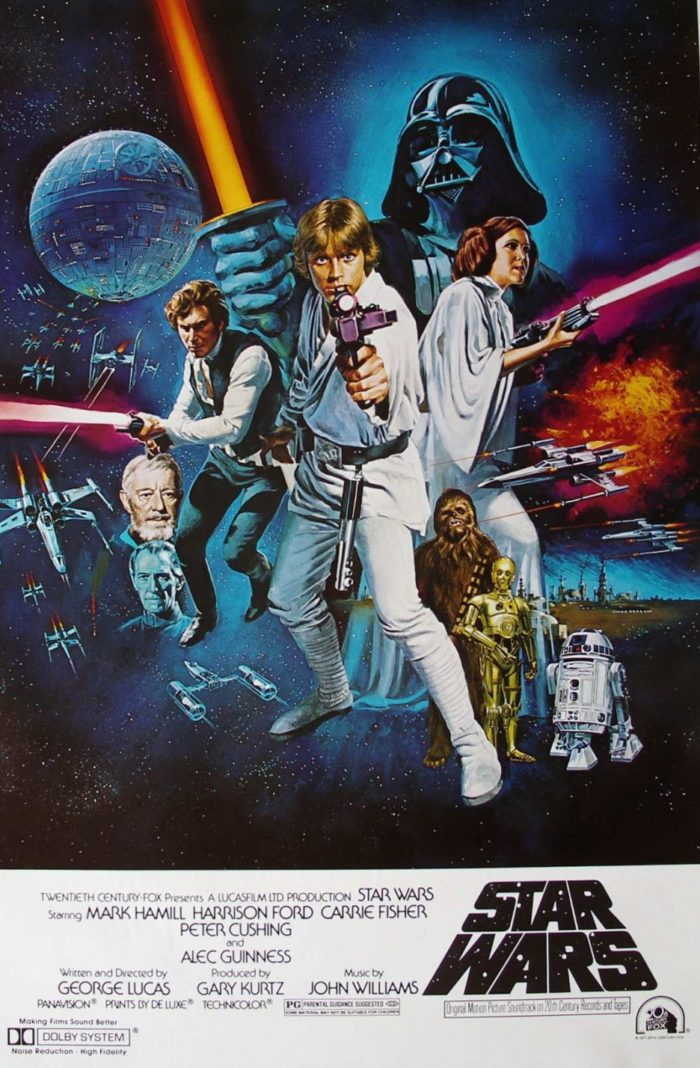 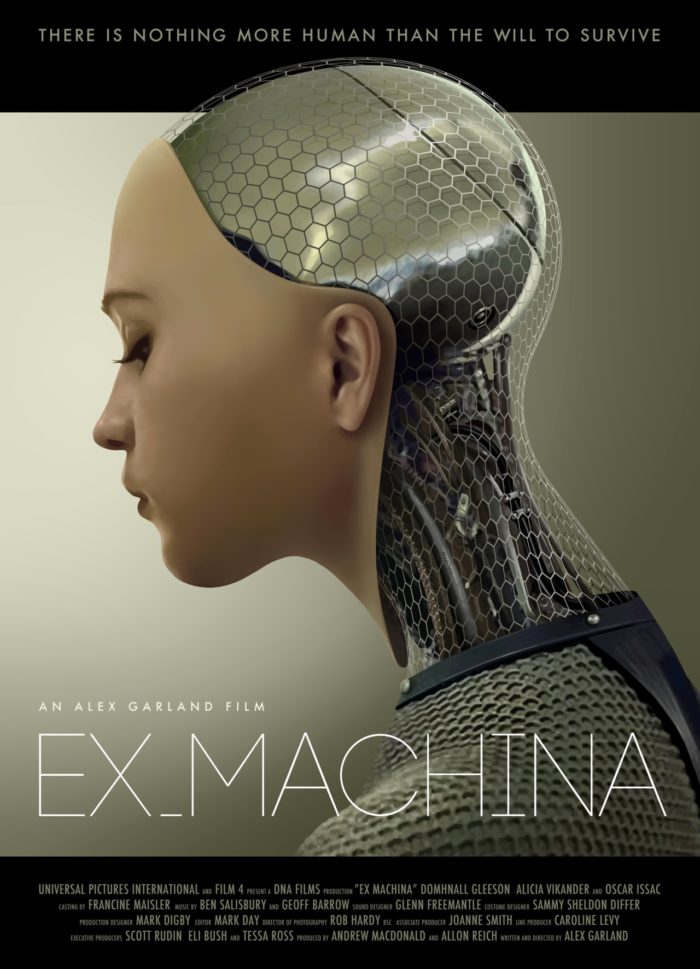 Here’s an early Humanoid Robot from the 1950s. Seemingly powered by a red-beating heart, he could smoothly extend both arms, one leg and move his head and mouth. 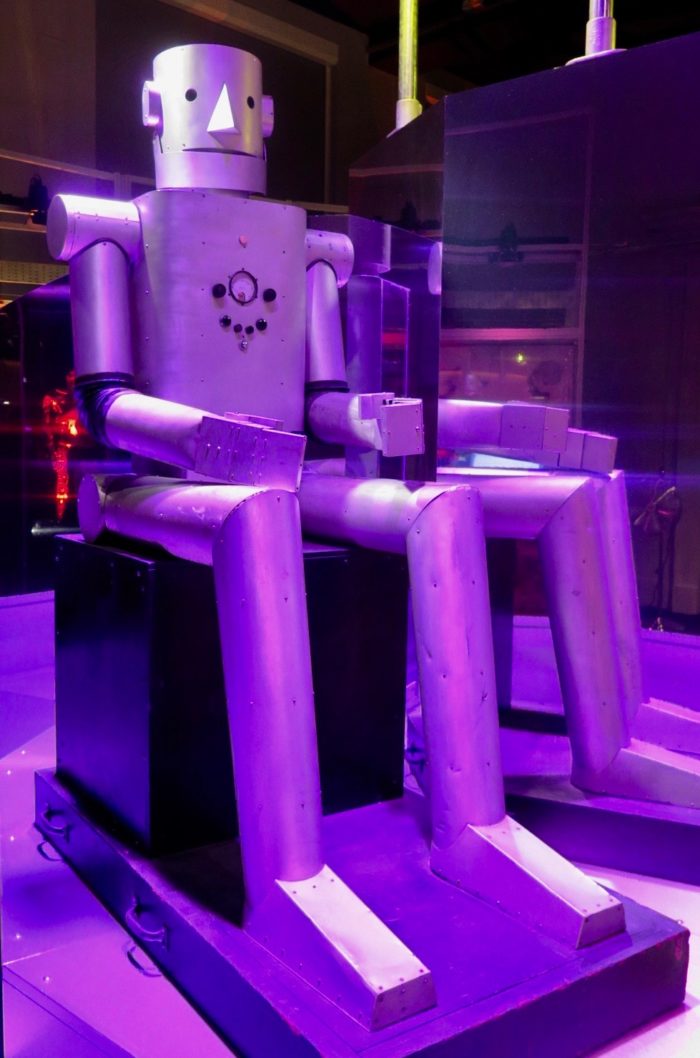 Poor Cygan had a tumultuous life after being brought into the world by Dr Piero Fiorito in Italy. First came the love – adoring show crowds who watched this 500k marvel dance, act and crush cans. His movements were powered by 13 electric motors and and radio control. Then came the neglect – people lost interest and Cygan was left to rust outside. Luckily, some kind souls finally offered Cygan a warm lab and some mechanical TLC. 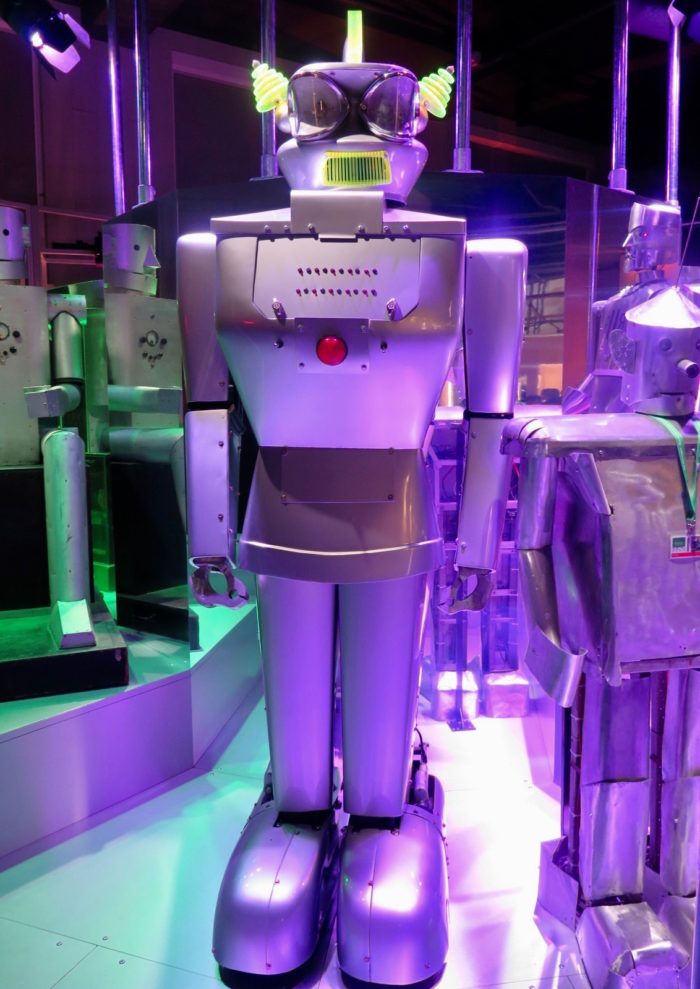 Locomotion was a great challenge for the humanoid creators. How to get their mechanical people to walk with two legs and balance?  The Bipedal Walker below is from the UK, 1987-97. It was the creation of David Buckley and the Shadow Robot Project Group. They achieved their locomotion goal by creating 28 artificial leg mucles that could tense and relax.

P2 the robot was the result of 10 years of secret engineering work at Honda. When P2 was finally revealed in 1996, people were shocked to see it walk confidently across the room and up stairs. It took so much energy for P2 to walk, its massive battery drained in 15 minutes.

These Byrun legs – prototype #3, created by UK roboticist Will Jackson in 2014 – are closely modeled after humans. With their bi-articulate muscles, the legs allow Byrun to save energy by moving its hip and knee joints simultaneously.

The Shadow Robot Company built this amazing Dexterous Hand in ~ 2013. It can make move its fingers and thumbs and make 27 different movements. Doing so allows it to thread a needle, grasp a drill and even stir stew – all acts that are most difficult to replicate. 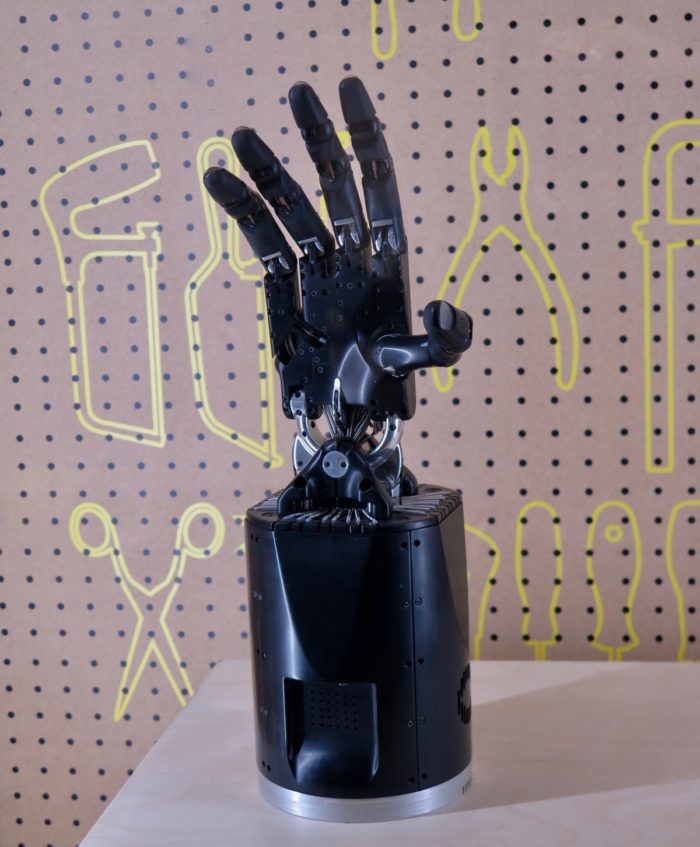 ROSA – Rob’s Open Source Android – was built in France by roboticist Rob Knight. To move like a human, ROSA has a plastic skeleton, ropes as tendons and motors as muscles. 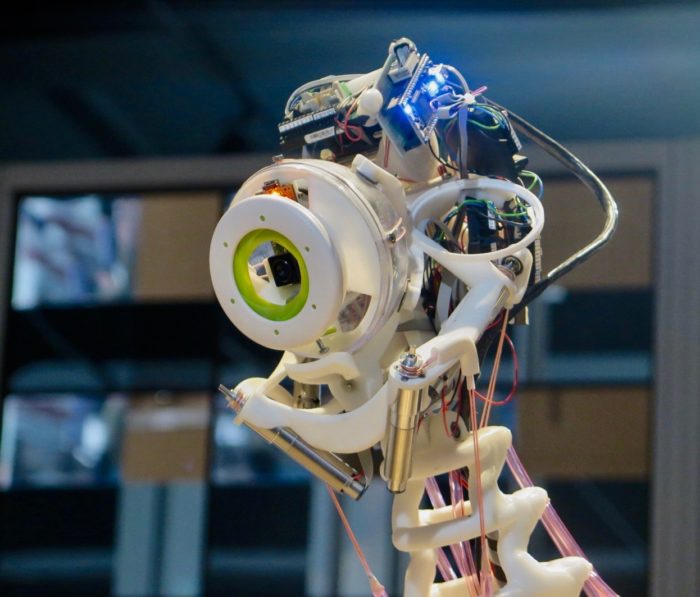 Inkha was gainfully employed from 2003 to 2015, working as a receptionist at King’s College in London. Created by Matthew Walker and Peter Longyear in 2002, sassy Inkha can show emotion, answer questions and offer directions. 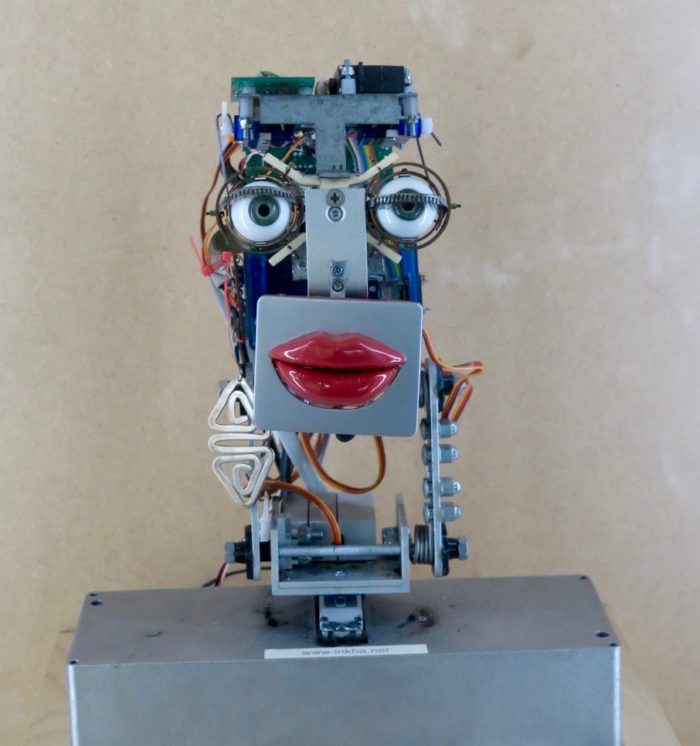 You might recognize the rather famous Nexi. Created in 2008 by the Personal Robots Group at MIT, Nexi’s body and 21 facial expressions are controlled by computer. 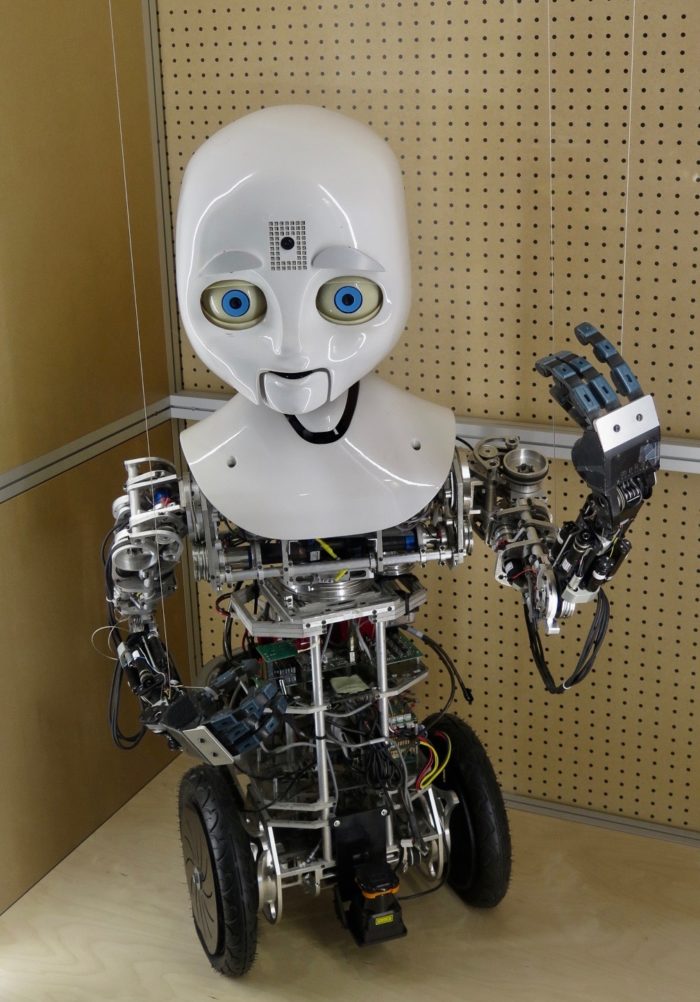 As of 2016, more than 10,000 versions of Pepper the Social Robot had been sold. Created in 2014 by the Japanese group, SoftBank Robotics, Pepper is designed to be intuitive and interactive. There is no sneaking up on Pepper. This popular robot knows that you are lurking and recognizes your face. Pepper can move autonomously, speak, understand what you are saying, recognize your emotions and provide a fitting behavioural response. You might have seen Pepper in airports or even have one at home. 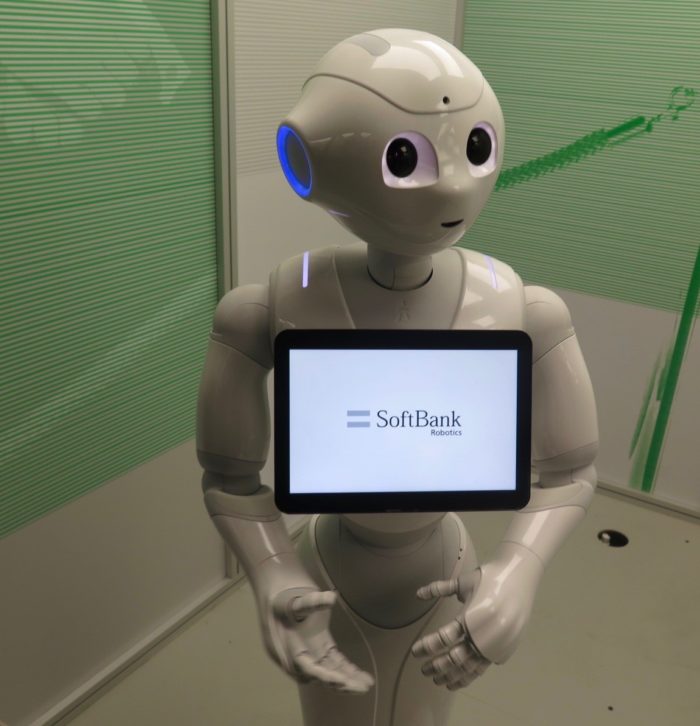 Pepper may be popular, but the Japanese Nao is used more than any other humanoid robot – to interact with children, greet all manner of customers and even play soccer! 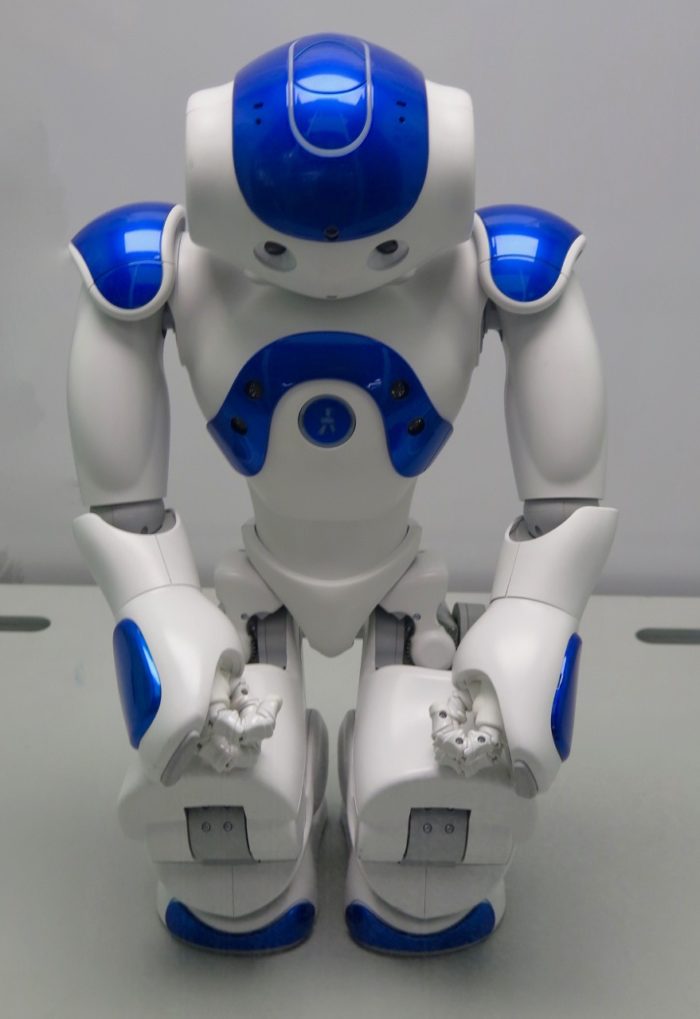 You might also recognize Kaspar – first created 2005 in the UK – who helps children with autism spectrum condition to read emotions and interpret behaviour. 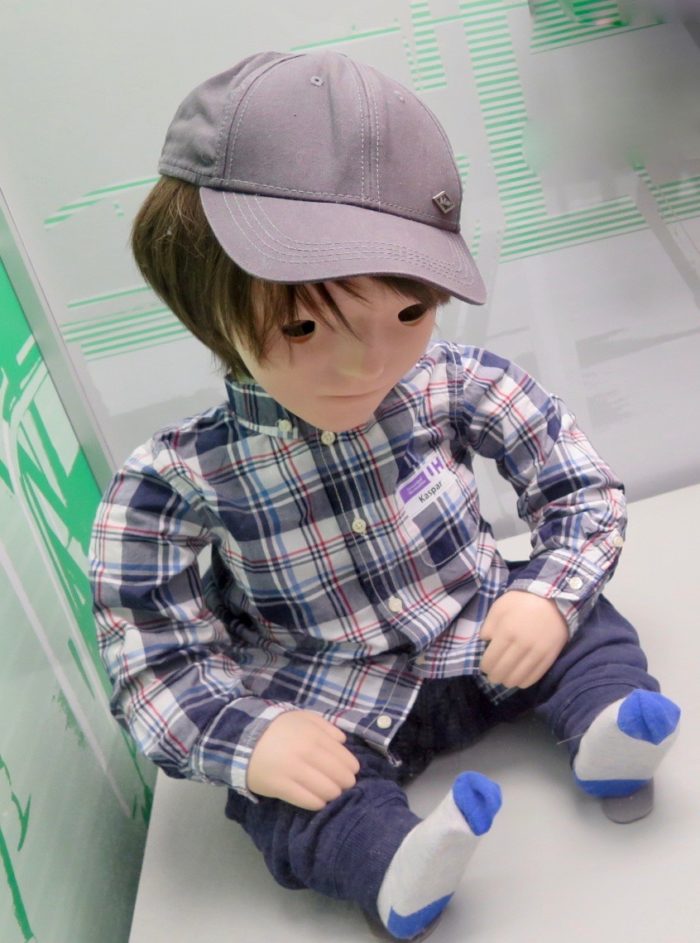 Do you want to cuddle the legless Telenoid or do you want it go back to the Uncanny Valley from whence it came? 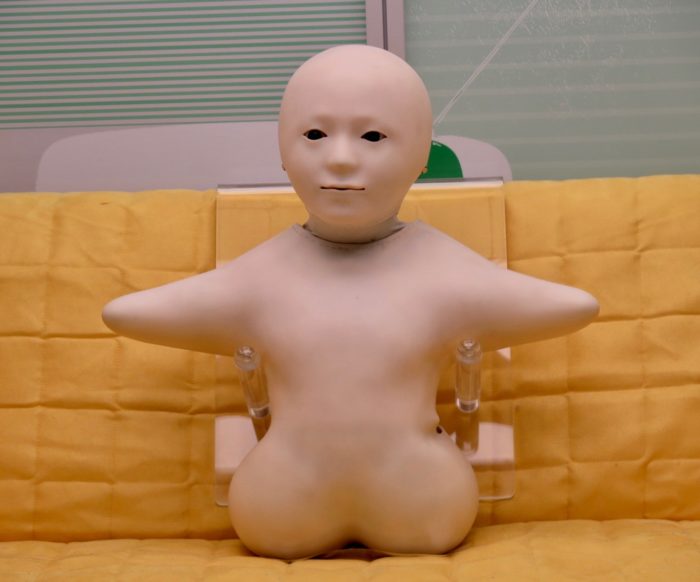 Telenoid, created 2013 in Japan, is designed to stand in for the person on the other end of a long-distance call. A camera and microphone records the sounds and movements of the person to whom you are talking. Your telenoid can then replicate those expressions for you.

This Animatronic Baby was created in London, 2016. How will you react to its pre-programmed movements? 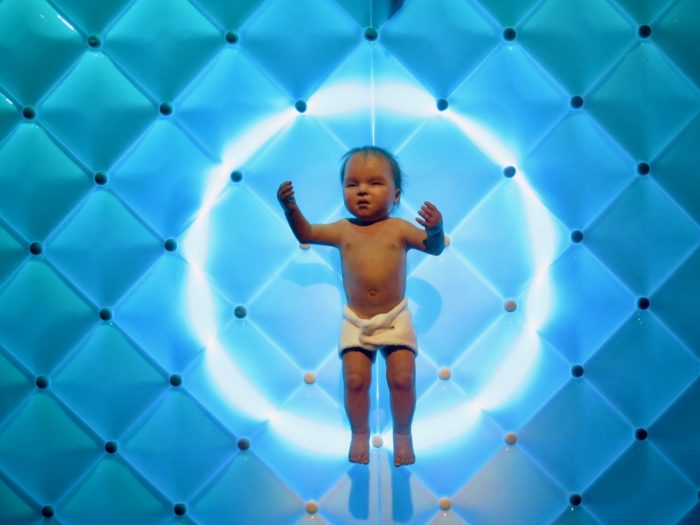 Harry, with his pliant lips and fingers, can play the trumpet. He was created by Toyota in 2005. 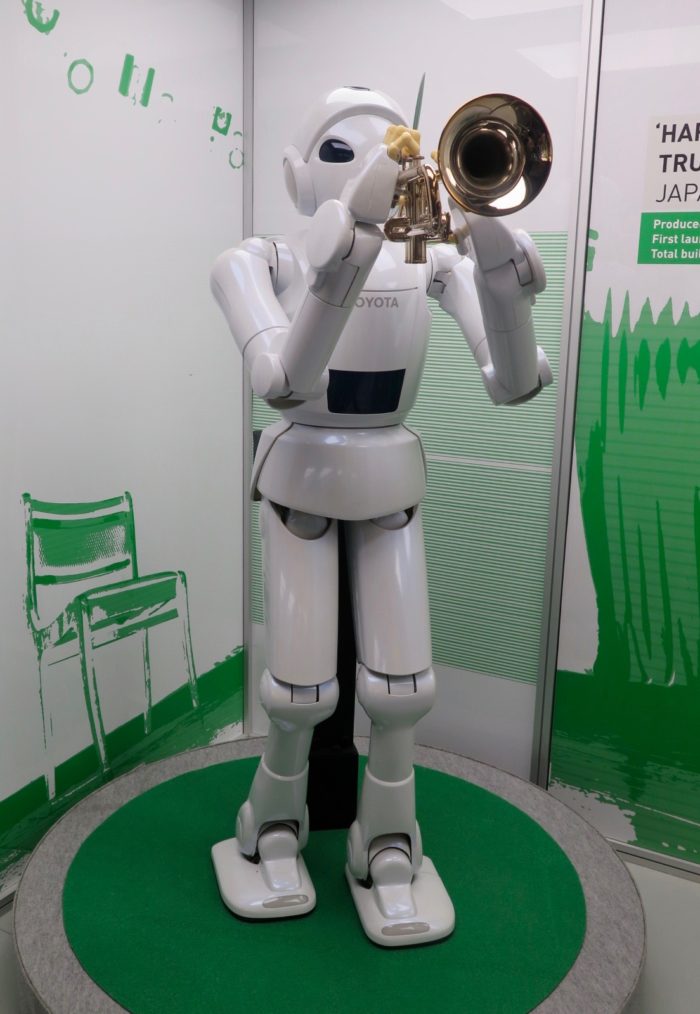 Here is the pioneering ASIMO – Advanced Step in Innovative Mobility – created 2000 in Japan. ASIMO is agile and intelligent. The 2011 version can run forwards and backwards, getting to a top speed of 7 km per hour. It can manipulate objects, jump, hop, walk on uneven surfaces and around obstacle courses. ASIMO can also kick a ball at a target, recognize faces, parse conversations and communicate through sign language. 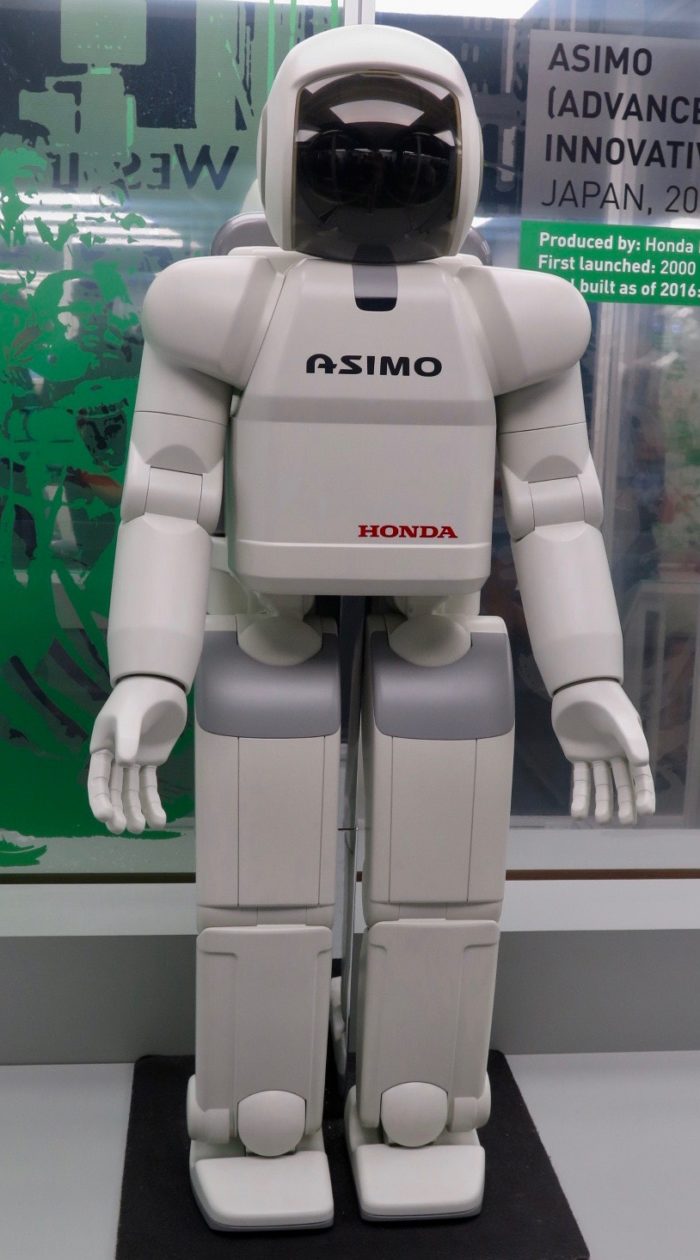 Finally, there is the famous Kodomoroid who works as a newscaster. She was created by industry leader, Hiroshi Ishiguro,  in Japan in 2014. She has teeth based on a cast of a model’s mouth, skin sculpted from flexible silicone and hair inserted by hand, one piece at a time. 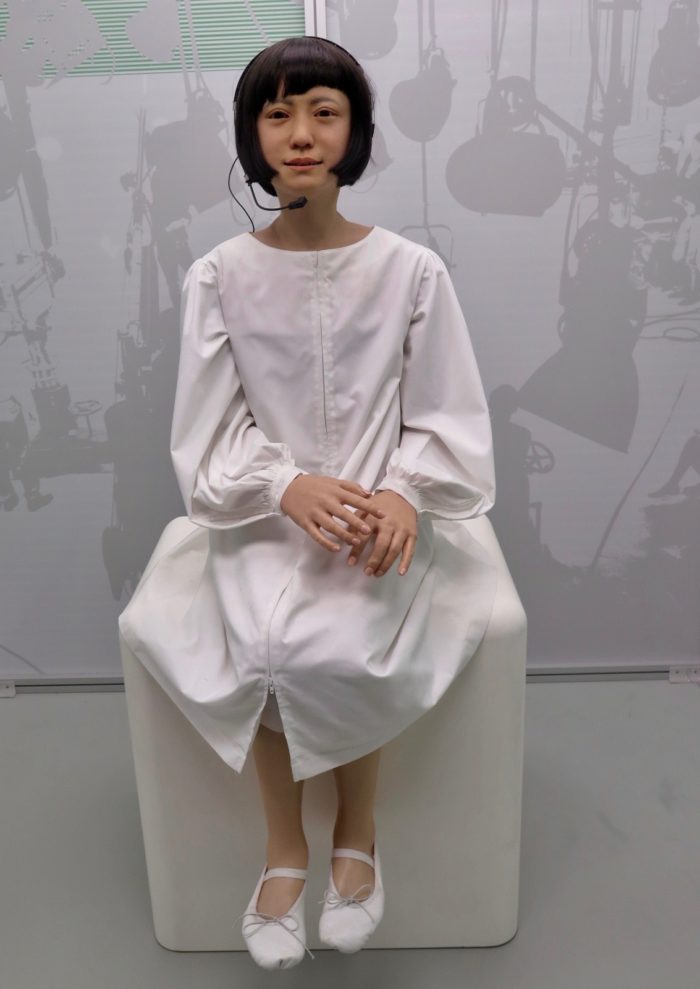 By following the history of robots, the London Science Museum exhibit tells us: ‘we trace our own hopes, fears and dreams.’ We also get a peek at the inner-workings of Maschinenmensch and the ingenious roboticists who create them. 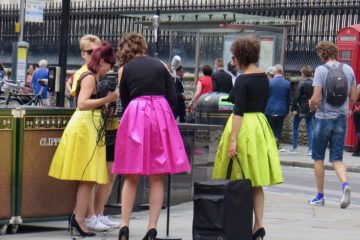