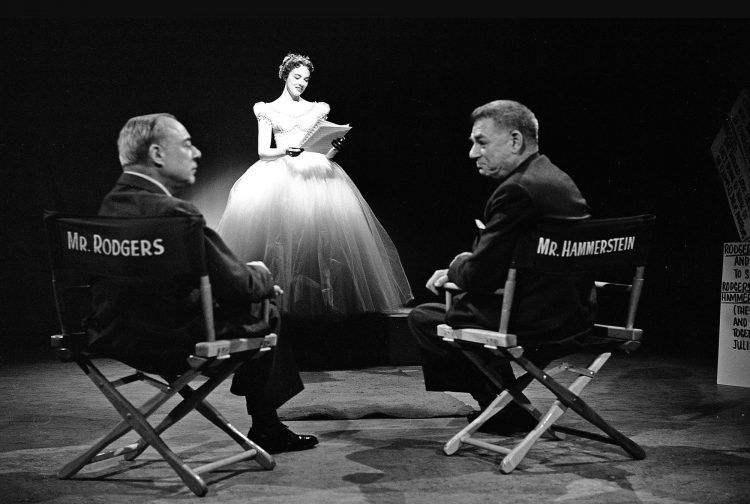 The Sound of Music, Oklahoma, Carousal, South Pacific, The King and I... Composer Richard Rodgers (1902-79) and dramatist/lyricist Oscar Hammerstein (1895-1960) were the brilliant minds behind the songs and shows that continue to fill our heads and stages today.

The industry powers-that-be came in convinced that Rodgers and Hammerstein could not build good shows together. As Rodgers said in a 1960 interview re-released by NPR: “There was an almost superstitious feeling on the part of the people in the business – that anybody who had worked for 24 years with one man, as I had with Larry (Hart), simply couldn’t hit it off with a brand-new partner.’

Rodgers and Hart – whose long list of hits together includes Blue Moon – had collaborated as most did at the time: music first, lyrics to follow. Not so Rodgers and Hammerstein.

“Oscar,” Rodgers explained, “is one of the few people in the entire world who has a – I’m talking about lyric-wise, of course – who has a tremendous sense of construction. And without a tune, his lyrics are beautifully built. And he likes the latitude of being able to write first without the constriction of a melody. On the other hand, I find that having the lyric in addition to the situation in the play is very helpful to me. It gives me an extra push into the solution of the problem of finding the tune.”

While many of their hits came to life on the stage, Cinderella – starring the luminous Julie Andrews – premiered on TV in March of 1957. Here’s a clip from the Rodgers and Hammerstein Society on their Cinderellas and Fairy Godmothers through time – from Julie Andrews and Edie Adams, Brandy and Whitney Houston on TV through Laura Osnes and Victoria Clark on Broadway.

The Rodgers and Hammerstein Organization runs an active YouTube channel with all sorts of clips from different generations of performances. Here’s Mitzi Gaynor leading ‘I’m Gonna Wash That Man Right Outa My Hair’ from the 1958 South Pacific movie.

For the last year, R + H have been running R+H Goes Pop where stars Broadway and beyond reimagine well-known Rodgers and Hammerstein songs. Here are hyper-talented Broadway and screen stars Jeremy Jordan and Laura Osnes with their mashup –  ‘The Next‘ version of ‘Ten Minutes Ago.‘