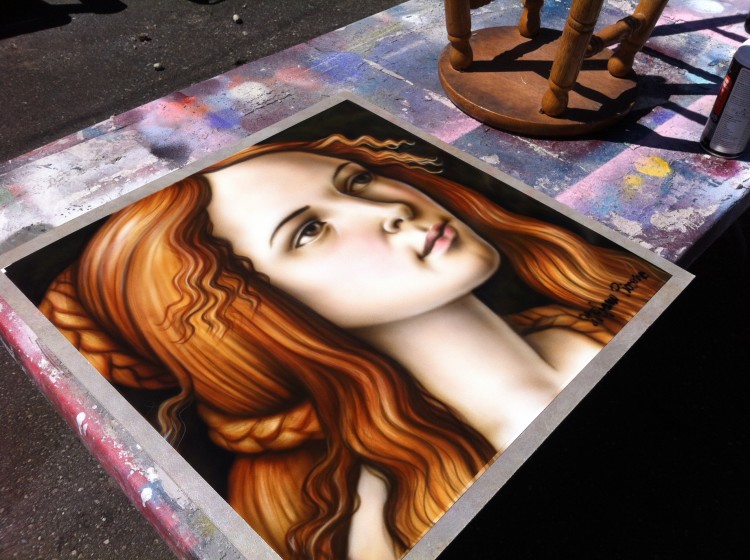 Before 3D glasses, 4D movies and Oculus Rift, we had trompe l’oeil. Trompe l’oeil is  defined by the Louvre Museum as: ‘a technique of painting or decorating which uses various artistic means to create the illusion of real three-dimensional objects or scenes.’

The 5th Century BC Greek painter Zeuxis was a master of trompe l’oeil, attracting real birds to his painted grapes. His rival, Parrhasius, one-upped him with a painted curtain that Zeuxis felt compelled to yank open.

In 1874, Pere Borrell del Caso created this particularly well-known example of eye-trickery in his Escaping Criticism. 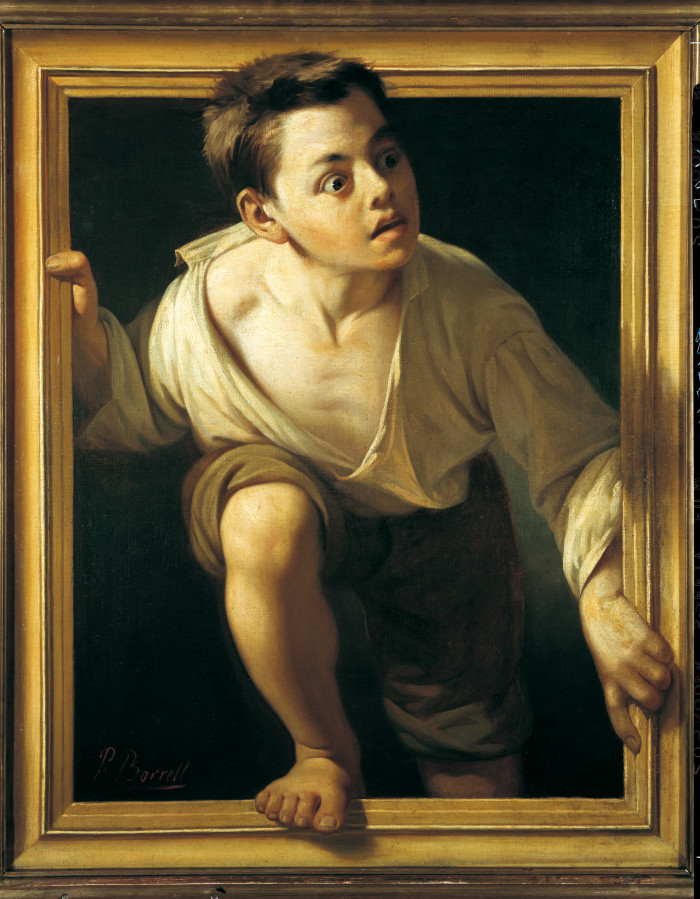 Trompe l’oeil may be an ancient art, but it is still embraced by certain modern artists and their clients. Stefano Piccone is a Vancouver muralist who spends his days applying these age-old techniques to ceilings, floors and walls.

Piccone is also commissioned to do faux finishes: “where I reproduce certain materials in paint – such as different kinds of stone and wood or creating colour blends and textures on walls or ceilings, venetian plaster, gilding.” One week, you might find him tackling a bedroom wall, the next – a dining room ceiling. Or, Piccone might be brought in to transform an entire room. He will often work alongside fellow artists, such as Ron Girotto.

A few years ago, a client hired Piccone to transform her ‘Great Room’ – a formal living room with a 400 square foot barrel vaulted ceiling. “I designed a trompe l-oeil decoration that, so far, has been the most ambitious project for me. I had a big ornate scrolling, illusionistic framework that ran around the perimeter. Then, another level behind it, with sections of balustrade painted in perspective. The corners had concave details that contained ornamental pots, each with a tree that was chosen for its symbolism. And behind that there was another vault with a quatrefoil opening to the sky in the middle.” 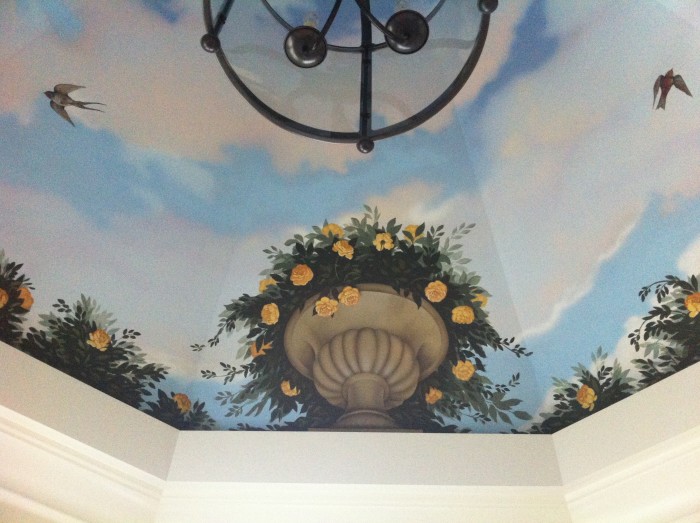 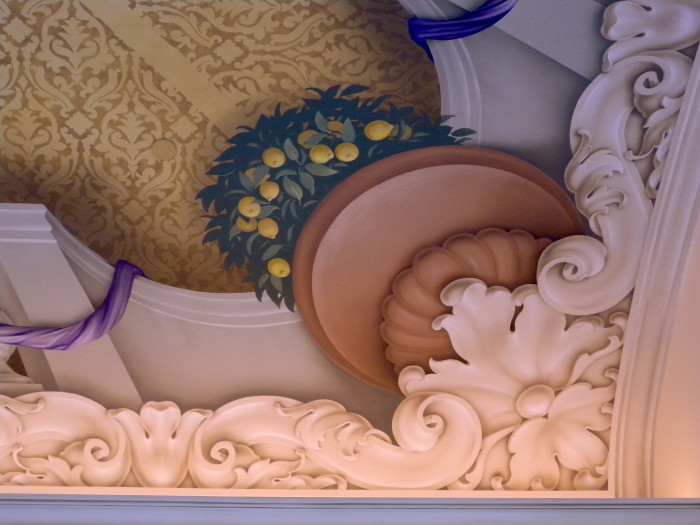 It was that perfect project where the client was trusting and the challenges invigorating. “It took me over three months to paint, and I could have kept going if we were going to populate the space with more details.”

Piccone grew up in Vancouver with Italian parents. “My sisters and I were lucky that Mum and Dad could send us to Italy to visit our relatives every other year or so.” With each trip, he became more intrigued by Italian art and culture. “There is such a strong tradition of architectural painting there. It is the birthplace of illusionistic perspective. And that Italianate style for me, it connects me to my family, my childhood and, on an even deeper level, my Mum, who passed away when I was little.”

“I think it must be a common experience,” Piccone reflects, “for first generation Canadians to try and bridge between the new and old countries. I think that my work often reflects this.”

Piccone always admired the ability of his construction-industry father to make or fix just about anything. It was through his Dad, that Piccone met his first artistic mentor, Brent Beatty, who was painting a mural on a building that Piccone’s Dad had just finished. “It was fascinating to watch him work on that trompe l’oeil and transform the space.” That summer, Beatty hired the 17 year old Piccone to help him paint a mural for the Il Barino restaurant in Yaletown.

After graduating with his Arts degree from UBC, Piccone found another mentor in painter Stefanie Mescinger, who wanted to pass on her skills before she retired. “She hired me and taught me a lot. How to prep and produce a really good paint job, for one. And when opportunities for faux finishes or mural work came up, she would put me in the front lines. We experimented a lot. I still have her voice in my head, 20 years later, telling me how to fold my sandpaper!”

Through these experiences, Piccone realized that he could make a career of painting. These days, he will work directly with clients or designers. He will gather their visions, then go deep into research online or in his large collection of books. He will start with loose sketches. Once he has client approval, he will begin mapping out the picture on the space to be painted. 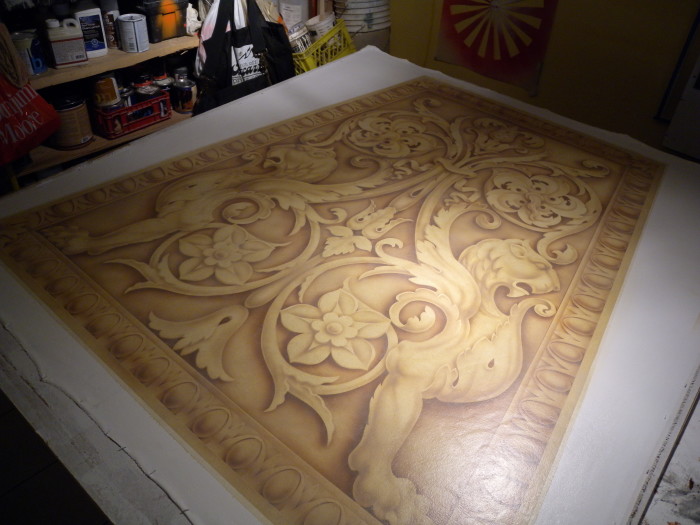 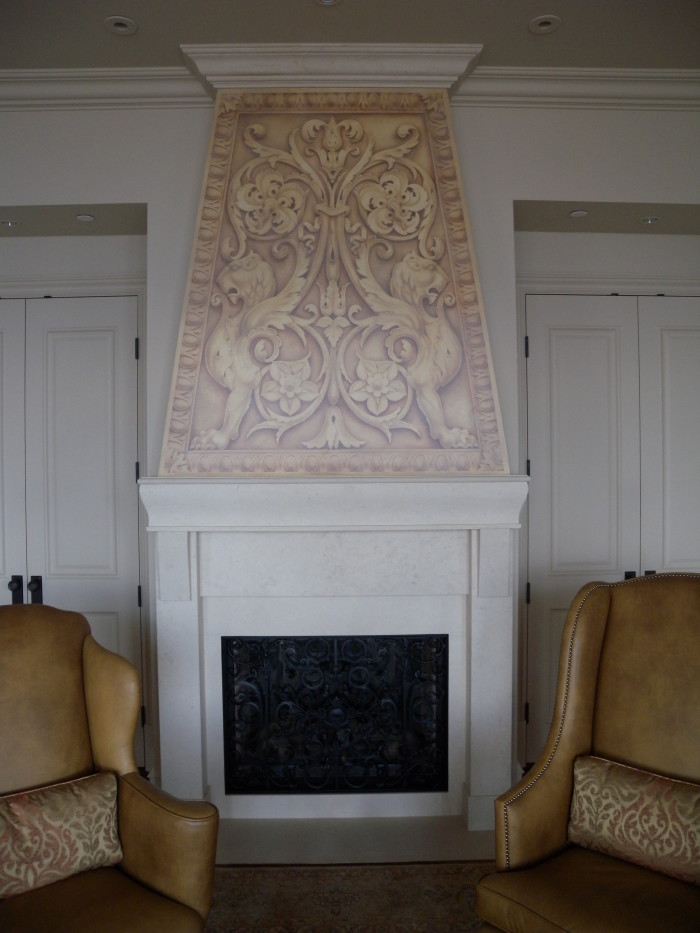 “I create life size drawings for the decorative details and all the stuff that may repeat or has to be crisp, perfect or symmetrical.” Better to get those details worked out over a table, rather than craning up to a ceiling or huddling over a floor.

“I used to paint floors more often, and they have made me appreciate painting ceilings a lot more! No one walks on them, or drags heavy furniture across them. Basically, aside from the odd champagne cork, they are pretty safe. Either way, it is very rewarding to see a project finished.”

When he gets the chance, Piccone still likes to visit Italy for inspiration. “One of my favourite cities is Genoa. There is one street in particular called Via Garibaldi whose row of palaces were all built in the 16th Century. There is no shortage of inspiration in their stunning rooms. To think that they worked in the much harder medium of fresco and without the use of laser levels and airbrushes, yet created such complex perspectives. It’s extremely humbling.” 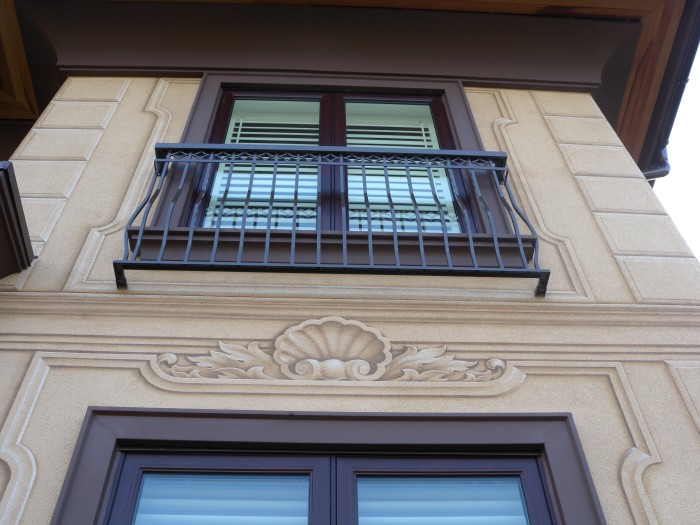 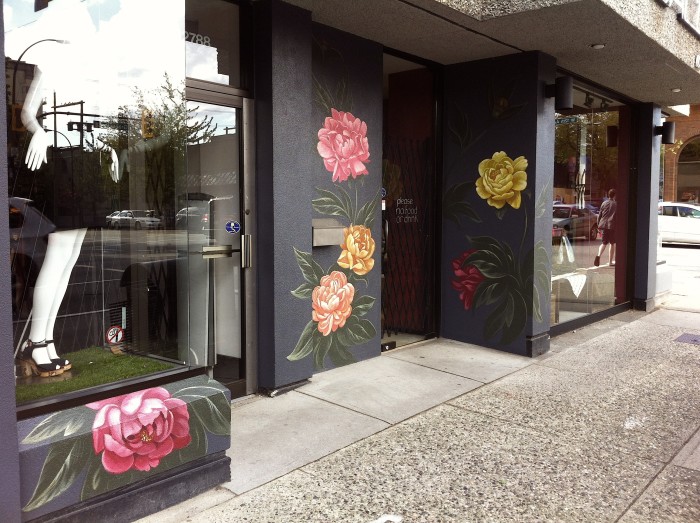 Speaking of humility, Piccone is not sure that he has “any profound wisdom to share” with others seeking a creator life. “I think that as an artisan, you must always be looking to improve your craft. So, be critical of your work, notice what work you admire and what you can learn from it, and see where the striving leads you.”

* Photos of his work courtesy of Stefano Piccone