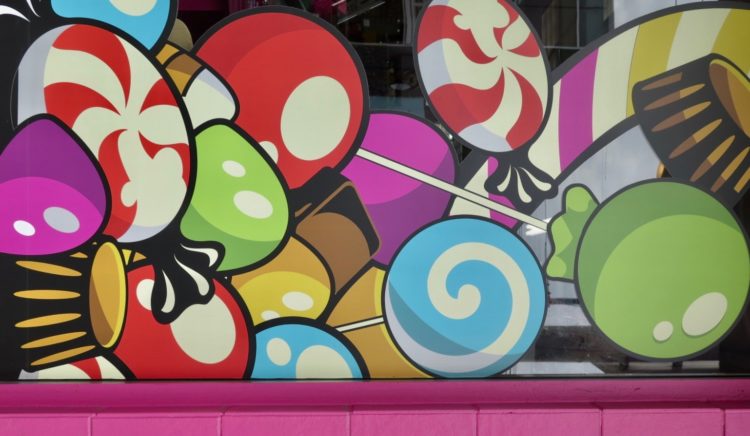 ‘And then again,’ Grandpa Joe went on speaking very slowly now so that Charlie wouldn’t miss a word. ‘Mr Willy Wonka can make marshmallows that taste of violets, and rich caramels that change colour every ten seconds as you suck them, and little feathery sweets that melt away deliciously the moment you put them between your lips. He can make chewing-gum that never loses its taste, and sugar balloons that you can blow up to enormous sizes before you pop them with a pin and gobble them up. And, by a most secret method, he can make lovely blue birds’ eggs with black spots on them, and when you put one of these in your mouth, it gradually gets smaller and smaller until suddenly there is nothing left except a tiny little pink sugary baby bird sitting on the tip of your tongue.’ 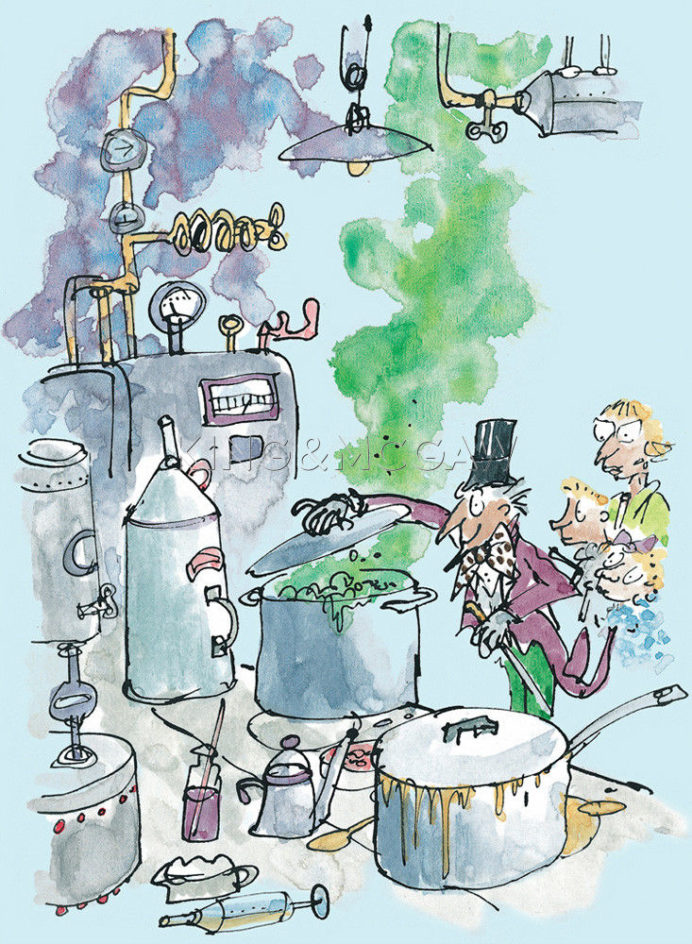 As a child, Roald Dahl secured his beloved candy from Mrs Pratchett’s Sweet Shop in Llandaff, Cardiff. His favourite treats were said to be licorice bootlaces and sherbert suckers, but Dahl and his friends also marvelled at the colour-changing gobsmackers and the chloroform-flavoured Tonsil Tickler lozenges.

‘Pear Drops,’ Dahl writes, ‘were exciting because they had a dangerous taste. They smelled of nail-varnish and they froze the back of your throat. All of us were warned against eating them, and the result was that we ate them more than ever.’

Mrs. Pratchett’s candy was good, but Dahl and his friends were not the slightest bit delighted by the dirt-caked owner, Mrs Pratchett. She was, Dahl wrote, ‘a small skinny old hag with a moustache on her upper lip, little piggy eyes and a mouth as sour as green gooseberry.”  Mrs Twit – brought to life by illustrator Quentin Blake –  was said to have been inspired by this horrible Mrs. Pratchett. 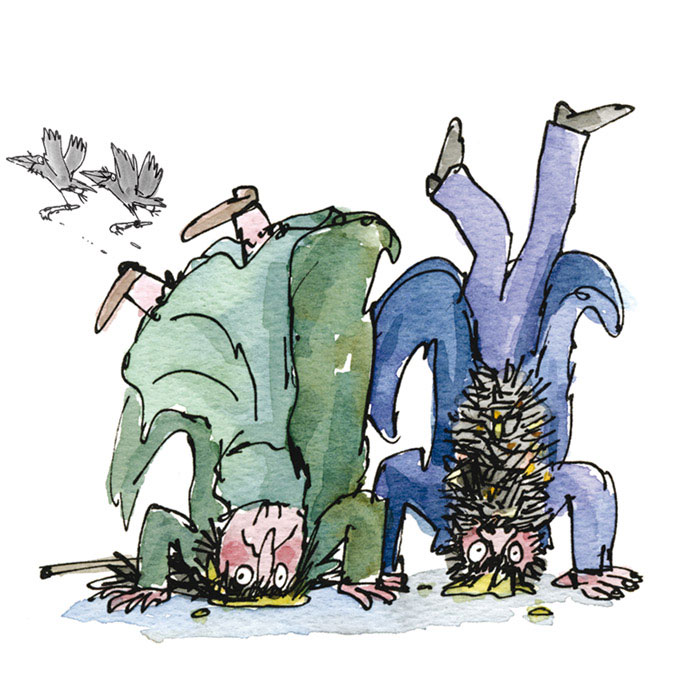 The ever-mischievous Dahl did get his revenge on Mrs. Pratchett with a dead mouse hidden in her gobstopper jar. Unlucky for Dahl, the school found out and the the future creator of Willy Wonka, The Twits and George’s Marvellous Medicine got a vigorous caning from the Headmaster, while Mrs. Pratchett looked on with delight.

If Charlie, Grandpa, a de-blueberried Violet Beauregarde and Roald Dahl came to Vancouver, they would have to visit Candy Aisle.  Any time we have visited, the store-minders have been entirely pleasant and – perhaps as a result – the gobstopper jars are murid-free.

The award-winning family business, headed by Jason McCann, has been running since 1998. It’s now at three locations – 4th and Arbutus, Robson and Commercial Drive. In it, you’ll find candies from your youth – more impressive if you weren’t born yesterday and new twists on old favourites – like mini pastel all-sorts with jellies. The more adventurous can try ‘delights’ like a tequila worm in a lollipop or, when they get them back in stock, cricket suckers. 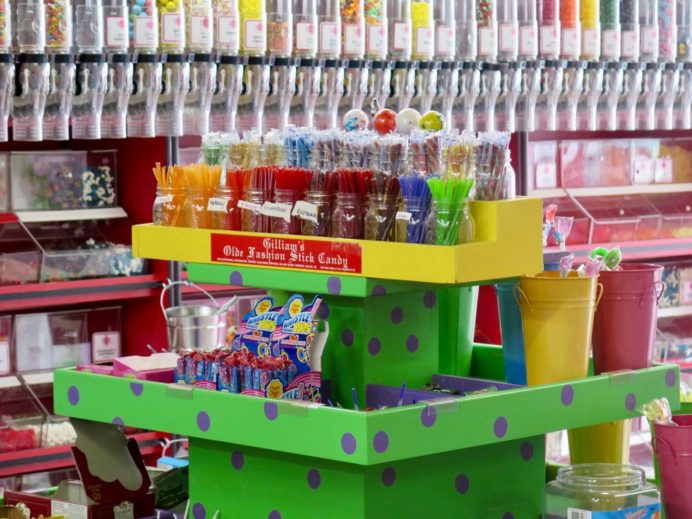 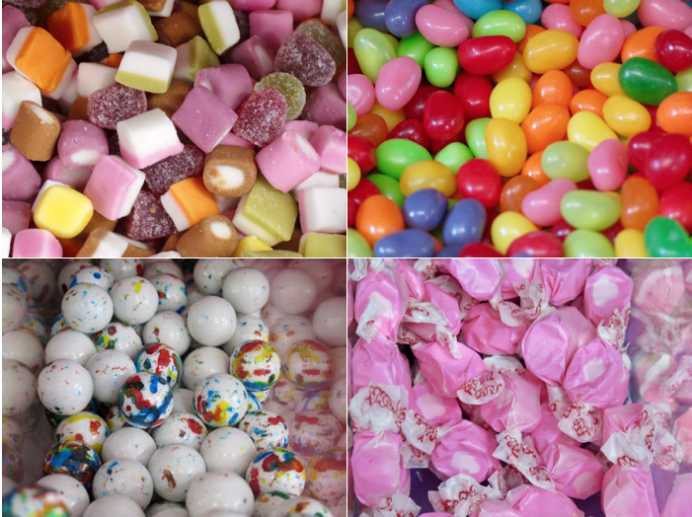 Mrs. Pratchett, Dahl decried, was all kinds of stingy. “The other thing we hated Mrs Pratchett for was her meanness. Unless you spent a whole sixpence all in one go, she wouldn’t give you a bag. Instead, you got your sweets twisted up in a small piece of  newspaper which she tore off a pile of old Daily Mirrors lying on the counter.’

As you make your way through Vancouver’s Candy Aisles, you can take as many bags as you want to lug home all of your sweets.