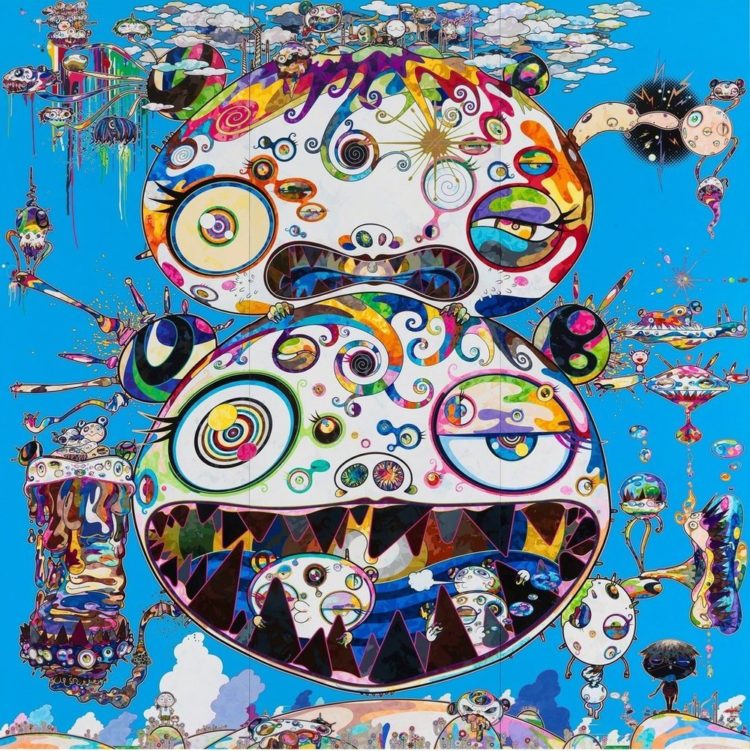 If you haven’t been yet, if you’ve been waiting for the crowds to dissipate, wait no more. The Vancouver Art Gallery’s Takashi Murakami exhibit, The Octopus Eats Its Leg, closes on May 6th. Given Murakami’s popularity, the VAG has extended gallery hours until 9pm for the last week – April 30th to May 6th.

This traveling show – created by Michael Darling, Chief Curator at the Museum of Contemporary Art Chicago – features more than 50 works. It traces Murakami’s development from the 1980s to 2017.

Murakami’s show opened at MCA Chicago in June of 2017: ‘Known for his collaborations with pop icon Kanye West and fashion house Louis Vuitton, and for vibrant anime-inspired characters, Japanese artist Takashi Murakami (b. 1962) has blurred the boundaries throughout his career between high and low culture, ancient and modern, East and West.’

The show was the museum’s most popular exhibit of all time and Murakami and Darling have been asked to film a number of interviews around their collaboration. “I talked you into this crazy idea,” says Darling to Murakami, “of trying to focus on the development of your painting over the years and, in particular, I convinced you to start with some of your very earliest pieces.”

Murakami was less than keen on some of the earlier works that Darling was determined to include.
~
Picture of a turtle. Does it dream of the Lindberg Star? 1987 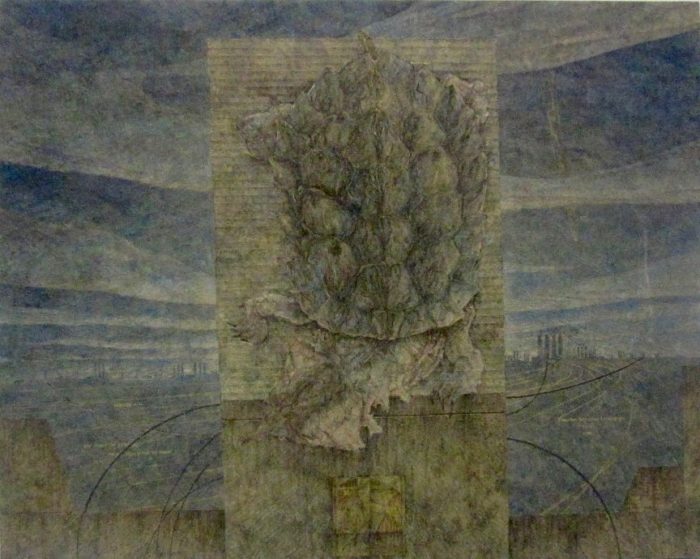 ~
“When I painted this painting, it’s really half-baked. It’s a painting of a turtle, called mata mata in the Amazon area. I’m really embarassed of this painting. Michael really wanted to include this in the show. I resisted. I really resisted to the end, but he pushed it into the show, so I’m very embarassed and only have bad memories about it.”

How did The Octopus Eats Its Own Leg titling come about? Murakami has offered different explanations, but one relates to his reticence around the early pieces. “This show is a retrospective, that’s why hanging on the wall are some of my old paintings. But to myself, I have strong criticism. I want to say it looks like an octopus is eating its own leg.”

We learn that Murakami’s initial dreams were not around being a painter. “First, I really wanted to become an animator, and that’s what I wanted to study, but unfortunately, even to this day, I have no talent… That’s why I chose to study drawing and painting in university and I chose Japanese painting, Nihonga, because I thought it would be easiest to get in. However, I spent two years not getting in. After university, I also trained to draw manga.”
~
Klein’s Pot A. 1994-97 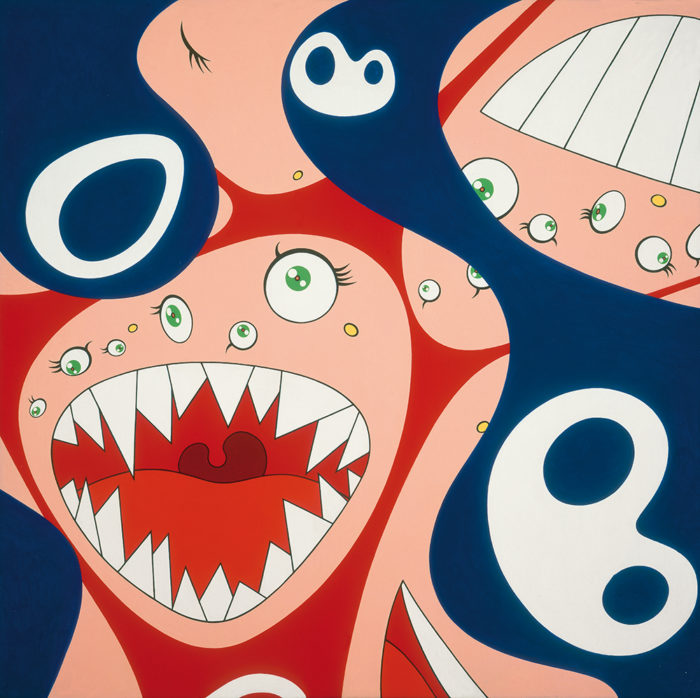 ~
MCA Curator Michael Darling asks Murakami about the evolution of his most quickly recognizable character, Mr. DOB. People often misinterpret the story, Murakami explains. He had noticed how often Japanese contemporary artists were mimicking American artists, such as Barbara Kruger, known for her use of text in art. Murakami admired these American artists, but despised the imitation. As he worked to develop his own take on language arts, Mr. DOB emerged. 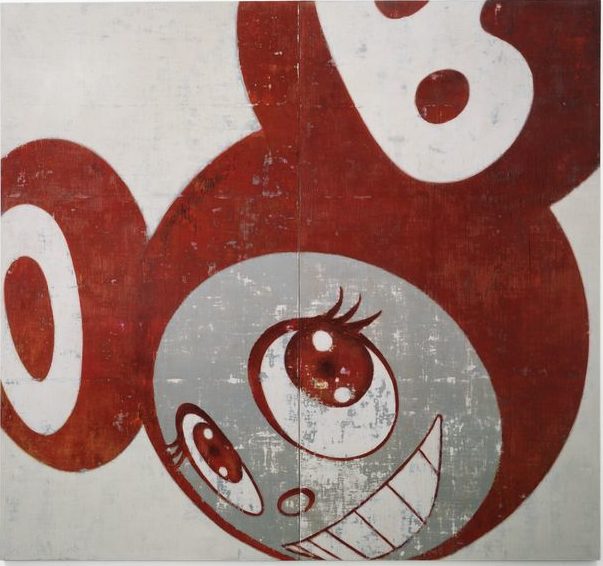 ~
Murakami talks about his painting process. “When I’m making my drawing, I listen to popular music. Recently, it’s DJ Khaled and Migos. Popular sound sometimes is good, sometimes is not a fit. 50% is new thing, 50% is my old music, Japanese pop music.”
~
From the perceived debris of the universe, we are still yet unable to reach the state of nirvana. 2008 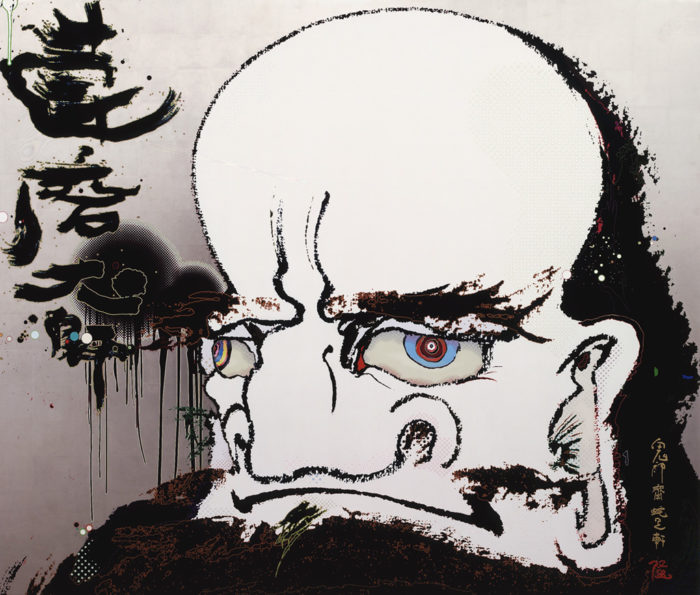 ~
“When I’m making a big painting or the deadline is very tight, I have to sleep on my studio floor… Our studio has a lot of rules. One of the biggest rules is please don’t ask me questions when I’m taking lunch or dinner.”

Darling asks Murakami about certain paintings that represent turning points in his career, such as Tan Tan Bo Puking – a.k.a. Gero Tan. 2002
~

~~
“This piece was a big big turning point,” says Murakami, “because I was 36 years old, I got gout because I ate the noodle every day and smoking, no sleeping. It looks like a very bad condition for the lifestyle. And then my leg was double scale. I went to the hospital and they say I have the gout…that moment, I thought ‘I will die soon.’ One of my characters, DOB, is dying…he still wants to grow, still wants to understand the world, but is in the process of dying. That is a very honest feeling.”

Isle of the Dead. 2014 is another painting that Murakami feels represents a pivotal point in his career.
~ 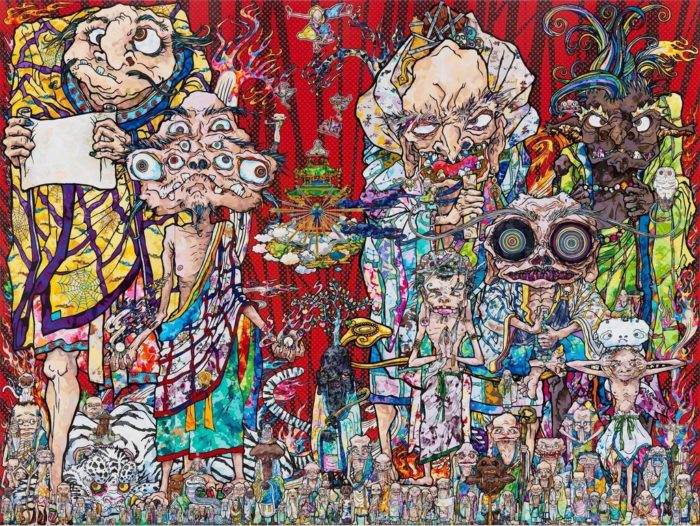 ~
“After the great earthquake and tsunami in 2011, the fact that tens of thousands of people died in my own country and also very close by to where I live was a really big reason that I turned to this theme and also I had a huge resistance to radiation and nuclear power plants..since when I was young. But just an hour and half away by car from my own studio in Fukishima, the nuclear power plant exploded twice and my Mother has actually experienced the Nagasaki atomic bomb and she has told me that after the bombing, the sky turned rainbow-colour and around my studio, a day or two after, when the nuclear power plant exploded, the wind was really strong and I looked up at the sky, it looked purple. At that time, I thought maybe it’s not really the time for me to be exploring this Western-themed contemporary art.”

Murakami started taking a more active interest in Arhats and religious Japanese paintings of the past. “I reinterpreted them in my own way.”
~
From 69 Arhats Beneath the Bodhi Tree. 2013 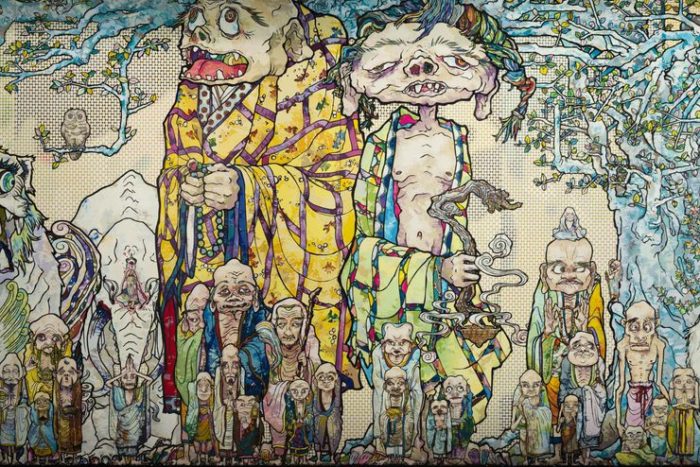 ~
“When young people come to this show,” Murakami says, “they can see that a career is not built in the short term. It’s long-term. At the starting point, everybody is the same.”

Here’s a look back at the 2016 VAG show where Murakami played a different role as curator.