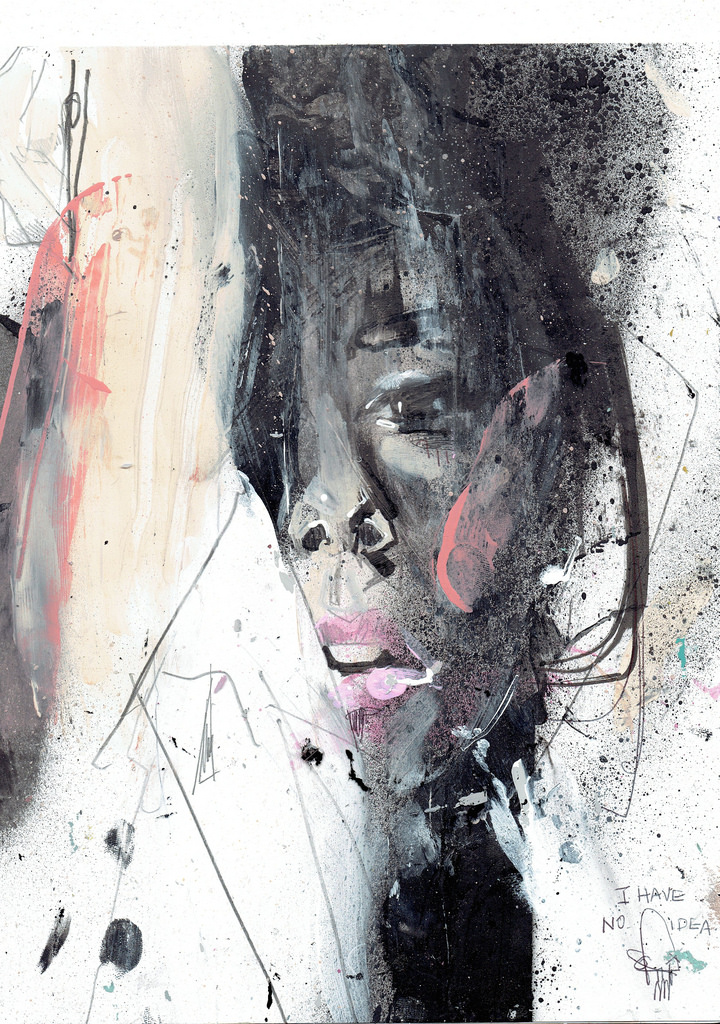 I first heard about Terrence TERBYWONDER Bunting through another gifted artist. The two of them were guests at a ‘do anything you want to the walls, for tomorrow we renovate’ party.

Everyone was busy painting, but gradually the others dropped their own brushes to stare at TERBYWONDER. The artist was swiftly filling up his wall with a fully realized portrait of a beautiful woman: head to toe, outfit, flourishes, done. “It was unbelievable how quickly he was working. He is so talented.”

It was his high school best friend who dubbed him ‘WONDER,’ as he watched him effortlessly exercise his talents. The ‘TERBY’ was a derivation of the short-brimmed derby hat he used to sport. “He put the two together and it kind of stuck.”

TERBYWONDER has been drawing for as long as he can remember. As a young child, he was inspired by his father, who worked on tugboats and drew in his spare time. While his Dad practiced on Disney cartoons, TERBYWONDER would recreate characters from his favourite comic book artists. Tops on his list were Joe Madureira with his Battle Chasers and Uncanny X-Men and Todd McFarlane and Spawn.

Every Christmas, TERBYWONDER’S Dad found extra work doing the Christmas windows for Canadian Tire. “He would bring me along. I would watch what he was doing and make my own version on paper.” His Dad used dollar store acrylic craft paints for his Christmas window creations and these are the paints that TERBYWONDER still likes to use for most of his work. “They help with my style.”

At the end of high school, TERBYWONDER got into some graffiti with friends. “For a very brief time. It was long enough to influence my artwork and add another medium. I don’t like to work in just one medium.” It is in doing the graffiti work that he built on his natural propensity to move fast. “We’d do things just one shot. I have a very short attention span. I like to get things done fast.” 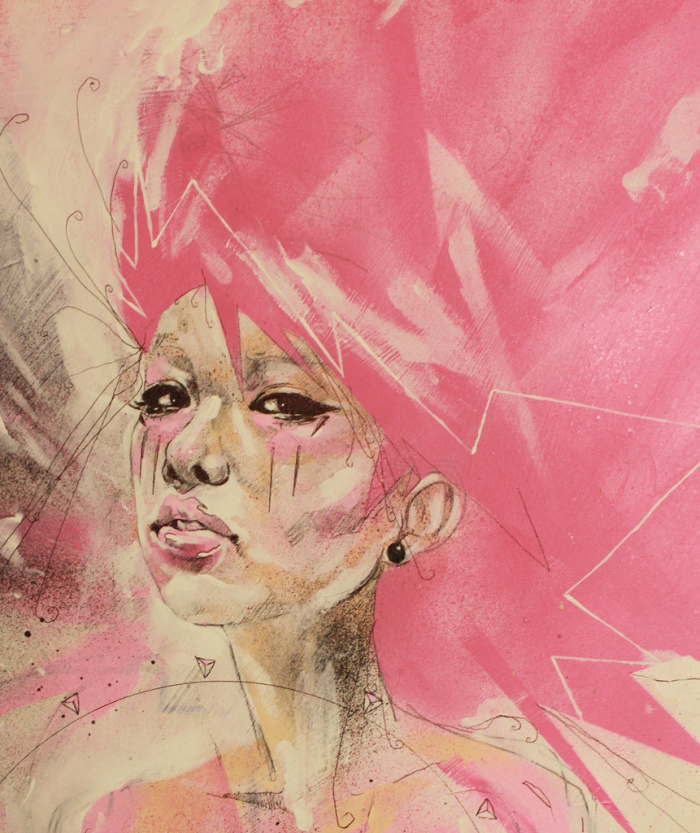 Since graduating, TERBYWONDER has always balanced work and art. Early on, he worked in a grocery store. These days, he is a carpenter and all-round building whiz, working for a small renovations company. “After work, I come home and paint for an hour or an hour and a half.”

TERBYWONDER is particularly known for his female muses. “I have been painting women since I was a teenager. Maybe, it was the adolescent in me and I carried on with it.” Now that he’s married, his wife finds herself featured as well.

The artist describes his style as “loose and erratic. I don’t really have a plan when I’m starting a piece. The music I’m listening to generally dictates how I’m feeling and where I’m going to go.” The music varies: it might be Diplo, trap music, three hour instrumental pieces. “I grew up listening to lots of hip-hop.”

When he was younger, TERBYWONDER was more focused on being refined, on seeking perfection in his art. “As I’ve gotten older, I’ve thrown caution to the wind.” A looser style is a common trait he also sees in artists he admires, such as Ashley Wood, David Choe and Kent Williams.

TERBYWONDER is inspired by the vitality of other cultures. “I just went to Tokyo with my wife for our honeymoon and that was awesome.” He has long been a fan of anime, Japanese movies and artists, such as Katsuya Terada. 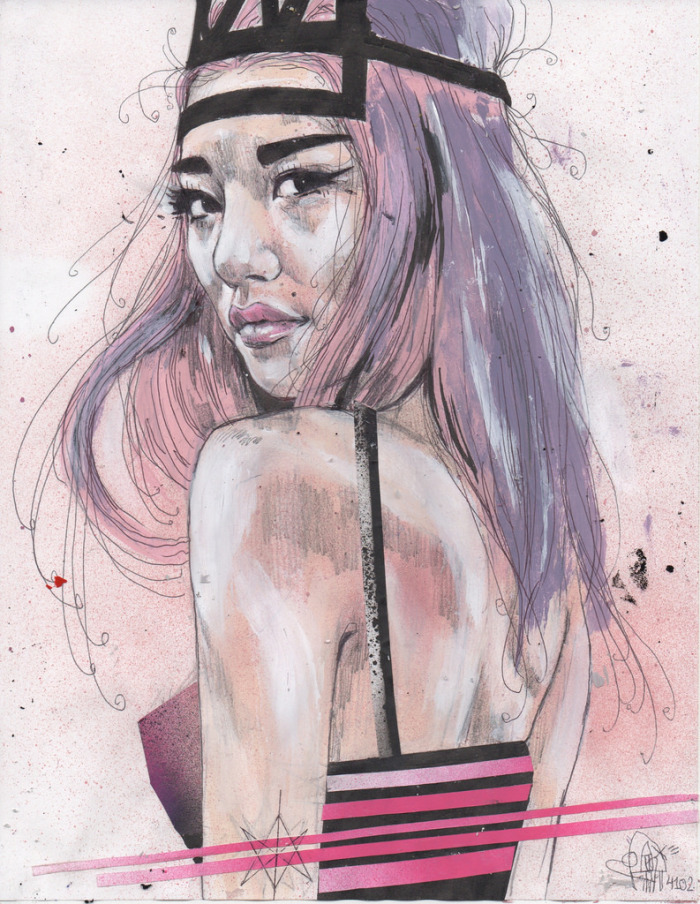 He is  situated in Burnaby, but TERBYWONDER has been able to build an international collector base through the Internet. “flickr. tumblr. instagram has been huge. I built a good following over the last couple of years. People contact me and ask if they can buy something they’ve seen, which is really nice.”

While he enjoys the reach and artist independence through the Internet, TERBYWONDER also appreciates being able to talk to viewers directly in gallery showings. “It’s one thing to see a message about your artwork online. It’s another thing to talk to someone who tells you directly how your art makes them feel.”

Come Christmas, TERBYWONDER proudly carries on the family tradition. He packs up the dollar store acrylic craft paints and hires himself out to paint Christmas windows. “Santa Claus, snowmen, little elves. My Dad is stoked; he’s the only reason I do it. He’s in his 70’s and he still does it too.” 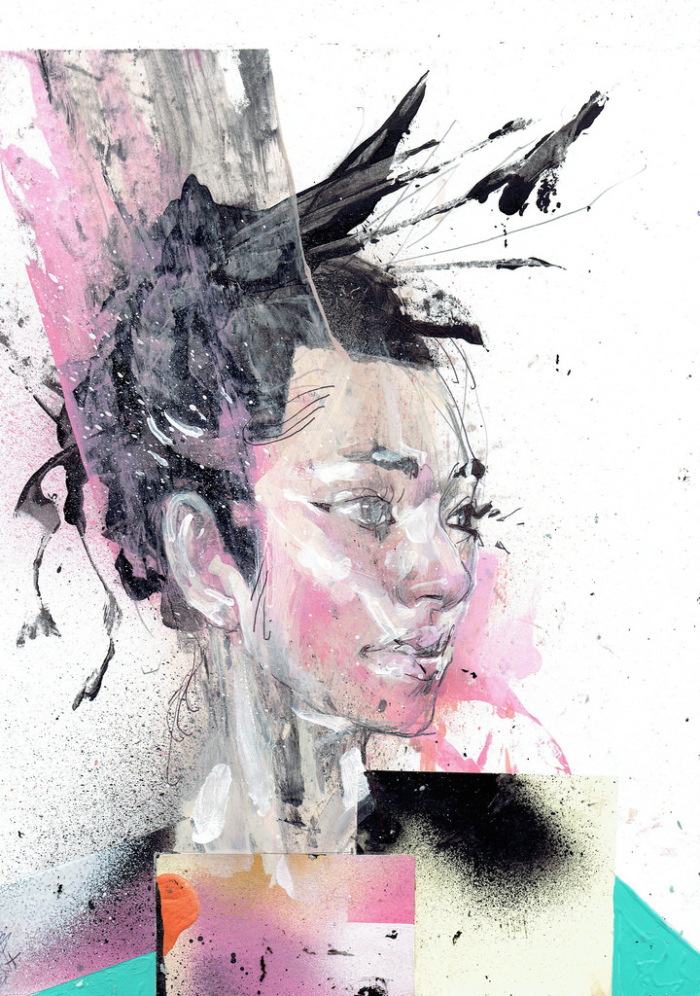