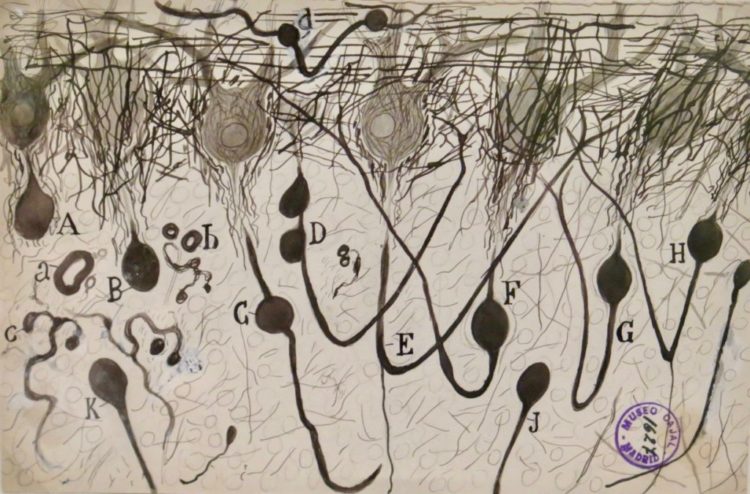 Santiago Ramón y Cajal started sketching the brain in the 1800s, yet his more than 3,000 drawings  are still in use today. This Nobel-prize winning ‘Father of Neuroscience’ was as much artist as scientist. From an early age, he showed the single-mindedness found in so many exceptional brains.

When birds caught Santiago’s fancy, he set out to find more nests, eggs and birds than anyone thought possible. When his interest turned to chess, he set to juggling a record-number of simultaneous games. The young Cajal spent day after day wandering outside and sketching what he saw,  ‘with an irresistible mania for scribbling.’ As a teen, he fed his passion for drawing by chewing through classes at the Academy of Arts in Huesca, Spain.

After graduating from medical school in Zaragoza, being dispatched by the army to Cuba, and getting malaria, Cajal returned home to Zaragoza and an academic assistant’s position in histology. As he quickly worked his way up to a Chair of Anatomy position in Valencia, Cajal became fascinated with stained nerve cell slices under the microscope. 1888, he wrote, was ‘my greatest year, my year of fortune. Realizing that I had discovered a rich field, I proceed to take advantage of it, dedicating myself to work, no longer merely with earnestness, but with a fury.’

Cajal worked into the night, staring at the micro-anatomy of healthy and injured brain slices. His beautifully detailed work revealed that the brain was composed of a network of individual neurons – dendrites, axons, synapses. In our header photo, we see Cajal’s drawing of axons of Purkinje neurons in the cerebellum of a drowned man. This is one of 80 of the drawings on exhibit at the Morris and Helen Belkin Art Gallery until December 3, 2017. 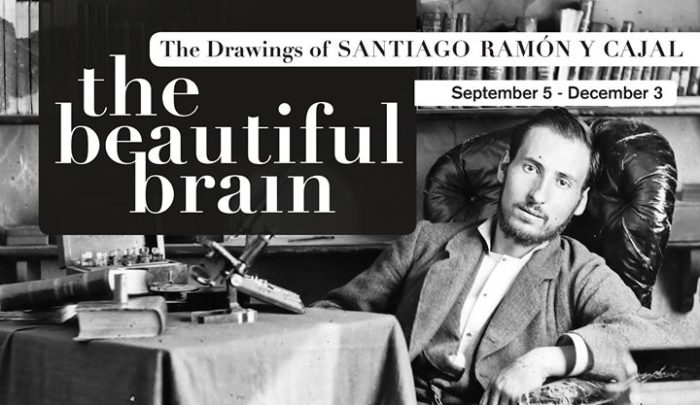 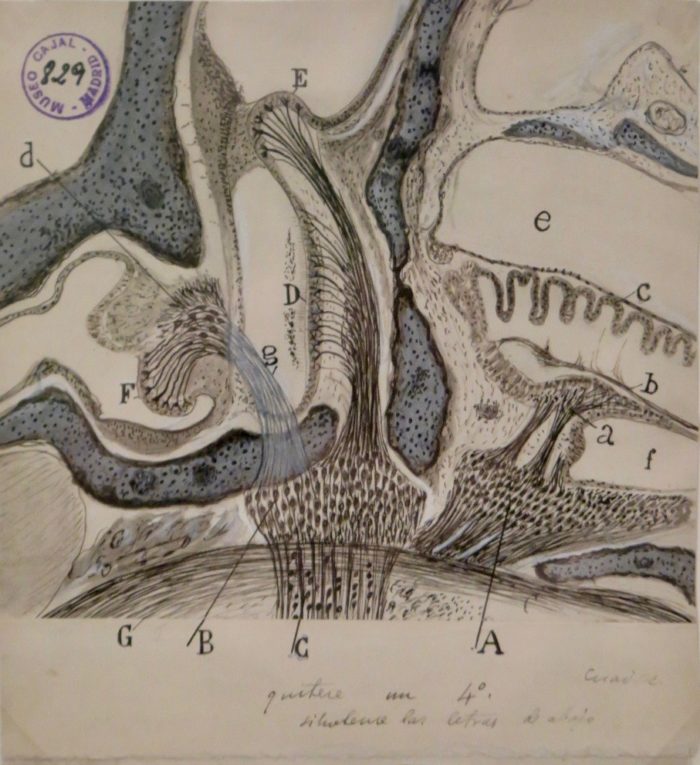 injured axons of pyramidal neurons in the cerebral cortex.1914 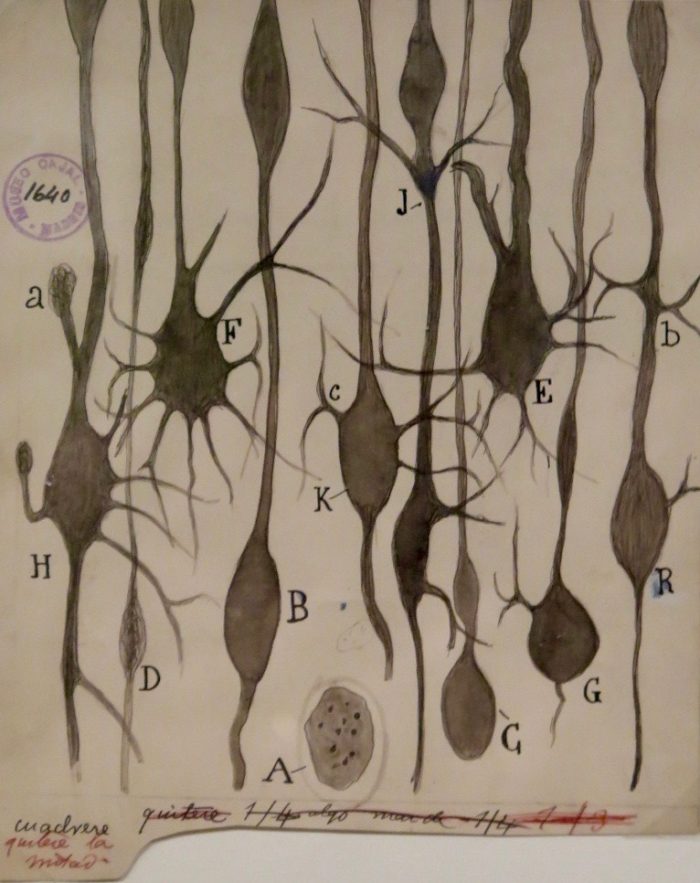 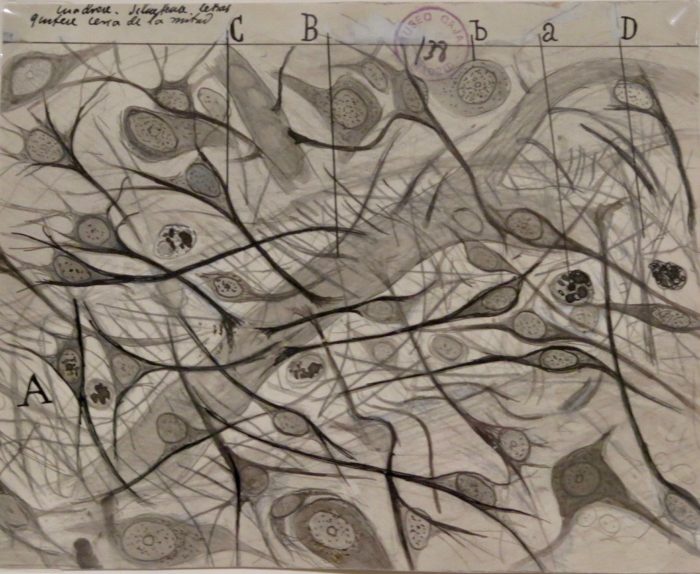 ‘The cerebral cortex,’ Cajal said, ‘is similar to a garden filled with innumerable trees, the pyramidal cells, which can multiply their branches thanks to intelligent cultivation, send their roots deeper and produce more exquisite flowers and fruits every day.’

neurons in the superior cervical ganglion 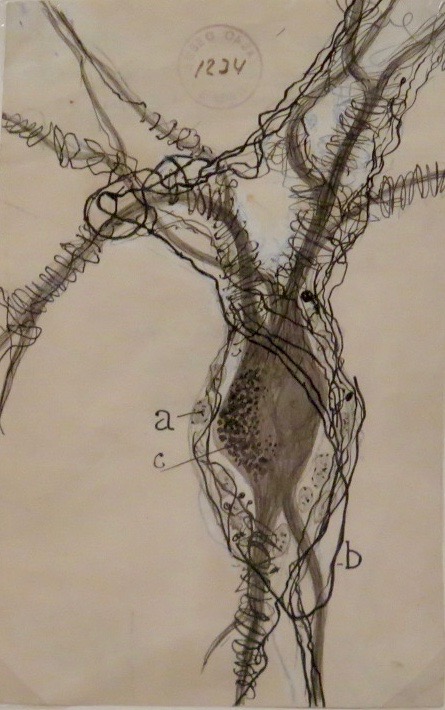 neurons in the superior cervical ganglion 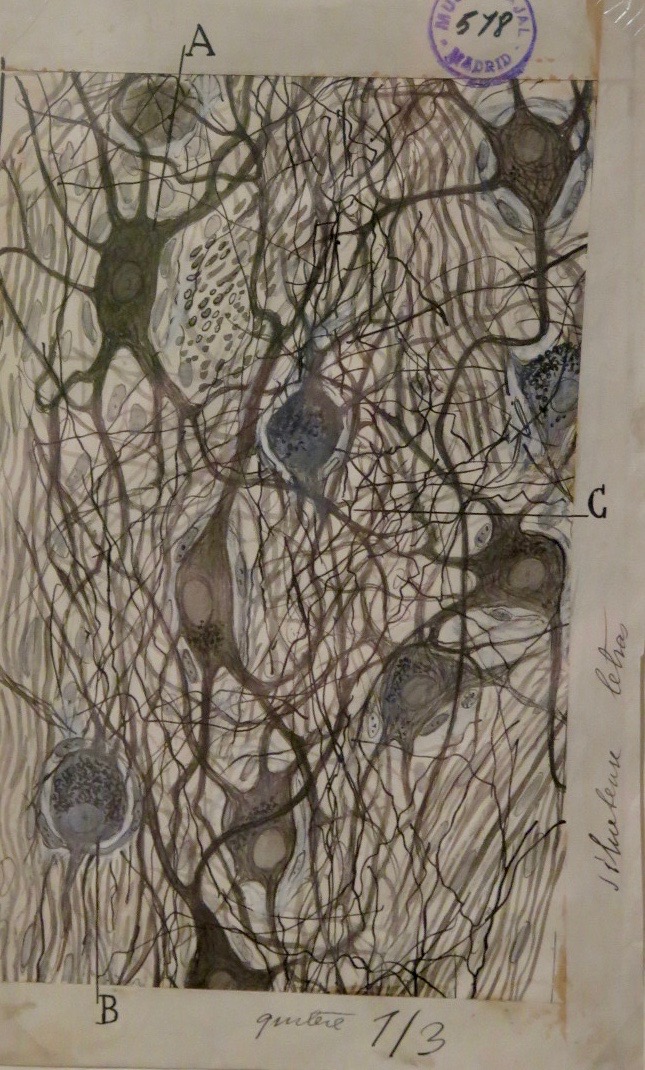 synaptic contacts in the cerebellum. 1935 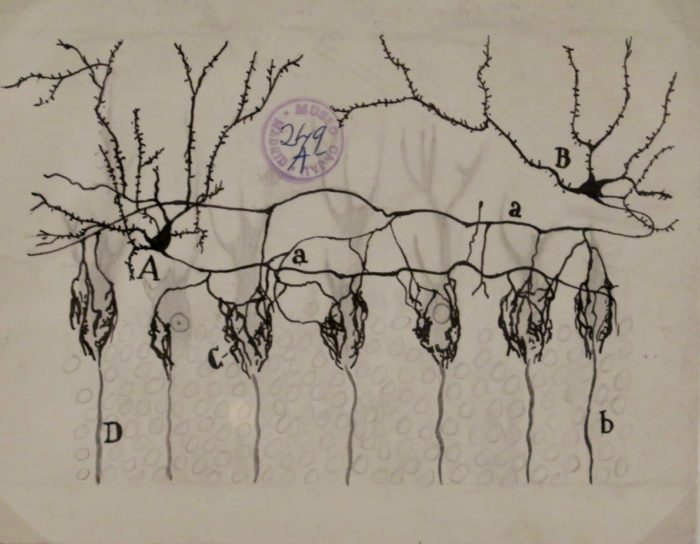 A Purkinje neuron from the human cerebellum. 1899 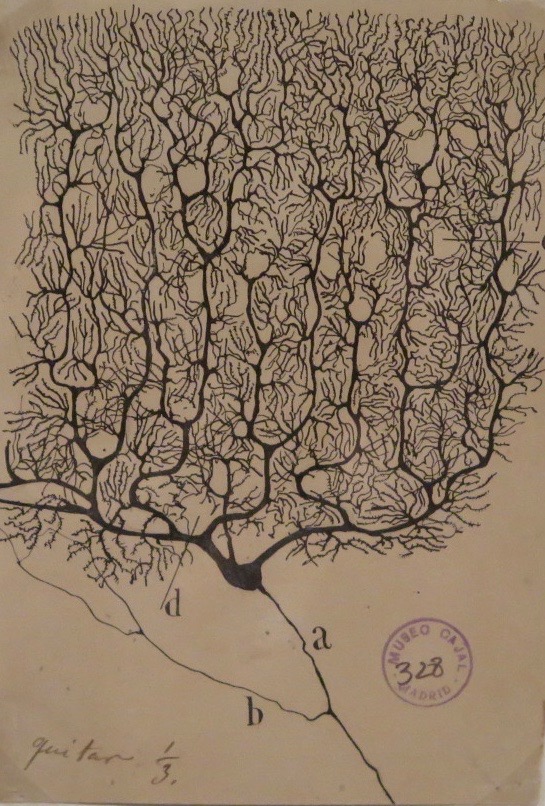 growth cords in the spinal cord of a chicken embryo. 1902 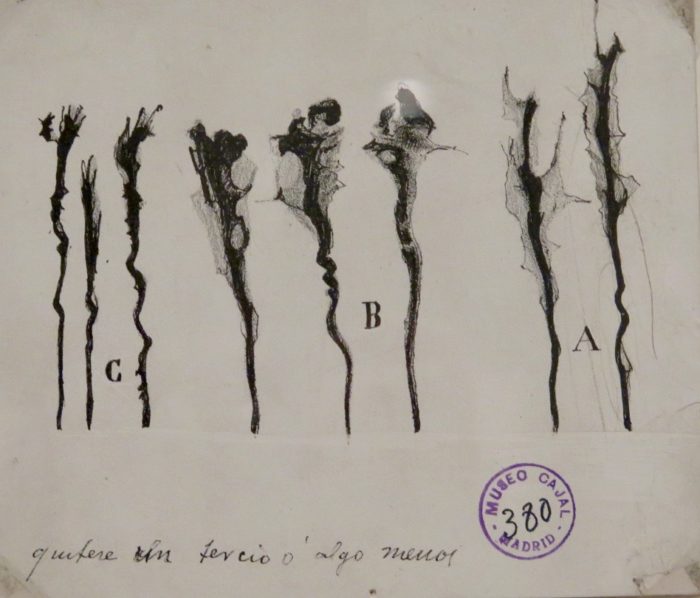 injured Purkinje neurons of the cerebellum. 1914 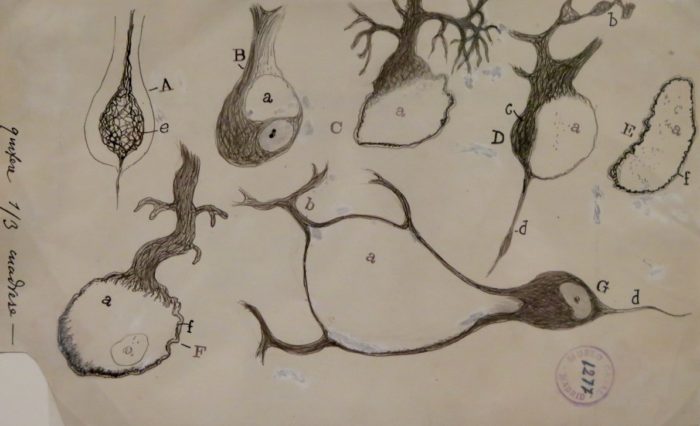 ‘Judging from this drawing, Cajal must have had a droll sense of humor…Large vacuoles are present in several cells, a sure indication of degeneration. The most swollen of these cells (G) has the appearance of a penguin, swimming among the other neurons. Did Cajal actually see a penguin as he gazed into the microscope? Hard to tell, as Cajal typically drew from memory rather than tracing specific cells that he saw.’

calyces of Held in the nucleus of the trapezoid body. 1934 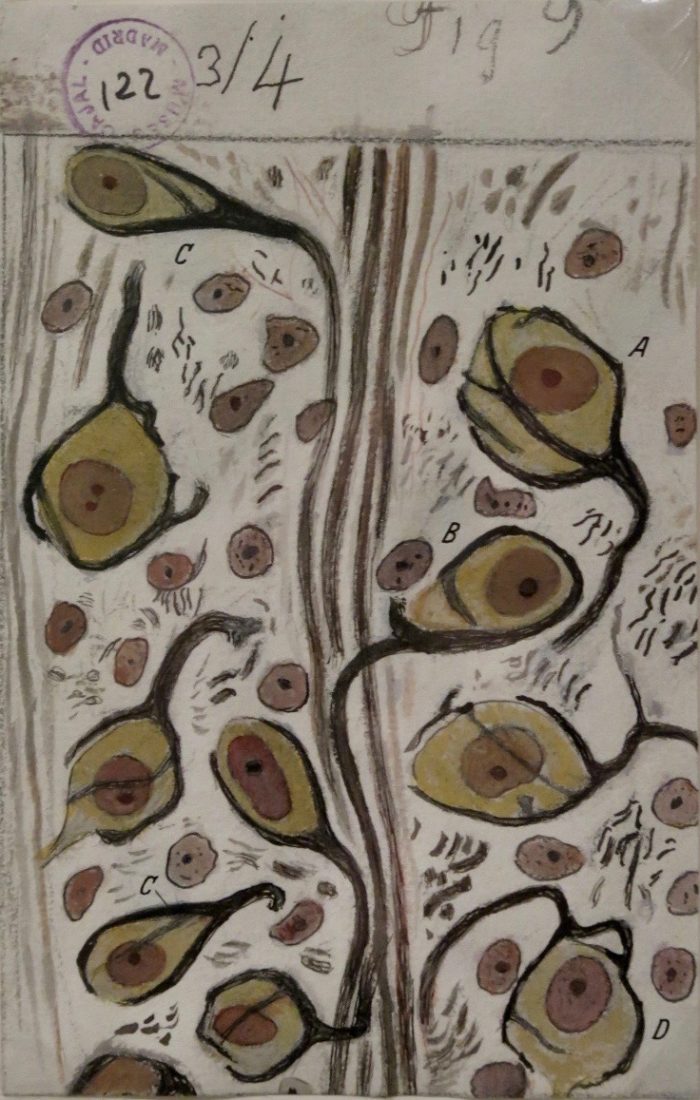 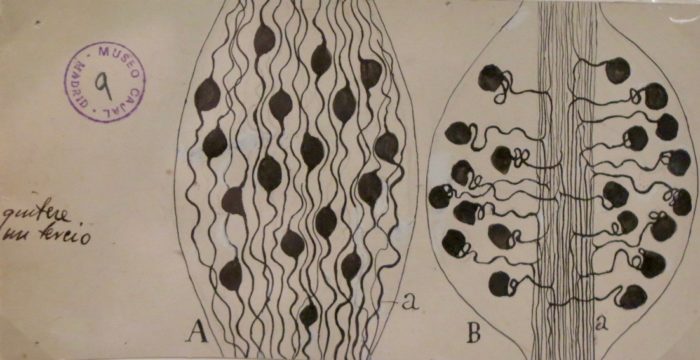 ventral surface of the medulla and pons in the human brain. 1933 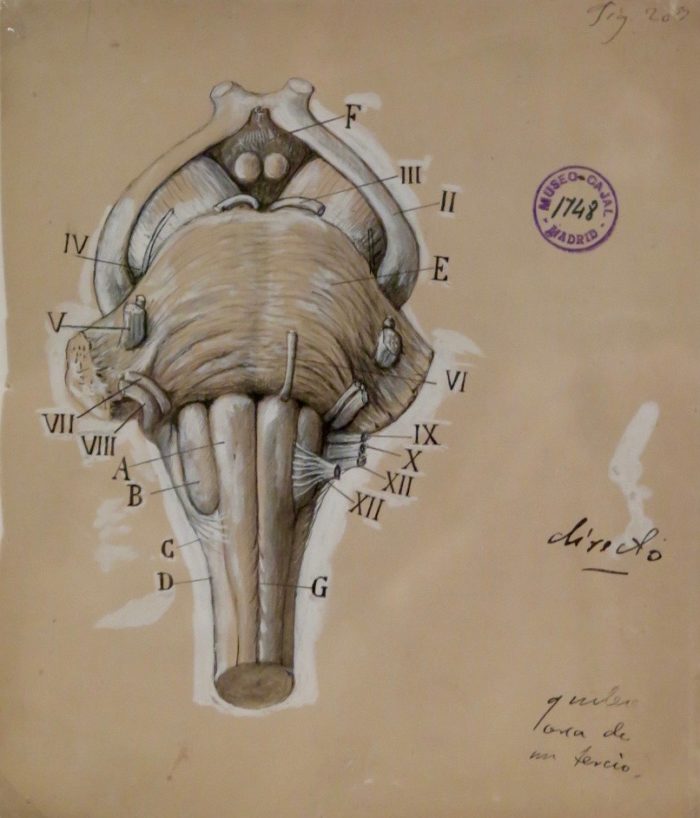