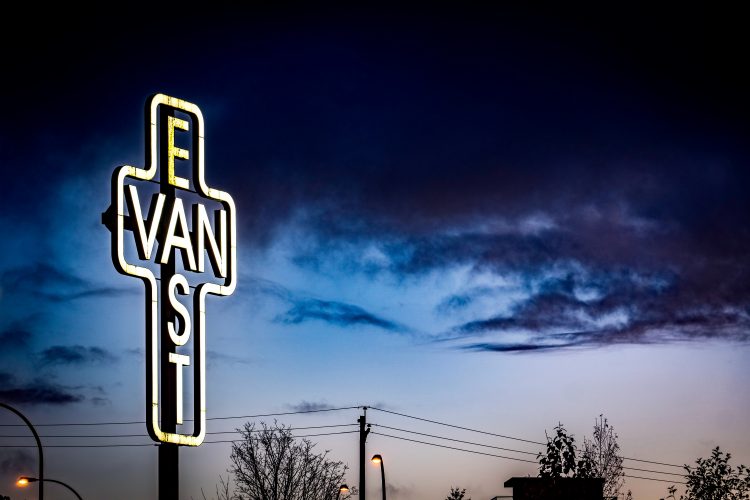 From how many Vancouver viewpoints have you seen the East Van sign? Perhaps your normal commute takes you by and by the sign all week.

Created by renowned Vancouver artist Ken Lum – and formally titled ‘Monument for East Vancouver’ – this 57 foot sculpture is designed with concrete, steel, aluminum, impact modified acrylic, and LED Illumination. Commissioned for the 2010 Olympic and Paralympic Public Art Program, the sculpture was designed by Lum to be ‘an expression of hope and defiance’.

Lum didn’t invent this iconography. For decades, artists and proud residents have emblazoned the East Van sign where they could – on clothing, in graffiti . ‘East Van’ is sometimes capped off with a: ‘Rules!’ Ken Lum placed the sign in a then neglected parking lot at Clark Drive and East Sixth – ‘a visually messy and peripheral site’-  to stare down the downtown core and, in so doing, challenge its historic power.

In his Artist’s Statement, Lum writes: ‘It is a symbol that has circulated in largely provisional terms. My idea was to formalize the symbol through scale and permanence. Although its precise origins are not known, the symbol does date back to at least the late 1940s (according to the memory of some senior citizens), which is the beginning of the post 2nd World War period. Its roots may be linked to the Catholic inscription of East Vancouver culture at that time, home as it was to many Italians, Greeks and Eastern Europeans.’

‘Over the years,’ Lum continues, ‘the symbol has been adopted as an emblem for East Vancouver as a whole but its appearance has generally been tentative rather than overt. The lack of overtness is, I feel, symptomatic of the underlying meanings that the symbol expresses. These meanings have to do with problems of injustice, inequality, subjugation and the trauma of poverty and acculturation, particularly as it relates to immigrant life.’

Here’s artist Ken Lum talking about ‘Monument for East Vancouver’ in a Vancouver is Awesome video. We also hear from Alpha Neon who fabricated the sculpture.