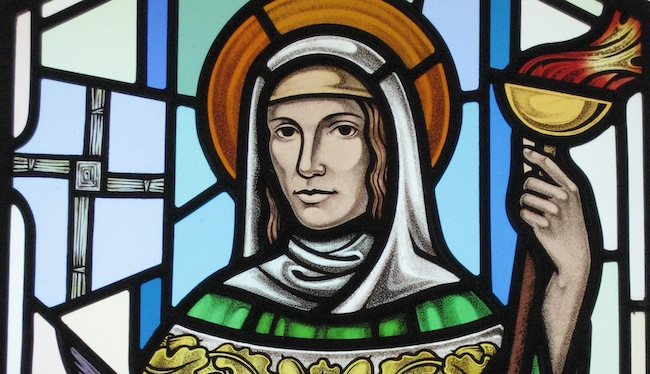 If you are sitting in the pews of St. Mary’s Kerrisdale, you cannot help but be struck by the stained glass windows that encircle you. When the sun is courteous enough to appear, its light shines through the brilliant cuts of purple, red, green and gold.

As expected, some of this stained glass artistry can be traced right back to England – the 1940’s to 1950’s, from the studio G. Maille of Canterbury. Yet, thirteen, soon to be fifteen, of the most striking windows at St. Mary’s were created by Laura and John Gilroy – internationally respected stained glass artists who have been working on a quiet street in Vancouver since 2005.

Laura and John apprenticed for six years at the James, Clark & Eaton studio in Bristol. They were, in fact, the last artists trained there before the studio closed. “It was the oldest stained glass studio in England when we joined,” says Laura. This was an old school apprenticeship with rigorous training, crusty, talented mentors and strict client deadlines. If you couldn’t hack it, you were out. If you proved yourself at the lowest rungs, you might be trusted with slightly more difficult work.

Ever so often, the Chief Designer would wander up to the busy apprentices. “Are you happy with that?” he would ask. Whether the answer was ‘yes’ or ‘no,’ he would do the same thing. He would take out his mahl stick, slash it through the painting and command his charges to start again. “Years later,” John says. “He said there was nothing wrong with the painting. It was to get you to take criticism and to be self-critical.”

Apprentices had to learn the engineering and science of stained glass windows: how many support bars do you need over how many feet? What will this window require to withstand the elements – wind, rain, snow, heat? How best to capture the light?

They also had to be able to both restore and recreate historical works. “By the end of the apprenticeship,” says John, “we had to repaint a 150 year old head of Christ. They would put them side by side – your work and the original – and the two had to match brush stroke for brush stroke.” To do this matching properly, John explains, you need to do glass forensics. What kind of binders did the original artist mix in his paint? What kind of brushes did he use, how many times was the glass fired, and was the artist left or right-handed?

Laura pulls out a similar recreation that she did for an architectural exhibit in BC. The cracked original is an angel figure from a Classic Victorian window about 150 years old. 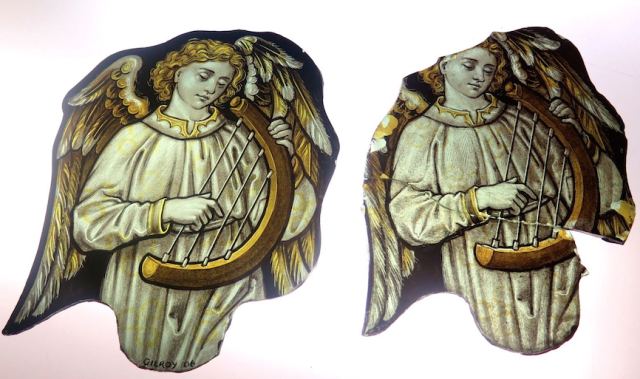 The Nova-Scotia born Laura and Belfast-born John toiled through training, got married and worked for years in Britain. Laura earned the rare honour of being elected Associate of the British Society of Master Glass Painters in 2000 for her design work – a title that can only be awarded to the designer of the studio.

“The work was never well-paid and incredibly difficult,” says John. “My mates doing office jobs were getting paid three times the wage. But, you get a passion for it. You either get pulled in or drop out really quickly.” “You’re using really high fine art skills,” adds Laura, “but with a practical application.”

John was recruited to do some work on California churches and, whilst exploring the West Coast, was entranced by Vancouver. “We had this stupidly mad idea: why don’t we start from scratch in Vancouver? Everyone will be head over heels to work with us. Total nonsense. Nobody cared. We had to be so much better to get established.”

Their first local work was window restoration in the Coastal Church on West Georgia. “By the Shangri-La, which was a hole in the ground at the time.”

When they were invited out to St. Mary’s to do their first window there – St. Brigid, excerpted above – they immediately recognized the artist behind the church’s “wonderful Last Supper window.” It was Ronnie Paige who had trained with one of the Gilroy’s key mentors. “Roy said that Ronnie was one of the best artists he ever knew. You could tell he loved doing that window. The figures are brilliant. The way he gets your eye to move around.”

At St. Mary’s, the Gilroys had a great supporter in the Reverend Kevin Dixon, who would roar down to their studio on his Harley to see how the work was going. Laura and John always work closely with clients, be it families dedicating windows in churches or homeowners bringing stained glass windows into special areas of their houses. Together, the husband and wife duo can see how best to bring together what the client wants and what works artistically, historically and structurally at the desired location. 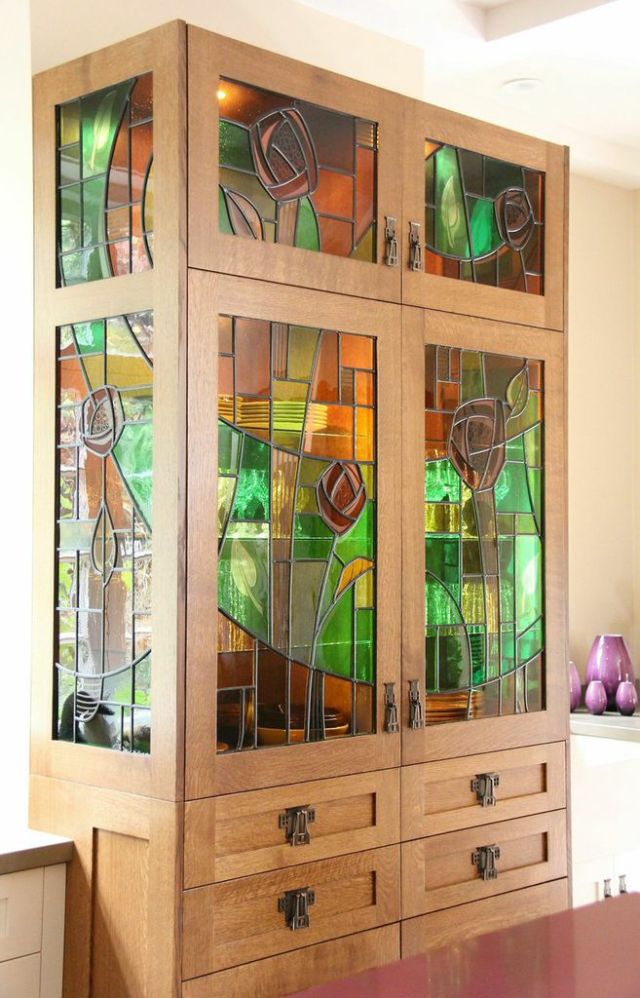 When creating windows, John and Laura have areas in which they overlap and areas in which the one or the other will take the lead. “We go off in separate directions in terms of what we are thinking of achieving, “ says Laura, “then we come back and find the point where we meet. That works well. The combination provides the special quality.”

Their materials – oxides, pigments, powdered glass – are carefully sourced. “The glass we use is mouth-blown and imported from Europe, because the colour range and quality is huge.”

Laura will do the early sketches, watercolours and full sized cartoons in pencil and Indian ink. “You have to scale up by hand or by eye,” says Laura, “not computer.” Once that is approved, they move onto the cutline – a structural design showing exact glass shapes, colours and location of support bars and divisions. “Then,” John pipes in, “one of us cuts the glass with a diamond-tipped, oil-filled cutter from Japan. It’s all hand tools.”

Next comes the first stage of glass painting, which is tracing, followed by the tonal painting. “Both of us do that,” says Laura. “Usually John does the facial features. He has a particular talent for expression.”

“In stained glass” explains John, “you work in the negative. You take paint off to create your semitones, your highlights. You very delicately tap the paint with the brush and it starts to come off…Faces and hands are really difficult, so you do that with a needle.”

The needle John uses is jammed into an old paint brush handle passed onto him by the widow of James Crombie “who taught us. He was the best artist we knew. I really love the feel of this one.” “I use his easel at home,” adds Laura.

Once the tonal painting is approved, it is time for disassembling it to fire each individual piece of glass in the kiln at around 700º C, thereby fusing the paint into the glass.

Next step in this tremendously complex process is fitting all the pieces back together again using H section lead cames, cleaning and soldering every joint before cementing the window with a special mixture that includes turpentine and linseed oil. “Love that smell,” says John. Once it is all cured, the Gilroys must pick off the excess and do a final polishing that turns the lead black and prevents oxidation.

Finally, it’s fingers crossed, up the ladder and installation.

And just how long does it take to get through all of the necessary steps? “Too bloody long,” says John. “I gave up counting hours years ago.”

One never knows what the next request will be. At one turn, they are taking on a massive project in Dubai. At the next, they are building a Severus Snape-inspired window in Massachusetts. “The client had been looking for three years. She didn’t want him to look like Alan Rickman. More inspired by the books, in a Byronesque style.”

Their Vermeer window can now be seen on Fourth Avenue in Kits. It is an homage to Vermeer’s painting The Glass of Wine. “The original is a seduction scene and she’s drunk. We moved the glass away from her face and made him look a little less lecherous.”

“There is something about every project. We are proud of every project,” says Laura. And where do they see themselves in the future? “People like us don’t retire,” says John. “All the guys we know are in their mid 80s and still painting.”