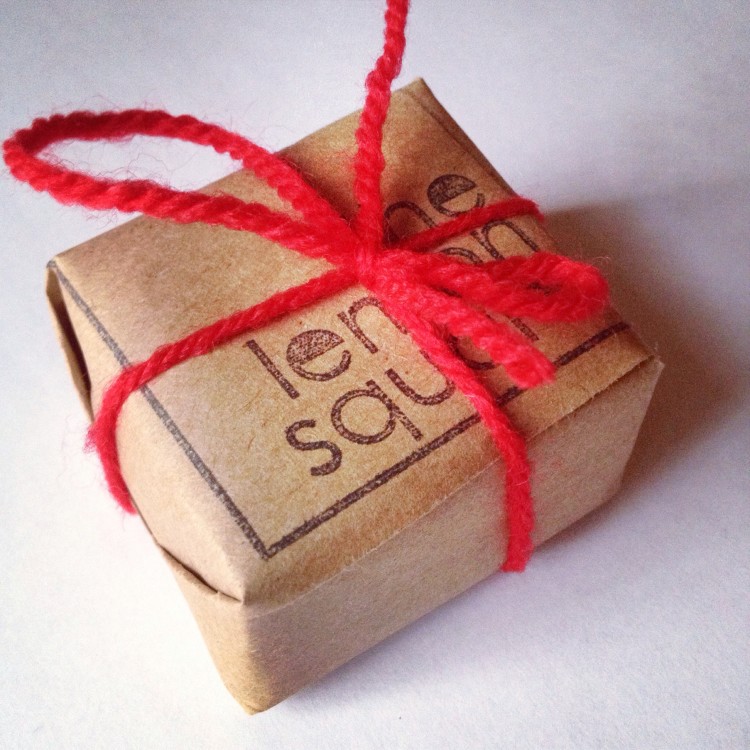 Here in Canada, we love our lemon squares. We are lemon sweet searching like mad and Google forecasts that our obsession will continue. 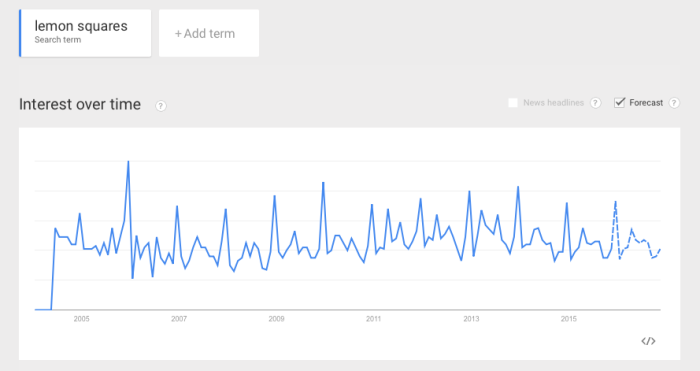 If you are looking for the quintessential lemon square, you have come to the right city. Chef Dan Spratling and Wally Mitchell run a popular Vancouver business whose name tells you everything you need to know: The Lemon Square.

Lemon squares are the one product that they make, and a lot of time and tweaking went into perfecting the recipe. “It’s lemon coconut on a graham crumb base,” says Mitchell. “Since we use the whole lemon – the juice and the zest – it has a really lemony taste. The coconut gives it a chewy texture and it has a lemon butter cream frosting. It’s fun on the palate.” 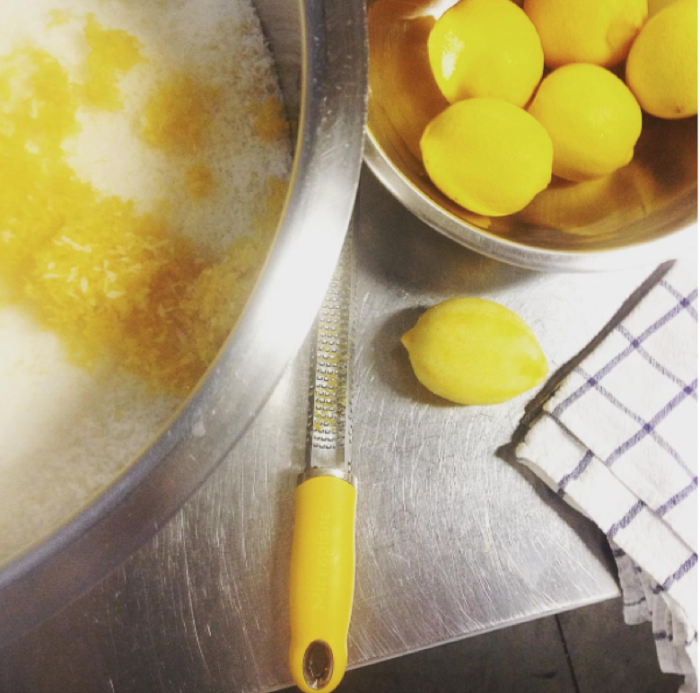 Palates are lining up at markets and cafes to get their Lemon Square fix. It’s a recipe that has its roots in Dan’s childhood in Australia. “I have to give credit to my Mum or she will kill me!” Dan grew up working at his Mother’s café after school and on weekends.

Mum’s lemon slice recipe was a hit at home so Dan – who trained as a chef in Melbourne – had to think twice before putting his own spin on it. After testing various versions, Dan brought his 2.0 lemon squares to Christmas in Chilliwack with Wally’s family. Chilliwack raved, word got out and soon friends were asking for squares and more squares. “Everyone was saying that they were delicious,” says Wally, “and that we should sell them.”

So, two years ago, Spratling and Mitchell decided to give the lemon square business a try. They set up at the Vancouver Baker’s Market at 60th and Fraser. “Why not give it a go? We made a couple of trays and instantly it was one of the big sellers. We were pleasantly surprised.” 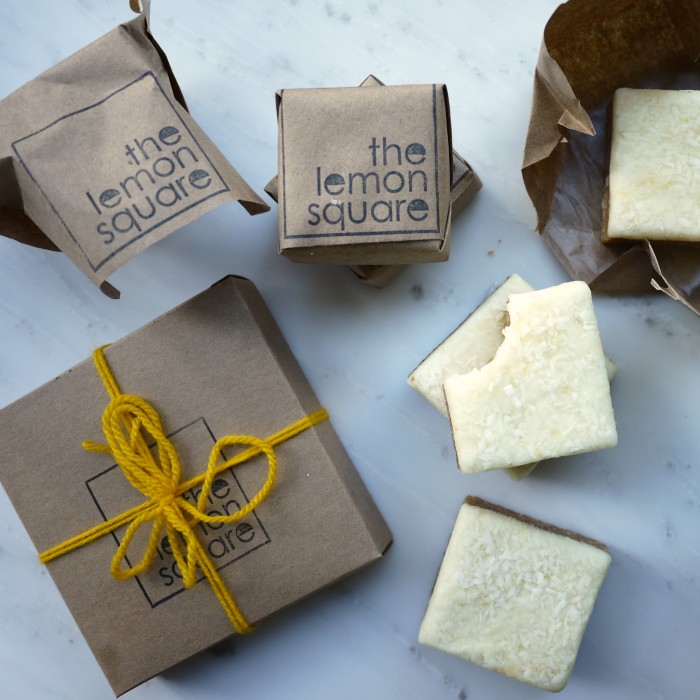 They got their signature packaging down early. “We liked the craft paper look. Something simple.” The Lemon Square offered a traditionally sized treat and a Mini Share pack. “They are 4 squares cut into 16 mini-pieces. You can break one off.”

In moving from market to market, Dan and Wally met fellow artisans who were venturing out with their own food and crafts. “We met some really fun people. It’s a great community,” says Wally. “The community that we have met along the way would be the most valuable and rewarding part of the journey so far,” says Dan. “We love it.”

The Lemon Squares were originally baked in Dan and Wally’s home kitchen. “But, we quickly realized, for sanity’s sake, that we had to move the business out of the house.” A professional space was also required in order to sell to cafes. “You have to go through Food Safe, proper licensing and you have to submit a Food Safety plan. The learning curve is steep.”

“One of the harder things to find in Vancouver is production space,” says Wally, “but we found a great kitchen on Industrial Avenue.” The Lemon Square Guys share it with other local businesses who make Kombucha tea, grilled cheese, Jamaica Blue Cold Brew Coffee, pie and “amazing beet dip.” 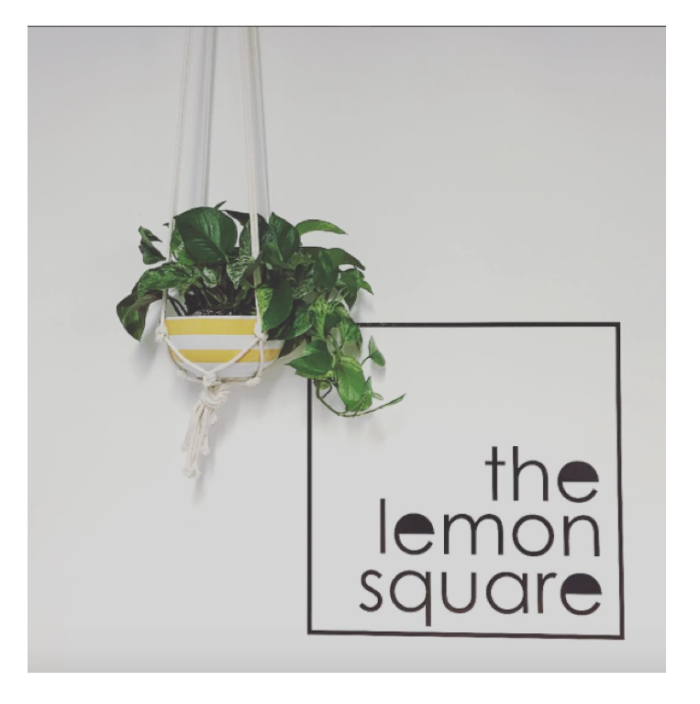 Dan and Wally source most of their lemons from California or Australia. “Lemon prices have been fluctuating so much lately because of the drought. It would be great if we could source lemons locally.” They are looking into a Vancouver Island farmer who has found a way to grow juicy lemons in our less than citrus-friendly climate.

Mitchell and Spratling still remember “jumping for joy” when they got into their first retail space. “Café Bica at 2nd and Fir. Rose Cunningham is the owner/manager. She is absolutely amazing. We are still there.” Now, The Lemon Square is in over 15 Vancouver retail spaces. “This weekend, we are starting at Camp Lifestyle + Coffee Co, our first cafe in Whistler.”

As Wally and Dan prepare for more holiday events – Got Craft, their own Open House – friends and family chip in to help. After all, Wally has a second Full-Time job as an Advisor/Recruiter for the Bachelor of Commerce Program at UBC’s Sauder School of Business. Wally’s parents Louise and Wally Sr. are thrilled to help out when they can. “They live out in Chilliwack. They usually come down once a week and help us a lot. They do a lot of markets for us. They are both really chatty.”

In the future, The Lemon Square Guys could imagine opening up their own, small retail space, though they wouldn’t want to compete with their partner cafes. “It would be great to support the local vendor community, to bring in people like East Van Jam or the Salty Cookie Company.”

They have already created a product with Rain or Shine Homemade Ice Cream. “They made a lemon ice cream with pieces of our squares in it. It was great.” 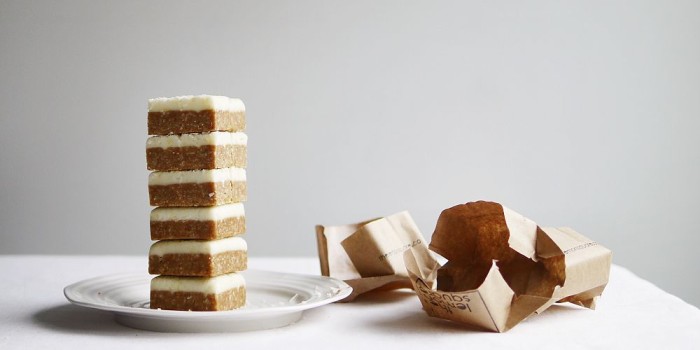 What advice do Wally and Dan have for other artisan food entrepreneurs?

1. Pick something and go for it
“We didn’t have a traditional business plan. We jotted down a bunch of ideas.”

2. Network with others doing the same thing
“They are usually more than happy to talk to you about their experiences.”

3. Mind your packaging
“Keep it simple. Get real opinions from family and friends.”

4. Focus
“We really wanted to focus on one product and do it well, at least at the start. One thing we notice: when we go to markets, we are in and out of there fairly quickly.”

5. Give back
“We try and give donations for charity events. It feels good to help out and people get to know you.”

6. Savor your successes
“I feel extremely lucky that we have been able to create our own product and start our own company. Working for yourself can be very challenging, however well worth it.”

* Photos courtesy of The Lemon Square