A Whirl Of Words A whirl of words. It’s what we imagine when we look at Vancouver artist Andre Petterson’s striking series of mixed media typewriter pieces. A whirl of words is also the concept behind the new book of Jonathan Berkowitz – CBC Radio’s ‘Word Guy’, author, puzzler, statistician, professor.

We would rave, but we’ll leave that to Will Shortz – New York Times’ Crossword Editor, and NPR’s Puzzlemaster. Shortz writes: ‘The Whirl of Words is one of the most interesting books I’ve seen recently. It combines narrative on wordplay with many wide-ranging puzzles to solve. It’s unusual, well-written, and witty. I recommend it!’

We were delighted to talk to Jonathan about his wonderful new book: 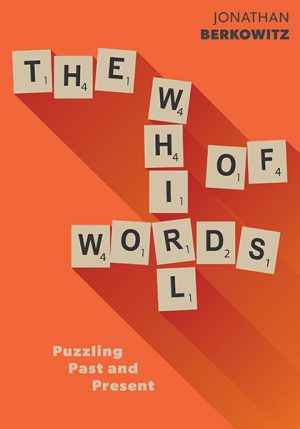 i. What is a Whirl of Words?
It is a joyful exploration of all the fun playing with the English language. A “whirl” is a busy or fast-paced succession of events, also called a “bustle.” The past tense is “whirled,” which is a homophone for “world.” This book is a tour through the world of words!

ii. What are four words you would use to describe this wonderful new book you have written?
Entertaining
Stimulating.
Educational
Intriguing

iii. Why this book now?
It has not been written previously. It is unusual in combining stories and puzzles and has been percolating inside me for some years. I had time during the pandemic to complete it. v. You dedicate The Whirl of Words to your mother, the person who introduced you to puzzles as a child. What did she think of your lifelong commitment to puzzling?
From my infancy onward, my late mother nurtured my unusual skill set and encouraged activities that developed the brain. She would have loved the book and probably would have asked me why I waited so long to write it!

vi. Chapter 5 is entitled ‘The Mind of a Puzzle Solver’. What are a couple of things you have learned that define those who are entranced by puzzles?
Puzzle-solving requires pattern recognition. That skill is needed for success in all parts of life, professional and personal.

Puzzle-solving develops an openness and curiosity to see what’s below the surface and behind the obvious. The world is full of beauty; one simply needs to look for it.

vii. What are three of your favourite words? Why those?
I love MANY words, here are three that appeal, each for a different reason.

Googol—A huge number, 10 to the 100th power, written as 1 followed by one hundred 0’s. The name was suggested by the nine-year nephew of mathematician Edward Kasner. Kids think up far better words than adults! (The same boy also coined googolplex, 1 with a googol 0’s.) The ubiquitous search engine Google’s name is actually a spelling mistake.

Ambidextrous—Etymologically, the word means “having two right hands,” which is a bit different from what it means now. Puzzlers will observe that the first six letters come from the first half (or left side) of the alphabet (A to M); the last six letters come from the second half (or right side) of the alphabet (N to Z). It is truly an ambidextrous word!

Chocolate—What’s not to love about that word?!

If you asked for a fourth one it would be Truffle–it sounds beautiful and tastes even better, whether it refers to the chocolate kind or to the savoury kind.

viii. What is one word you just cannot stand? Why not?
Every word is interesting in its own way, and each has a story, so I love all words. What I cannot stand is when people use them incorrectly! ix. Chapter 6 includes Codes, Ciphers, and Cryptograms. Is there any situation where your own aptitude with such things helped you solve a real-life mystery or conundrum?
We have all been puzzled and plagued by strange changes in text messages made by Auto-Correct. I am good at deducing the intended message.

From my knowledge of English word origins and structure, I can make reasonable guesses at the meanings of words in other Indo-European languages, especially Romance and Germanic ones.

My profession of statistics is about making generalizations from partial information. I can also do this with words; with scraps of messages or letters I have been able to restore the intended complete message.

x. Continuing with the detective line. You have an incriminating typed letter and 6 suspects. What are some word use and linguistic pattern clues you would look for to identify which of these 6 people wrote this incriminating letter?
Most people have relatively limited vocabularies and rely on a small set of words. Multi-syllabic words offer more nuance and suggest higher education and great literacy. I would look for misspellings and use and misuse of idioms (is English the suspect’s mother tongue? Use of slang and dialect can suggest geographic origins. Spellings can distinguish between American, Canadian, and British English: color or colour, centre or center, organize or organize, judgment or judgement. Other clues: sentence length; use of tenses; use of prepositions.

xi. Despite all of your deep knowledge, what is one important new thing you learned about words and puzzles in writing the book? How has that changed your approach?
What a writer means and what a reader reads may not coincide. It takes time and effort to write clear instructions for a puzzle. That’s something that we can all embrace; when you ask a question that you intend to have answered, make sure it is well-defined, properly constructed, and unambiguous.

xii. Anything to add?
When people say they’ve just finished a workout, they almost certainly mean a physical workout. The brain is a “muscle” that also deserves training and fitness activities. Besides which, it’s fun! So, add mental workouts to your physical workouts. What’s the answer to your puzzle at Question #4?

A Whirl Of Words