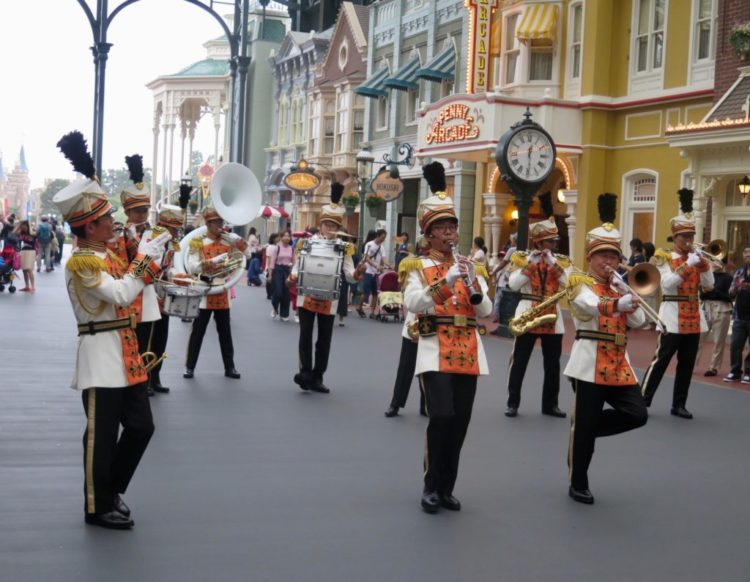 Tokyo is a fascinating mix of the past and the future – from ancient Buddhist temples to hotels staffed entirely by robots. With its special wards, prefectures, subprefectures and massive population, we short-term visitors cannot claim to understand Tokyo. We can wander, wide-eyed, through the vibrant sub-cultures, admiring the creative fashion, art and food and seeing what we can learn from the people we meet.

Tokyo Disney is one interesting place to consider Japanese culture. It looks like a hyper-real version of Anaheim Disney. It’s a Small World is closed for renovations right now, but there are Caribbean Pirates, Mark Twain Riverboats, spinning Alice Teacups, Flying Dumbos and Mountains Space and Splash. Disney Sea takes you around the world with its Venetian gondoliers paddling through a massive Mediterranean Harbour, not far from Cape Cod corner, the Arabian Coast, Mermaid Lagoon, Mysterious Island. 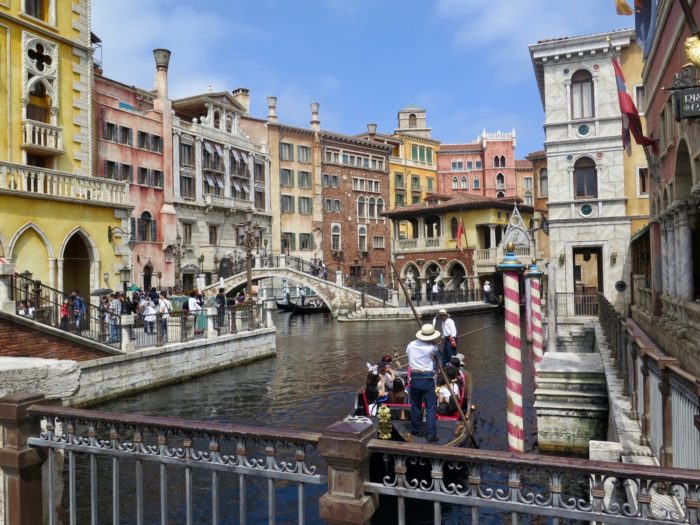 But, theme park norms and behaviours are different here in Tokyo. People are in huge lines, spiralling around each other – up and down stairs, over hills. Even on a searing hot day, these Disney visitors are huddled quietly under umbrellas, waiting for rides – no stamping feet, no family meltdowns.

When a marching band starts in on Beauty and the Beast, the precision and musicality of their playing is top notch. Boys, girls, businessmen and grannies are singing and clapping in time. It may be mid-September in our pedestrian world, but in Tokyo Disney it’s Halloween. Thousands circle the Mediterranean Harbour while Malificent lords over the Villains World show. 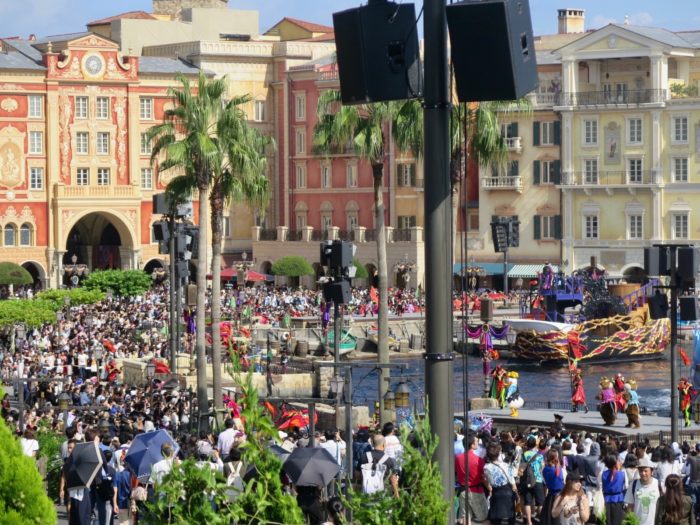 Most notable in the Tokyo experience are the visitor outfits. It’s not surprising to see kids dressed as their favourite characters. But now – only for this special ‘Halloween’ period –  adults are allowed to come in costume too. There are rules for the adult cosplay:

• Disney character costumes only
• No wearing of Tokyo Disney Resort Cast Member costumes
• ‘Guests are asked to refrain from wearing costumes that cover their face (including costume make-up, fake scars or injuries and beards), that include sharp, long or dangerous objects or parts, that make it difficult to walk or that are overly revealing.’ 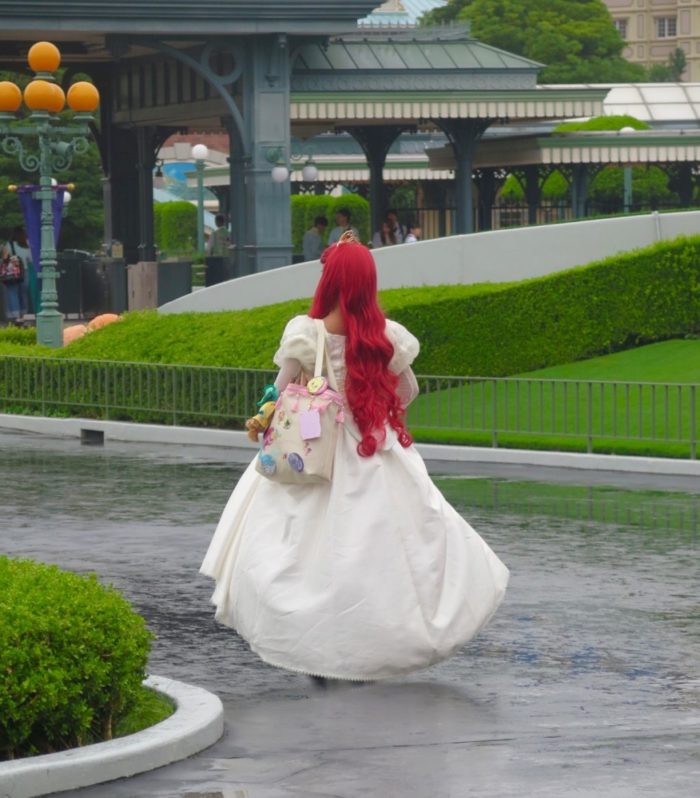 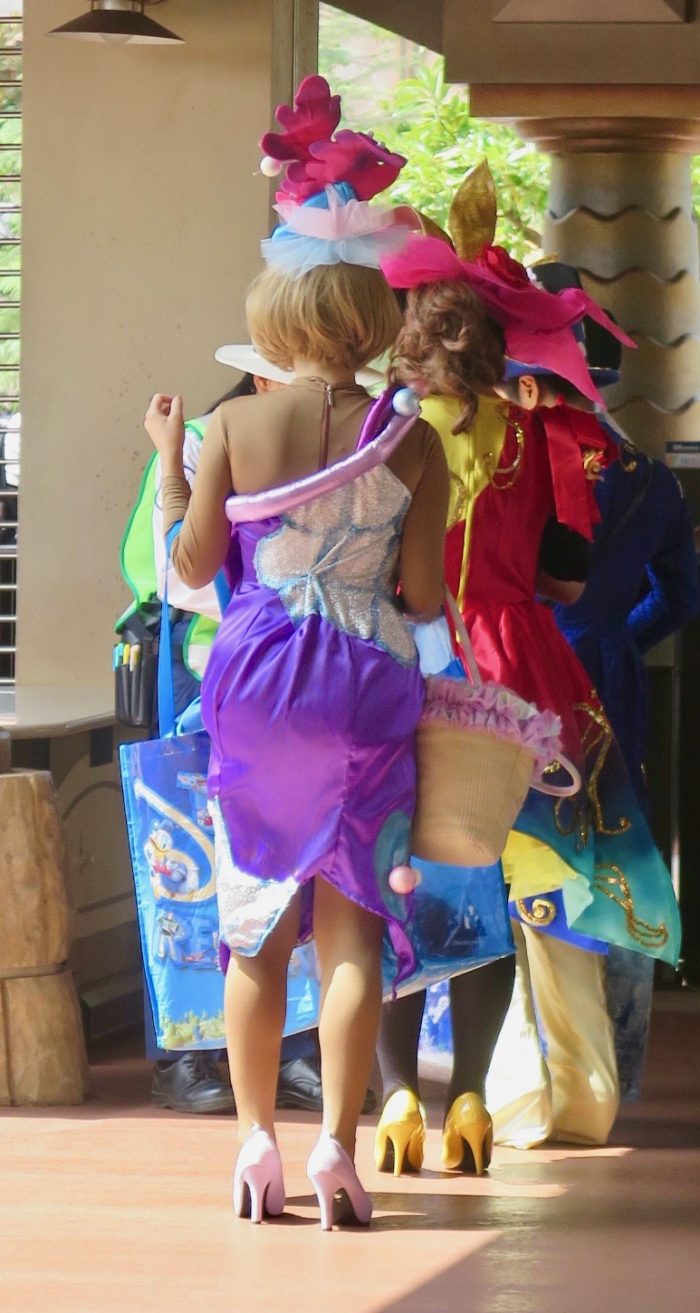 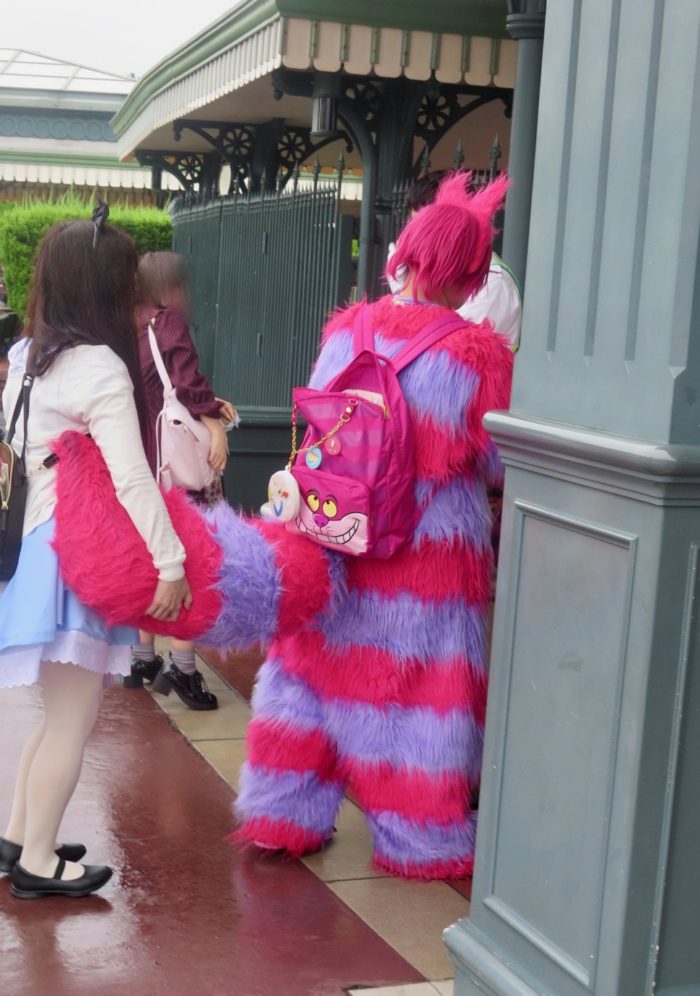 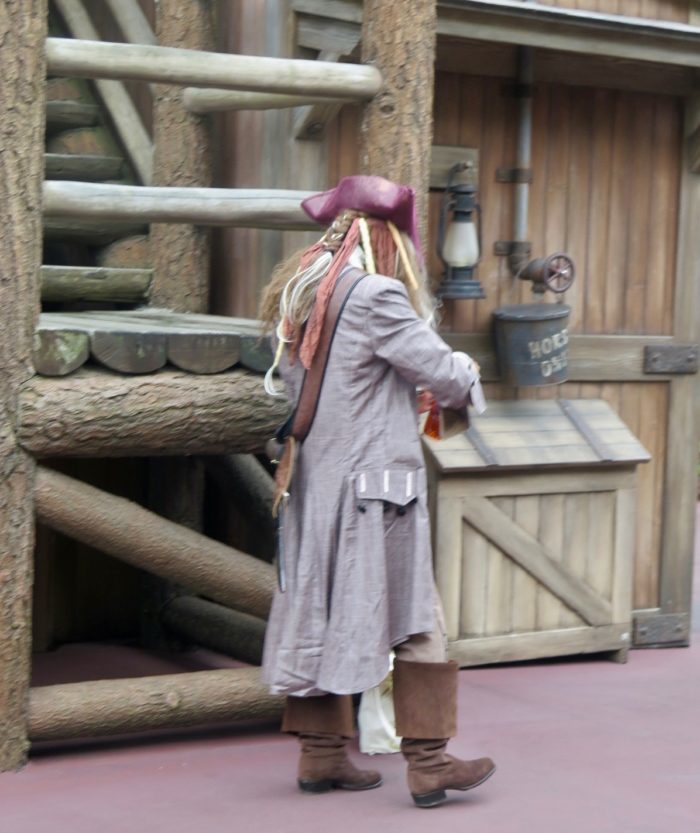 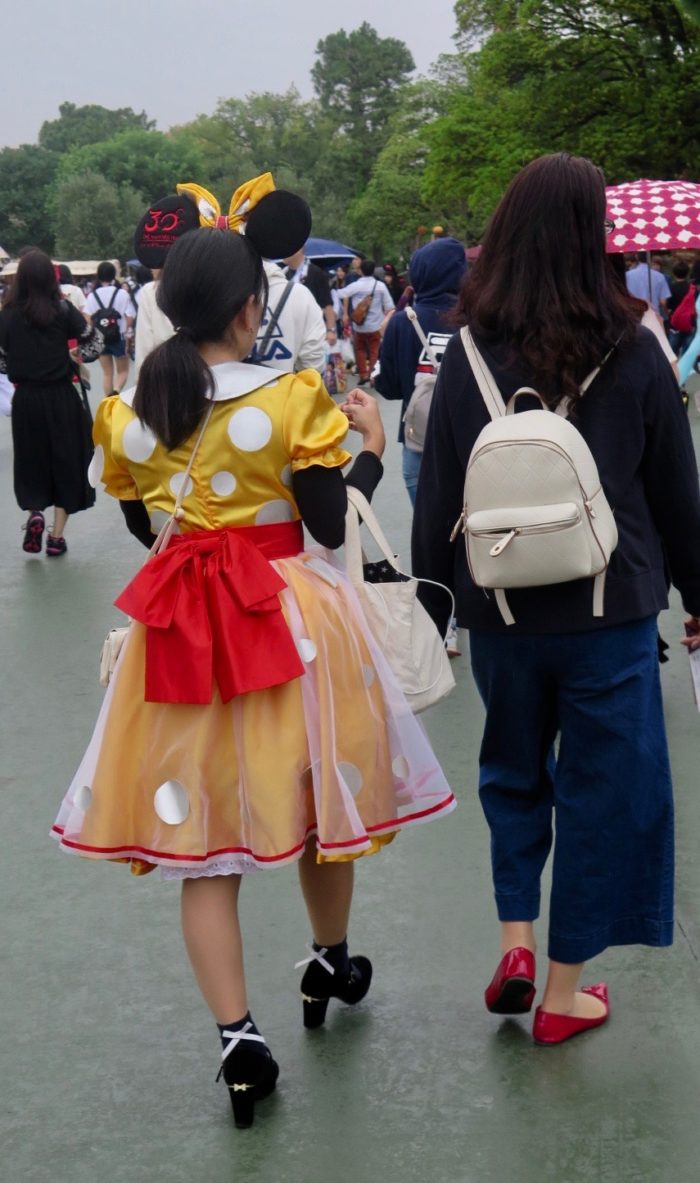 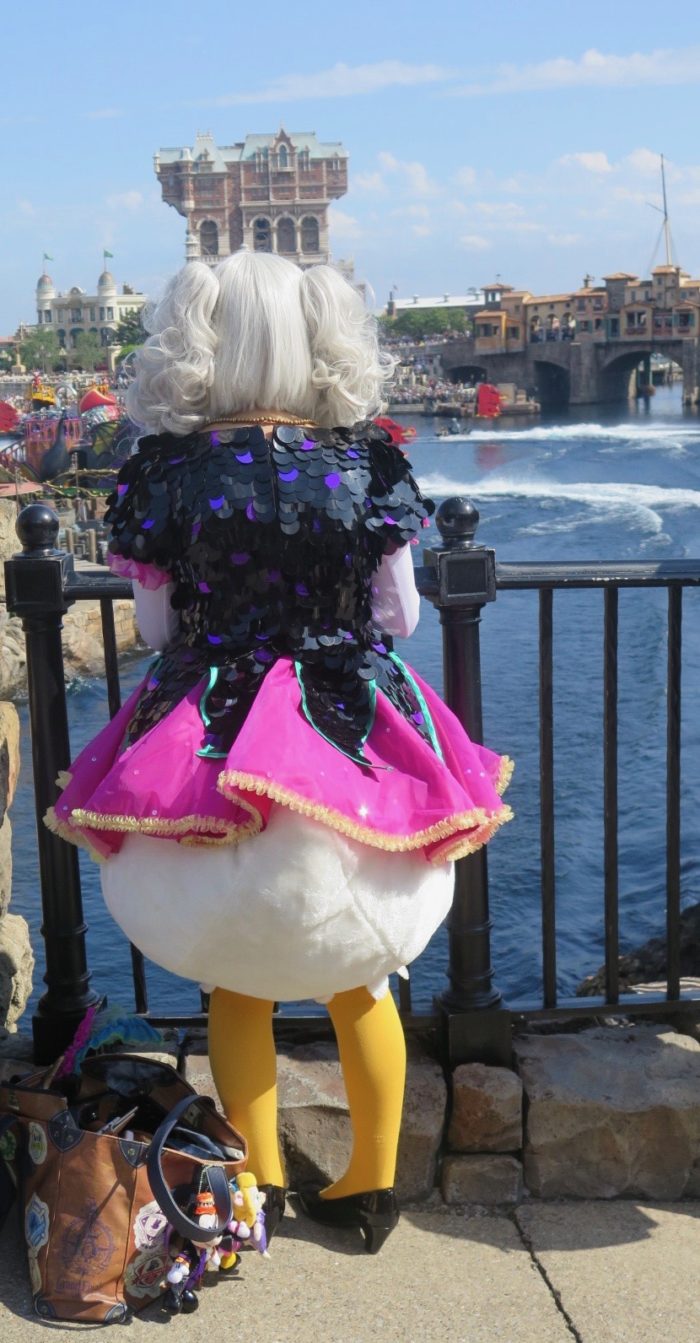 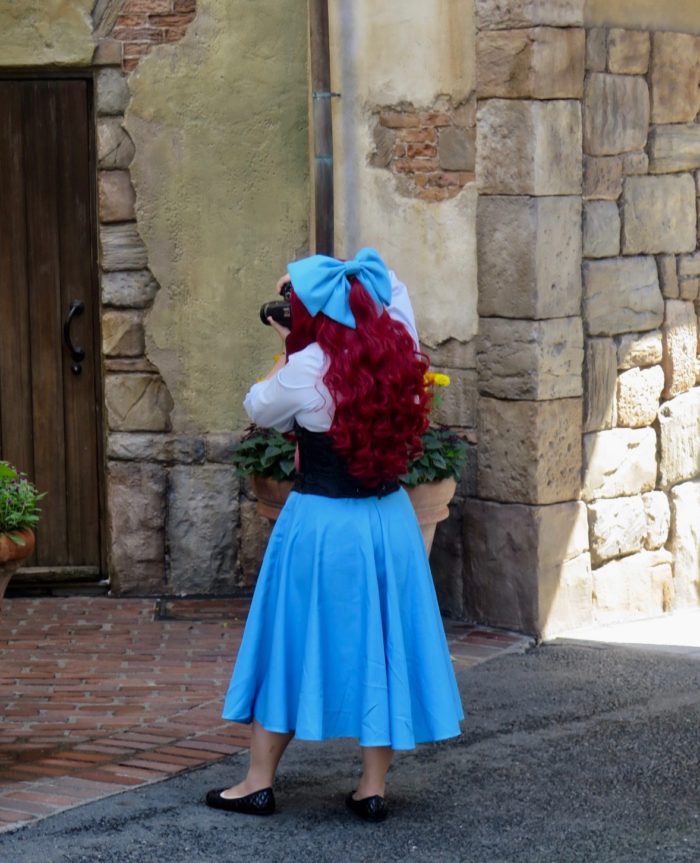 •••
The couple that cosplays together… 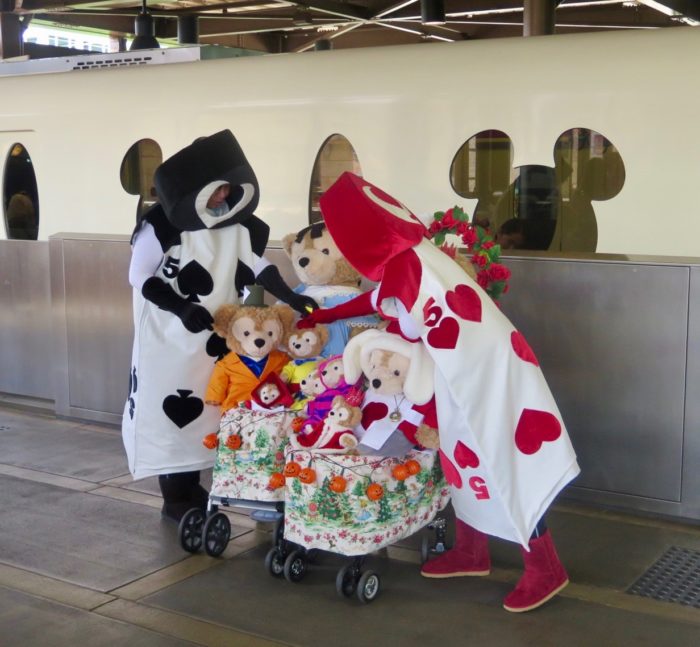 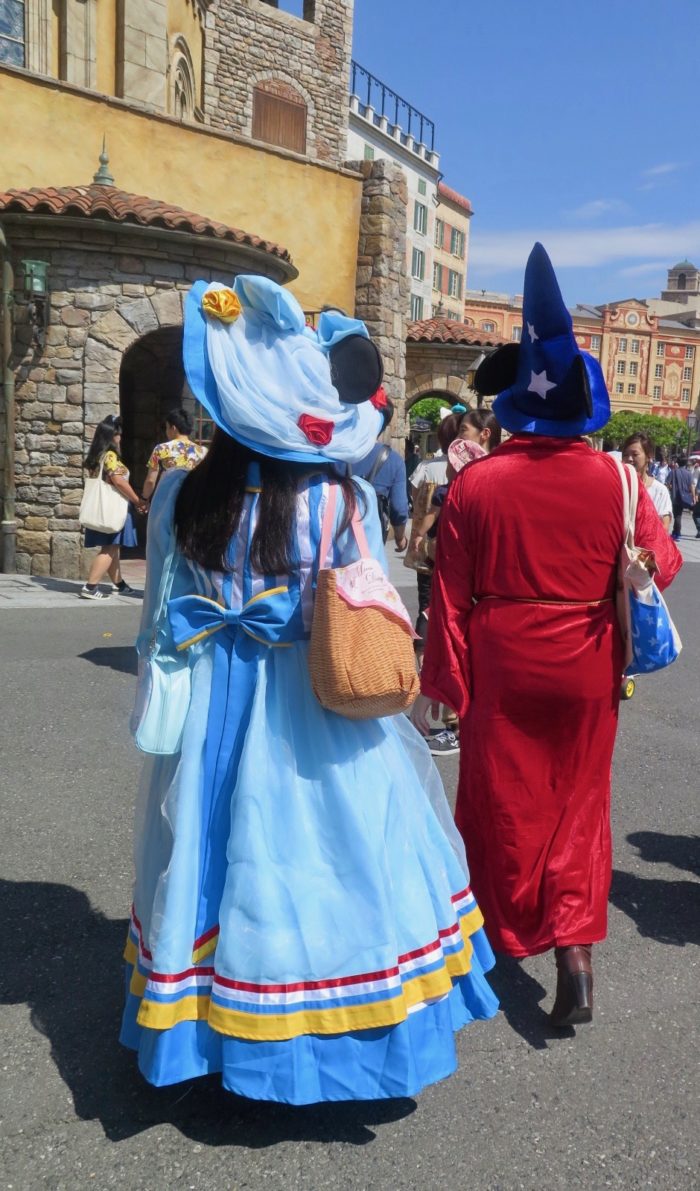 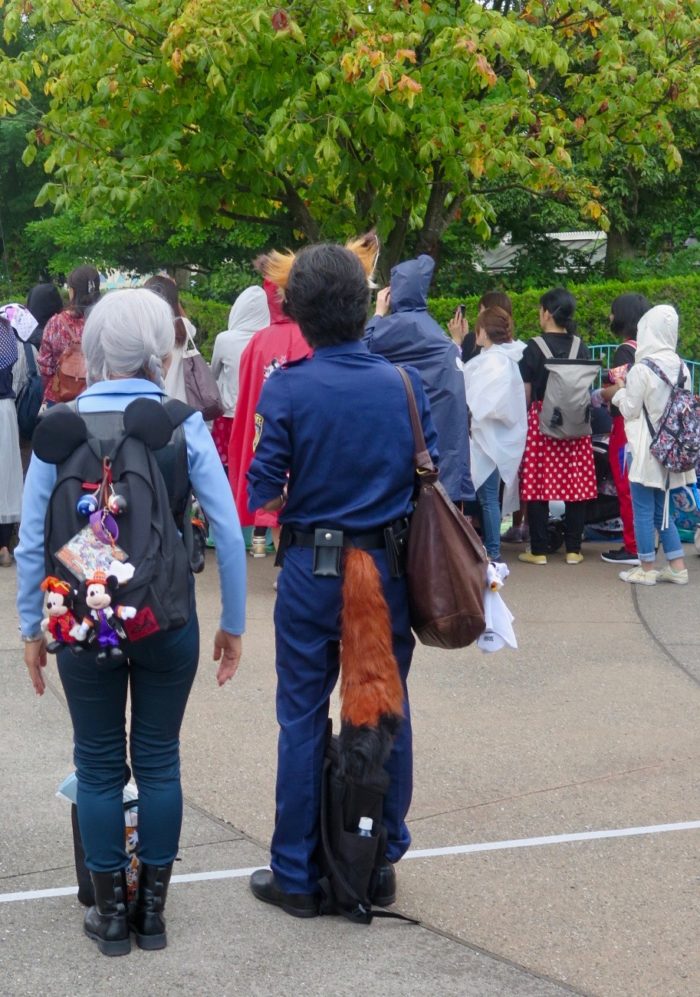 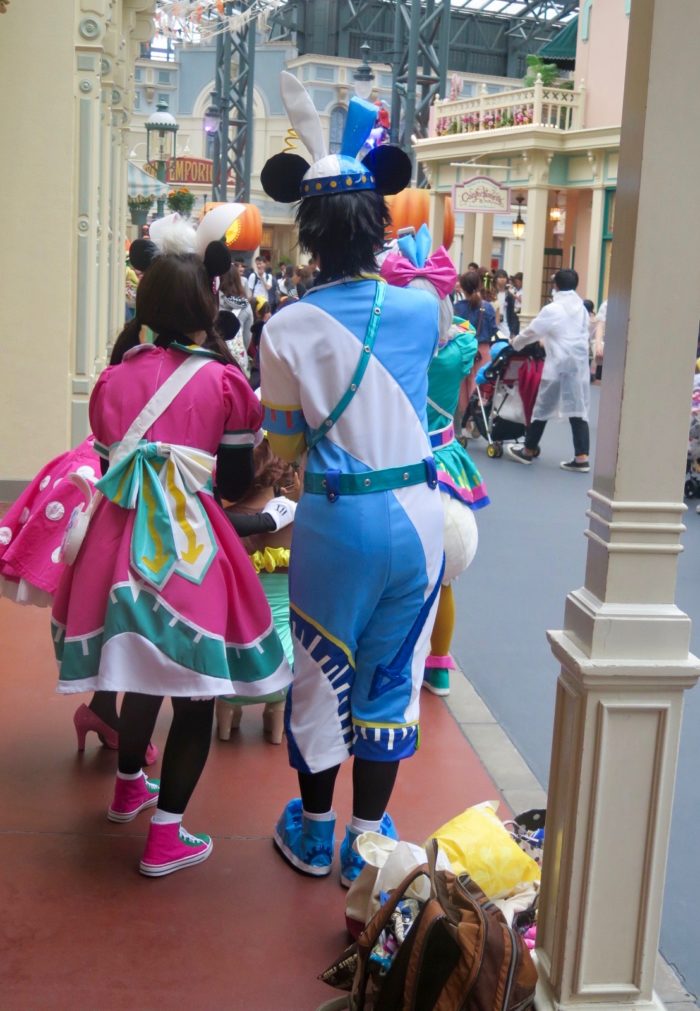 •••
Minnie’s red polka-dots are the most common costume flourish. 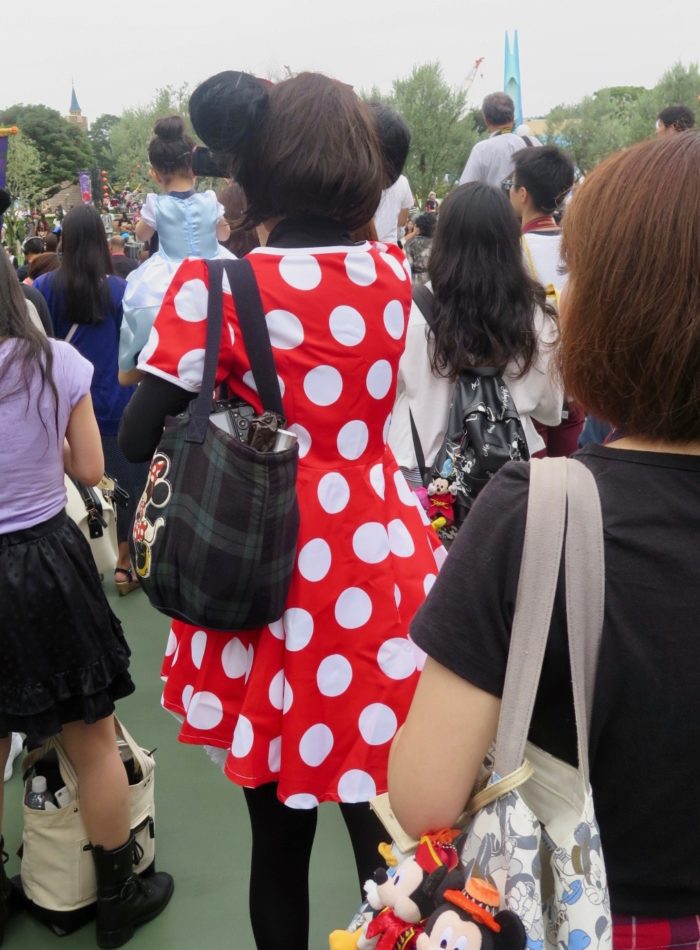 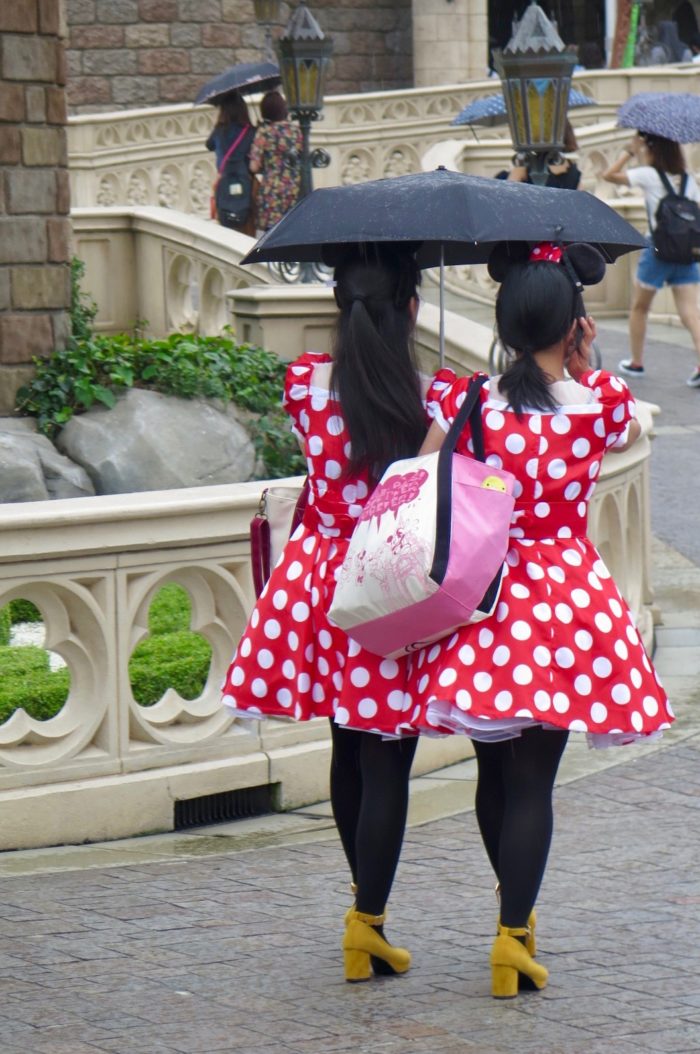 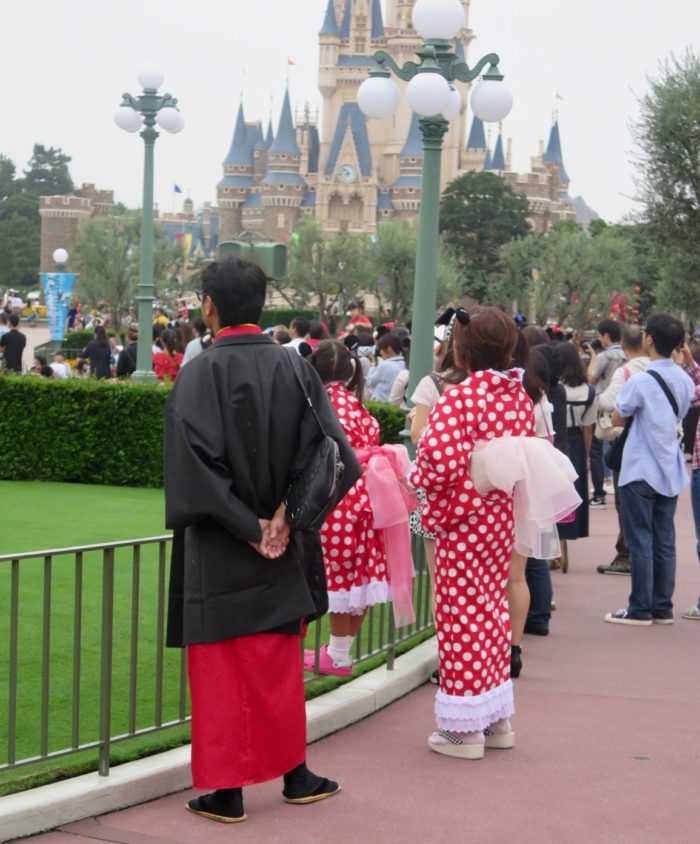 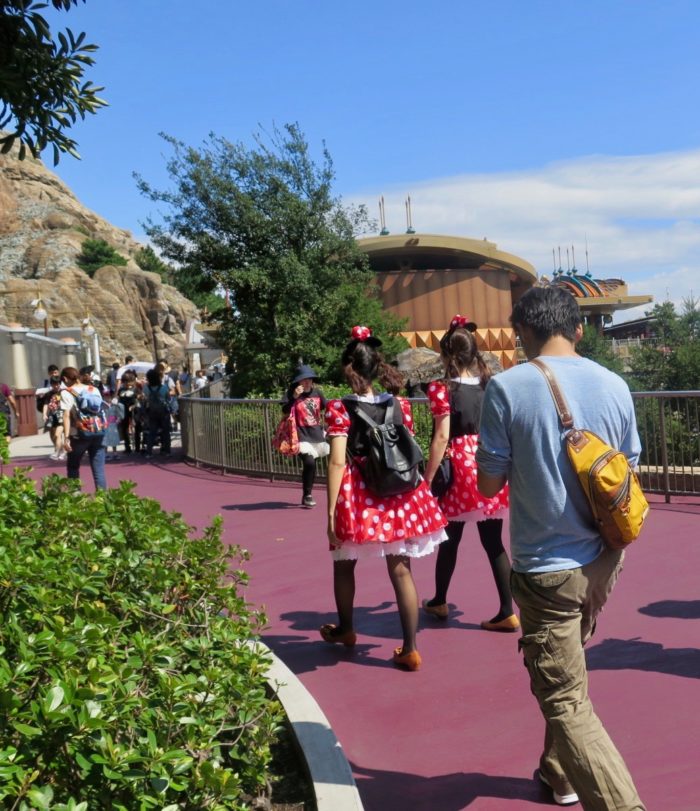 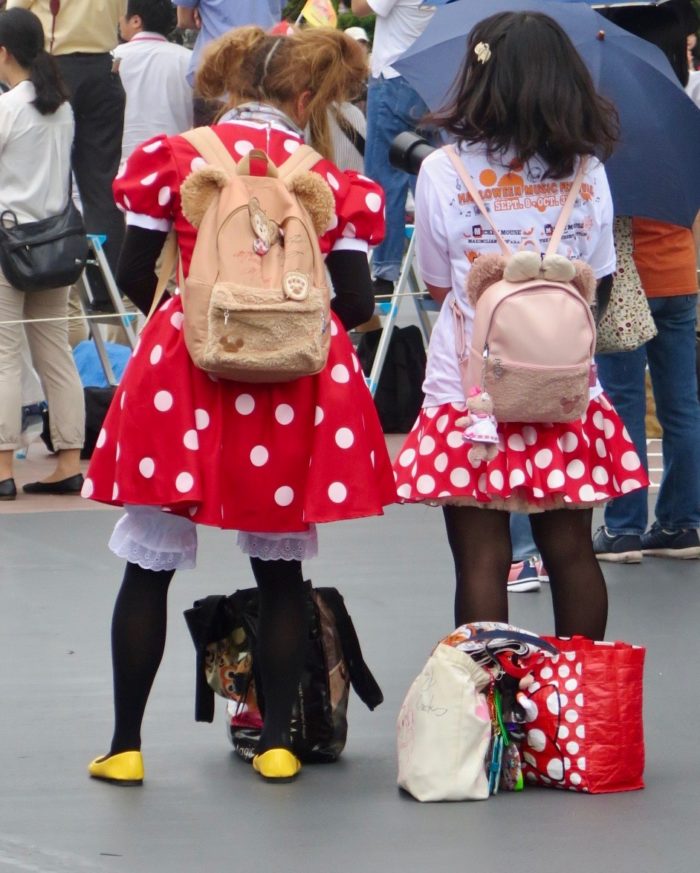 •••
At Tokyo Disney Halloween, people in and out of costume arrive in matching outfits. 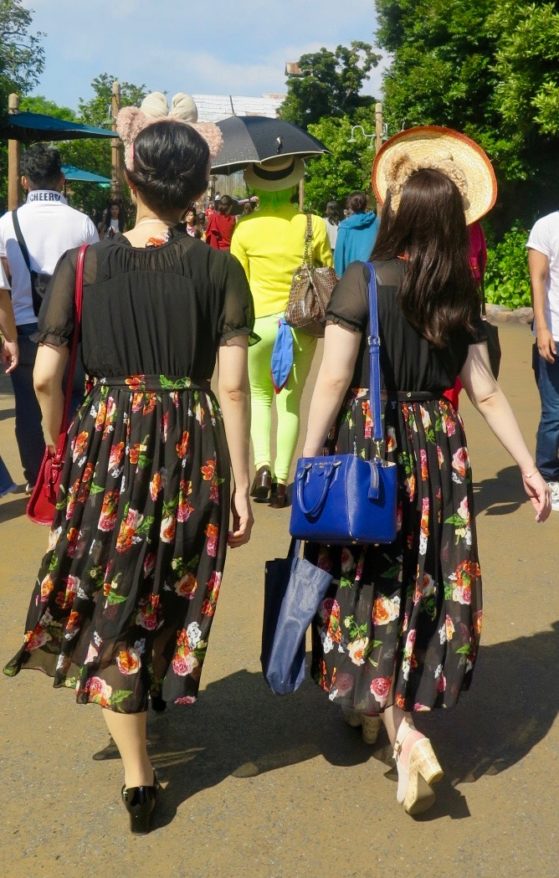 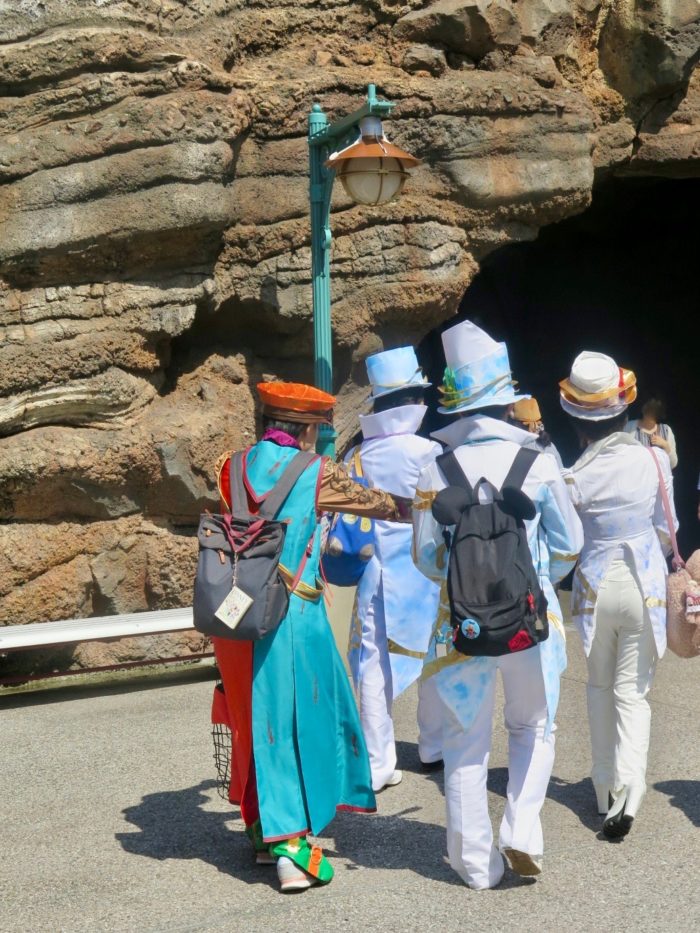 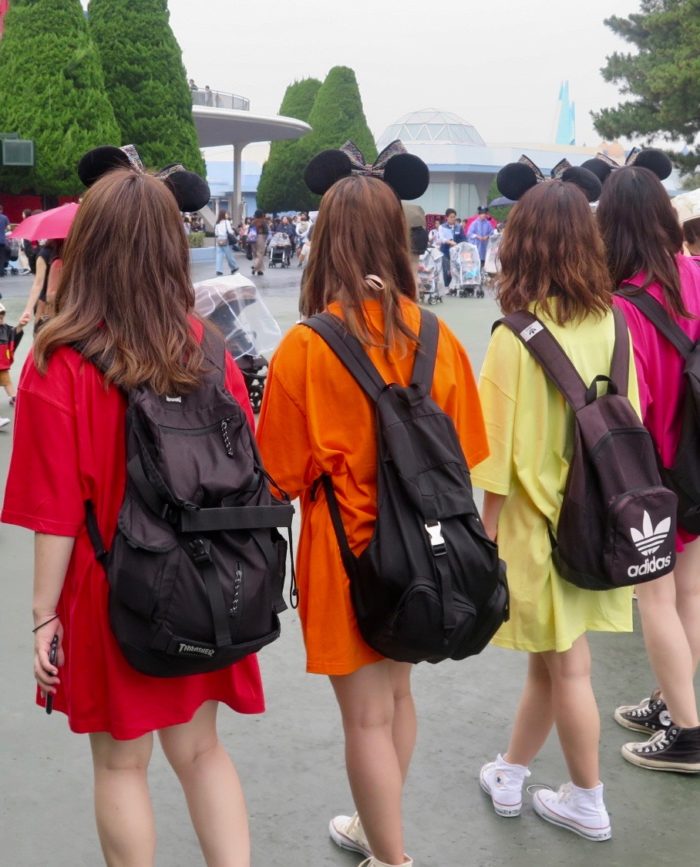 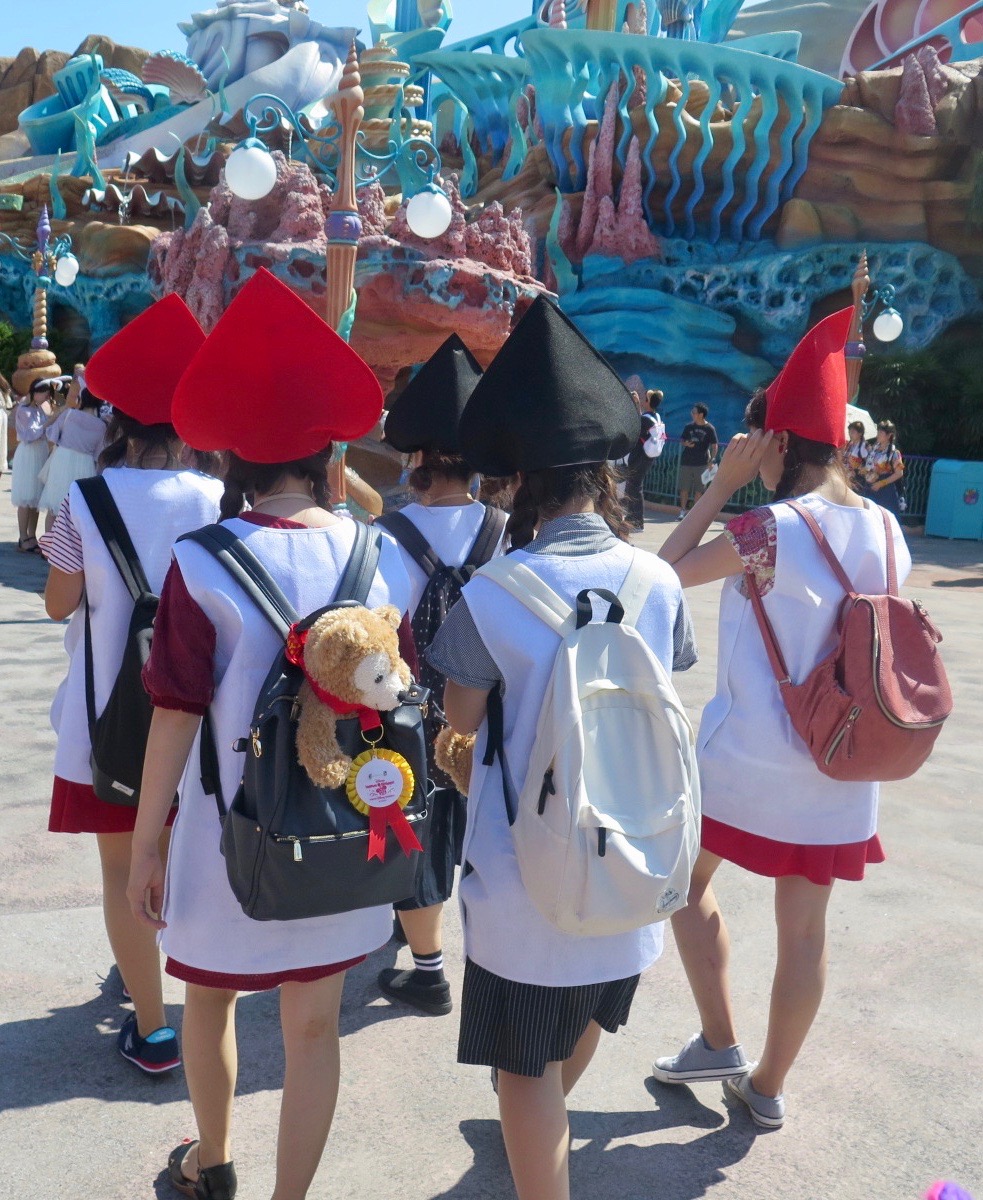 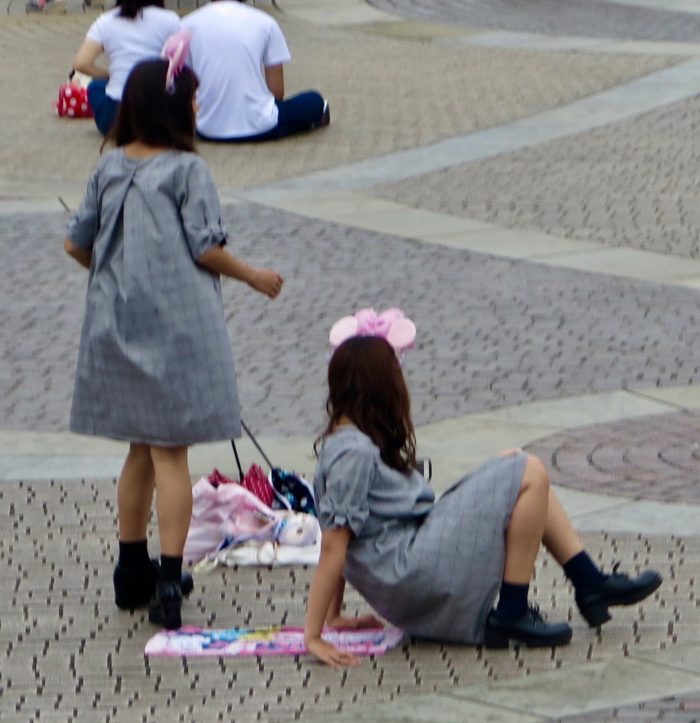 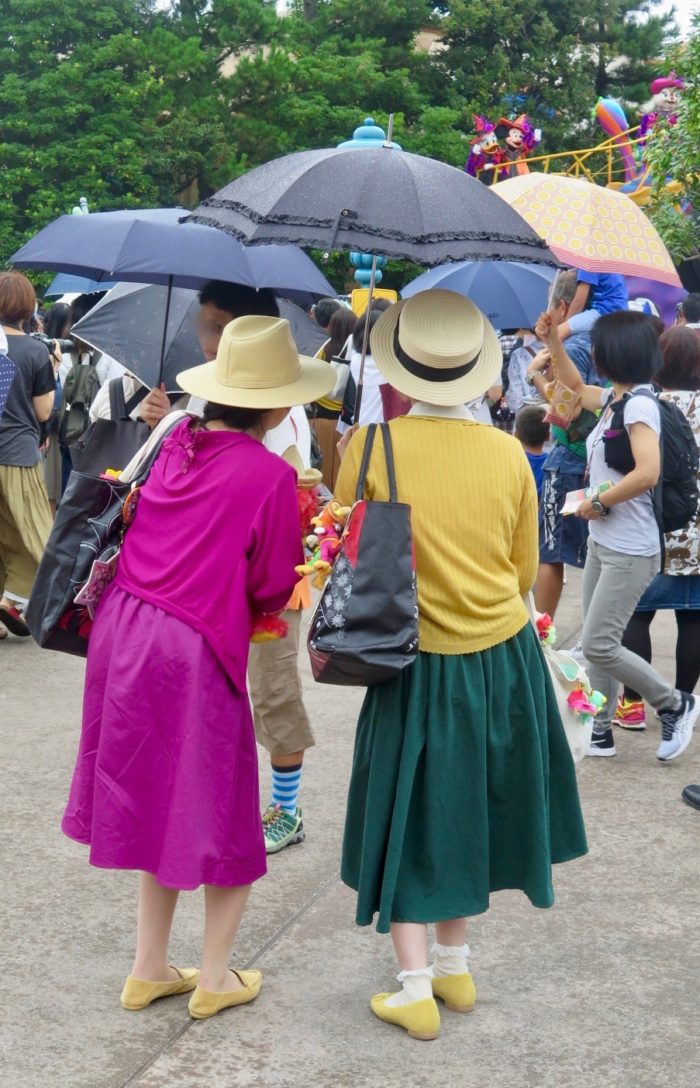 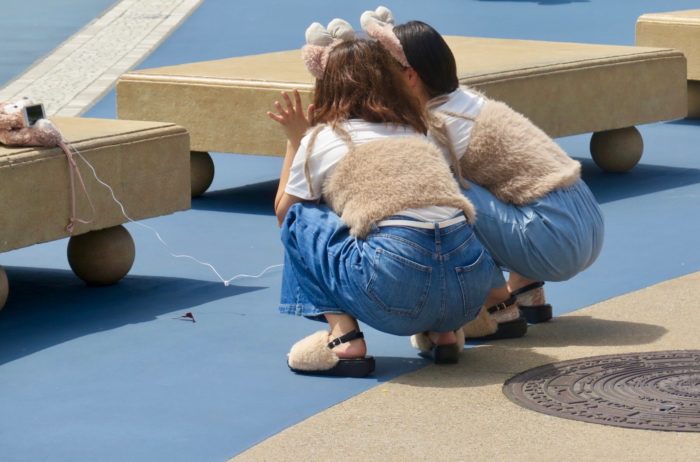 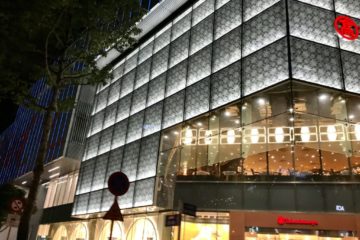