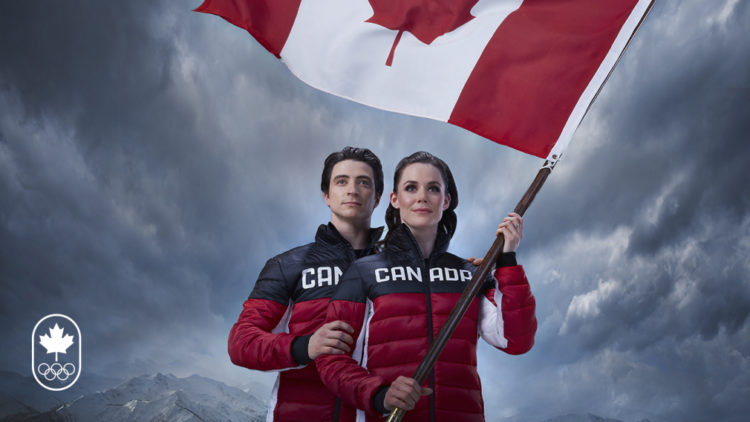 Three days in and the Canadian figure skating team was holding strong at gold medal position. Patrick Chan had bounced back to a first place finish in the men’s free. Gabrielle Daleman had secured Canada’s gold with her strong third place finish after Alina Zagitova and Mirai Nagasu.

In pursuit of Canada’s first gold at the 2018 PyeongChang Olympics, who better to cap off the win than the much-crowned flag-bearers: Tessa Virtue and Scott Moir. Was it too good to be true? They had already delivered a stunning performance in an Ice Dancing short launched by the Rolling Stones.

Would they show a similar level of impeccable technique and artistry in the Free? They would indeed, topping the field and bringing home the first gold medal for Team Canada.

Dancing together since Tessa was seven and Scott was nine, the pair are known for their willingness to take artistic and physical risks. They’ve danced to Rihanna, Pink Floyd, Funny Face, Carmen. Now, out of retirement after Sochi, the pair are dancing to Moulin Rouge’s El Tango de Roxanne –the remix of Sting’s hit with Mariano Mores’ Tanguera.

Another hero
Another mindless crime
Behind the curtain
In the pantomime

“Hopefully, we find the delicate balance where we are feeding our creative souls and we’re showcasing art that we intended to create, but we’re also appeasing the technical side of the sport,” says Virtue in Art, Love, Dance and Inspiration with Tessa Virtue, Scott Moir, a CBC Sports feature. “It’s that balance between art and athleticism where we find our renewed passion.”

Adds Moir: “What inspires me most is making people feel something, you know. I like things that are kind of raw and chill you to the bone.”

The team who support Virtue and Moir includes physical trainers, sports psychologists and husband and wife coaching team, Patrice Lauzon and Marie-France Dubreuil, who inspired their move to Montreal. “We’re so amazed by what they’ve created in Montreal,” says Tessa. “The school is unparalleled – it’s become a mecca for ice dance, and it’s a real privilege to go in every day and learn from the best of the best.”

Marie-France and choreogapher David Wilson worked sequentially with Virtue and Moir, starting with the first note of music. “Every step went to music,” explains Moir,”and that really spoke to us and made it easy as athletes and artists to be creative within the movement they were giving us. Everything has to be fueled, I think, by music at this point.”

The creative team behind Tessa and Scott’s Olympic drive includes former dance competitor and Quebec designer, Mathieu Caron. Says Virtue: “We had the pleasure of working with Mathieu Caron. He had a clear vision but was so open to our ideas and feelings.”

On Sunday, February 18th, Virtue and Moir will be bringing their artistry and athleticism to their individual Short Dance.

“Amidst the chaos of the nerves leading into the moments before our music starts, once we take the ice and our names are anonunced, usually that’s when a sense of calm and confidence comes,” says Virtue as Moir nods in agreement. “We try to have a few key words to replace any doubts…We find the connection with each other, we remind each other of the work that’s been put into it and we say ‘this is our moment.’ And when the music starts, we go to work.”